Hey there!
I have a new Norvel .061 engine with a 5x3 prop, tank, muffler, spare muffler and glow igniter lead that I'd like to part with so I'm trying to identify the version and find any suggestions on price.  I've had an SSC plane and this engine forever but I'm trying to thin my fleet.  My first goal is to get down under 30 planes, lol

I'd really appreciate any info and suggestions.  Thanks, in advance! 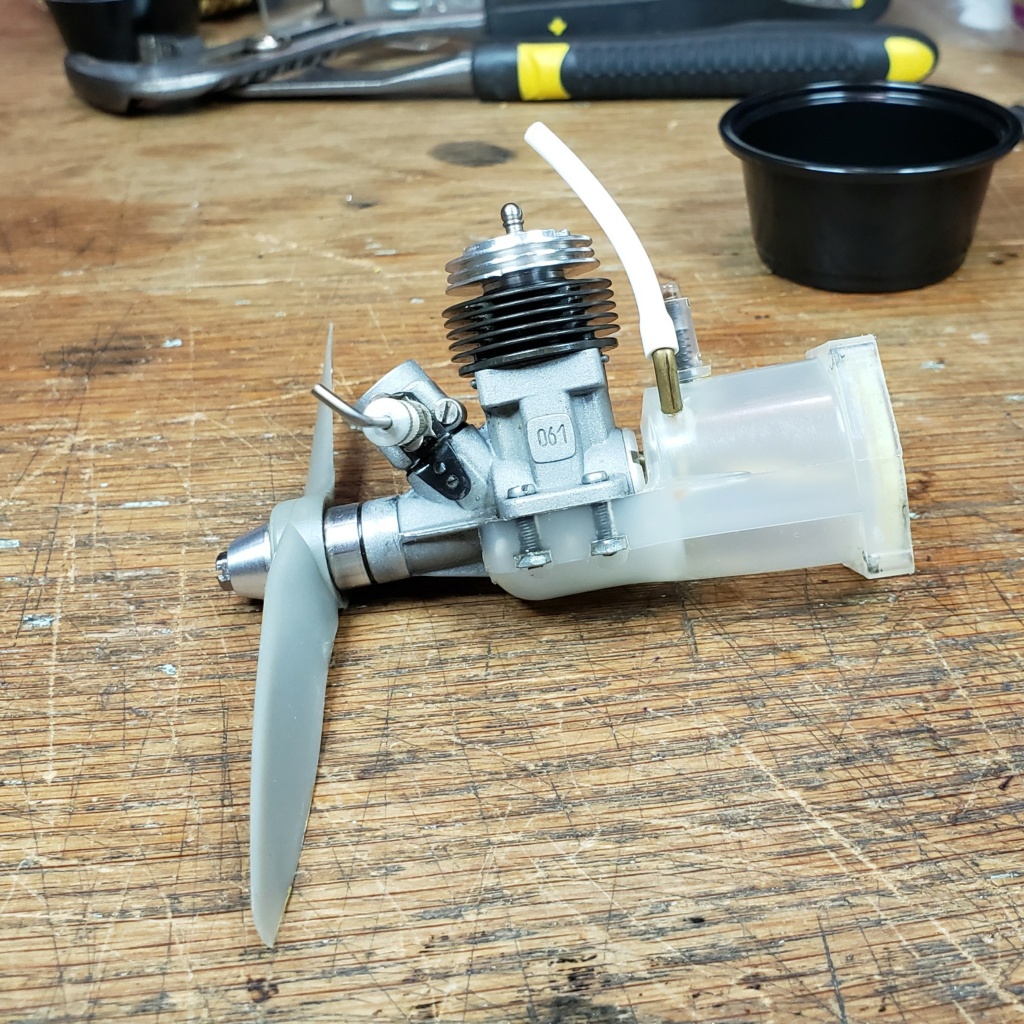 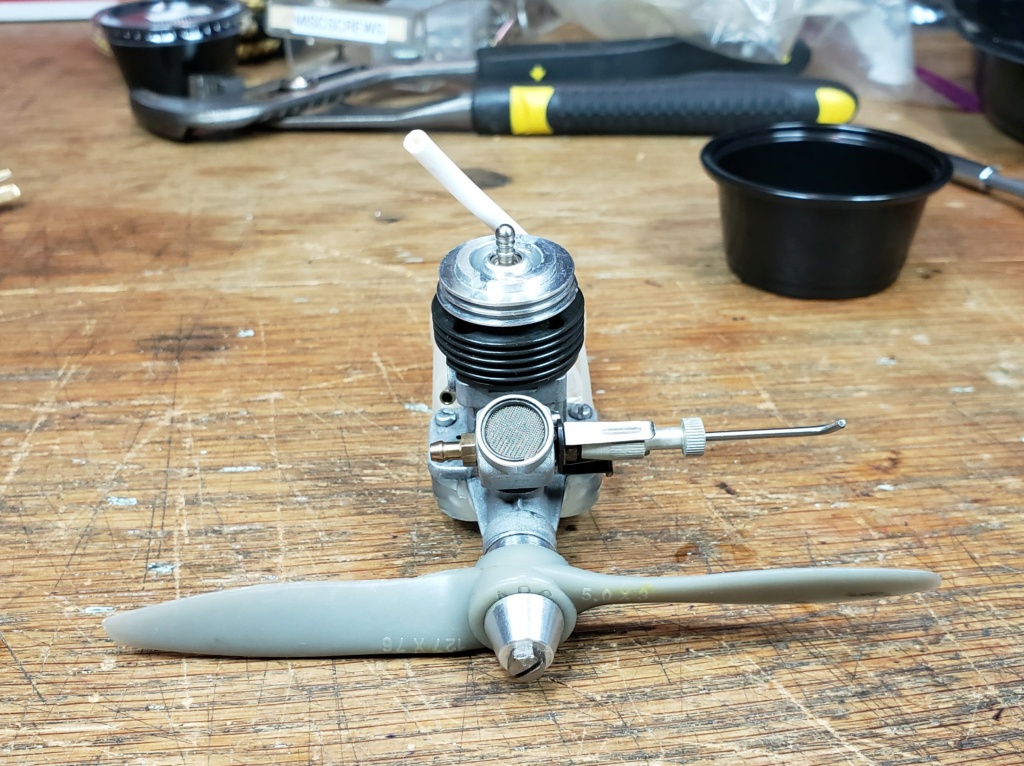 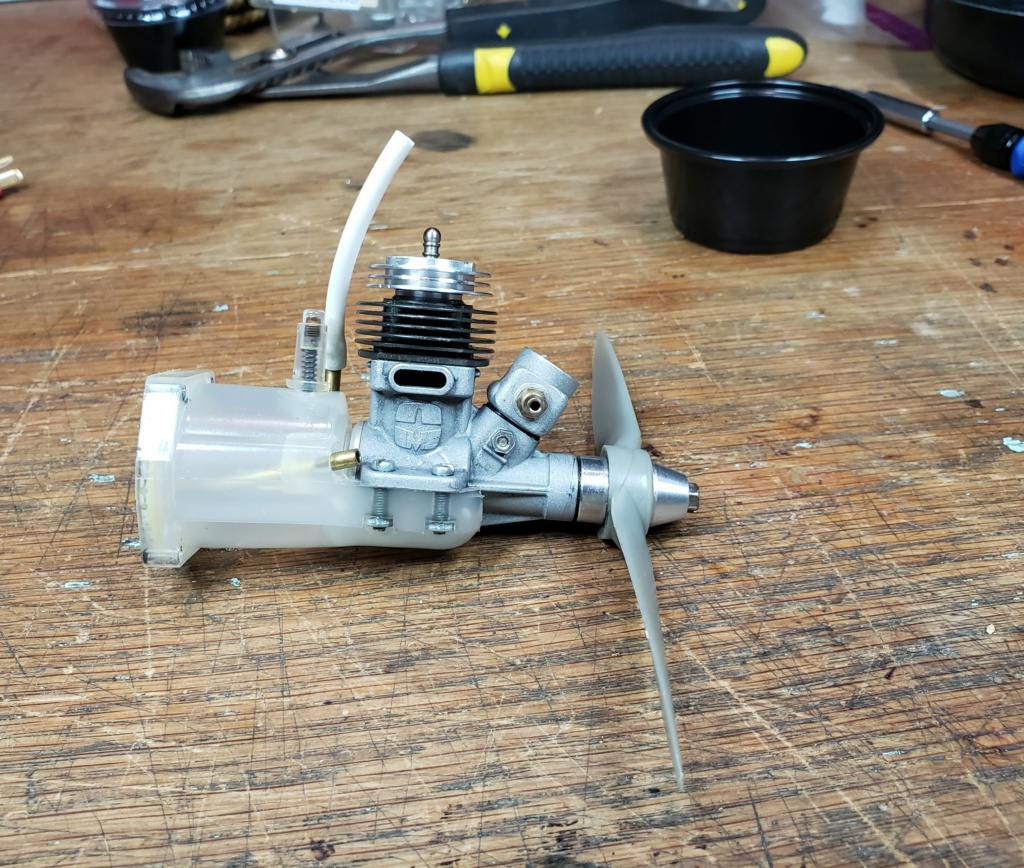 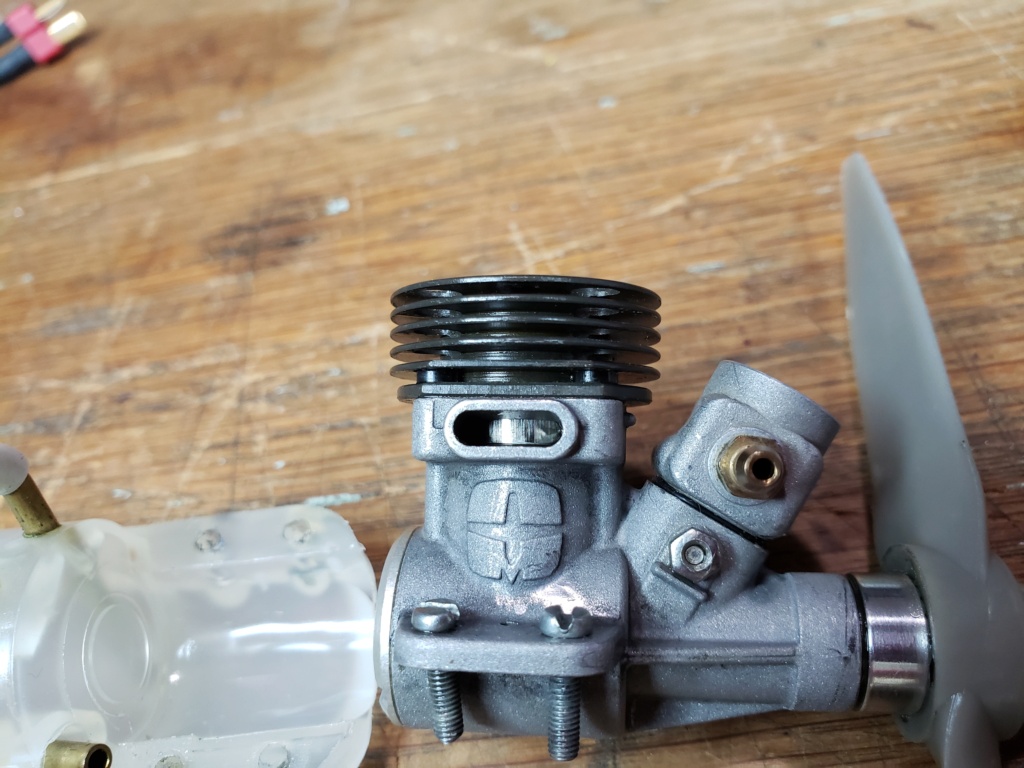 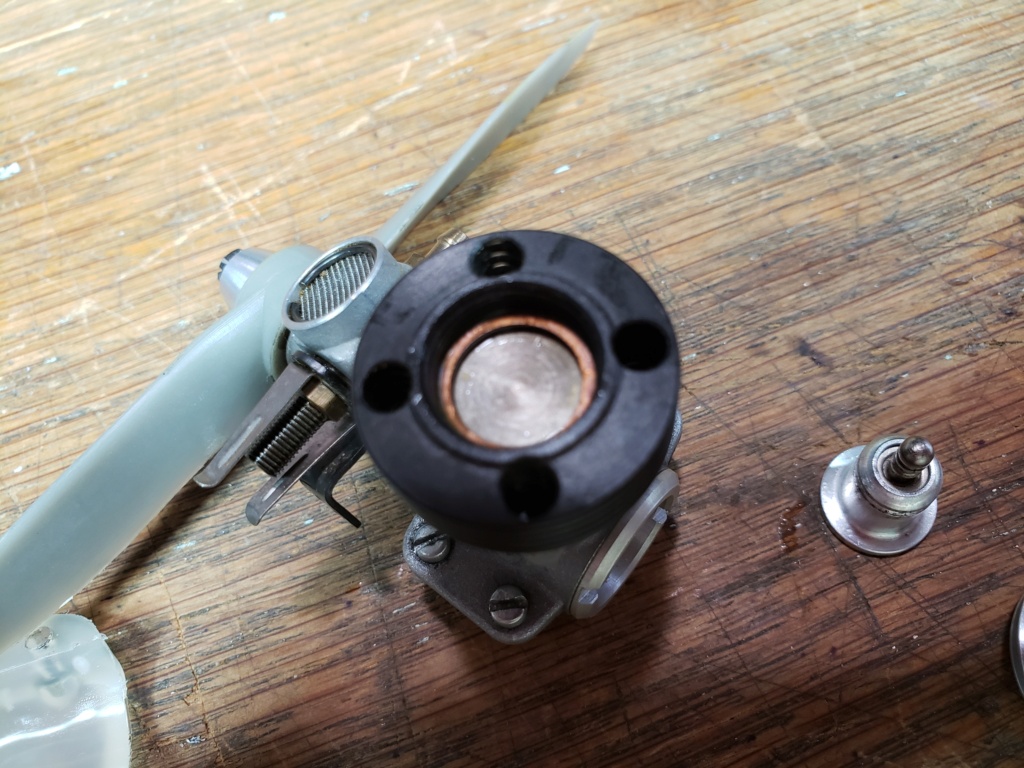 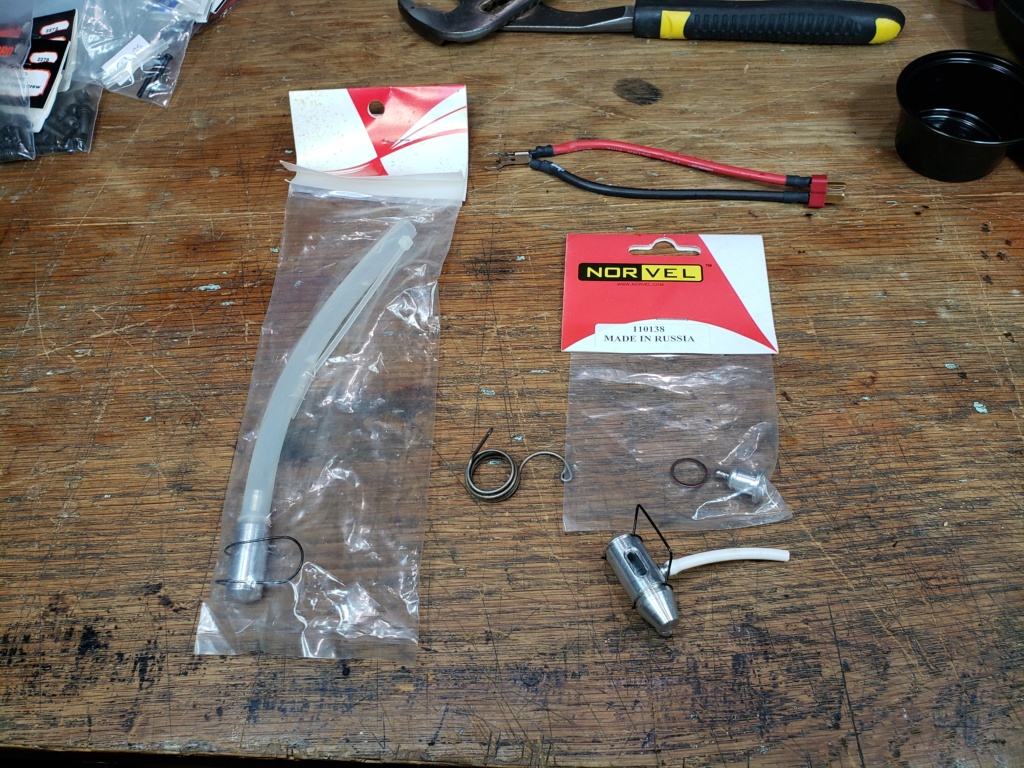 The version you have is a Rev-Lite. The porting without seeing it is a Big Mig and the tank, engine , starter spring and muffler were sold together called the Big Mig Startup. I'm not certain if the R/C version was sold like that. The glue used on the tanks fail after use.

Set the piston to BDC and count the intake ports: 3 ports for the AME; 5 ports for the Big Mig. AME's will tend to bring a higher value due to the higher performance.

The muffler in the package is an earlier version with the stinger pointing straight back; the muffler below the plug is the later version with the stinger being rotatable. Rotation can be good thing since you can direct oil away from the airframe and wing, but the endcap can sometimes take flight when the engine is running. I would usually decide where I wanted it to point and affix with a dab of JB Weld.

This engine is a later version, but not the latest that was offered -- the rear prop hub (COX calls it a drive plate) is turned on this engine; the latest version used a cast hub which was dull gray with a rough texture.

@andrew wrote:Set the piston to BDC and count the intake ports: 3 ports for the AME; 5 ports for the Big Mig.  AME's will tend to bring a higher value due to the higher performance...

Ok, besides the large port going to the muffler, there are two smaller ports towards the carb, two smaller ones towards the back and one smaller one opposite the large muffler port. So I guess that's 5 (excluding the large muffler port). So it must be a Big Mig. If that's the case, it confirms Ken's thoughts on it being a Rev-Lite and I have all the pieces that were sold as a Big Mig Startup. I'm glad you guys were willing to help. I never would've figure that out!

Pricing is hard to say.  A new Big Mig with extended tank will usually list for around $75 or more on eBay.  New from NV Engines, the current online retailer for NORVEL, is $100 without the tank.

As Ken noted, the glue that holds the circular back onto the tank will fail -- as it peels off, it looks like grass floating in the fuel.  I've used the tank as a motor mount alone, not as a fuel tank.

The muffler might bring $15 to $20, but it is an earlier version -- it all depends on who wants what at the time.  For the whole deal, I would probably list it with a $85 starting bid and see what shakes out.  The NORVEL plugs are getting hard to find, so a new plug would sweeten the deal.

For me, buying a used Big Mig or AME is risky since engine performance and durability can be significantly reduced with poor break-in, hence a new engine has a much better sale value.

Maybe some of the other guys will jump in with a better estimate for the package's value.

For me, buying a used Big Mig or AME is risky since engine performance and durability can be significantly reduced with poor break-in, hence a new engine has a much better sale value.

Thanks! That's a good point. To me, it looks like it hasn't been ran yet? The piston top and side don't show any combustion residue and I don't see any on the muffler either?

I also have what I think is a never ran MDS .18 to sell as well and I can't seem to find any comparisons to go by either. It's the only MDS engine I've seen and I've got to say, I'm really impressed by the build. Don't know the reputation of them but it's really a solidly built engine.

The MDS .18 engines have been selling really cheap on ebay for years, you could get a NIB one for about $20-30 (if I remember correctly). They have a little bad reputation but they can work well. The quality control is not the best and you can get a dud if you are unlucky. I have one that is too tight in the bearings, I was never able to get rid of that and it would never really rev up properly. Otherwise you treat them as a proper ABC engines that are set-up for 0%nitro fuel. So add an extra head-shim or two, pre-heat the cylinder and run them in on a small prop (7x4). Once run-in they will give around 20krpm on a 7x4 prop, which is on pair with most regular .15 engines (e.g. the MVVS .15 or the ASP .15XLS).