Tow Motor DIY-style...this should tow it all

Tow Motor DIY-style...this should tow it all

Some of you know model airplanes is a small hobby for me (chuckles...small in size). My vehicles are a big hobby. The most in-depth big hobby job was rebuilding my Honda CB1100F. This particular job was done in the living room of the apartment I lived in up in Boston, MA (a couple of pictures exist). My wife met me while the bike was still in pieces on several book cases lining the living room walls (her primary concern was that it might be a bike with "fringe" aka Harley).

Anyway, the next big hobby job was an old Ford Ranger. While the bike could be pushed around as needed while on wheels, the Ranger was large enough that I turned our old Celica into a tow motor (most convenient way to move the truck around a South Georgia yard). Oh, one picture exists of that project.

The Porsche doesn't like being seen stripped, so no pictures exist for much of the maintenance work it has had. I've been places on her that no one has seen since she was first put together.

My TR6 has several "maintenance record" pictures over time, and unfortunately the last few are of the day "JR" tried to take flight in it (the landing was tough on all concerned, and worse for the car than the occupants, thank God Almighty!). It has been just over two years since that last drive. In the last few months, I've been busy with preparing the back yard pole shed with a hard-point engine pulling bay, moving around the TR6 by hand (pushing and cajoling my "conscripts" into assistance), and building a drive train moving dolly for the four engine/transmission sets I have.

I'm learning I'm not as young as I used to be. It IS getting harder to move this stuff around, which has prompted me to build another tow motor. The Craftsman lawnmower has been pressed into service, but the tongue plate meant for supporting a Vac-Bag system started dropping down. Apparently it didn't like having 150 pounds of anything hanging on it.

So, for the fruits of my labor over the last week, may I present "Tow Motor Jr." My own family isn't impressed, but I'm sure you guys may appreciate this. Keep in mind while this is your typical Craftsman 42 inch rider mower, it does have a unique engine in that the older single cylinder 17 hp Kohler was replaced with a much bigger 22 HP Kohler V-twin from a 46" mower. There were engineering decisions to be made in order to get the engine to work in the "little brother" frame...but that is a different subject. Here is the back end: 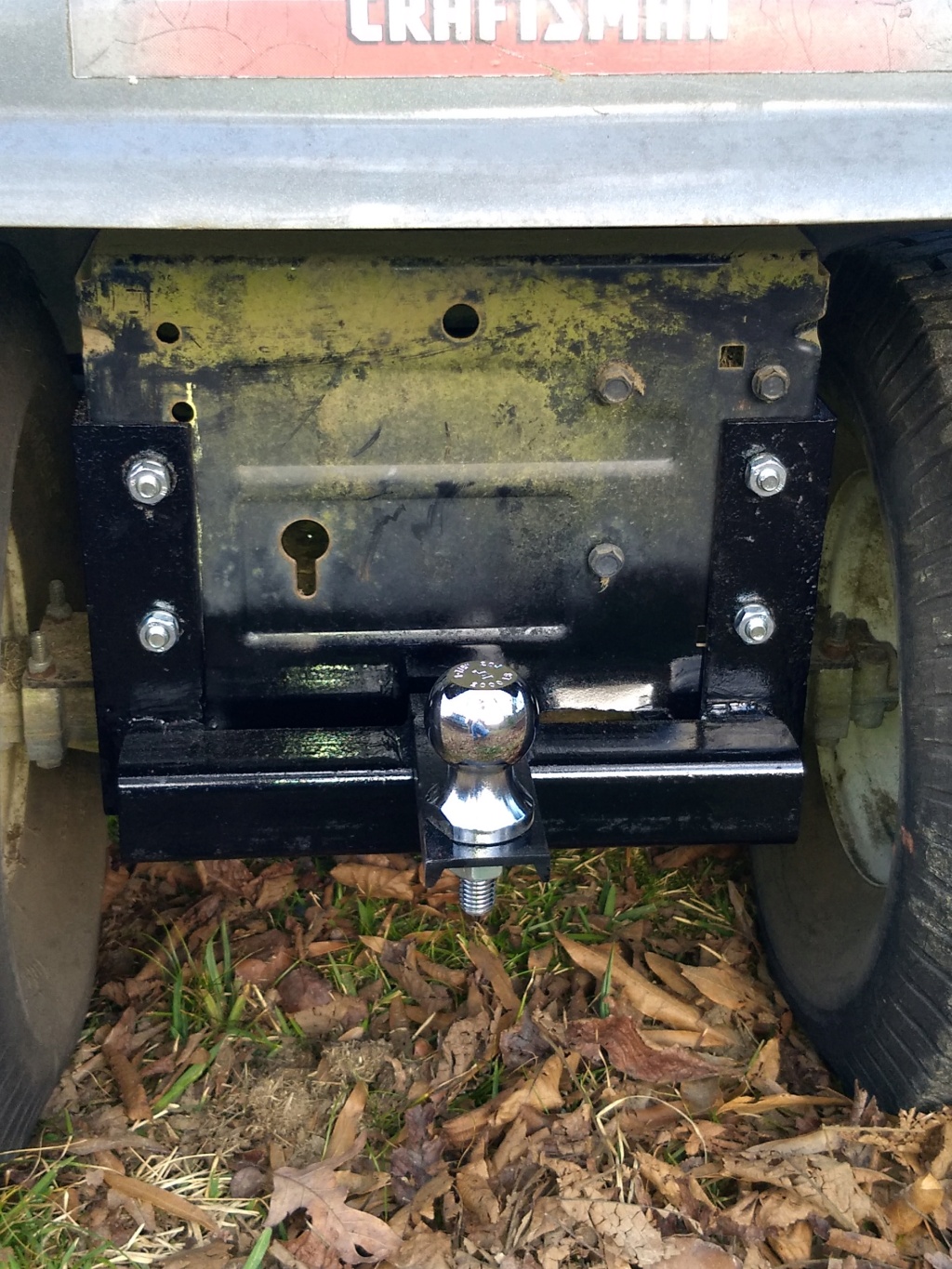 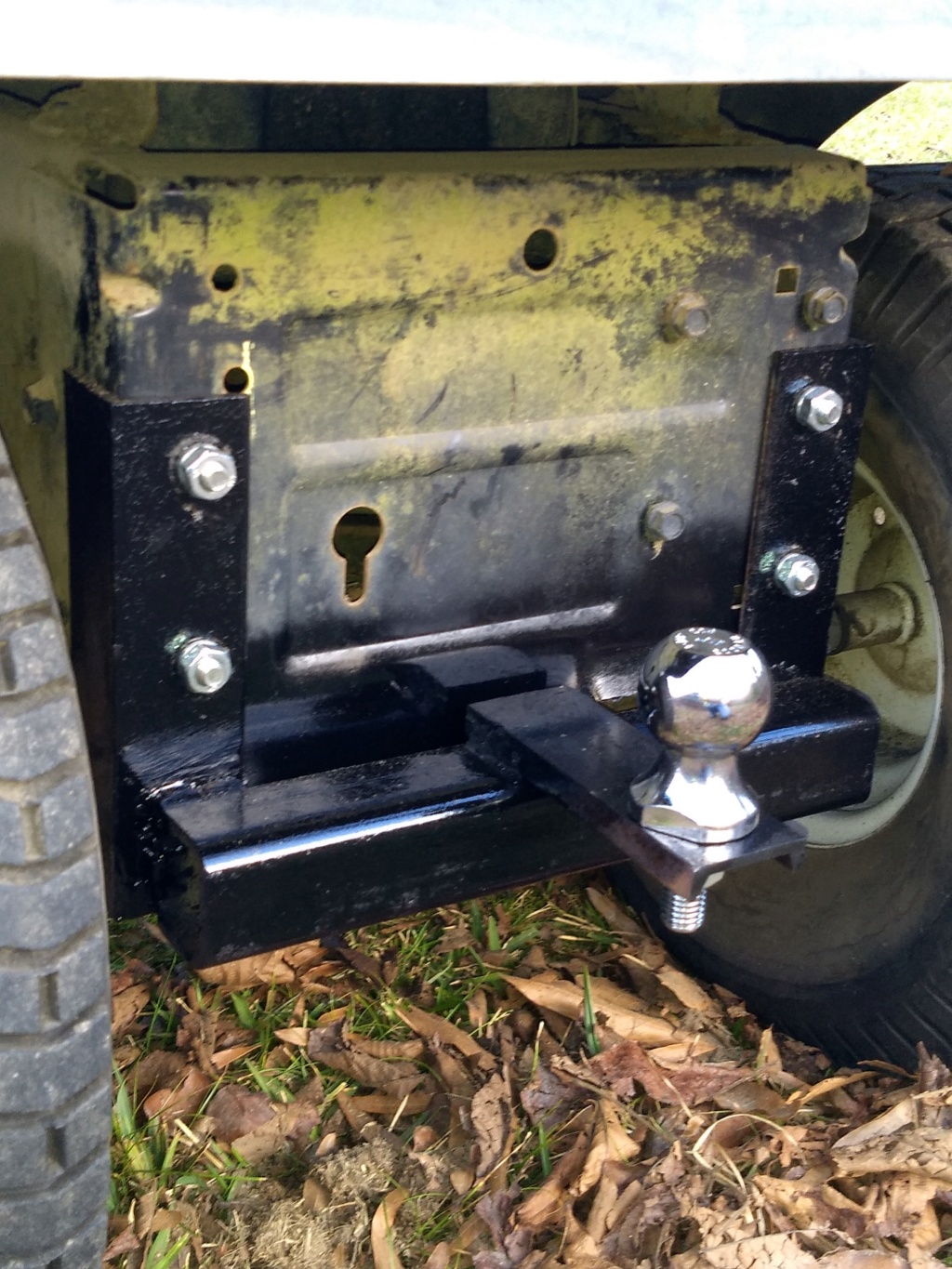 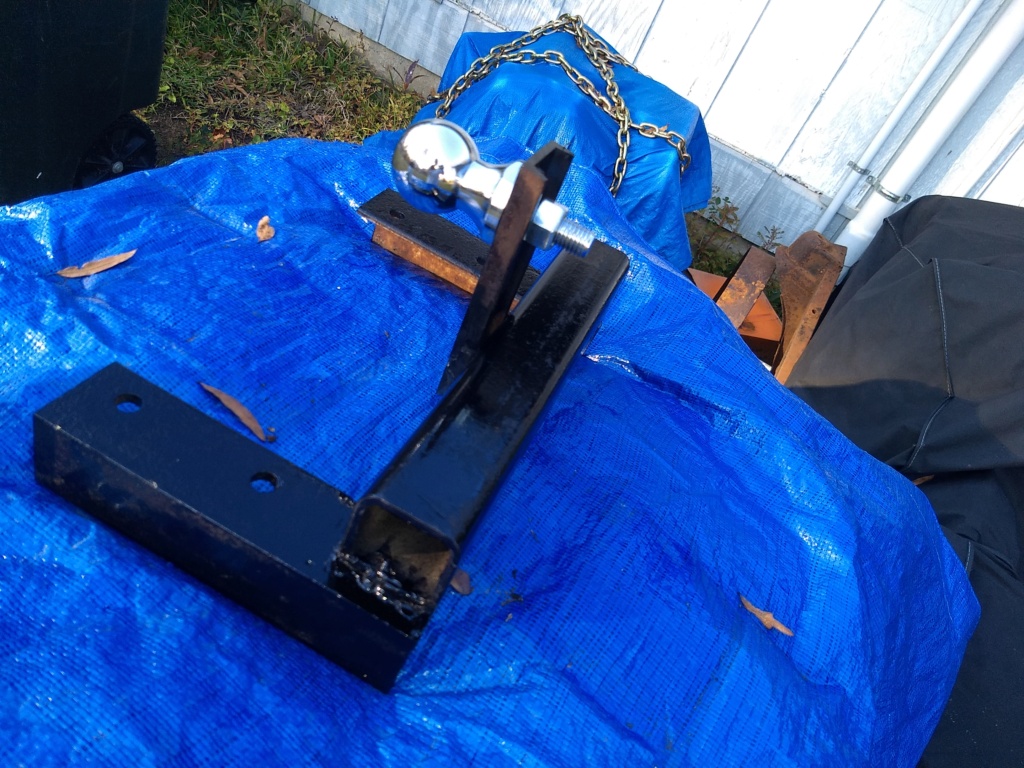 Fantastic ! If I ever needed a reason to buy a welder....that would be the project I'd do first; Re-inforce the rear attachment plate on my Simplicity Lawn mower. Looks very similar to what you show. My tow behind grass catcher and Lawn Roller have stressed the plate to the max. That tube and angle bracket looks like it should hold anything (reasonable) you hook to it. Good Job!

I to use the lawn tractor as a tug......well not really, it is front mounted receiver so it is a pusher, mainly for the Aluminum car trailer.

Down side of front mount is visibility when mowing, it sticks out 8 inches in front, I used to run it into the occasional tree when turning "just in time"