What is that ? I never heard about that engine. 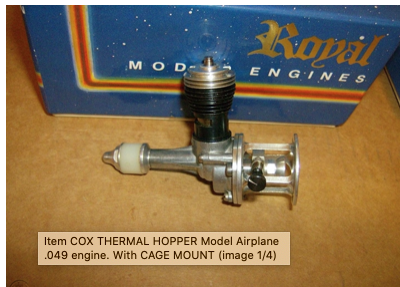 latole, here is an engine review by H.R. Warring from the Feb. 1954 Aeromodeller magazine:

These will give you some insight. The engine was short lived, with other engines continuing in its steed. I don't know if the engine was ever sold mounted on a Cox RTF plane. It would be understandable to be obsoleted in short order. The machining of the engine mount was a work of art, but labor intensive. To be competitive, Leroy Cox did steps to lessen costs but still keep the quality up on his engines.

For an early reed valve engine, it was a decent engine. Warren found it put out 15,500 rpm on a 6x3 prop, which is sparkling performance, akin in performance to the later Golden Bee. I don't know the fuel he used, my guess it was probably 15% nitro, which is the minimum standard for Cox engines for decent sport flight performance. The MA article obtained 0.066 hp at 17,200 rpm on 25% nitro fuel, which is quite good for a reed valve. Author is not stated, but style of writing appears it might be Peter Chinn's.

It would have been a suitable engine for Hal DeBolt's 1953 DeMECo 34" Livewire Kitten R/C kit aircraft.

Thank you , link is very interesting.

latole, I just edited my post to include another engine review above. I think you will also enjoy reading it. I was wrong, after looking at the numbers for the Babe Bee, it appears that the earlier Thermal Hopper's performance to be closer to the Golden Bee.