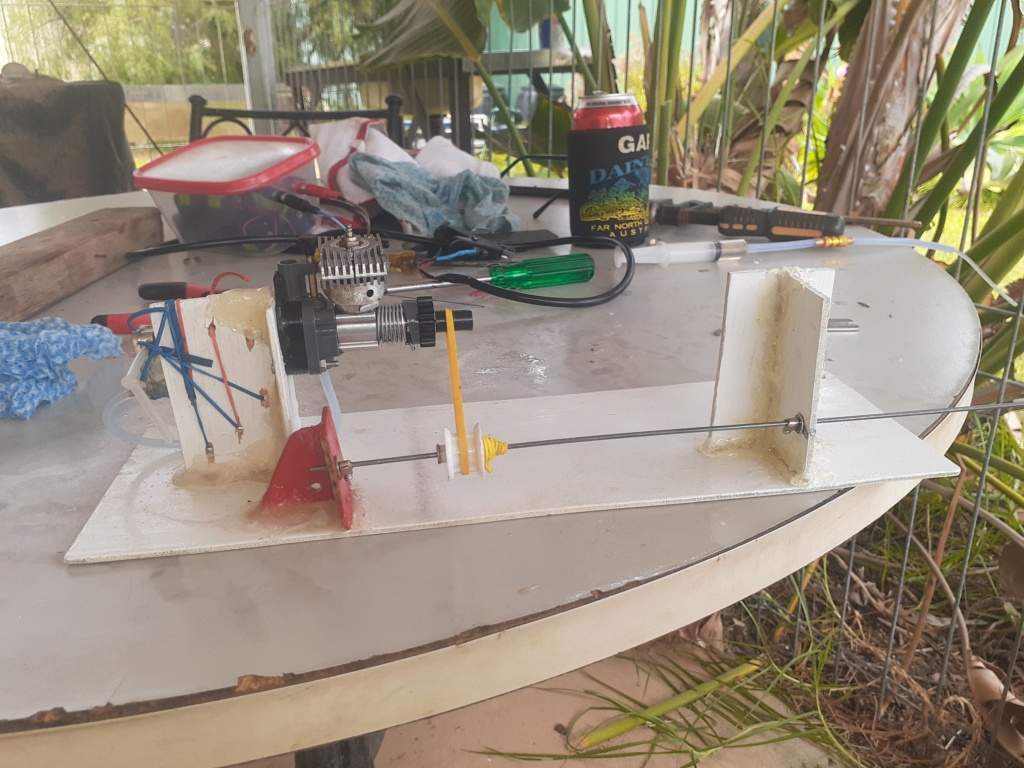 After building my two RC Air Cars which have done a huge amount of work over the Christmas break I decided I will build myself a "from scratch" Car with a Cox 049 engine driving a rear axle. This Jig I setup was just to mount the engine and an axle and test out if the heatsink would work. And it works great!

I have used the Cox glow plug adapter with an external glow plug deliberately to try and get the revs down, and the muffler helps with that a bit. After the photo I added an OS 10G RC Carby to the horseshoe inlet and put a servo on the test bench.

The engine ran in nicely, I just start it by turning the hub via the slot in the front with a Cox engine tool. Lol. works no problems. I glued a rubber band to the end of the hub after this to build up a round ridge at the end of the hub so as that the drive rubber band would stay on. for this with beady eyes. Lol. The cog,sprocket up against the end of the engine held on by the hub is nothing to do with drive. I had it lying around and it did fit. HaHaHa. So it just holds the spring and stuff on. :-)

The drive gear/pulley fixed to the axle has been modified a lot since the photo to increase its diameter as I need to get the low end wheel speed right down.

Once a build a prototype quick and dirty car using this drive system, I will start thinking how I am going to do an axle that is driven through a straight shaft from the Cox engine and a bevel gear sort of setup on the axle.

The new car is well on the way to running on the street or a bitumen tennis court or such so I will post some photos of it once its complete. It is running in a real basic way on the street out the front of the shack I now live in

, but needs some mods and balancing and weight added to stop the front end pushing so hard. Im also working at ways to get the revs on the Cox able to come right right down and be stable, I think I might be starting to try to get them too low and have to work with gearing to get the base low speed.

I am in Yabby you come up with some Wild and Crazy things and that is what makes this world go around ! Is that hot glue your using just wondering if so is it fuel proof ?

thanks for the laugh and positive comments!

started my day very nicely. Lol. Its not hot glue, its really really cheap epoxy thats just blobbed all over the place. I thought about hot glue and my missus has a hot glue gun.

no, maybe not, it could be life shortening using her hot glue gun. Lol.

I have watched much of your car development david and very much admire your engineering skills and the models you produce!

Mine will never end up so finished and nice as yours thats for sure. Lol. There are very very few things I have started and finished in my life! much to the annoyance of some people. I like learning and understanding and trying to see if I can implement what is normally a complex technical thing using really simple tools and tech, just to see that the theory and my understanding is correct or even wrong and then I have to go read, lookup things, try again and learn. It serves no value other than it makes me happy and I like sharing my stuff for the few that understand and can have a laugh at it for what it is.

Ill post some more of it soon with pictures. I think youll get a laugh at the way the car has been built. Lol.

Yes, O ring and a V shaped pully would reduce slipping and give more grip.

Eagle eyed Eric picked up on the hot glue/epoxy err.......mess that I completely missed.

Can't wait to see your car.