I am SUCH a liar!

I am SUCH a liar!

I said after the last one, I was putting away the Cricut Maker machine and just build everything I’d cut before.  Well, as I was getting ready to start building my Skyray 110 MK II, I started thinking about the park just down the road from my apartment.  There are a bunch of soccer fields that seldom get used, and I asked one of the locals who controls the park.  He said the parks are pretty much open to anyone, and lots of guys fly drones there, so they wouldn’t care if I flew control line when there was no one using the soccer fields.

I figured I’d start flying there when it’s nice, but I’m not sure if anyone would be unhappy with a Cox screaming.  Some people just have no taste.  So, I thought I could make the Skyray electric.  110 square inches are good for a reedie engine, but seems a little anemic to lug all those electrics around.  So, I figured I’d up the squares a little for an electric park plane.  I pulled the .svg and changed the chord from 4.75” to 5.75”.  This gave almost a 50% increase in wing area. 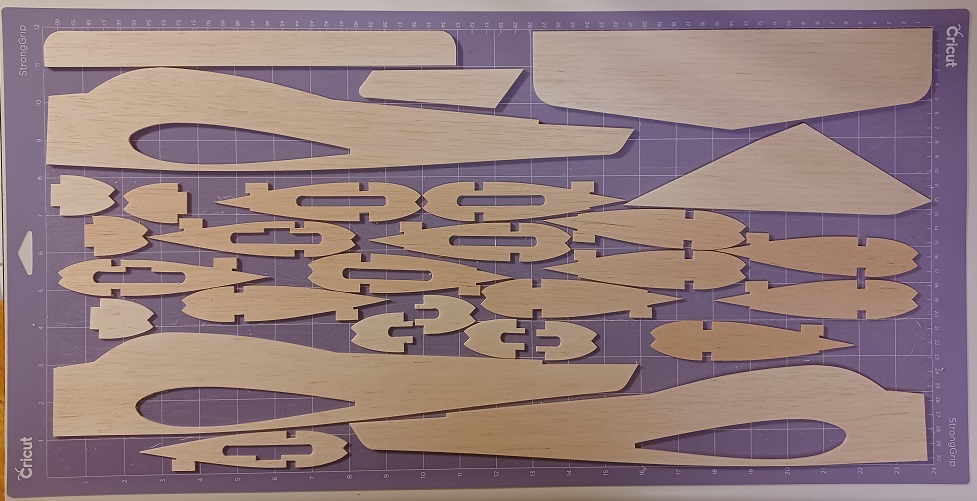 Okay, it doesn’t look so impressive now, but you’ll see.  I’ll build this in parallel with the Skyray 110.

Holy Molly Mark, what a Fibber.

Looks very nice!
Following with interest. I have lost the last i.c flying site near to me and so Electric is currently the only way to go and so I am very interested to see how this works out.