I used to never pay attention to the finer details of Cox engines back when they were a common thing…. But lately it has been interesting to catch up on their history and help me to learn what is in my small collection…. Before the step wall cylinders there were what is commonly referred to as thin wall cylinders….I own a few of these but there are slight differences as shown in the photo below…Measurements were taken ninety deg from the exhaust ports…..I know Cox started beefing them up when they found out some were getting bent from crashes….The PeeWee on the left was in that club…The change on the .020’s and .049’s is about the same … 4-6 %

Just a curious observation on my part…. Does anyone know when this first change took place or other info? 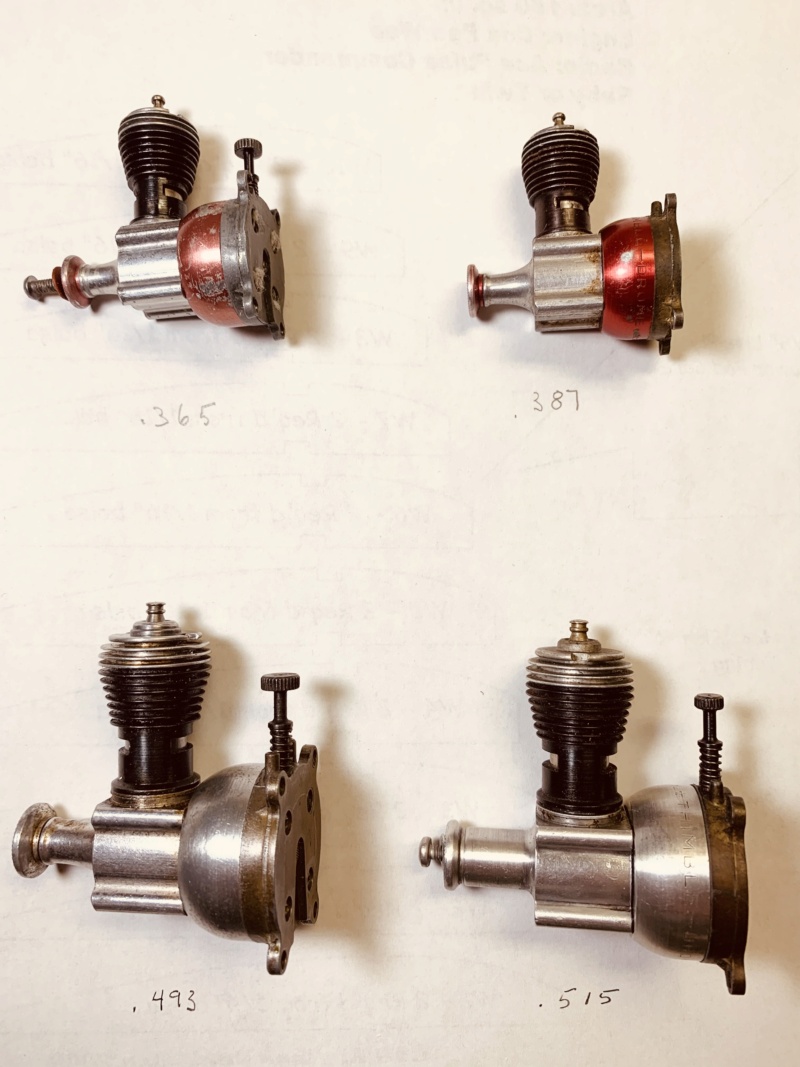 If you mean the position of exhaust ports relative to the crankshaft axis being parallel, I also noted this with some old stock engines, but I believe, that - unless it was just incidental - when COX may have realized this only had a limited impact on engine performance, they may have abandoned the effort to set this position. Making the cylinder and crankcase  threads for such setting, or only hand selection of cylinders and crankcases to set the ports looking parallel with the shaft must have been extra cost of production, that COX was seen to gradually give up on various features of the engines.

For instance, my thin wall cylinders are all tapered bore no matter if on TeeDee-s or not, and this contributes to sustained  compression and thereby to the longer life expectancy of the engine. The stepped wall cylinders are tapered only on the TeeDee-s. Later thick wall cylinders are not tapered even on TeeDees either, at least in the NIB engines I have. Finally only the Killer Bees and maybe Venoms came with tapered bore, a feature that, despite its benefit on engine longevity, was considered a cost item to be dropped.

Out of curiosity I got out the ruler. Most of my thin walls are .4935" single port. I found one that is marked #1 dual port that is .5120.
It would make sense to grow the dual port cause not much metal there to keep from bending. If you look closely you can see the difference at the base and in the exhaust cutouts. An old TD I have is also .5120 with dual ports and two boost flutes per side. 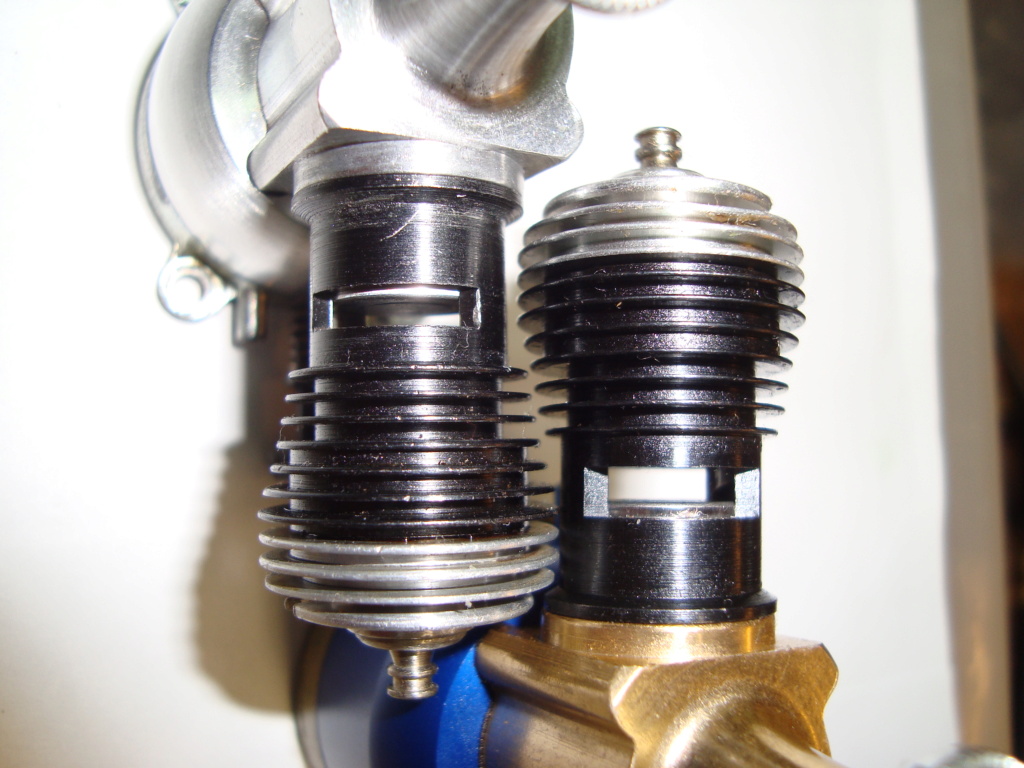 Thanks for the info, Interesting… I was focusing on the different diameters of thin wall cylinders, but their other differences are interesting as well, for example on the two .049’s……The “thinner” cylinder has the exhaust ports in line with the crank and has tapered bore as was mentioned…. It has SPI but barely perceptible…. Single bypass… No # …The piston does not have copper plate…

The “thicker” one does not have tapered bore (or not as pronounced) and SPI is more, about .010…Exhaust ports not lined up with crank…Single bypass… # 2….Copper plated piston crown…

The PeeWees are close to the same except as above but I did not take the “thicker” one apart to check taper…. I know the thinner one does have…. 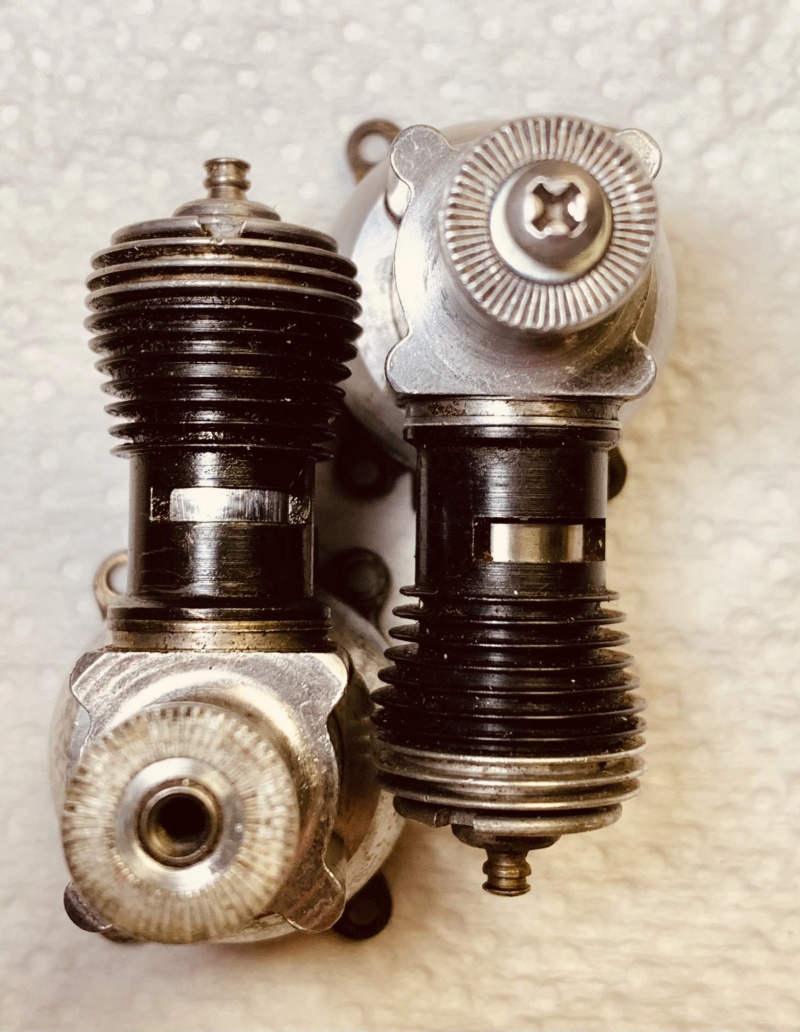 There are also changes in the width across the flats of the exhaust ports.

SPI probably couldn't be controlled tightly. SPI is the result of a stackup of tolerances between several components.

The Cox Model Engine Handbook is a great resource for information. https://www.modelenginecollecting.com/Cox%20Web%20Material/Cox-Book.html

Thank you for the link!