What I did today

What I did today

What I did today (watch in full screen):


I'd wanted to get into High Power Rocketry since I was a kid, but it was just never the "time".  Well, now that I have a little more time to do the things I've always wanted to, I joined the local Rocketry club and built a model rocket to do my Level 1 HPR cert.  Since building the rocket, I had to wait three months, as the previous two scheduled launches got washed out by the weather.  Today, the weather was marginal, but I managed to get my rocket launched between the rains and the heavy winds.

I chose a model called a Minnie-Magg from LOC Precision.  A fun build.  Not too challenging.  I had to build it in the apartment we've been renting while waiting for our house to be built, so I didn't have my normal modelling bench to work on.  I painted it red and green, and named it The Possum Rocket.  No one at the field got the reference. 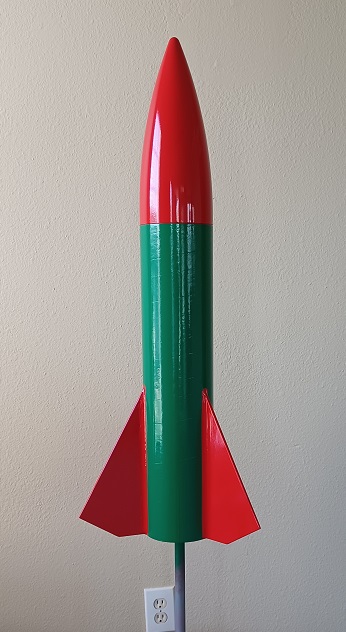 Since I wanted to do everything I could to try and ensure a successful flight, I picked a rocket motor that wouldn't take it too high so that it wouldn't fly off in high winds, or get caught in the trees around the flying field.  Most guys seemed to be going for around the 2,000 foot level for their cert flights, but I picked a motor that should get me to around 1K of altitude.  Apparently, I picked just the right motor.  Per the altimeter I put in it, the rocket's actual apogee was 1,132 feet.  Luckily, I launched in a relatively calm moment and the rocket only landed about 20-25 yards from the launch rail!  On a launch a little previous to mine, the guy was shooting for about 3,000 feet, and his rocket drifter off about a half mile away on the wind and he had the long walk to recover it.  Granted, his rocket was lighter, but I still lucked out with the wind.

So, now I am L1 HPR certified!  Now to build a rocket for my L2 cert so I can fly it at the High Frontier launch weekend in late September.  I have a few ideas....

I did model rockets as a hobby during my junior and senior high school years back in the early 1970's.

My favorite was Estes Gyroc. It had wings similar to a canard but without the nose stabilizer. Near or after apogee, the ejection charge would kick the spent engine casing out, which would deploy the wing flaps in opposite direction, causing it to helicopter recover like a maple leaf. I finished mine in Pactra Stinson Green with a bright orange stripe barber pole style down the fuselage, which would twirl when it was on its way to earth. The "rudders" that held the flaps at the proper angle when deployed I also painted orange. 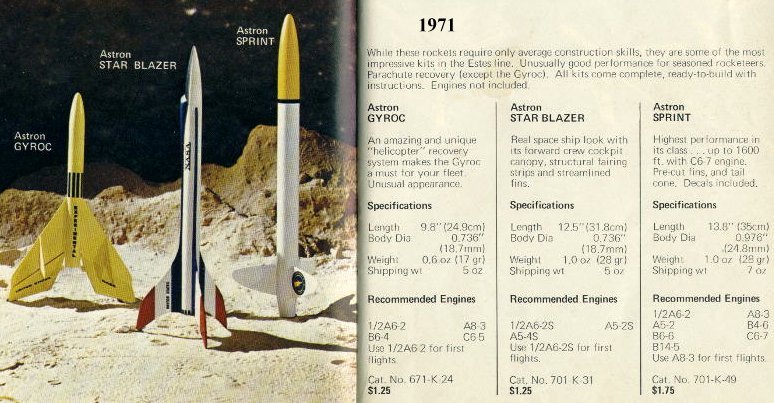 Had many successful flights with 1/2A to B sized single stage engines.

Then one day, I put a C-6-7 engine in it. It could not stand the tremendous strain of takeoff, stripping one of the wing panels and the other wing flap off.

It returned by tumble recovery, burying itself in the freshly watered athletic school lawn a couple inches and badly denting the rocket body tube. Thus ended my Gyroc.

I think nowadays, they would not allow a model to release a hard to find engine casing, which could perceive to cause a brush fire.

Cool! I must admit I didn’t ”get it” before you mentioned ”reference” 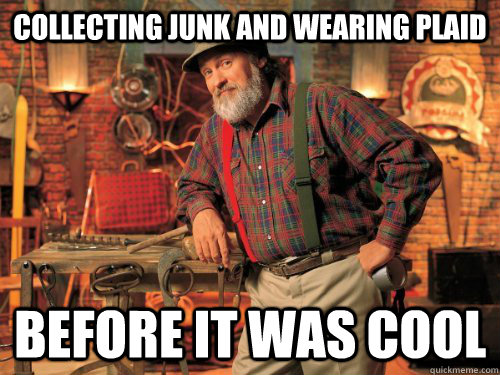 Maybe a decorative stripe made of duct tape might help

KariFS wrote:Cool! I must admit I didn’t ”get it” before you mentioned ”reference”

Maybe a decorative stripe made of duct tape might help

They'd probably still not get it. Red and Green was before McGuiver.

Congrats Mark! Nice flight. I too had cut my teeth on rockets when I was younger. I actually still have mine here in a box. I had planned on trying it all over again one day. But just simple Estes rockets. Somewhere I think I still have an Eggspress and a Mean Machine both still unfinished. If still around, they are in my parents basement. Now I want to find them one day after mentioning them. I also still have my Alpha, which was my first and came with the starter kit.

On a side note. I had actually met Red Green a couple of times here. Was always funny, and a friendly gentleman. I may even have my signed duct tape here somewhere too, as that is what he was signing for autographs.....

Congrads on the new hobby , good flight too , looks like you hit it right with the lesser height flight / wind