Woody on June 16, 2022 wrote:I have revamped the tank to make it uniflow and the engine ran much better only..... It cannot stay at full scream unless I continually ritchen the needle valve. I went for another fly today and got the engine running nice but a little bit rich hoping it would lean out with air flow in flight. It was a struggle and she reluctantly climbed and sputtered.

Understand. I tried to make my 3 oz. Hayes R/C clunk tank into a Uniflow on my 42" Ringmaster with Testor's McCoy .35 Red Head, but never could get it to work right. Finally just went with standard flow venturi suction with normal venting, (have no muffler so no muffler pressure), flew fine to the end. There's some tricks and trades about Uniflow that I still have to learn, but what the hay, without it flew fine all the way to the end. If it works, don't fix it and thus live fine with it.

My R/C's, use same normal setup, muffler pressure too if available. I tweak the carb a touch rich, so it would lean out to full power in flight.

Woody wrote:Thanks for the thumbs up. It takes all kinds to make a world in modelling and flying and each to their own. If I had an excess of funds then I too would probs have a fleet of large jets and a 1/4 scale Tiger Moth. But I don't have them nor the space to store them so thats why I chose small models although I do have a few 2metre and 3 metre powered gliders.

Yes, understand exactly. When I was a young man, I showed up at a couple R/C clubs with my .049 powered half-A single and two channel aircraft, and got chased away. They were flying 4 channel .40 plus powered full house aircraft, and that was their club standard to even being considered a candidate for membership.

Thus, when it was still permitted prior to the woke-ism that entered our government services at parks over the past 20 years that ban model aircraft flying, I'd fly at military bases and national parks, some municipally owned model plane parks. I'd fly until the batteries ran dead or out of fuel. An exception was the R/C club in North Little Rock, Arkansas. They flew on a wide open field, a fuel storage easement area west of Little Rock off I-40. They were the friendliest bunch around back in 1978 and 1983.

Woody wrote:It gets to be fun when we can still build and fly our old timer style models and is a reminder that we ( the old school) are still here. I like to promote building yer own not to be elitist but to keep up the demand for balsa, coverings etc etc so that we can all be supplied with what we need.

Agree wholeheartedly. I seriously doubt any of us are truly "elitists", we all have different likes for aircraft, and thus as such have much to share to the enjoyment of others here.

Woody wrote:What the big boys do with their pattern ships I could never do but it is great fun to sit down and watch them throw these things about the sky with manouevres undreamed of.

I feel the same way. I appreciate what they can do. I just don't feel a need to compete with them, to have fun.

Woody wrote:I am building a Bugaboo at the moment and it will be powered by a 1cc ED Bee ( 1951) Diesel. It is pleasantly ugly and so vintage looking. Wait till they see that! No glow plug, clip or battery. Can of diesel in the pocket, rag and radio. Thats it. That will surely get a " What the Heck!!!!" 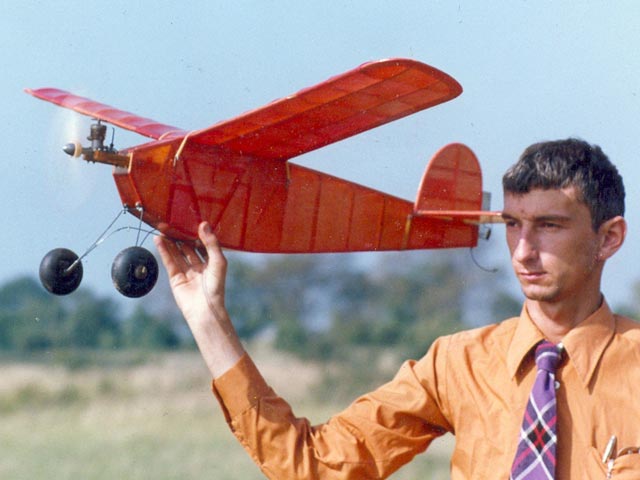 Yep... Thats the one.
I have modified the fuse shape a little so that the nose is more rounded and the top fuse stringer curved down to make it even prettier or uglier.
The viewers choice of course.
I have also altered the position of the wings spars to add a top spar about 40mm from LE so as to prevent covering sag.
So pleased that the ED Bee fitted exactly on the bearers.
I am lucky to have an luthiers bending iron to bend the fuse longerons to extremes ( almost breaking point).
Woody.