Log in
Search
Latest topics
» The Nemesis
by HalfaDave Today at 3:13 am

I went out to the field today to try 3 planes. I recently rebuilt my K&B .61 on my giant Ringmaster and it needed some air time. I get to the field, I give it another break in run on the ground and figured all was good. I asked my son to go grab the handle and lines and he says, "Where is it"? That's when I discovered after a hour drive that I forgot my box with all the lines, handles and other needed items. OKKKKK!!!!!!! So, I had these Fox's with me and I thought let's give them all a go. I had a lot of fun running them. Until some of our other members showed, it gave me something to do to buy some time. 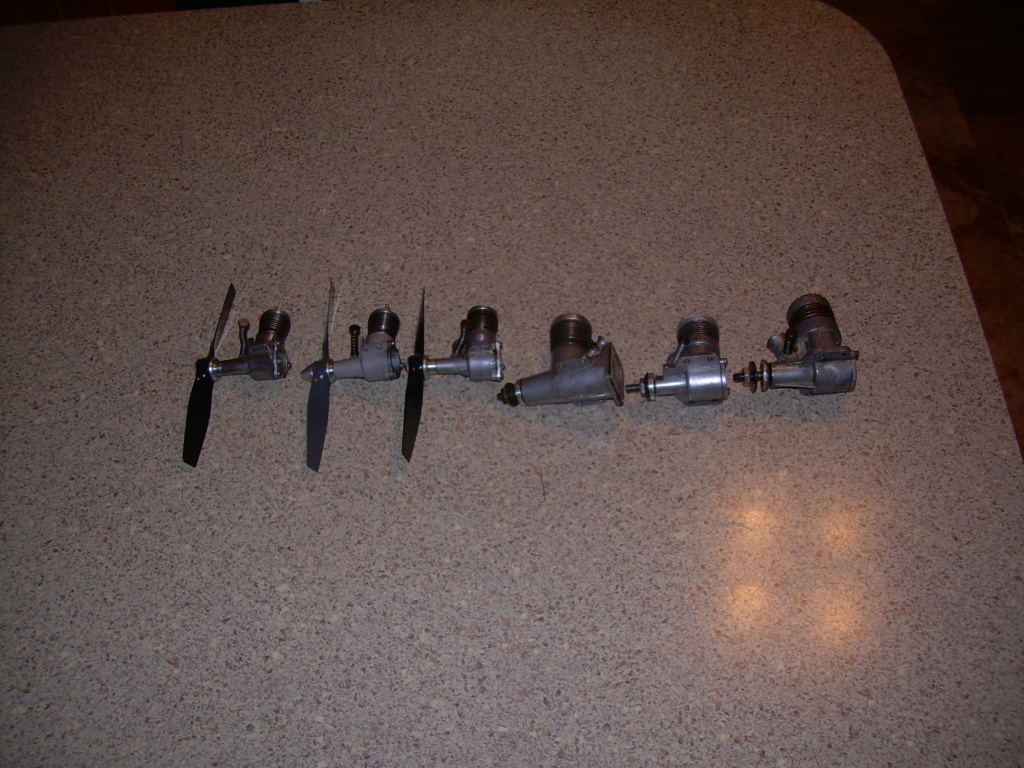 Ken, particularly noteworthy to me that is, is the middle one, the infamous Fox .09 Rocket, counterpart to the later 1963 A.C. Gilbert .11 Thunderhead. Both are claimed to be easy starting but very mild ".09's".

I found it interesting that the Fox back end could also serve as a small fuel tank. 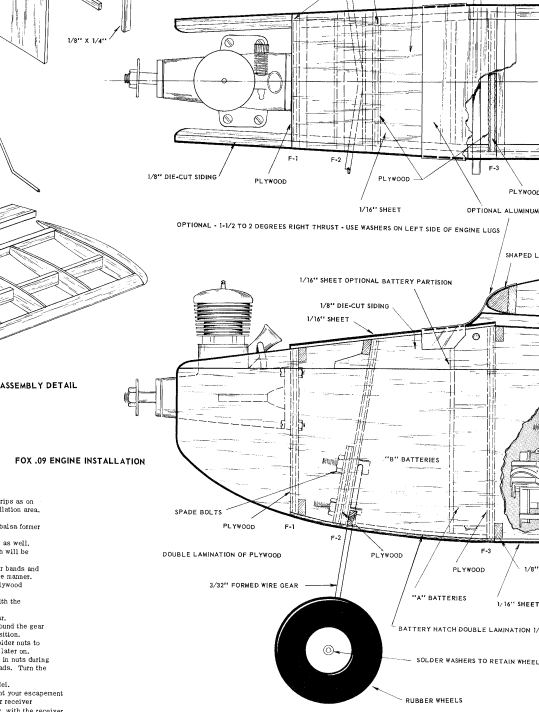 For the reason of the narrow cheek cowl, didn't have enough room for the Gilbert with standard RC mount, so a Medallion .09 R/C will do duty.

The .09 tends to like 6" props vs 7". I ran it on both a 7x4 and a 6x4. It starts quite easy, usually backwards and all of a sudden kicks and runs forward. It likes to be wet like most Fox's when starting which is more than likely the reason it backfires initially. Many times I see the Fox .09, someone has hacked the tank back off with a hacksaw. It makes me cringe. Not only is it irreversible, they usually do it where it looks like it was chewed off. I just so happen to have for some reason a fair amount of parts for these. I have a Sterling Triplane I built that currently has a Babe Bee on it. It really needs this .09 to balance and I might just give it a go.
The .10 though is most impressive as it runs extremely well and it would probably surprise most whom are unaware. The .09 is moderately quiet but the .10 has a bit of a note, I believe the Gilbert stacks would fit and I would like to come across some.

A K&B .61 on a Giant Ringmaster........I would need to be anchored to the ground.  I can't imagine the pull that would have.  Sorry you forgot your flight box, I would have liked to have read a report about that.

The Gilbert 7 I ran last week at first started backwards.  Nice starting/running little engine.  I read about Fox engines and always think about GWillie. Gilbert stacks are easy to come by, you just have to buy a whole lot of stuff with them to get the stacks.

The two Gilbert .11's I have came with stacks, one from Tower Hobbies in the early 2000's, with two right hand stacks. 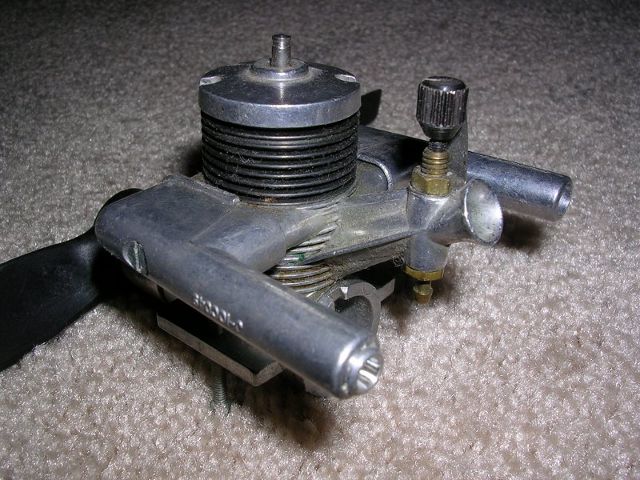 However, since the one seller who was for a long time selling them on E-Bay (sorry, short on names this morning)

, no longer has them, the current prices for a full engine are about double what he charged for new.

Yes, the smaller or less pitched props it is happy with shows it is "miserly" on power.

Gearing the article toward American users, he tested it with 20% nitro fuel, which was more common and cheaper in US, obtaining 0.111 BHP at 14,000 RPM. Basically I believe this puts it most likely in Medallion .049 range.

The HP curve topping at 0.084 BHP at 14,000 RPM appears to be generated using FAI (no nitro) fuel, which I gather was preferred, since nitro fuel was considerably more expensive in UK and the magazine's distributorship in other commonwealth and European locations. This is in the Cox .049 Black Widow range.

Jan. 1961 Aeromodeller wrote:Summarising, a very clever design and a nicely made engine which, for its price, must be something quite exceptional in value in the States. We endorse its easy starting and good running characteristics, but it is rather a "lot of engine" for the power it provides.

(In other words, for the same amount of money, you can get another engine in UK with more power.)

However, I have learned or gathered, and as you @Ken Cook allude to with your Fokker Triplane that still, and @Kim and Bob @rsv1cox have demonstrated, a powerplant properly matched to an airframe will satisfactorily perform, which is all that really matters.

I believe I have a Pet .09. It feels clapped out but I think the base gasket it shot. It uses a very thin and oddly shaped gasket under the cylinder. I actually found a new one which was all folded up but trying to use it after all these years proved no good.

Ken, yes, similarly, I understand clapped out. I have a few engines so worn they fit that category. Amazingly, I bench ran an auction buy Enya .15-III TV with very low compression. However, once started, it amazingly fired up and ran strong as though had compression (but this was on 25% oil content fuel).

4 years ago I acquired an OS Pet .099-III C/L version, with cylinder sleeve instead of steel finned cylinder. I won the auction for an earlier R/C steel fin, but by accident, the seller shipped the wrong one.

We discussed how to resolve. I found out that it was being sold by a widow, who was selling her late husband's engines and gear. Under a reduced income, she was trying to make ends meet, she was truly sorry about the mix up. The other buyer was willing to retain the other, and as such, felt it would be a travesty to demand much, and so accepted the later one, which in a way was a blessing. (4 years ago, engine prices weren't as crazy as they are now.)

With clean-up, it looks brand new, a low time engine, with decent like new compression and its power output is equal to the OS Max .10 of same vintage. I mounted an NOS muffler on it, which is the same set up as Peter Chinn did in his April 1972 Aeromodeller engine test, output .15 BHP at 15,000 RPM muffled on 15% nitro fuel. 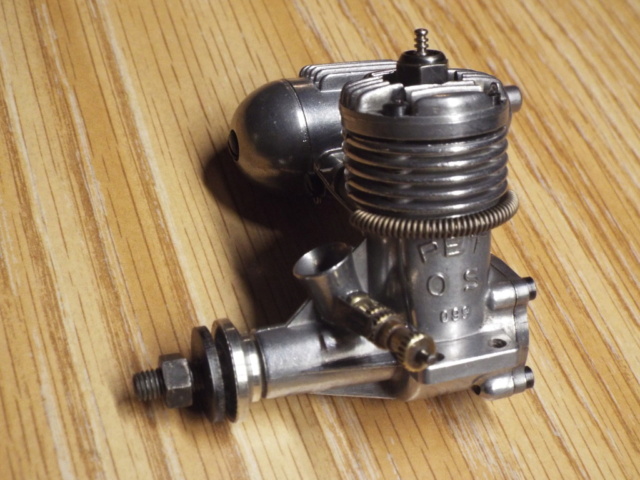