» Murphy Laws of Modelers
by GallopingGhostler Today at 5:33 am

» Who invented the throttle ring?
by GallopingGhostler Today at 3:46 am

» Decals for Models
by latole Yesterday at 10:35 pm

» music vids.. some of your favorites
by rsv1cox Yesterday at 10:26 pm

Am looking at a ebay listing of the cox td3 and wondered how well it flies.

The reason i am asking is that it appears to be "relative" possible to reproduce it with a vacuum forming machine.
.
If there is already a cad drawing of the model then a desktop cnc mil should be able to cut a mold out a piece of wood.
Then install the belcrank / firewall (?) and glue the 2 halfs. Tail could be 3d printed or made from wood.

They are COOL looking. This same model was my very first Flying model, Christmas. My parents read the instructions and would't let me fly it until spring. I had to practice turning in circles so I wouldn't get dizzy. That was in the instructions. OK! Springtime, Easter Sunday at the Uncles and Aunts house with a houseful of cousins. My mom's brother  was the family aircraft guru. He'd built a plane the flew up, up and away. Of course I was to young to start that dangerous gas engine, so my Dad and Uncle spent a long time each trying to start the poor thing. FINALLY it sputtered to life, no warmup, NV set to a mild screem, it was released. My Dad at the controls, the most perfect figure 9 I ever saw, actually the first figure 9 I ever saw. The first and last flight all at the same time!! Looked a lot like this one on Ebay. 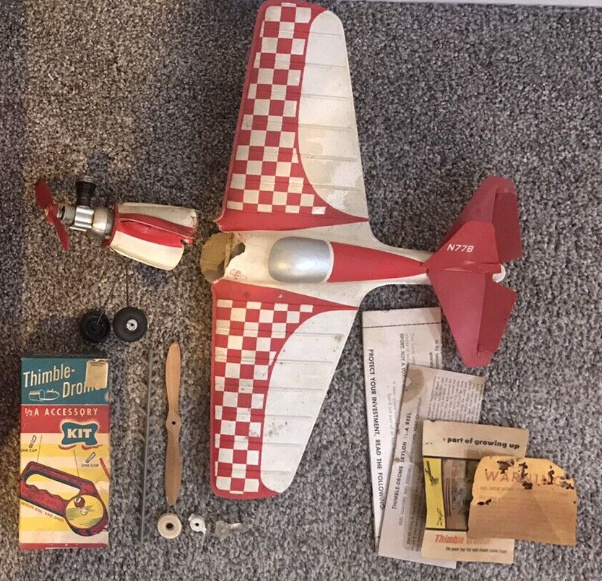 I'd dare to say if they were good flyers there would be a lot more of them available. Being made of thin light weight molded plastic that broke easily didn't lend itself to a long life. I would like to think  that a balsa replica would look as good as the original, and as they say "Balsa flys Better"

I would submit that they flew very well.  A local club member has one new in the box, and he let me touch it.  Oooohhhhh!

Yes, they were made of thin plastic.  Yes they were very light.  Yes they had a relatively short elevator coupling.  But they have a nice, big, symmetrical wing.  They were built to fly, not crash.  Not teach a novice how to fly.  Go back and look at the advertising for them (Exceptionally light weight for its area and power ... flies like a dream ... stunts like a veteran).  They were promoted for stunt flying.  They were meant to fly without being abused.  And I'd say that at the hands of someone past the beginner stage, they must have been a revelation!

I keep thinking I'm going to go over to the club member's house with calipers and a ruler and measure it out for a replica.  In fact, next time he asks me to come over to fix something for him on one of his 1/2A engines (the only engines he's really familiar with are Cubs and Atwoods), I'm gonna do just that.  The thing that's always made me put it off was having to carve out a hollow block fuselage and replicate the paint scheme.  Not that hard to do, just not what I feel like playing with right now.  Kinda the same reason I'm holding off on a Spook replica.

As for why there aren't more available on the used market, it's been almost 70 years since the came out (1953-1958).  I dare say that no one thought to put some away for future collectors...

Marlesky's photo, top view of the TD-3 gives enough detail that one could clone the wings and elevator to scale. Now all that is needed is a good elevation of the fuselage and rudder.

some views from diferent angles 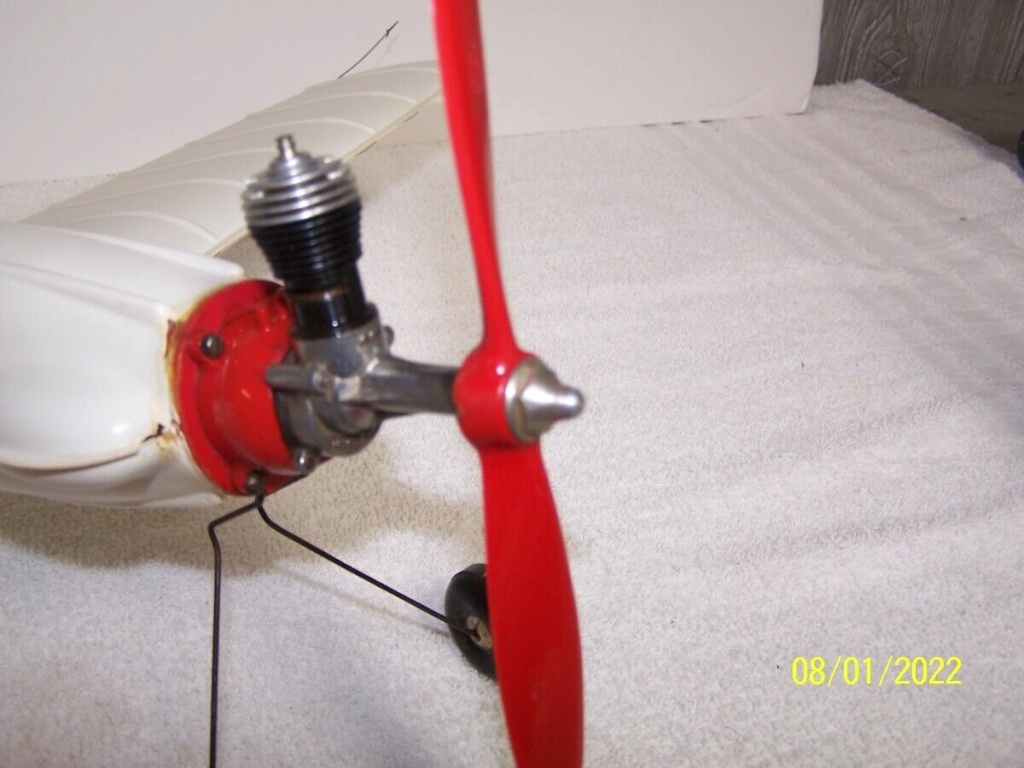 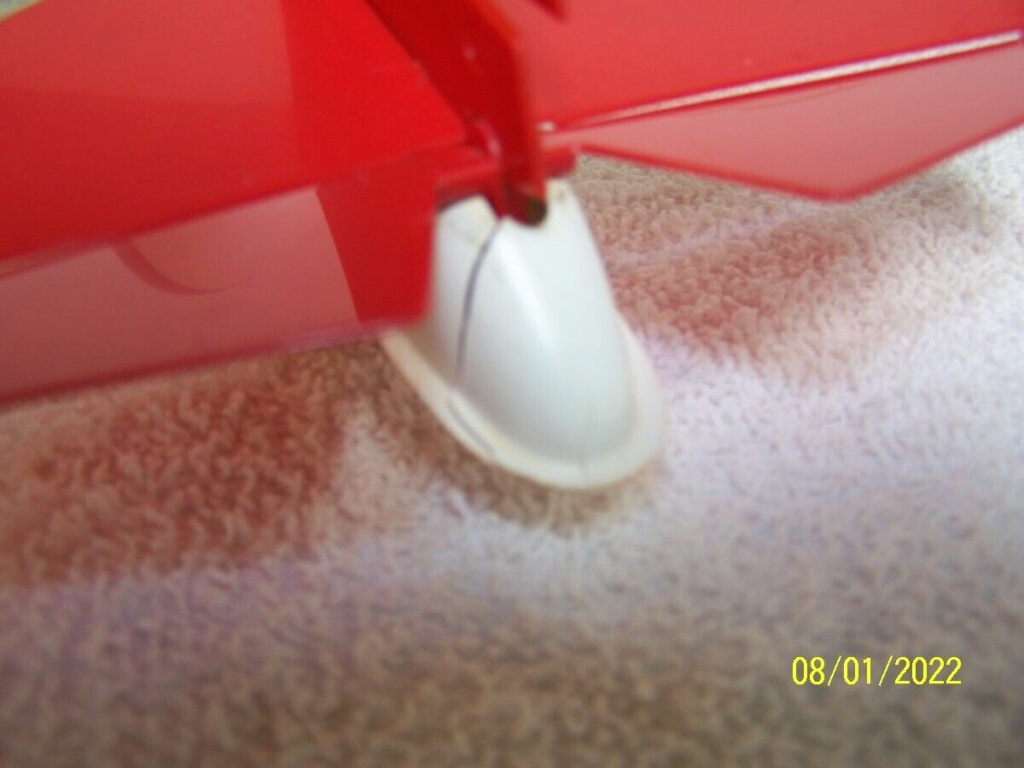 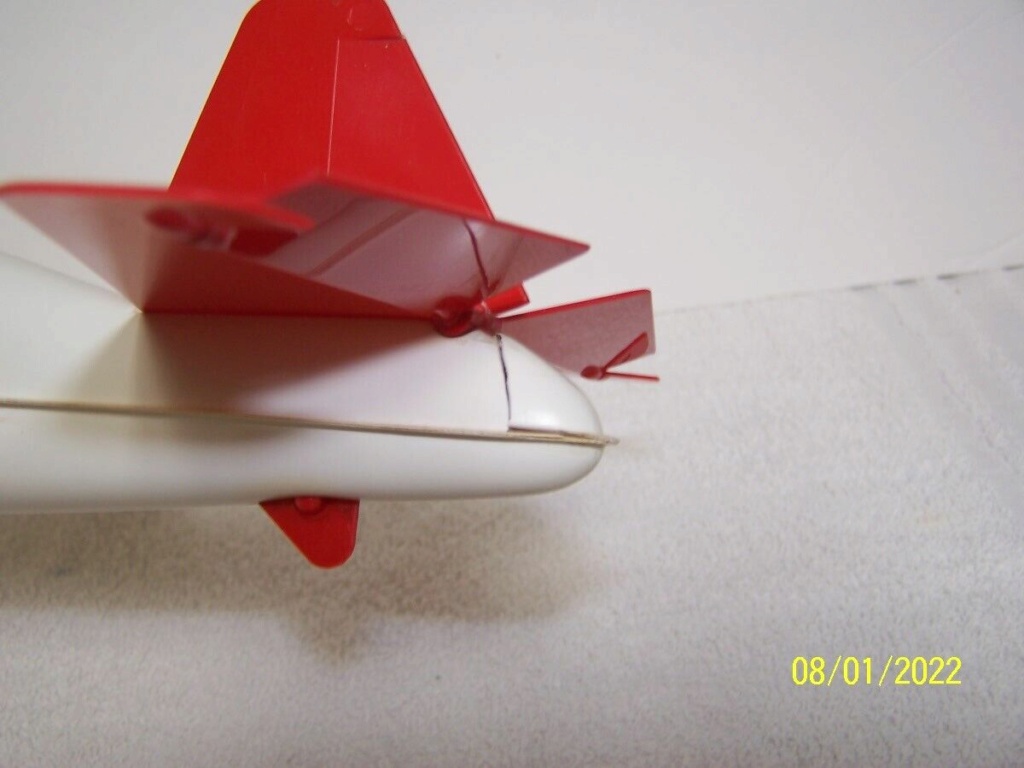 some views from diferent angles 2 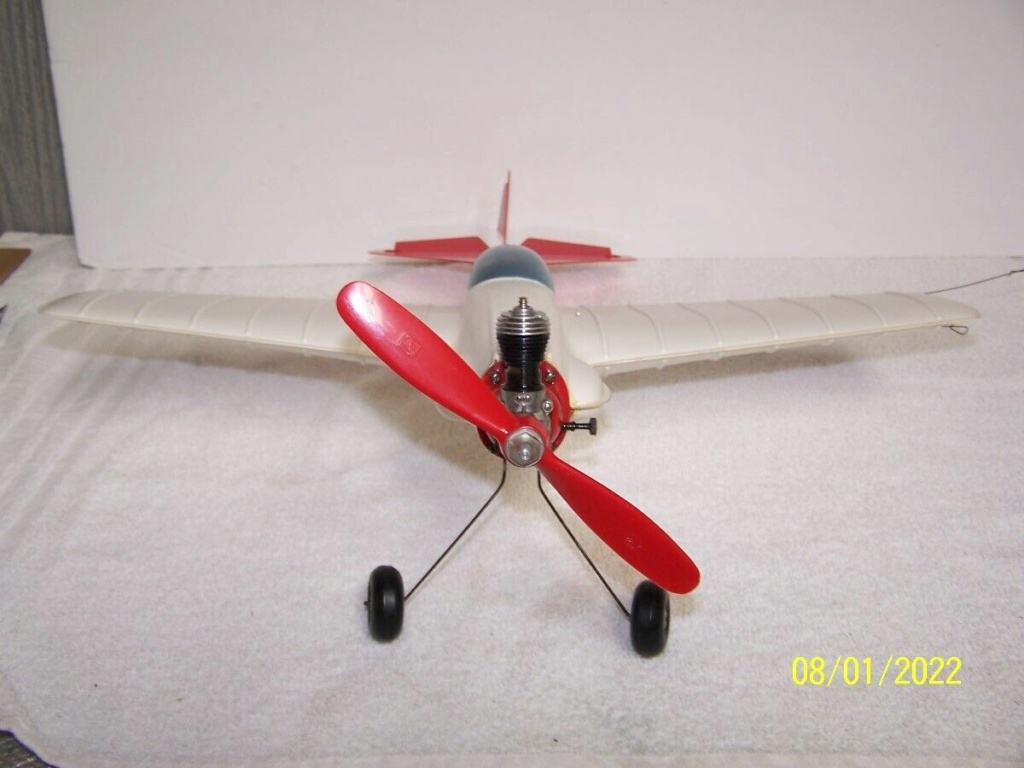 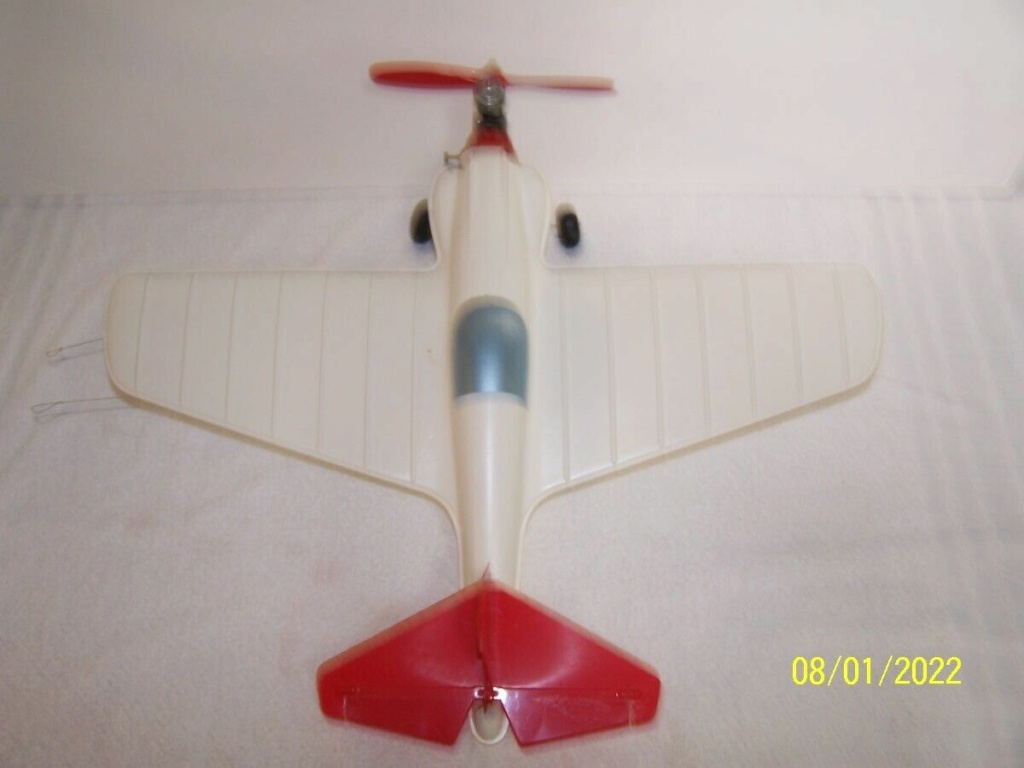 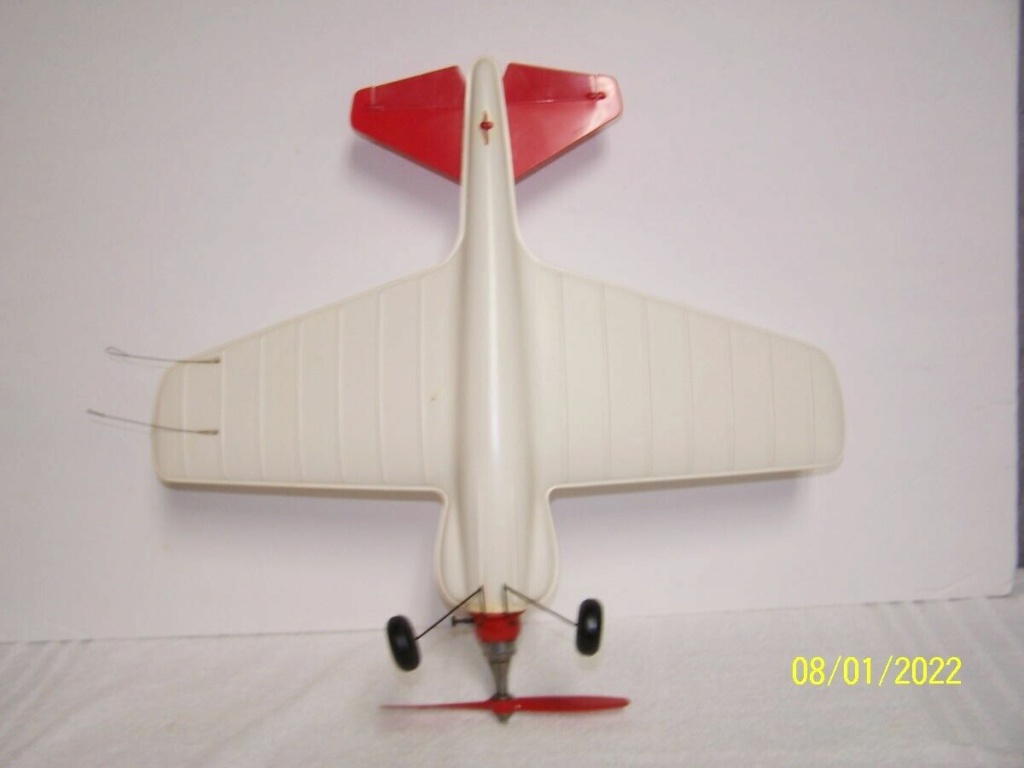 some views from diferent angles 3 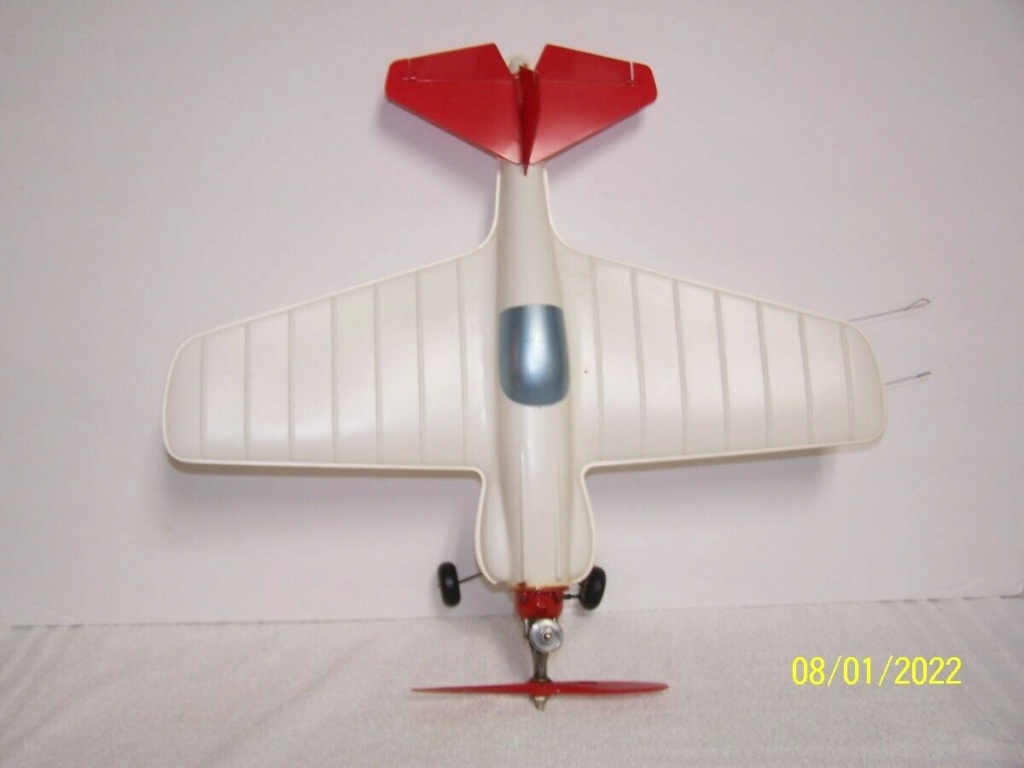 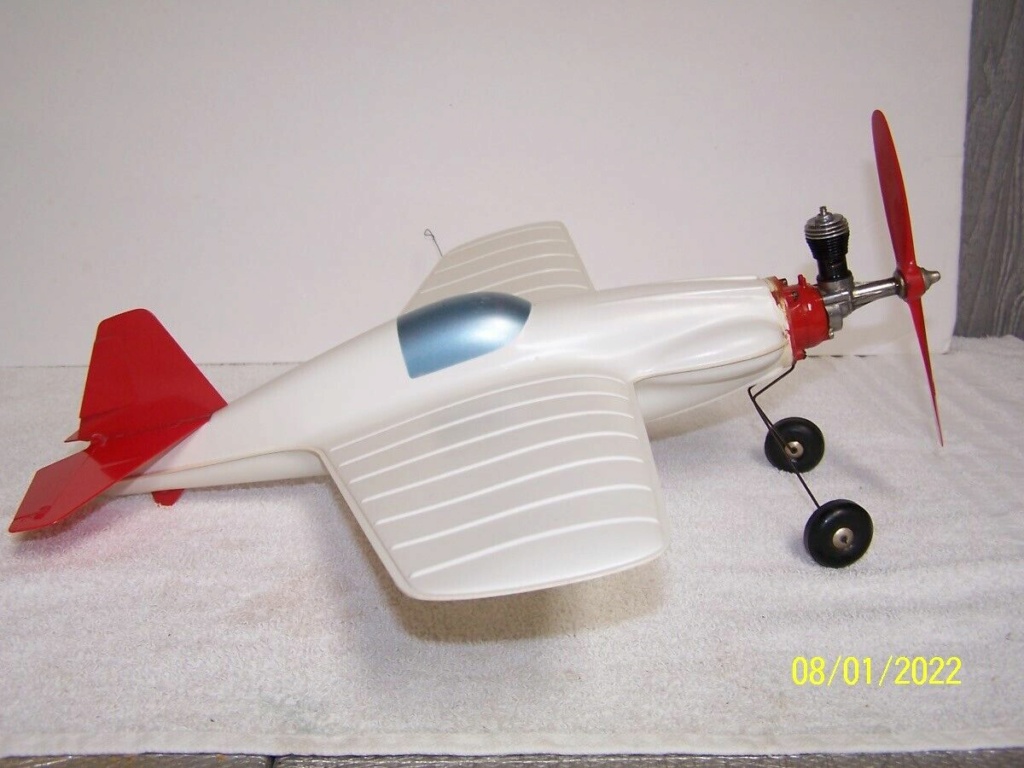 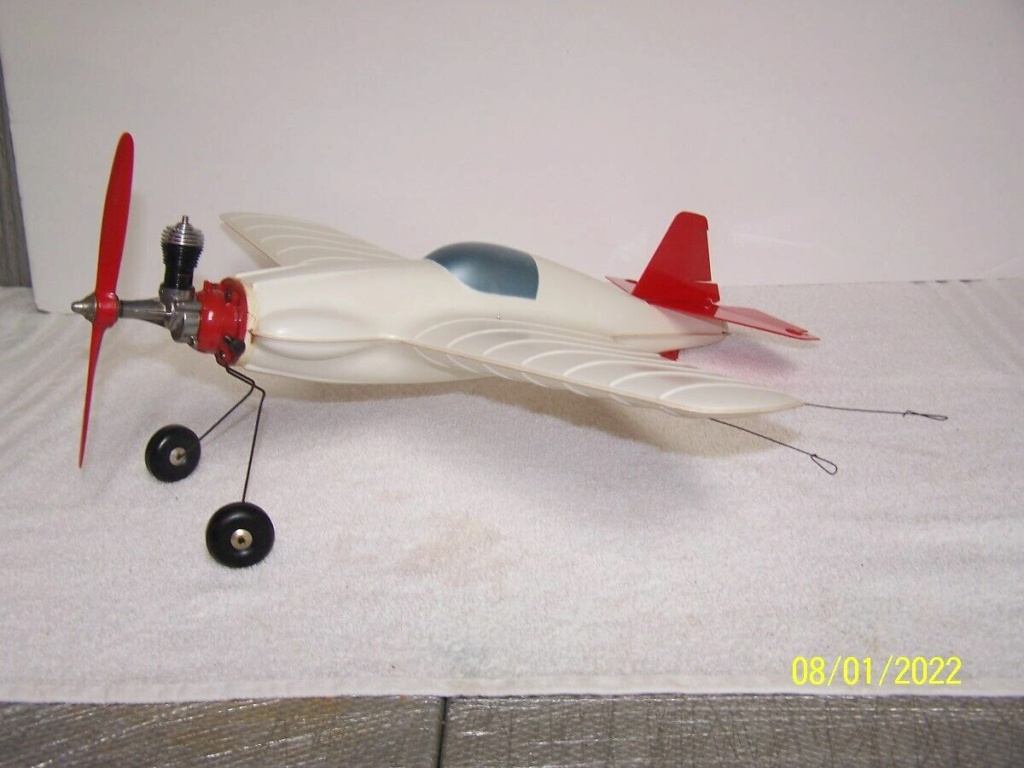 Anyone here who enjoys cad design?

If this model can be enterd into a cad design then modern technology makes it possible to reproduce it with hobby level tools.
Cutting a wooden (?) mold for vacuum forming would make it possible to make a small series of shells.

Another use of the cad file would be to create (3d print for example) a negative mold and make the shells from epoxy glassfibre for a much stronger model.

That is interesting and like you say with the techno, we have now alot can bee done , Is that yours cmulder ? Are the checkers decals i see there not on this one as the others i have seen .

Yes, Those are pretty little airplanes… Here’s a good side and top view to add to George’s list….I think it may be a “someday “ project for me too… 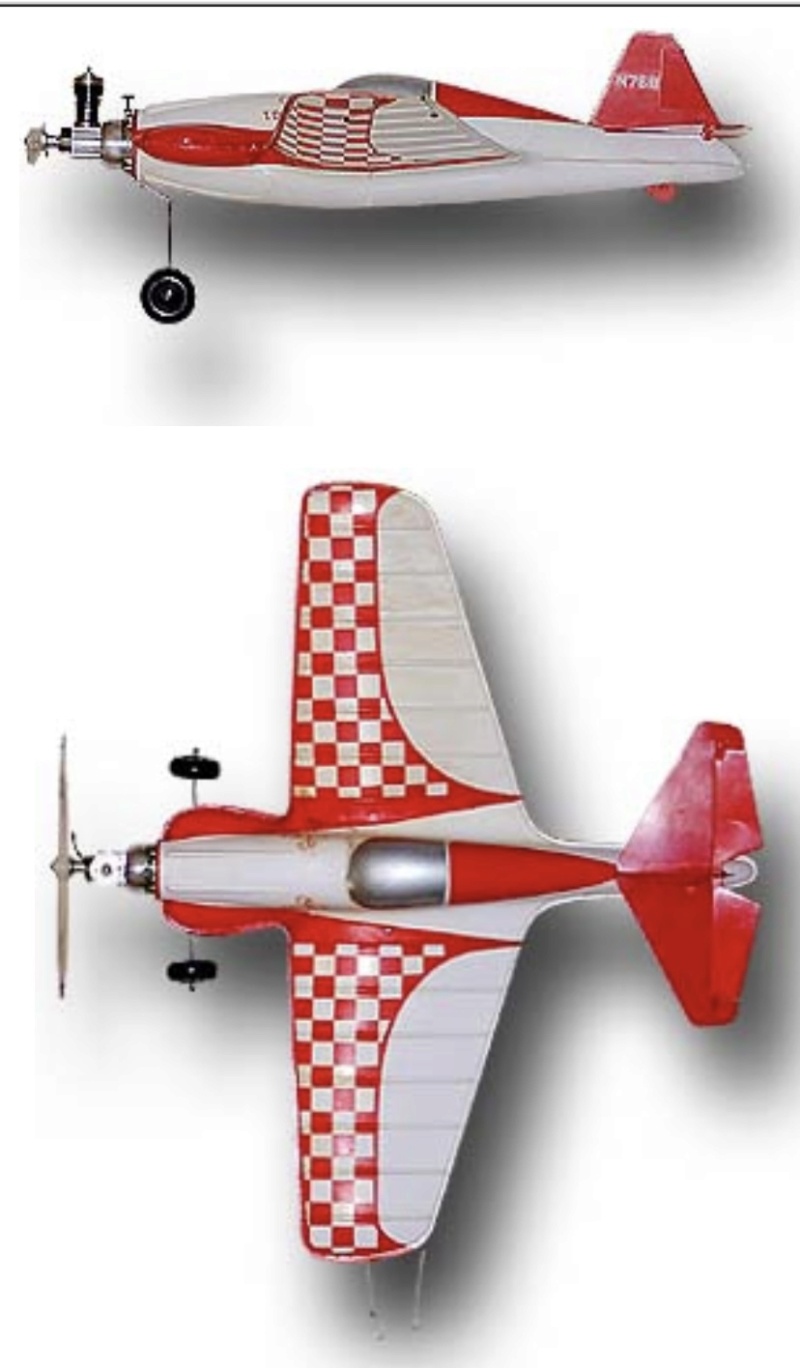 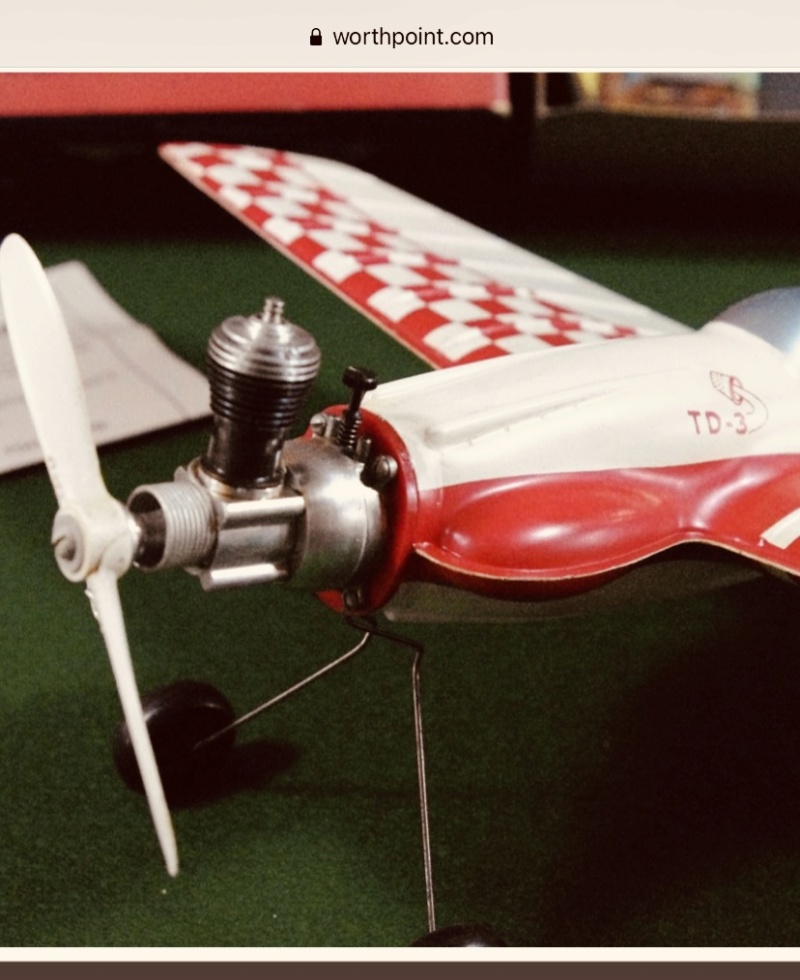 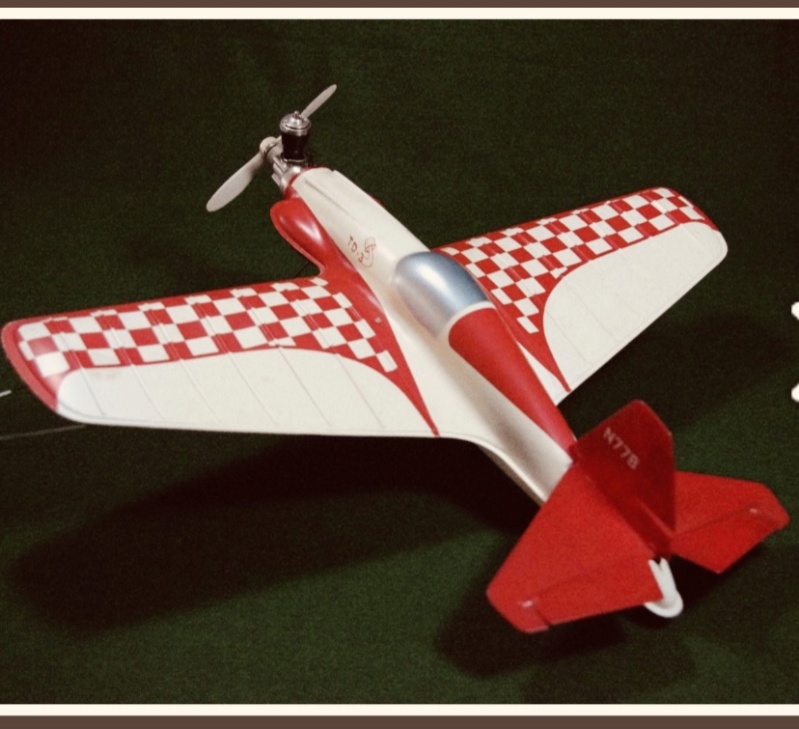 The pictures are from a ebay listing.
If one of the people here have one then there another way to get the 3d cad model of it.
There is software that can make a 3d model based on a collection of pictures.
The result will not (yet?) be perfect but for a relative simple shape like his model's body its likely already "good enoug" and can be "cleaned up" with other design software.

That other design software is called a "brain and a mind".

praktische and talent are also needed ...

That other design software is called a "brain and a mind".

Sure a skilled craftsman can carve the mold out of a block of wood but not all have these skills or a workshop.
A digital file that can be shared would help manny to recreate this model.

Well there is a bunch of pictures right here and would bee surprised if no one on here has one, right off i can think of two people . Do you have the skills and or tools to do such a thing ?

When you do a search with the keywords "picture to 3d model" you get a list of online services that offer this function.
There are also programs that can run on your pc as long its fairly recent and "powerfull" like a gaming pc or  movie editing workstation.

In a ideal setup you have a photo camera in a fixed position  (modern smartphones for example work greath) , have the subject on a even color and background.  Then you take a picture, rotate the subject 5 degrees and take the next untill you have the full 360
If possibe if the same can be done with the subject vertical then you have even more information to work with.

Upload these pictures to the service of your choice and you get a 3d model file back in the shape of the subject.

Likely that model wil include the tail, engine and landing gear but they can removed with simple editing.

Then (in software) split the 3d model along the seam line to get the shape of the top and botom shells.
Depending on the avaiabele tools either use a small cnc mill and carve the molds out of wood, or if you only have acces to a 3d printer print the molds with a higher temprature resistant material like abs plastic .

Again depending on what is avaiable have a local service pull a copy from the mold or make your own vacuum forming machine using a kitchen oven to heat the sheet of plastic and a vacuum cleaner to pull the vacuum. Again much info online on how to,

Once you have one done you can run a small production line to make models for friends and for example organise a fun fly with them.

The picture to shape also works for other things like other cox models and there parts. In theory a 3d printer pt19 should already be possible.
This way we can enjoy flying replica's without fear of damage while keeping the originals looking good as display modlels.

When I posted the additional photos I thought George, Galloping Ghoster posted the initial set… Photos credit is cmulder… My apologies to both….

the pictrues are from a active ebay listing

If anyone really wants a original one then this is a chance.

When I mentioned about "rolling one's own", I was thinking more in the line of a Walt Musciano creation. It doesn't have to be an exact scale representation down to the last contour and plastic fusion segment, just a "10". Ten feet (3 meters) away and it looks like a TD-3.

But, seriously, each has their own standard, and for some of us, the simpler the better.

The photos all provided are more than sufficient to make a decent representation of the TD-3.