» In search for the COX engine with the longest runtime on its clock
by balogh Today at 9:27 am

Has anyone here had experience with the backplate throttle available thru COX International? 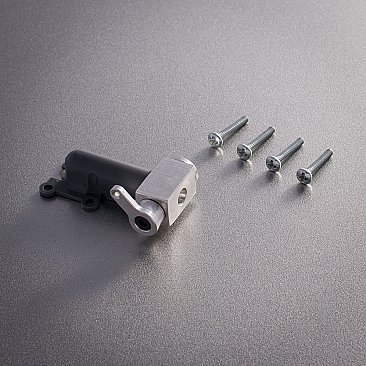 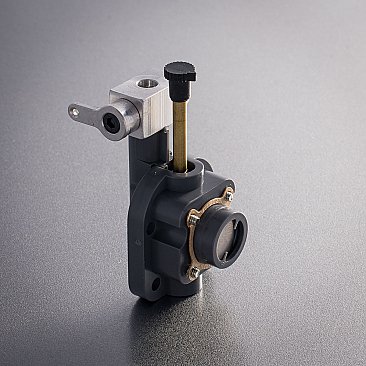 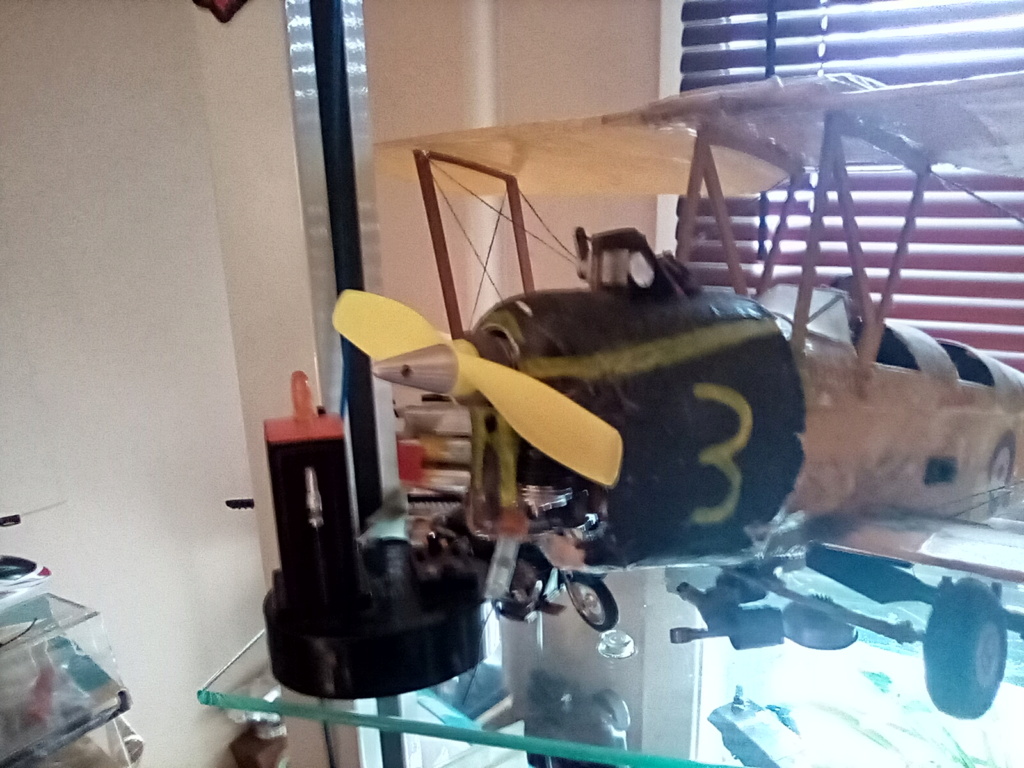 The engine must be equipped with a thrust washer Because when the engine is idling the crankshaft is like sucking into the crankcase And once the plane is in the air, the propeller may move every time the throttle is placed in the idle position. And because of the friction it is important to check for exesive play and lubricate the thrust washer before every flight An advantage is to be able to turn off the engine or to simulate engine cutouts also to cool and lubricate when idling i like the sistem its just Not that Good for peak power it has slow responce throttle

andrew wrote:Has anyone here had experience with the backplate throttle available thru COX International?

I've been flying one on Little Traveler for a bunch of years (it was added not long after its x-country flight in 2009.) and it works great.  I DO usually have to play with the mixture a bit, and there is a glowplug adapter/heat-range core that was recommended for good idle/top end, but I can't remember...maybe still on Bernie's site.

It can take a moment to "un-choke itself" from idle to full power, but generally works well, and will let Little Traveler make low/slow passes, and also taxi around, though the plane still prefers a hand launch to keep from chasing its tail. 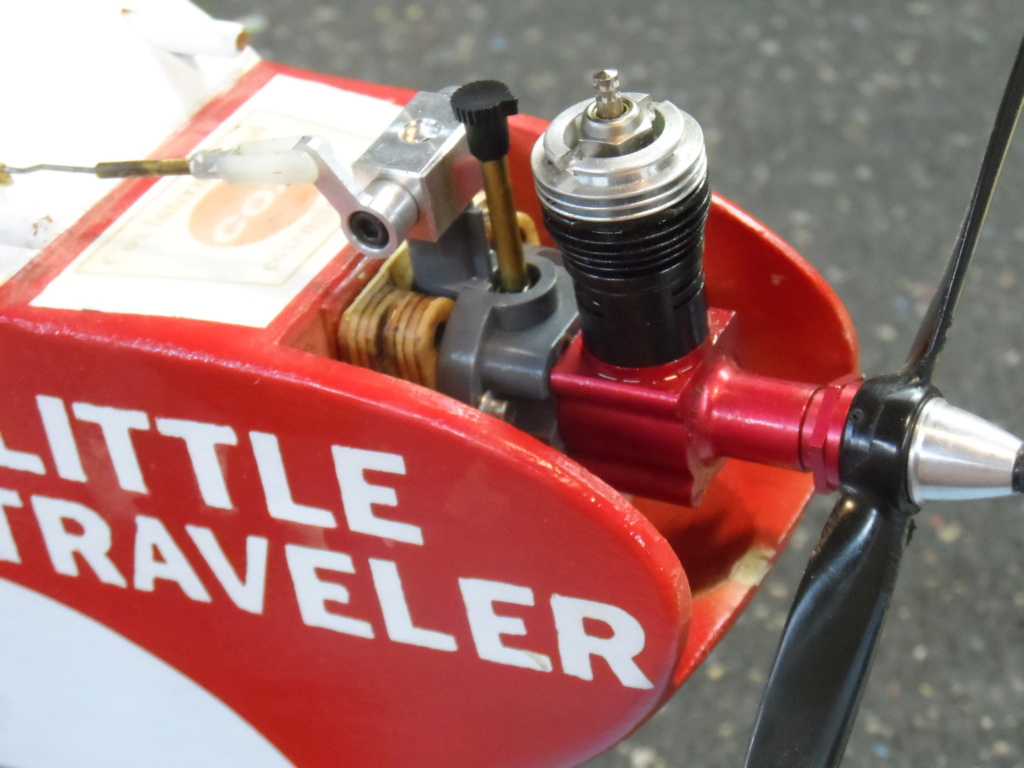 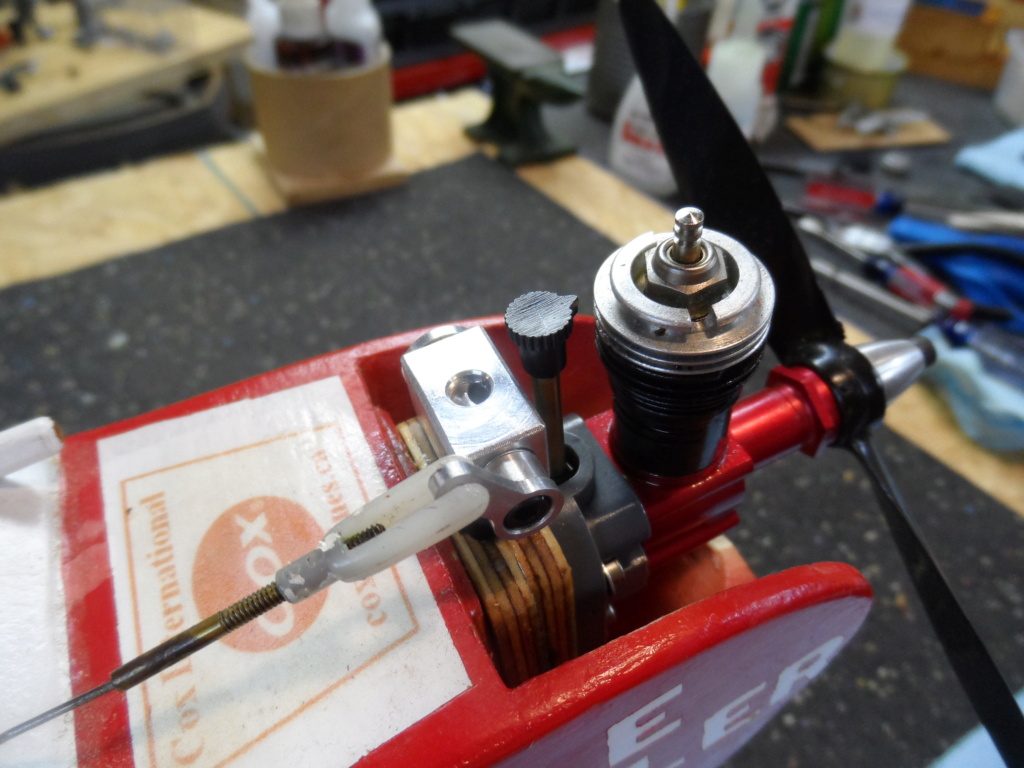 Since the exhaust restrictor was not linear, I found that half throttle was about 1/4 to 1/3rd open. I ran some calculations, found that I could use the Ace KRD quick blip sequential throttle servo to do a decent job of throttling the R/C Bee on my Minnie Mambo. The servo disk wheel moved normally high at 0 position, the half at 90 degrees, and idle at 180 degrees. I figured out the range of motion required for the R/C Bee, 0 was idle, 180 was 1/3 to 1/4 open for half, and 90 for full throttle. Had drilled a hole closer to the wheel center, so I could get the right travel, since the R/C Bee had less length of motion than a standard R/C motor.

It now worked in reverse, IDLE, then MEDIUM, then FULL throttle, but it worked. Had a total blast with it. The simplicity of single channel proportional rudder only with throttle control added a new dimension of fun for a calm afternoon of flying. I'd put in at least a dozen flights before calling it quits for the day.

I use the backplate throttles from Bernie on a number of RC Air Cars my lad and I drive, put streamers on and have combats.

They are from my experience for the application I have Excellent throttles!!!! I tried using OS G model RC carby throttles adapted to the backplate and the ones from Bernie are far superior! I also use the plug adapter Bernie sells with a glow plugs I purchased from him as I was buying stuff anyway. We drive and combat out cars in the suburbs with lots of houses around. We use concrete/bitumen tennis courts where several are joined together, or we use empty car parks. Because of the noise we use the Mufflers for the 049 that both Bernie and Matt sell, and I use them with the standard really small hole in them. You can hardly hear the engine running. Certainly no one could complain about the noise.! With the backplate throttle, plug adapter, muffler, and I mix my own fuel so I only put 10% Nitro in the fuel for these as Im not after high RPM. We get a really good steady 6,000 rpm which I have measured with "RPM Gauge". Not sure of the top revs as I didnt check, but I suspect its probably around 14,000. I find the throttle is very responsive going from the lowest rev setting to its max throttle setting and back down again. I have to admit, I was surprised by just how great all of the components work together to provide a really reliable, easy starting, and smooth throttling engine, which is basically a surestart. I have set the RC up to not close the throttle all the way and one of the buttons on my RC does cut it right off, that when when using it, I dont have problems with accidentally shutting the engine off, but have a button setup so as that I can if needed. Because our little cars are impacted by the gyroscopic effect of the engines/propeller we need to turn the car(s) differently or at different max speeds in different directions, and the wind effects them a lot, so we are using the throttle non stop. I was actually going to write a post exactly about this, as I was really surprised and impressed at how all the different parts worked so well!

I hadnt thought they really would, and most of the posts on the forum are about how to get MAX rpm, not lower RPM with good throttle control and very little noise!

Starting them requires different settings to the normal surestart without a muffler, throttle, glow adapter, and only 10% Nitro. I have found they need 5 1/2 turns on the needle/ choke them through several times, so as that they are almost flooded, and then with really good batteries they will start very easily. they then need the needle slowly wound back about 1 and 3/4 to 2 turns from the starting point and run great!. I have tried and tried other ways of starting them and other settings, and found this or me is extremely quick and reliable. If I use say 25% nitro the start only about 1/2 to 3/4 turns richer than normal. At the cost of Nitro and an application where Im not after super high revs, this combination works great. My Lad and I have actually only just walked back in from a session of Air Car Combat with them.

Pictures of one of the cars showing the engine, throttle, plug adapter and muffler below. 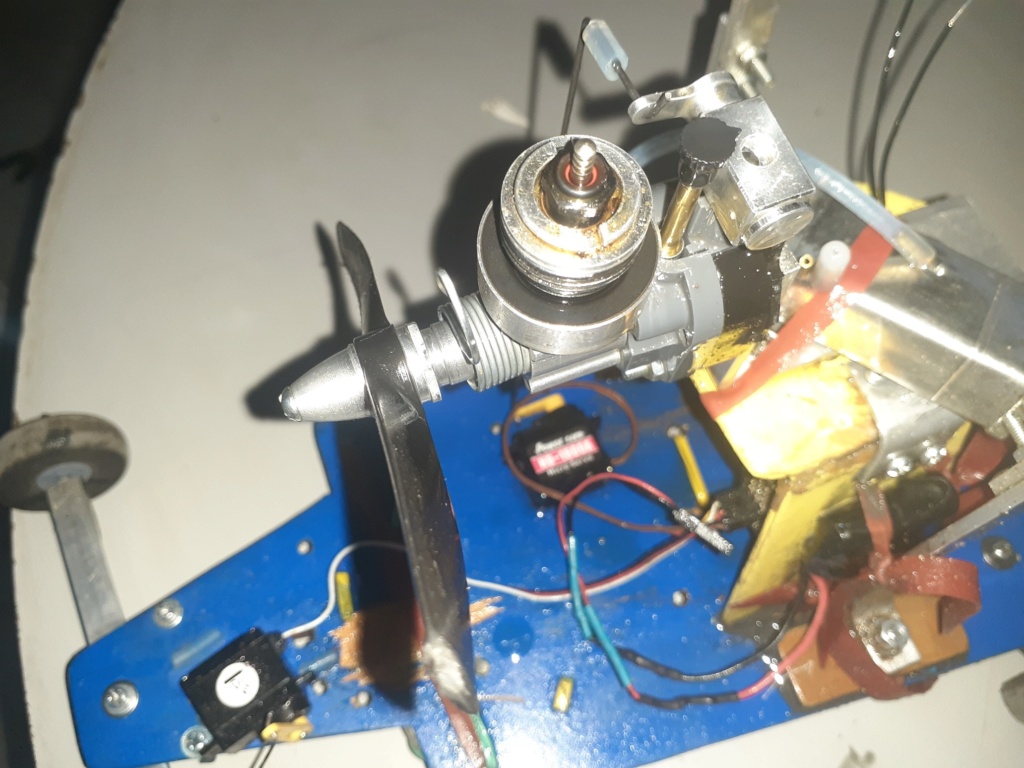 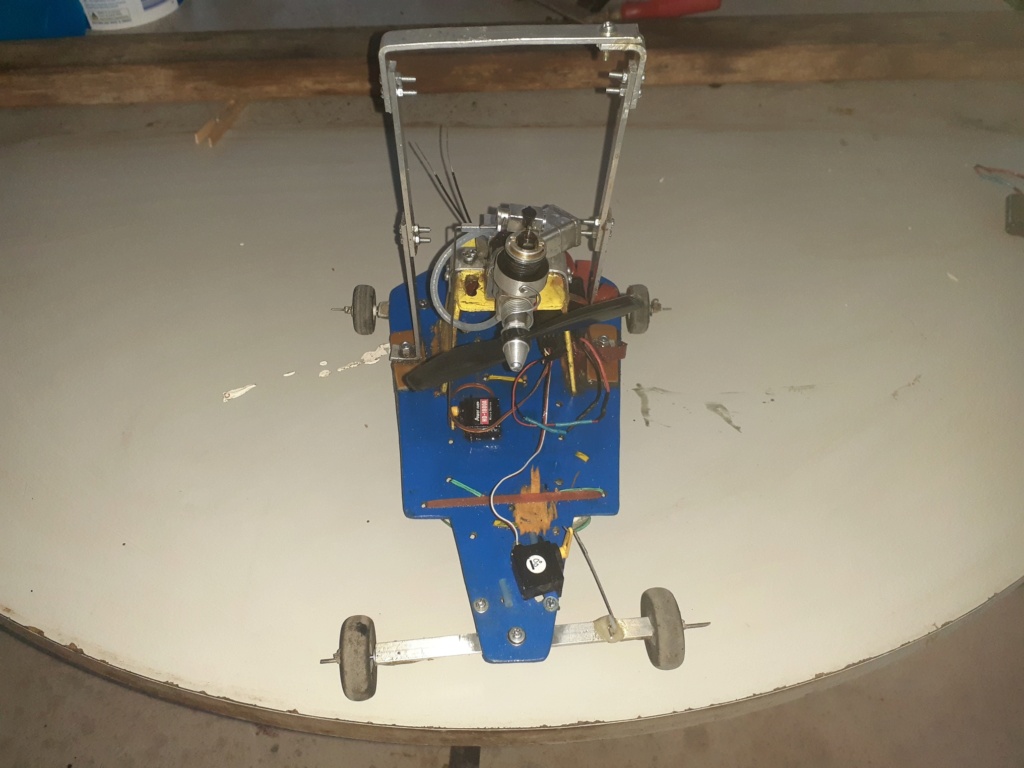 I have builds on the go for a hovercraft and a boat and both of these will be using the backplate throttles!

I have used them in much higher rev applications with Kamtechnik Head, turbo plug, high nitro etc. And the results were still excellent!

I was experimenting a couple years ago with the combination of the choke
type throttle and exhaust throttle. The purpose was to prevent loss of  the peak rpm because of the need to use a COX conversion head having a hot plug for sustainable idle (as we know COX conversion heads rob a few hundred rpm-s), and also achieve a good idle.

The exhaust throttle was connected to the control arm of the choke throttle, and this latter to the servo. 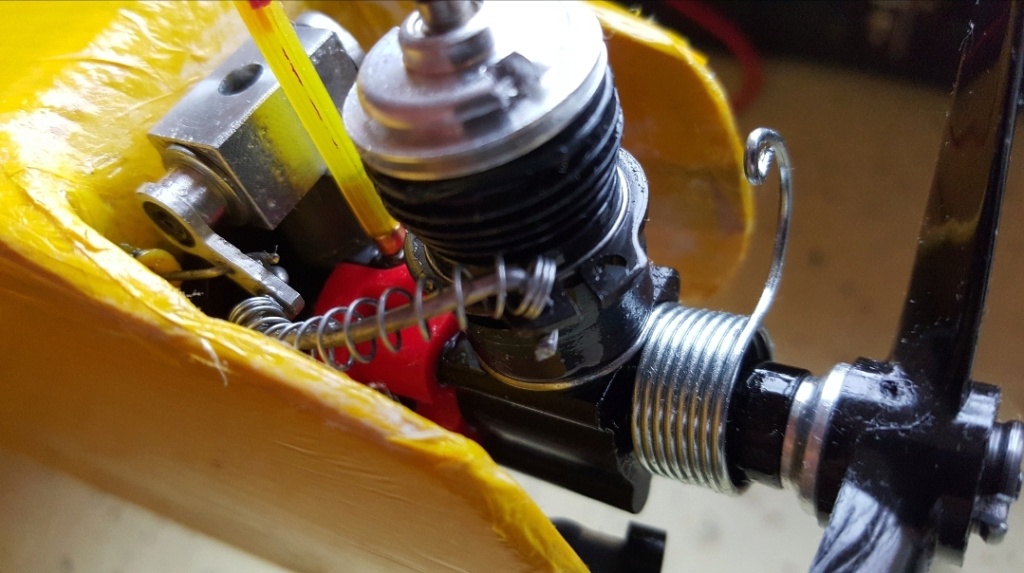 When the choke and exhaust throttles are fully open, the engine revs as fast as a high comp COX head allows. When throttled, the exhaust throttle will retain the cylinder heat, and the flame does not go out under the cooling effect of rich fuel-air mixture. The results were quite good, so much that I dressed up a TeeDee with this combined throttle set too 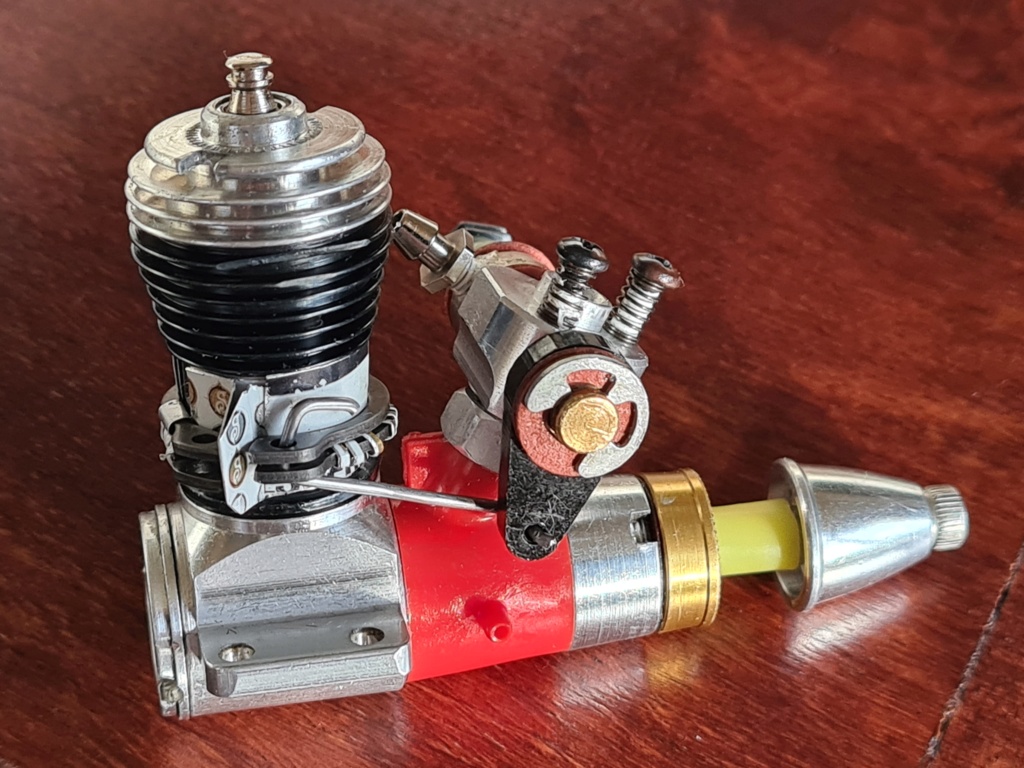 I see, András that at idle, you have tamed the unmuffled Tee Dee. 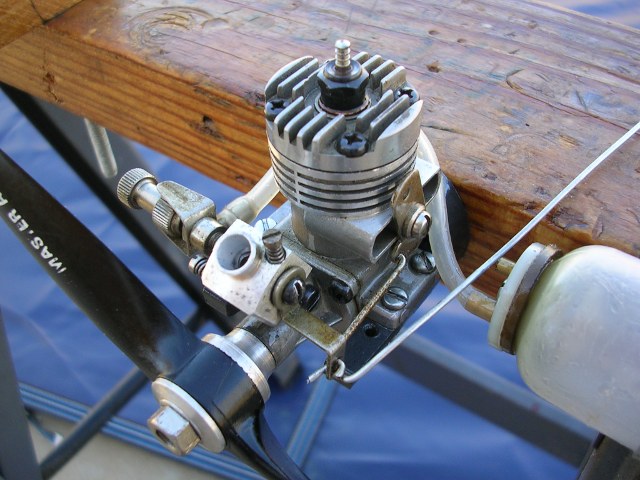 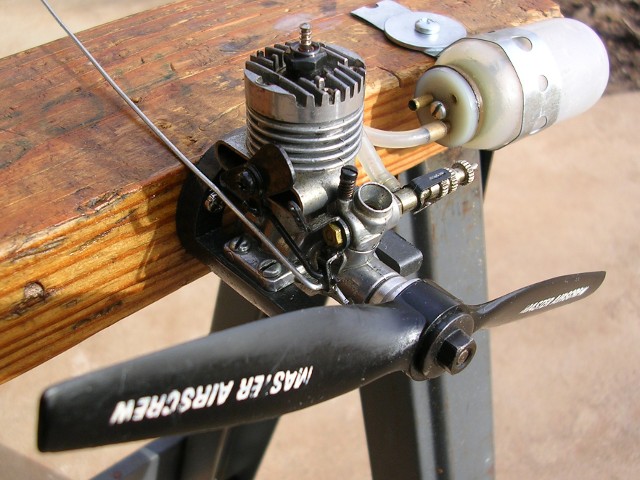 What I find interesting is that with these one exhaust port engines, at full throttle they are no louder than an unmuffled Cox .049 engine. But at half throttle or less, they are just as quiet as a muffled engine.

The OS Max .10R/C is a really nice engine, because it only weighs 3 ounces, a good upgrade for that anemic .049 reed valve powered plane.

What I find interesting is that with these one exhaust port engines, at full throttle they are no louder than an unmuffled Cox .049 engine. But at half throttle or less, they are just as quiet as a muffled engine.

I have several engines with exhaust baffles -- I was always intrigued that they could still run with the baffle closed.  I suppose there was enough exit area due to leakage and the tiny hole in the baffle.

BTW, thanks to all of you with your comments on the throttle body. I have a pot full of Sure Starts that I bought up when they were being sold off at $6.99 -- some may be runners and some are poorly fitting, probably all parts bin engines.

GallopingGhostler wrote:What I find interesting is that with these one exhaust port engines, at full throttle they are no louder than an unmuffled Cox .049 engine. But at half throttle or less, they are just as quiet as a muffled engine.

I have several engines with exhaust baffles -- I was always intrigued that they could still run with the baffle closed.  I suppose there was enough exit area due to leakage and the tiny hole in the baffle.

There is a small amount of slop in the fitment of the rotating exhaust baffle on the OS, so exhaust gases do leak out around it during idle without any apparent problems. On the Enya, it also has a small hole about 1/16" in diameter, for exhaust gases to exit during idle, along with the edges around the exhaust circumference. Exhaust gases burble out without any problems, but with sufficient back pressure to maintain stable idle.

andrew wrote:BTW, thanks to all of you with your comments on the throttle body.  I have a pot full of Sure Starts that I bought up when they were being sold off at $6.99 -- some may be runners and some are poorly fitting, probably all parts bin engines.

I bought 2 Sure Starts from that same sale you did, Andrew. Fortunately, they both seem to have adequate compression. I suppose for some of the poorer fits, one could resort to all Castor fuel, and allow some Castor varnish to help with "fit". Good luck in your retrofitting these with the choke tube throttle assembly.