The recent thread on the Cox FW190 got me motivated to build this one. The plan looks good, but the non-availability of the Cox foam wings is an obstacle for builders.

Thanks to GallopingGhostler and 944_Jim for linking to threads on Stunt Hangar. Following the links provided crucial dimensions for the wing, and a pdf file of the plan.

With this information, I can duplicate the wing in balsa, making for a straightforward build.

I have the fuselage and tail parts cut out, but still need rib patterns to build the wing. My draftsman is slacking. 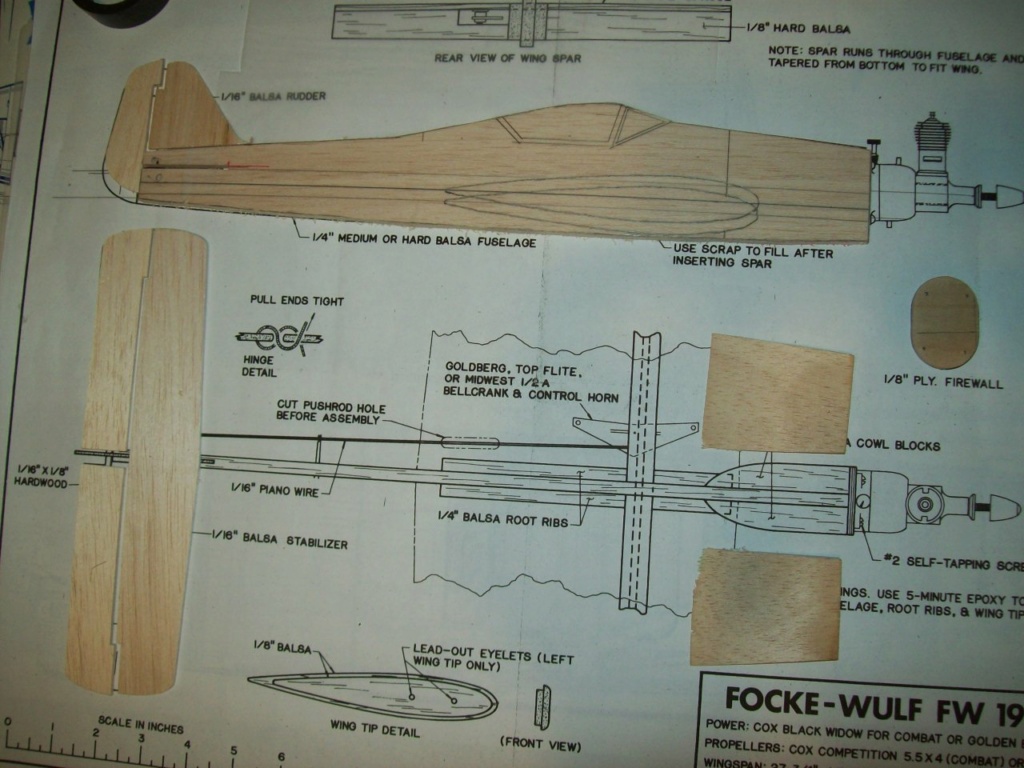 I have always liked the shape of the FW-190 and your rendition shows it very well. Nice balsa selection too. I gather it's going to be profile?

It would be foolish to make tapered ribs. Make the wing a constant chord wing and offer tapered flaps. 1000 times easier to do. I wouldn't even put a spar in the wing as I would offer it a solid leading edge which would be all the strength it would need.

Duane,
I can't believe how fast you go from thought to design to execution!

Is the wing tip detail at full scale? How about the cutout in the fuselage for the wing? Print off those views in full scale and trace onto Formica or 1/16" plywood...then sandwiched/stacked plates and a sanding block.

Always a pleasure watching your builds

Ken, Yes this will be a tapered wing. My intent is to replicate the shape of the Cox foam wing exactly, in order to build the model as it was designed.

Levent & Jim, Thanks for the hints on tapered wings, but I got that covered.

I drew this up this morning. It is the same dimensions and airfoil as the Cox wing. I added “sorta  FW-ish” tips. They look better than the flat plate style shown on the Cox plan.

It will be built upside down over the plan, that,s why the leadouts are on the "wrong" side.

What can I say? Oh yeah...subscribed with notifications!
WooHoo...Go Duane!

My draftsman is slacking. wrote:

Bull i think your draftsman is right on time from that drawing !

A little more progress to report on the FW. I got the wing built. 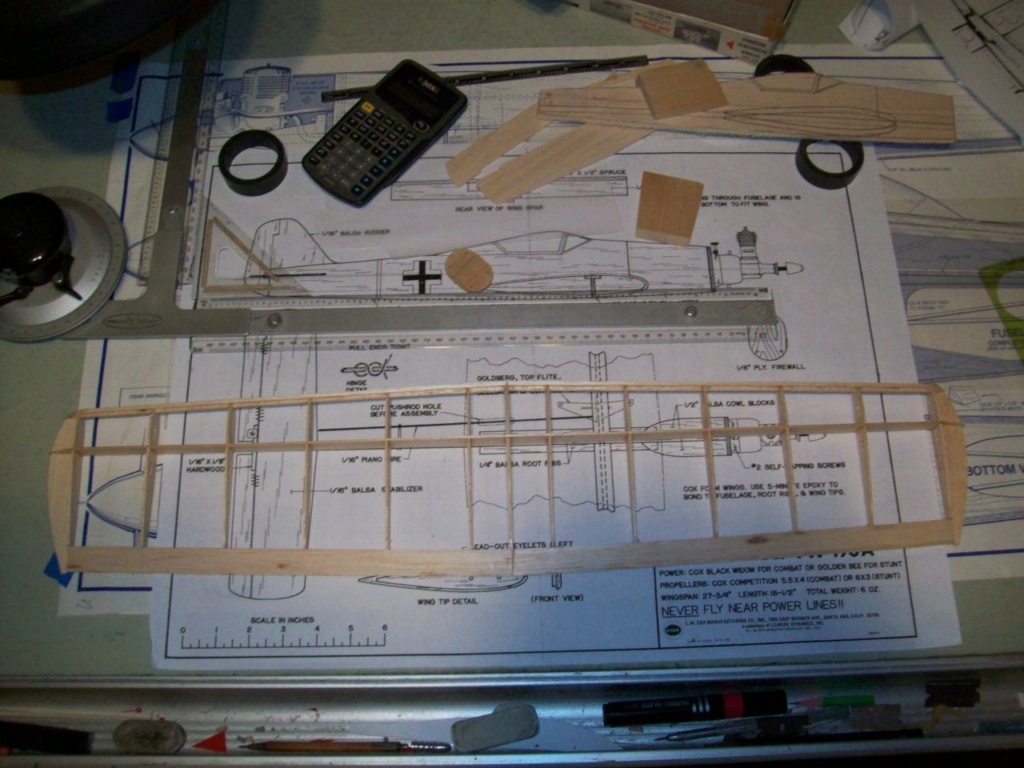 I’m finding out that I’m terrible at taking pictures of the build in progress. I just don’t think of it while I’m working, then when I do, I’ve missed interesting stuff.

Here is the plane taped together for a portrait. 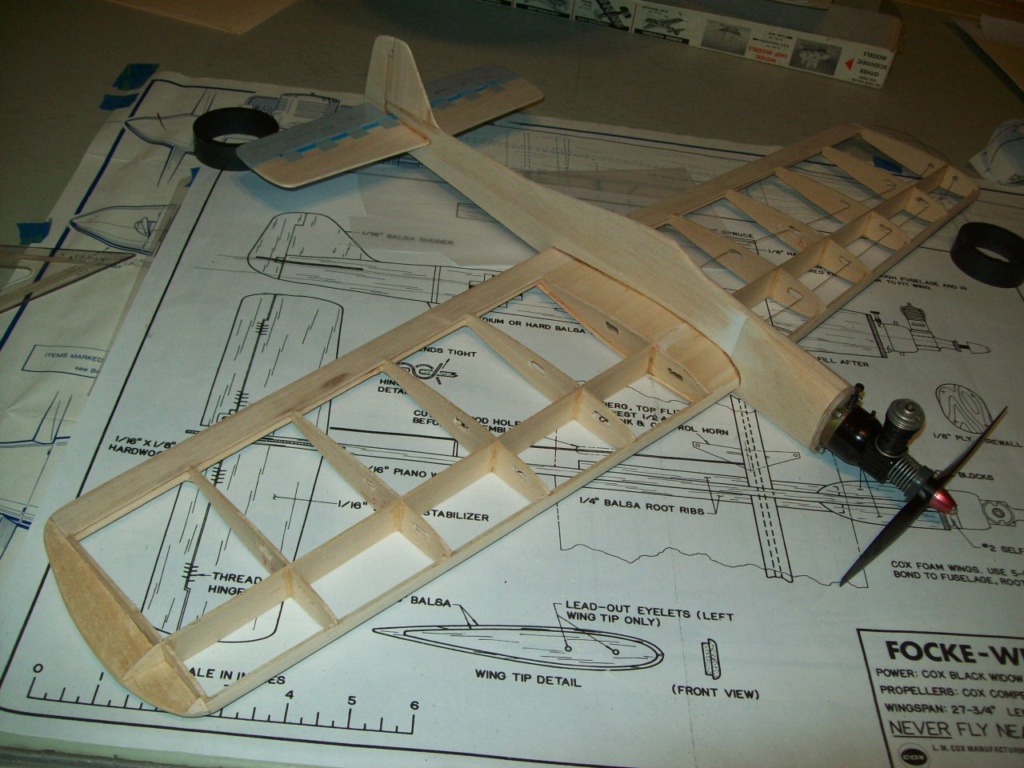 All the pieces stacked on the scale. Everything is here but the tip weight and the covering. I'm pretty happy with the weight so far 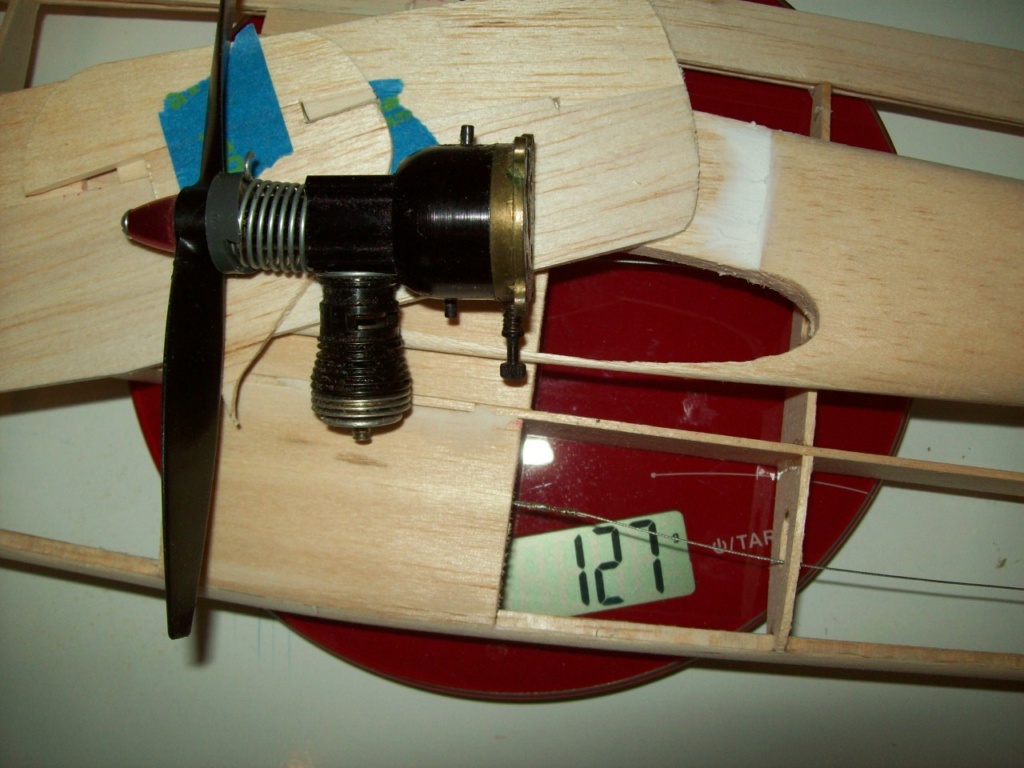 Man! I'm digging this build. How do you find the time to do this? Only a few months ago you knocked out the Top Flite Junior Aces Trio...and  now this. I'm embarrassed by my stalled projects.

If I remember correctly, the Foam Wing one was six ounces and change. You may just beat that.

Jim, you're still working full time, and I'm not. I've always been a serial builder, and these small profiles go together quick.
My weight goal for the FW is 6 oz. It's looking like I might make it for a change.

"I’m finding out that I’m terrible at taking pictures of the build in progress."

It's a good habit to get into.

My long ago scratch built P-38 put together 50+ years ago went pictureless and I regret it as I have forgotten how I did much of it.  I would like to duplicate it today and have the wings built but I can't remember how I did the rest of it, so it sits. 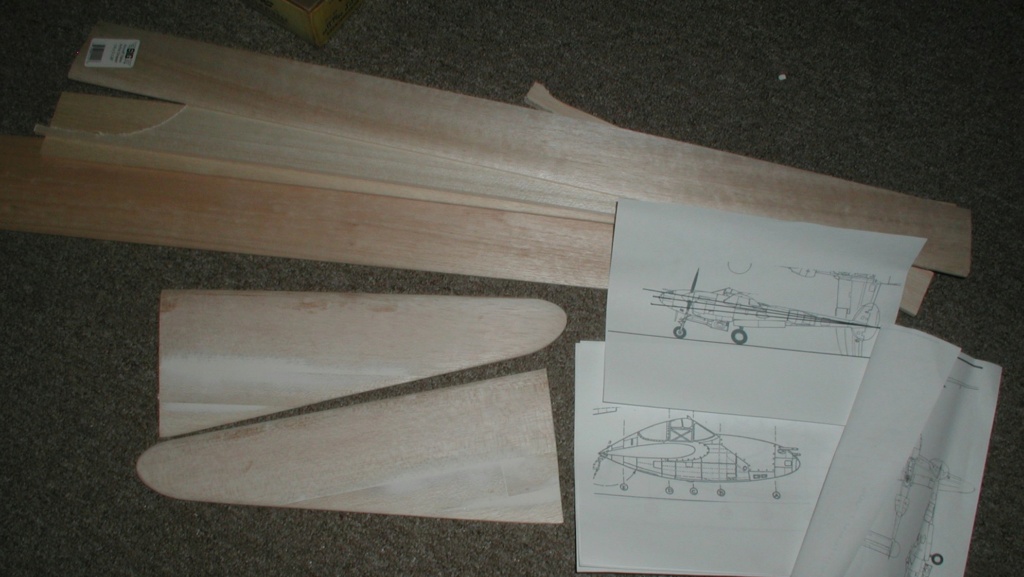 I bought a bunch of cheap cameras on ebay, mostly Olympus C-3000 some for a little as $5.00 and hung them all over, workshops, tractors, ATV's where they are always available.  When you get old, gray and used up like me you will appreciate the history and nostelgia they provide. 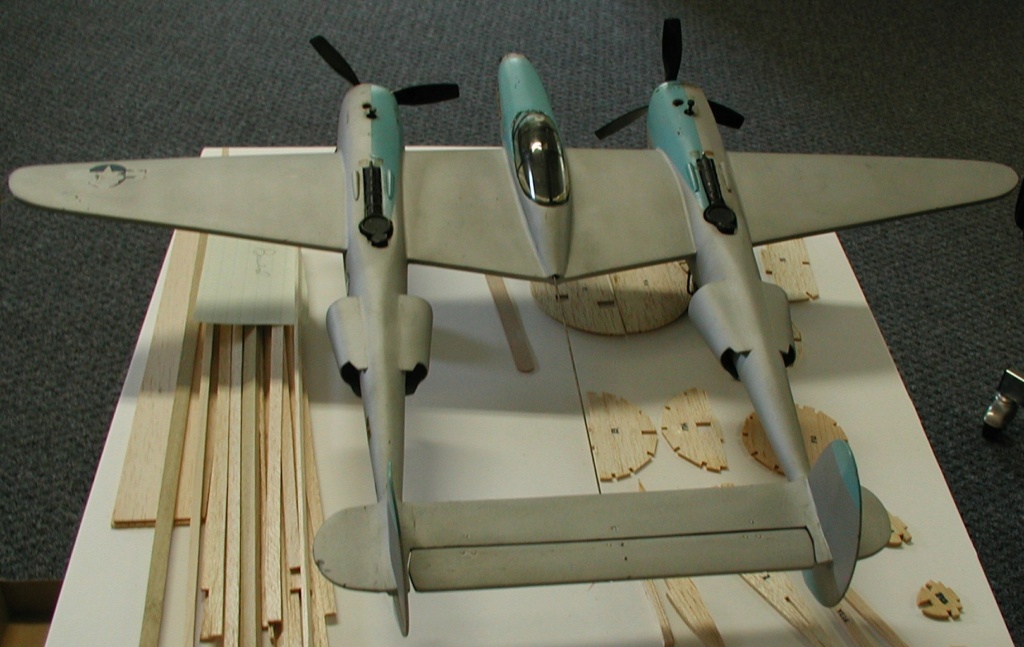 A little battered today, it's my most flown control line airplane.  Lot's of encounters during WW2 with your FW-190.

Hello , the wing looks good , do wish i new how those ribs and the wide spar? is put together i like the looks alot . Did you say you got a PDF of just the wing ? Would like a copy if not to much inconvenience .

Eric, the ribs & spar are notched, so the ribs just slide on. It is the same method used on the Baby Flite Streak and Top Flite Junior Aces. For a pdf of the wing, PM me an email address. It may take a bit because I want to test fly it first, in case revisions are needed.

I got the markings finished up this morning. Finished weight came out to 5.8 oz., so barely under my 6 oz. target. 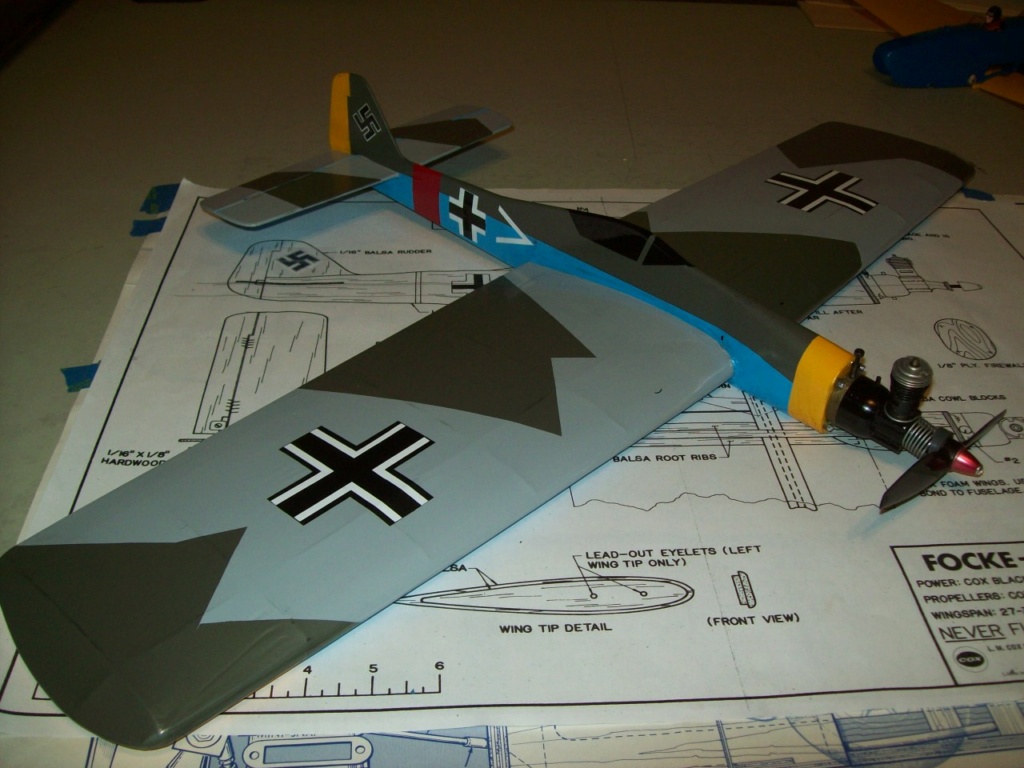 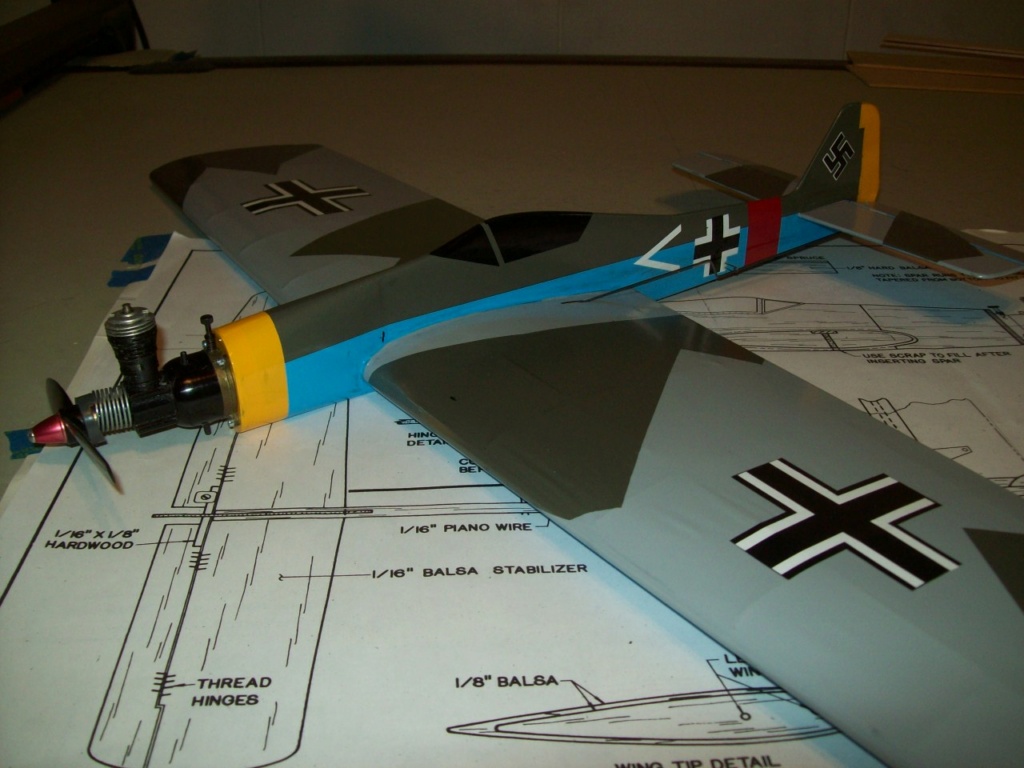 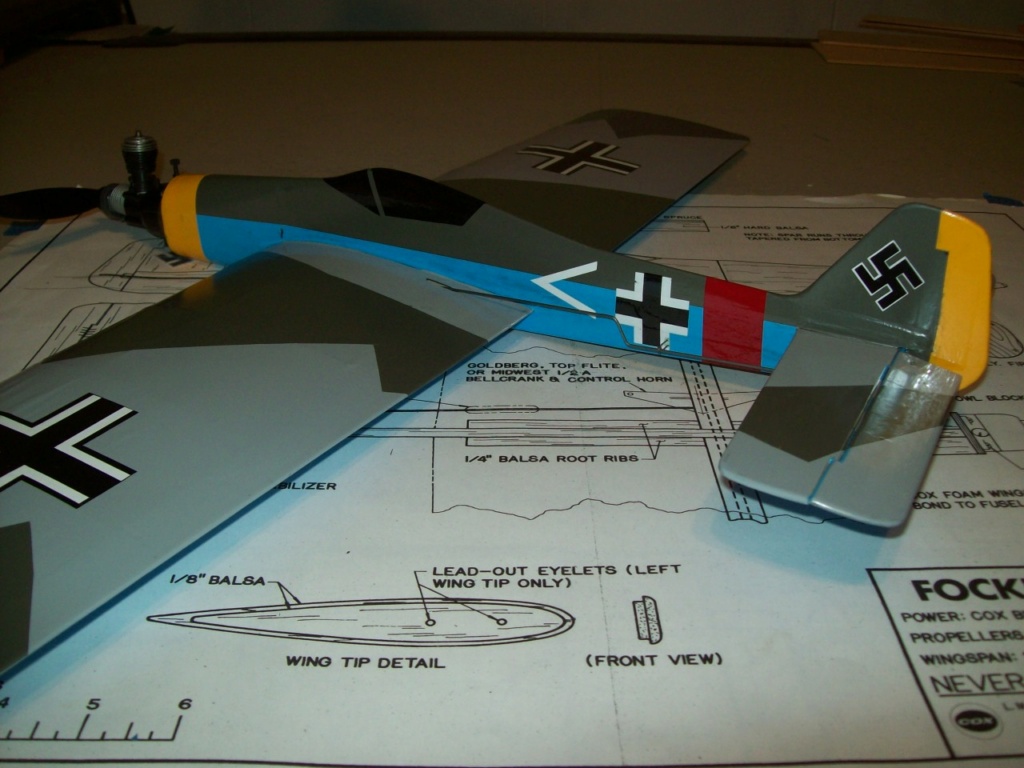 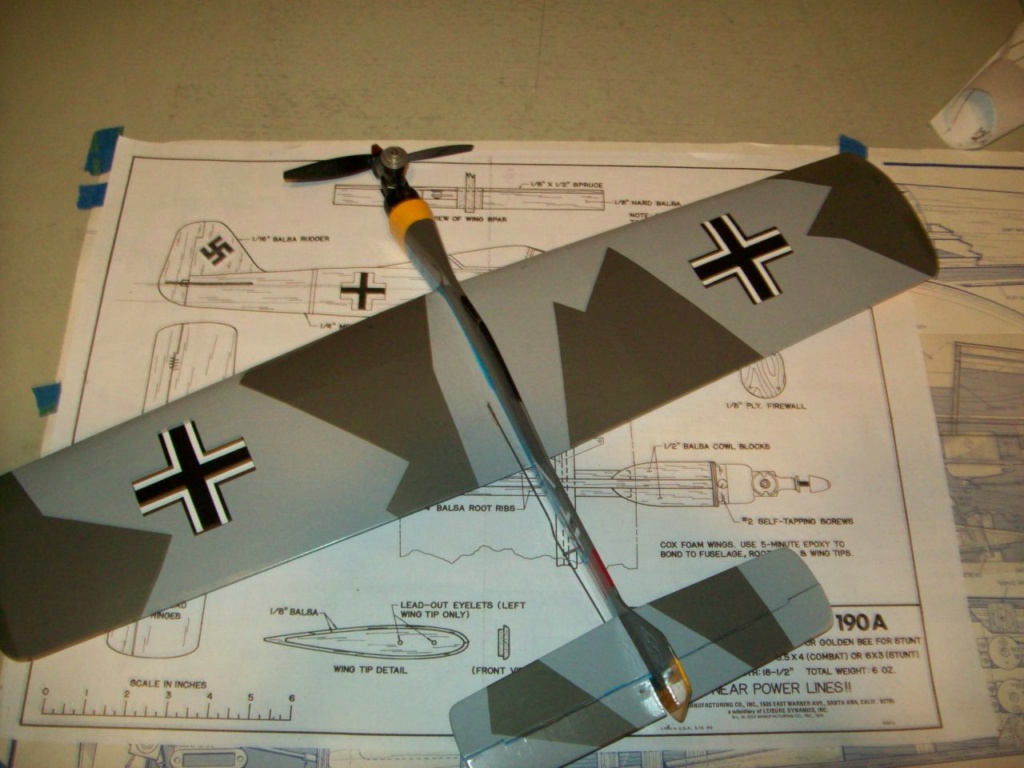 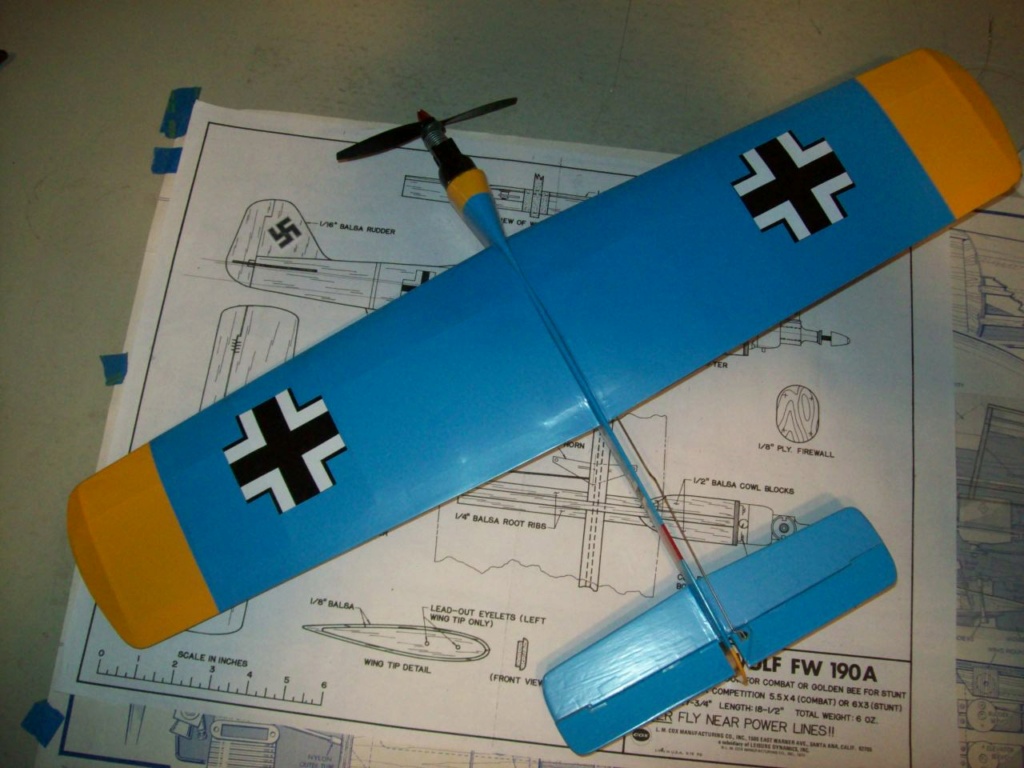 Both look great, especially the camoflage job. Colors match perfect and I like the sharp angles. Did you take it from an actual FW-190?

Hubba-Hubba! Man, that is beautiful.
And you beat the factory weight.

When is the maiden?

When you hang it by the lead-outs, how does it hang?

Man,you do nice work!
Let us know where you start out with the CG and if you have to add any nose or tail weight. I checked my plans and there is no indicator for the Balance Point, or CoG. I'm guessing it should fly right off the plans if no balance point is shown.

Marley, it concerned me also that the Cox plan gives no recommended balance point. My actual balance point came out to be 1/2" back from the LE at the center. You can see my Sharpie marks here. 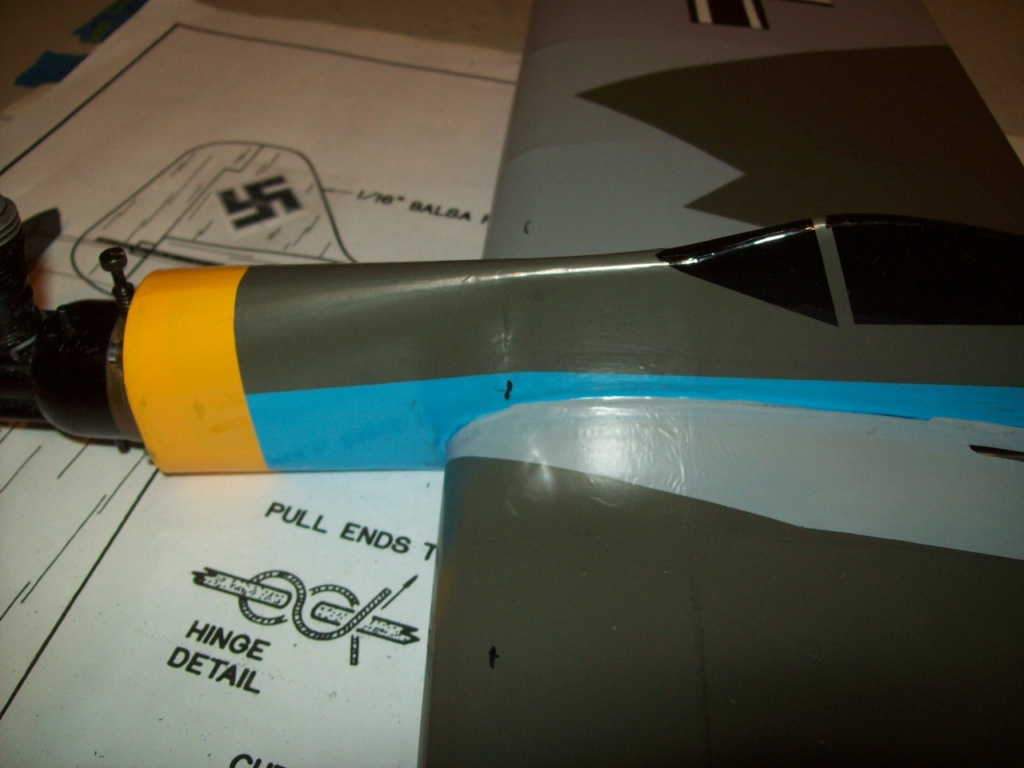 This seems quite far forward to me. It does help explain why the leadouts also seem far forward. When we do the hanging test, it all works out. 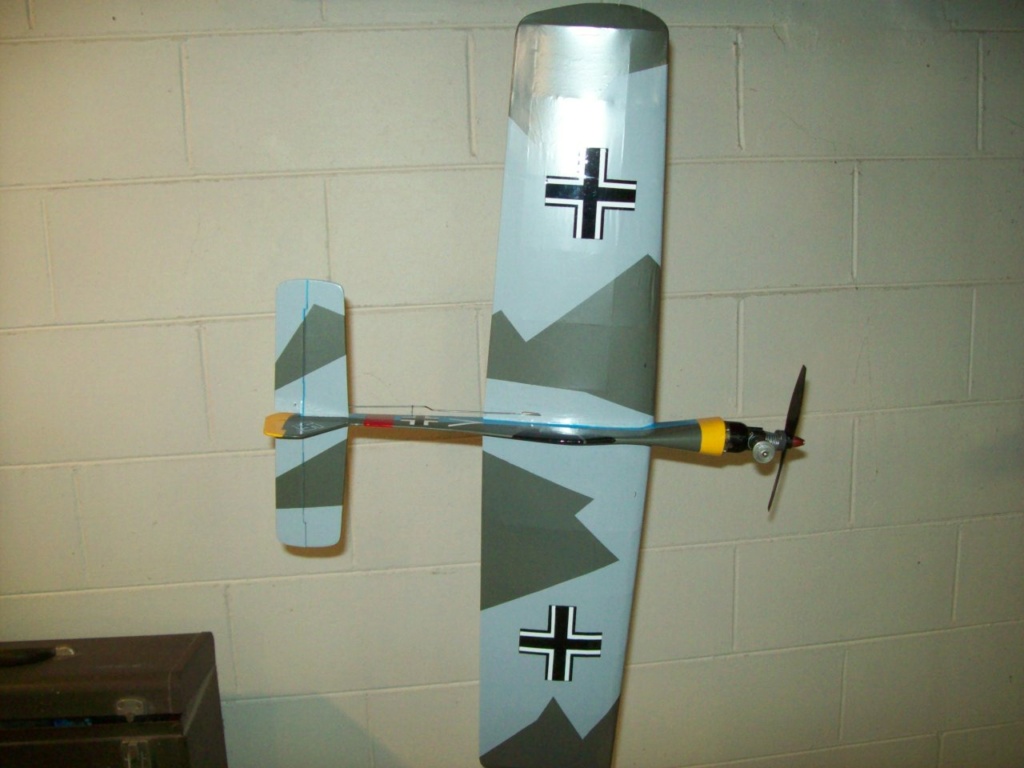 The maiden could be as soon as tomorrow, if this crazy weather will settle down. We had a tornado warning today, unusual for Aug.

p.m. sent , I didn't know you were building two ? I guess i missed something ?? They both look very good and hanging at a nice point

No, there's only one airplane. It's done in faux German markings. Camo on top, blue bottom with yellow recognition bands on the tips.

getback wrote:p.m. sent , I didn't know you were building two ? I guess i missed something ?? They both look very good and hanging at a nice point

Got me too Eric, but I should have known better, camo up, blue down.

getback wrote:p.m. sent , I didn't know you were building two ? I guess i missed something ?? They both look very good and hanging at a nice point

Got me too Eric, but I should have known better, camo up, blue down.

Same here -- I finally realized it, but it took a double look!

duaneh wrote:No, there's only one airplane. It's done in faux German markings. Camo on top, blue bottom with yellow recognition bands on the tips.

Now that is True Camo !! LOL

Test flew the FW Sunday. My first impression was "Man, this thing is fast!" The engine is a new-to-me Black Widow, and it really turns up. Line tension was good. Maneuvers were smooth, but larger than expected. After the engine quit, it had a good glide, but dropped its nose when it slowed. It also passed the stress test when a pullout from an outside loop was about a foot too low. It was really hauling, and there was no damage from the high speed inverted landing. (Except the prop.)
I think the CG could be a little further back, but it's OK the way it is. A very fun airplane to fly.