Log in
Search
Latest topics
» Micro 12VDC Generator with a Cox .049 Sure Start Diesel Engine
by StevenStanleyBayes Today at 3:48 am

» Anticipation is making me (wait ) Carley Simon
by rsv1cox Today at 3:37 am

» Buried treasure in Burma
by Admin Today at 1:52 am

» music vids.. some of your favorites
by Levent Suberk Yesterday at 10:57 pm

» Cox Jeep Engine service
by Admin Yesterday at 6:49 am

» Cleaning Chromed Plastic?
by sosam117 Yesterday at 3:06 am

I didn't think I'd post this acquisition yet, but enough interest was generated as I stepped all over Bob's junkbox post...so here we go!

This kit popped up on eBay several weeks ago. I shot a quick email  to Dave Cowell of DPCModels to see if he wanted it in his offerings, and he replied faster than I typed the email.

So I waited and watched the auction until the appointed ending time and sniped it for not enough to worry about how to share the goodies. The auction showed a box with a bit of tape damage, complete plastics, some woods but no wing, and the plan sheet.

First order of business was to inventory what I got. Then the plan sheet went to work with me one morning so I could scan it on our large format scanner. The smaller parts were then laid-out on 1/4" quadrille paper and scanned at home. With a 100% full-size reprint of the plan sheet and the quadrille/small parts validated by overlaying originals on copies, the digital parts were sent to Dave.

Then the summer ran away with other things. However, this weekend I just found enough time to begin casting bucks from the terribly dry, cracking plastics. Exhaust pipes took two tries. The canopy popped out easily. The money-piece was a very delicate operation, with the follow-on pictures showing how I had to buttress the tired plastic into a mold strong enough to handle. Fortunately it took only one try with the canopy and cowl. I'll weigh the parts over the next few days. The bucks will be sent once they stop losing water-weight as measured on my digital scale. More to follow shortly. 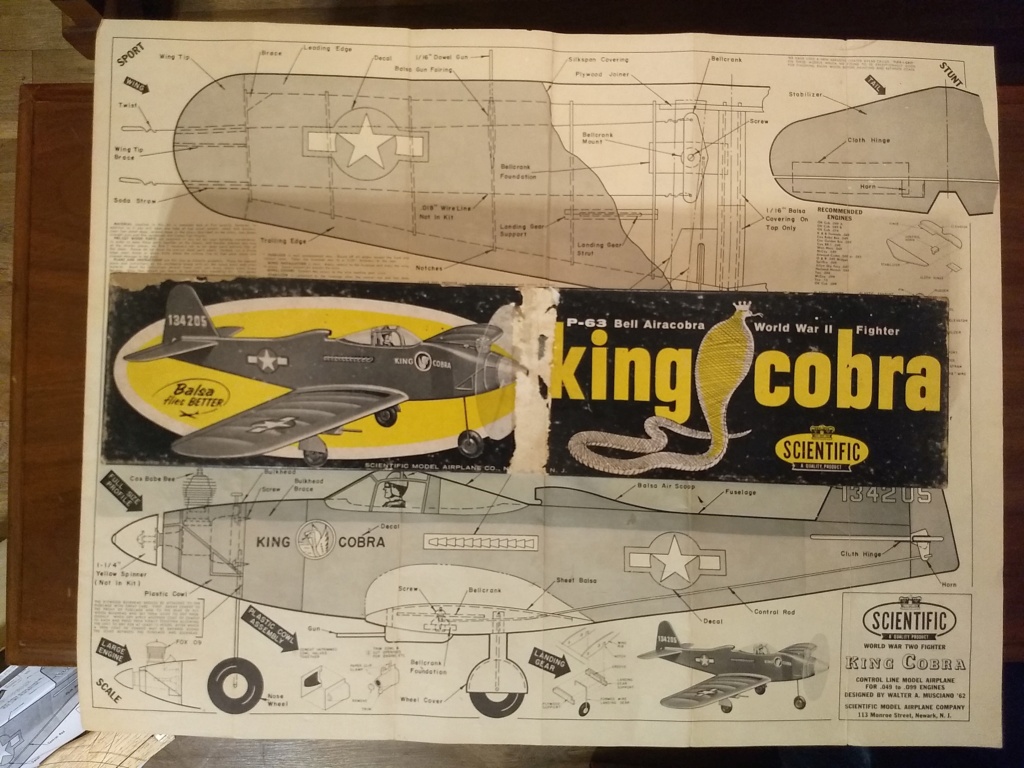 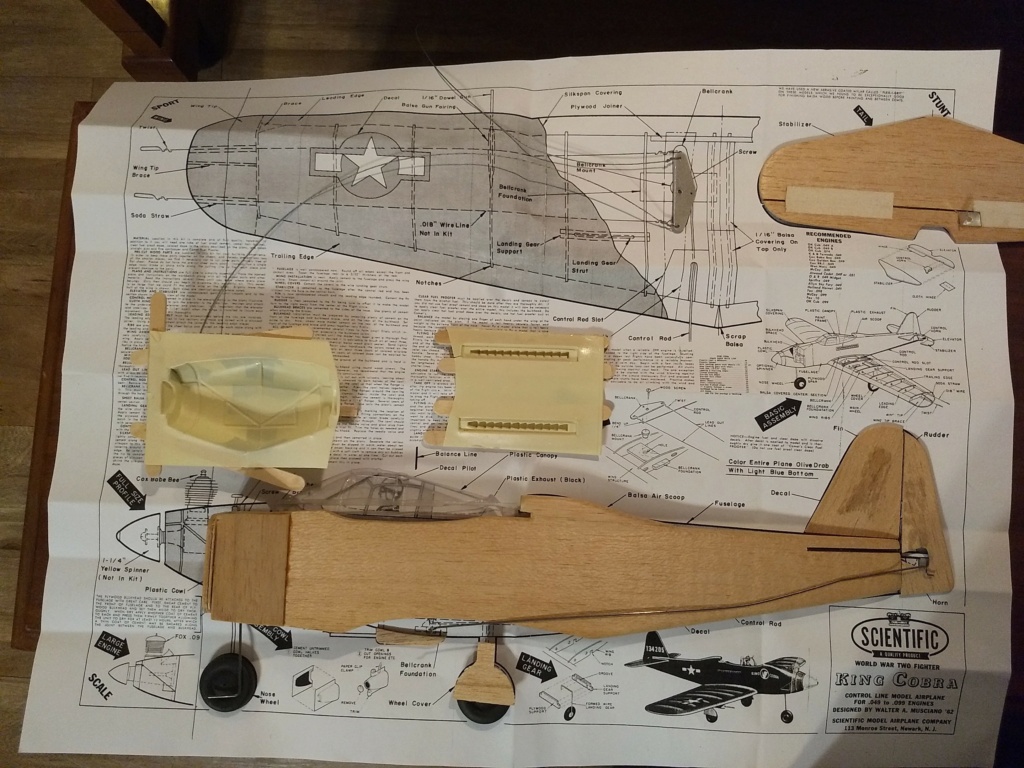 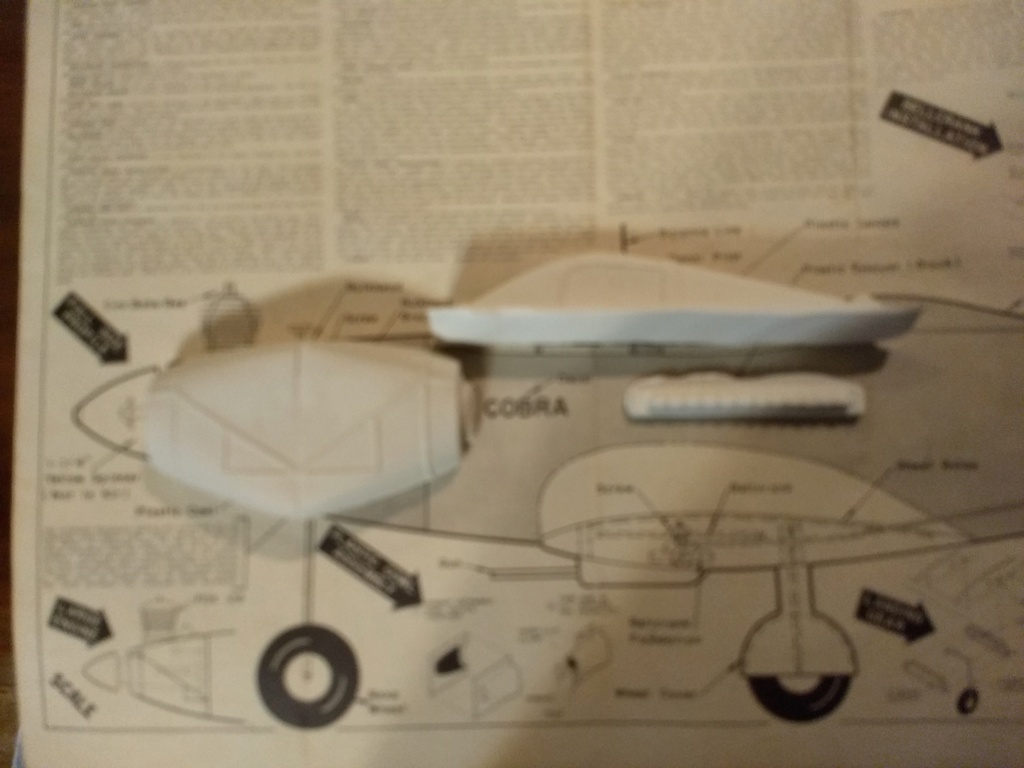 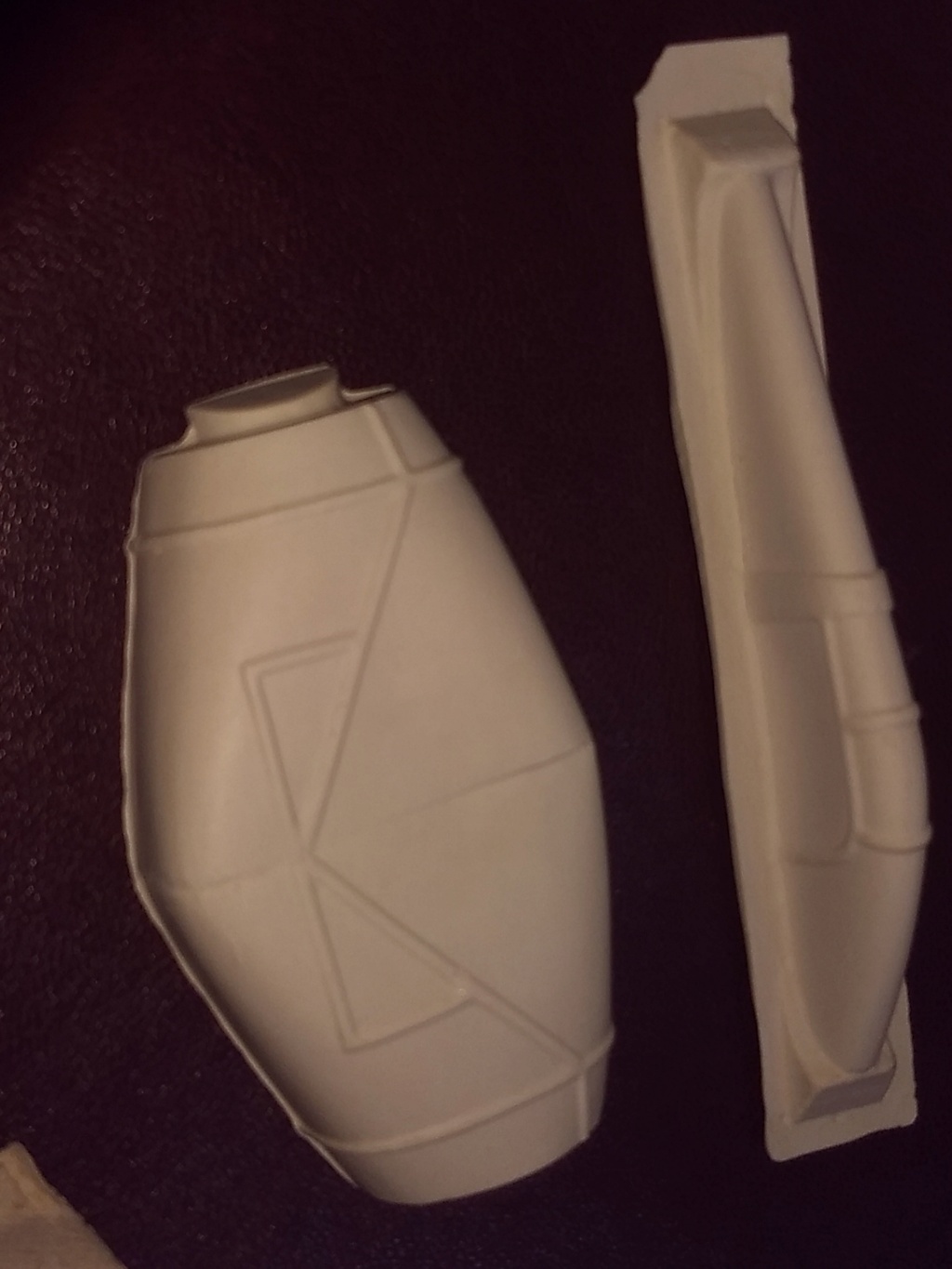 So here are the similarities between the King Cobra and the Super Mustang. The Super Mustang was printed in fresh, new paper, and then placed over the sepia-toned (well, old) plan sheet.
Wings are the same except for two things. The tips are different, and there are two ribs in each P-63 wing that have notches cut for the wing-mounted landing gear. Side views of both planes show the same root rib shape. The overhead views show same length ribs, leading edge, trailing edge. Recreating the missing wing parts will require no more effort than tracing the Super Mustang wings, and then engineering the landing gear mounts and notches. No big deal there. 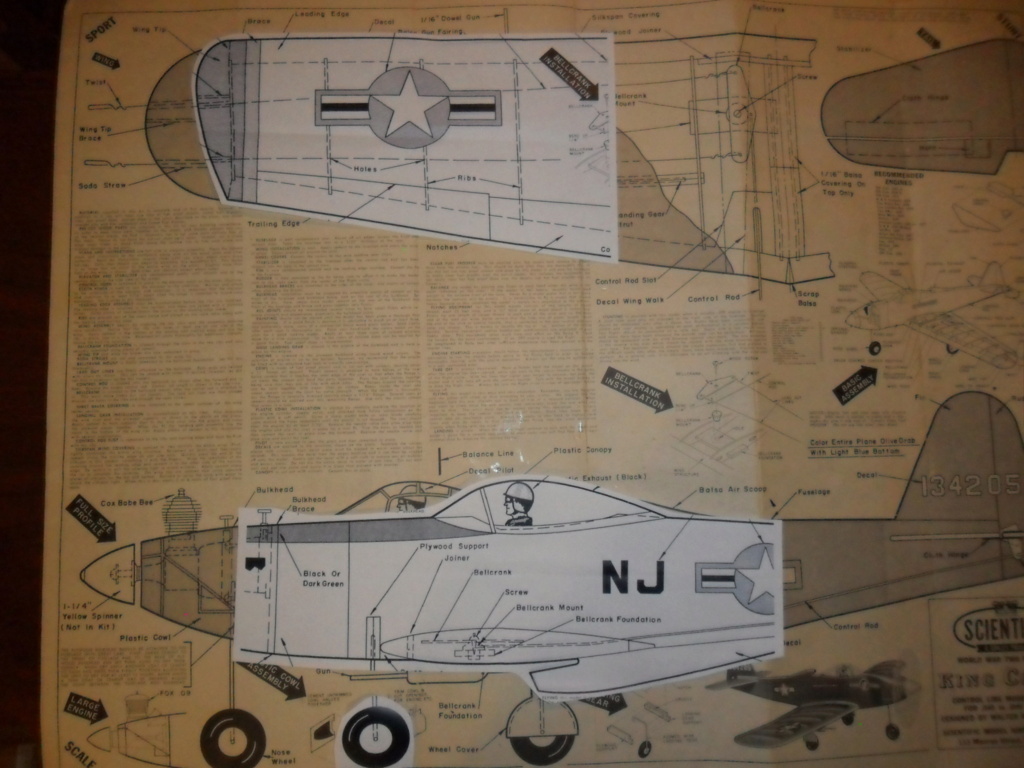 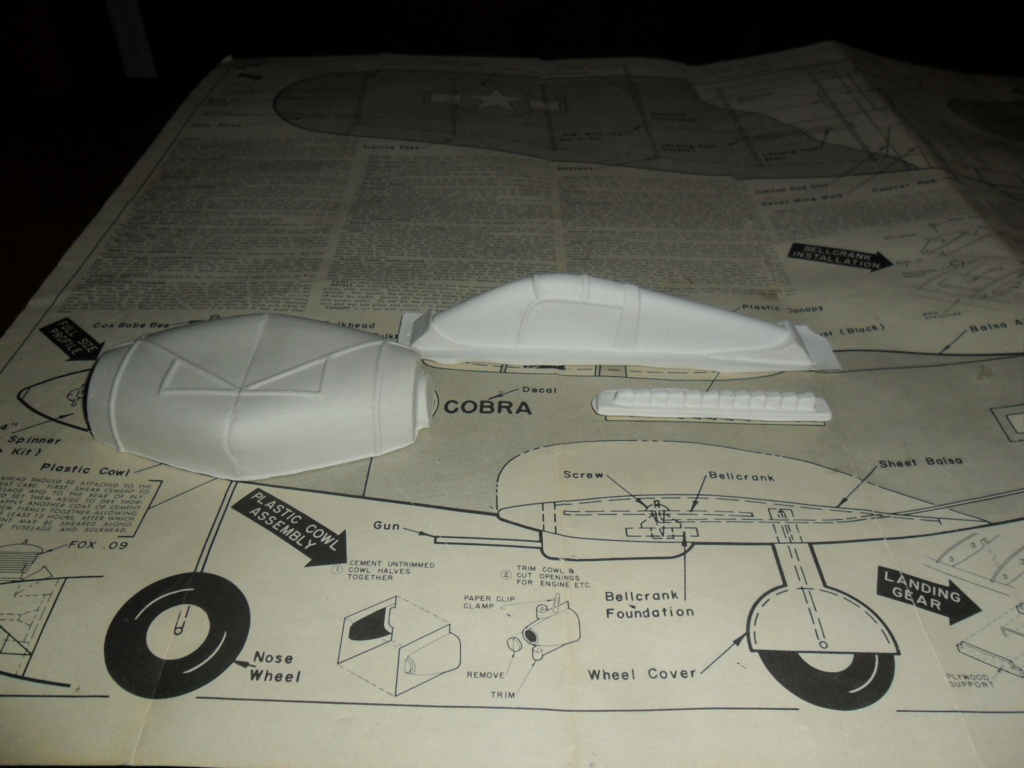 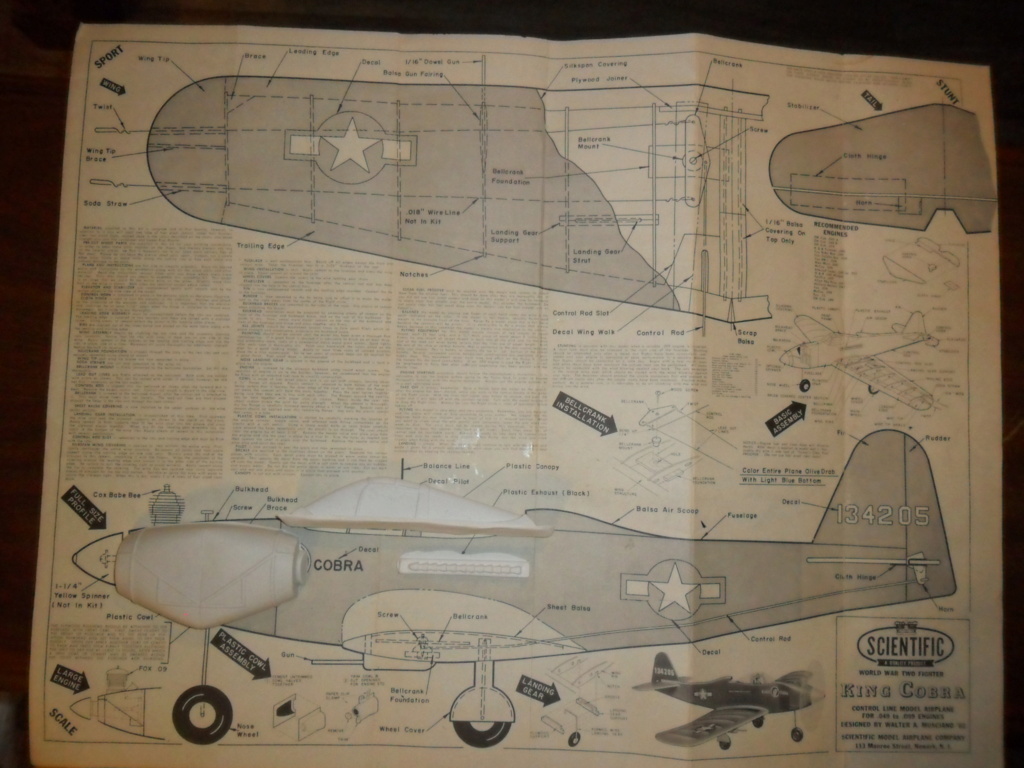 Thanks for posting those photos, Jim.

So, it existed in the flesh although short lived, perhaps not as popular because it had substandard performance in WW2 compared to the P-51.

It was more popular on the Russian front, they made good use of it as an attack aircraft and AFAIK, they performed better without all the additional armor around the pilot, which weighed it down and caused performance to suffer.

I thought it interesting that they didn't make the cockpit clear, as they did in other models.

For us kids, clear canopies were a prized item to have on an airplane kit.

No one likes to look through painted windows.

A person could simply eliminate the plastic vacuum formed canopy and just use balsa sheet for it.

An interesting feature of the kit is the wing's symmetrical airfoil.

I thought it interesting that they didn't make the cockpit clear, as they did in other models.

For us kids, clear canopies were a prized item to have on an airplane kit.

No one likes to look through painted windows.

A person could simply eliminate the plastic vacuum formed canopy and just use balsa sheet for it.

An interesting feature of the kit is the wing's symmetrical airfoil.

Hi George,
I did the posts too quickly, and for that I apologize. What you are looking at in white are the plaster bucks going to Dave Cowell. The exhaust plastics and engine cowl didn't fair very well making the bucks. I actually had to repair the engine cowl before the pour. The kit canopy is clear, and still quite useable as is...again, you see bucks above.

You are correct, the cowls were a big draw for my boys too! They did do a single color profile fuselage/flat- plate wing trainer first. Pics of them building their Scientifics are some place here.

However, the slightly larger profile P-40 Warhawk (like Richard Fleming's on StuntHangar: https://stunthanger.com/smf/12-a-building/1960-scientific-p-40-warhawk/ and mine  https://www.coxengineforum.com/t11364-1960-scientific-p-40-profile-kit ) has the symmetrical wing at 21", then the Super Mustang and this King Cobra with the same symmetrical wing.

I'm glad you enjoyed the pictures.

You're welcome, Jim. Those Scientifics, if one enlarged it to the point of having about 150 square inches of wing area would allow a weaker .09 class motor, like the A.C. Gilbert .11 Thunderhead to populate the cowling.

Jim, those Scientific plans and your overlays are terrific. They really illustrate the similarities between the two. I'm nutz over Scientific plans saving most of my old builds. I wish that I had saved them all.

I asked to have one of the first, if not the prototype kit. This should turn out very well.