Log in
Search
Latest topics
» Micro 12VDC Generator with a Cox .049 Sure Start Diesel Engine
by StevenStanleyBayes Today at 8:48 pm

» Anticipation is making me (wait ) Carley Simon
by rsv1cox Today at 8:37 pm

» Buried treasure in Burma
by Admin Today at 6:52 pm

Another one ready for the Weekend

Another one ready for the Weekend

Just finished putting the controls on this one and mounting the tank. Ill choose the engine after ive flown a few other planes and mount the TD 049 thats going the hardest. This plane is my own design scratch build and has been slowly evolving for some time. I had a few things I wanted of the plane as it has evolved. It needed to be able to OWN 42 foot lines so as that I could have more sky from which to build up speed before I tent peg it.

It needed to be able to do loops, wingovers, horizontal eights, and all of them with out needing a lap to regain speed in between. And fly inverted. That all covers my skillset and it can certainly do that. Ive increased the wing area on this one and extended the rear fuse to see if I can tighten up some of the maneuvres without mushing. Ive also increased the long centre fin, which serves two purposes. to strengthen the fuse as it gives an I beam type effect to the fuse, and to help with stability overhead. ---- yes, I could buy a laser cut kit and get a plane that does all of that and does it better. But i like doing my own in increments and see where it goes.

The increased wing area will be interesting as it has little effect when flying level as it is a slab 2.5mm wing and the fuse is basically slab style 2.5mm. but after a previous wing increment I think this one may be getting around the mark I am seeking.

a friend of mine, whome I used to race bikes with, also flies CL and he is a OS 35 or whatever up man. Lol. and always says to me these planes Im slowly building, changing, flying, testing look like Half A combat-speed planes on acid as they look to be erratically twitching all through the circle. He is always at me to put one of my enya 15 glow engines back into a dominator or liquidator and re find what its like to fly something sane.

but I like these little planes, the design is coming along well in respect to what I am looking for. they are starting to fly as I would want a bike to handle. they dont actually twitch. they simply go very fast, and respond very directly to control. The other thing they had to be able to do was launch from my launch table which puts some constraints on size and weight etc. 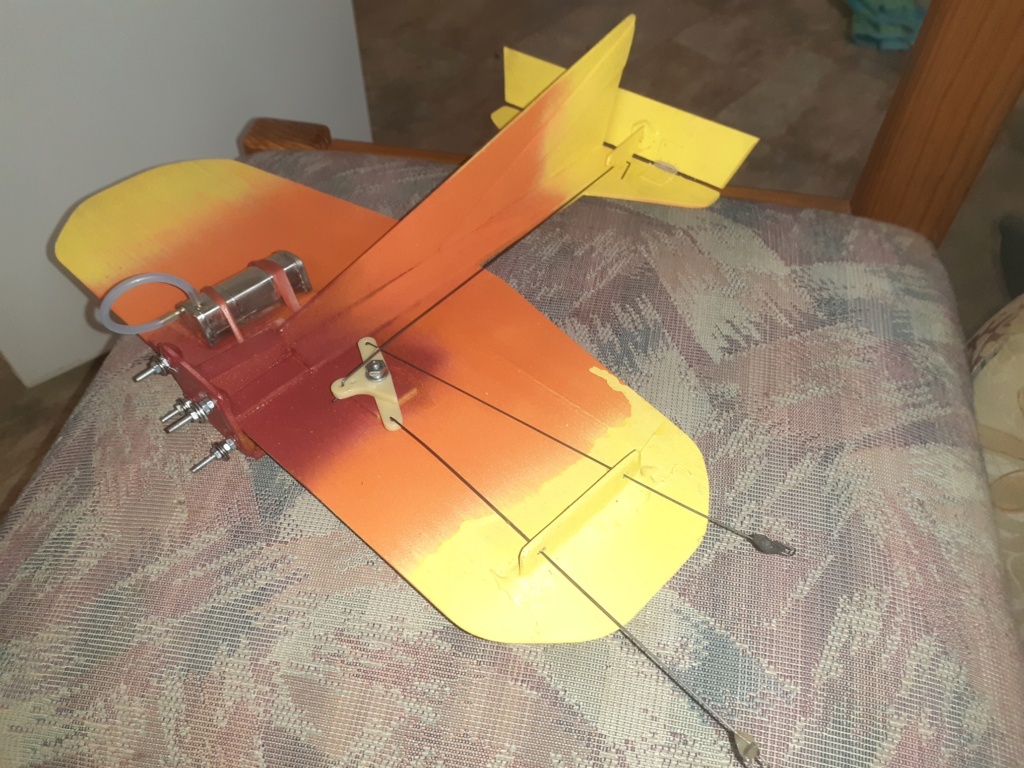 They are very quick, cheap and easy to make, unfortunately I have also now learnt that crashing them hard can result in wrecking a TD 049 which I just didnt realise could happen. when I was young I couldnt kill my enya 15 no matter how hard I tried. But I understand why some of the TD049s ive had, have not come out well from being tent pegged now that ive had a good look and think about their design. Which as with all designs is compromise. The engine weighs nothing and goes like there is no tomorrow. The results Ive had in some cases from tent pegging them is understandable.

As I build new ones and improve the design and improve my flying skills I will tent peg planes less and less. My friend will be at me again to finish and fly my enya 15 combat wing as he remembers when I was young it was extremely rare for me to crash one of my combat wings. Maybe he is right. Maybe there is room for me to do both. I just really like Half A for some reason, and unfortunately I like flying Half A planes that are built and handle as I would expect a custom built "Hills Boy racer" bike to handle.

Now I need to go cover the other plane with the modern SolarFilm equivalent. I would rather poke my eyes out with hot needles than do that job.

Just need the wind to co-operate this weekend. Half way through spring and the wind has been shocking!!! Time for it to change

Me and the boy are going flying this weekend come what may. Ive got four days off, and we are going flying again!!! Ive spent all day, running engines, checking them, running them..... and Ive got spare batteries, and spare battery boces and leads, and a shed full of Methanol, Nitro and Castor M.

I like your plane Yabby, looks a little like an upside down cake, but I understand why you built it that way. You put a lot of thought into it.

Hope that the weather co-operates this weekend and that you have a ball flying.

Thanks Bob, so do I. We will get to fly regarldess of the weather at least once. and the great thing is four days with my Lad where we can fly planes, go fishing in the boat, (no playing golf, cos im a very calm golfer, but he drives me mental when he hits off from the tee with a 1 wood right handed, straight down the middle, and then at the next tee does the same left handed. so no golf. Lol. )

and.... if he does, Ill just build him another one.

Nice Yabby, Yep, looks like it has race bike heritage…. I bet will go like that too!!! Give us a report on how well it did

I dig those colors! My normal flight circle tends to be over concrete with trees on three sides. Since a lot of my planes have been military, they tend to get lost in the tree line. That one would stay in focus all the way around.

I look forward to your flight report.

i really have to give credit to all of you that can and do fly over hard surfaces. I fortunately can fly over grass and sometimes very hard dry paddocks, but I think I would be too nervous to do more than go round and round over cement, or ashpalt, etc.,

I certainly hand it too you all that fly over hard surfaces.

Yes, the colour scheme stands out. Lol. the colour scheme is an unashamed way of painting it in an abstract sort of way where my total inability to paint and finish planes is not quite as obvious in the air at least.

It is not the sort of plane that requires intricate paintwork, unlike military aircraft and such, with such detailed lines and contours painted.

Weather is great today, hopefully it holds out till Sat,Sun and Mon, when we can fly inbetween fishing!

Yes, the race bike heitage comes out in the way I like to fly and paint my models, and I do spend a lot of time trying to keep my engines in really good condition and running really well - when Im not tent pegging them - I keep learning more and more about the little detailed really small things that maybe help my TDs run consistantly and hopefully last longer (often these are small things mentioned on the forum but they add up). i also apply the same sort of race discipline to things like the process that is always EXACTLY the same for how I launch when on my own from my launch table. Same process, same order, same checklist, and before each step, as I am about to do that step, I confirm the previous was done and is correct. I am a very undisciplined person in normal life Lol. But certain areas, Im not. The discipline from racing was learnt the hard way and I found that strong discipline in some things meant I went better and didnt get hurt. We used to have a great big board in our workshop that had every nut that had to be tightened, the foot pounds, and a check box, and the lock wire locations, we would use before the bike ever went on the trailer. Which funnily enough included gearbox oil........ after one incident.

Which was VERY lucky escape for me.

Another race discipline I learnt that I apply to my modelling, I learnt from some time Testing with the Yamaha Japanese Works engineers, which wes very simple. After Riding, clean evey mm of the bike end to end top to bottom and you will discover things before they get bad, and then before riding in the morning the same thing. It was a great lesson I was incredibly fortunate. I do the same with my model planes and engines.

I will try and get my Lad to take some photos of the planes flying over the weekend, and I want to take some of him flying myslef. I better get him to film the first flught for each of my new planes, cos........... Well you know....

You give me too much credit, Yabby...I fly over concrete. That part is easy.
The part that isn't is the crash into concrete!