After seeing RSV-Bob's "HO Ho ho" thread, I thought it fitting to do a small Show-and-Tell.

This layout is from a really early train magazine. I have a scan of the plan someplace, which was made from the original article titled "Rubble Creek and Thunder Mine." As my boys got a bit older, I dragged it out of mothballs and we played with it for a short set of consecutive Christmas holidays. The oldest gave up...the youngest wanted it in his room. I took it back into hiding when I caught him and a buddy playing "Demolition Trains." It was too late...one locomotive wound up with a nose job onto onto the  concrete  floor.

Since I started cleaning up the Hobby Closet, I figured I'd introduce it...I've "threatened before," and would hate to die without having shown it to somebody else.

This build started in grade school over 40 50 years ago with the basic Bachmann oval diesel loco set. A casual friend with more money and space showed me his magazine collection, and I saw the Rubble Creek and Thunder Mine article within one of the magazines. My late step-dad always wanted to play with trains, so I showed him the magazine and stash. We organized a build period while my mother was on a trip, so she came home to a table with the mainline already nailed down.

You can count the number of old school isolated blocks and switches. This IS a lot of railroad on a 2 foot by four foot table, plus the dual cab control and switch board. Yes, this is before digital operations...and is all analog! The hobby closet is still a train wreck (yuck, yuck, yuck), so I didn't pull out any locos or cars. Since the theme is supposed to be a coal mine, I have a small coal-burner switcher, a couple of diesels and a pile of short coal cars. Time frame for the era would be late 40s through 60s.

It does look a lot better once the tunnel openings, walls, and structures are in. 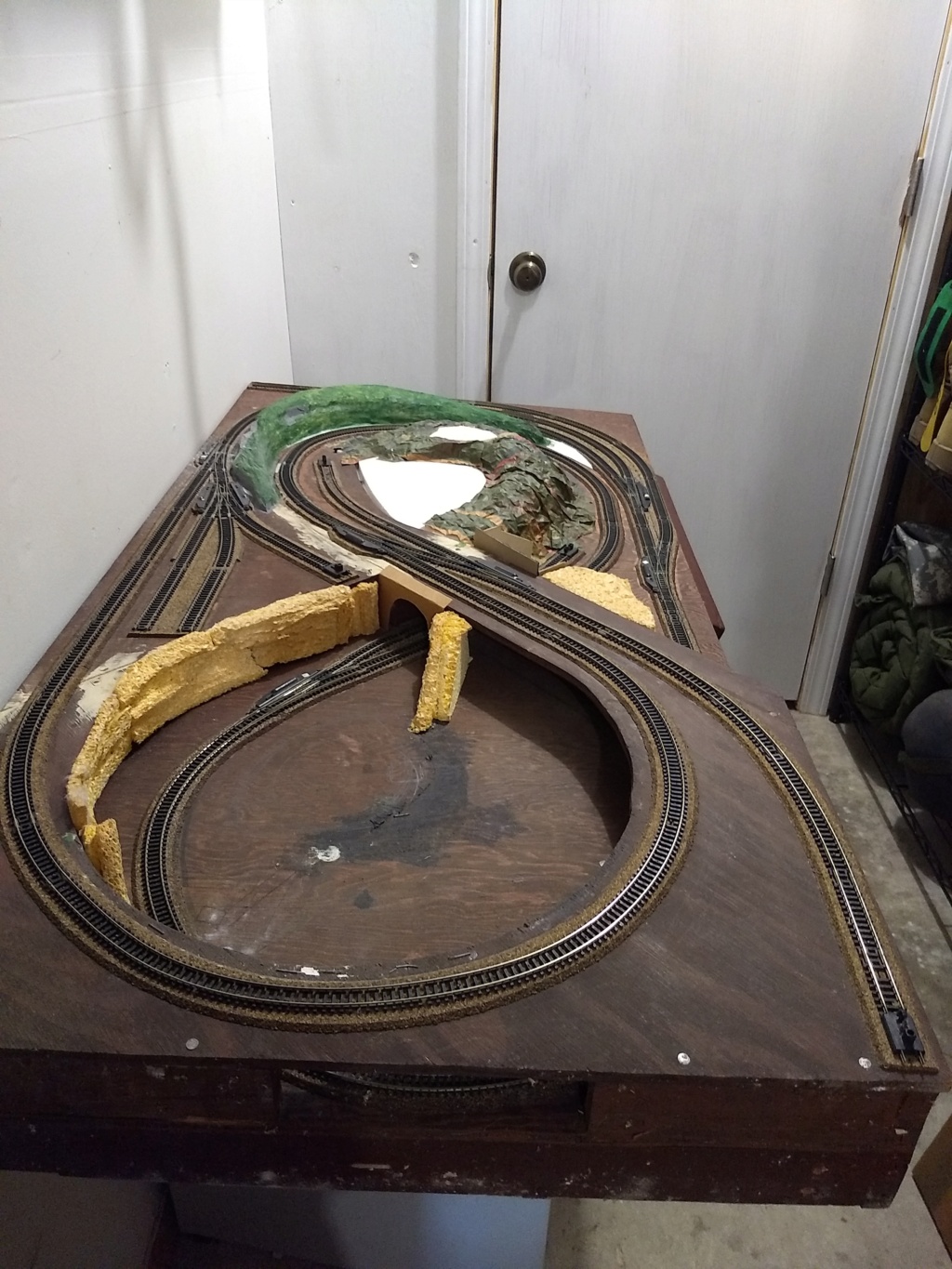 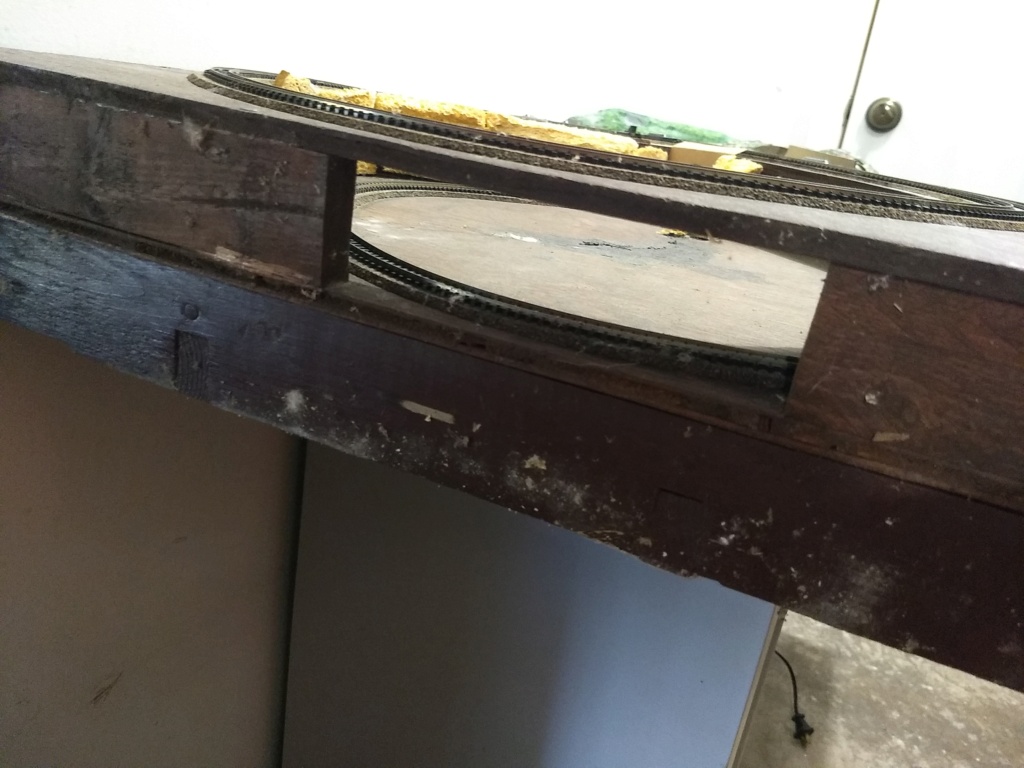 The coal mine goes on the white. A loco servicing building goes where the three way switch is. 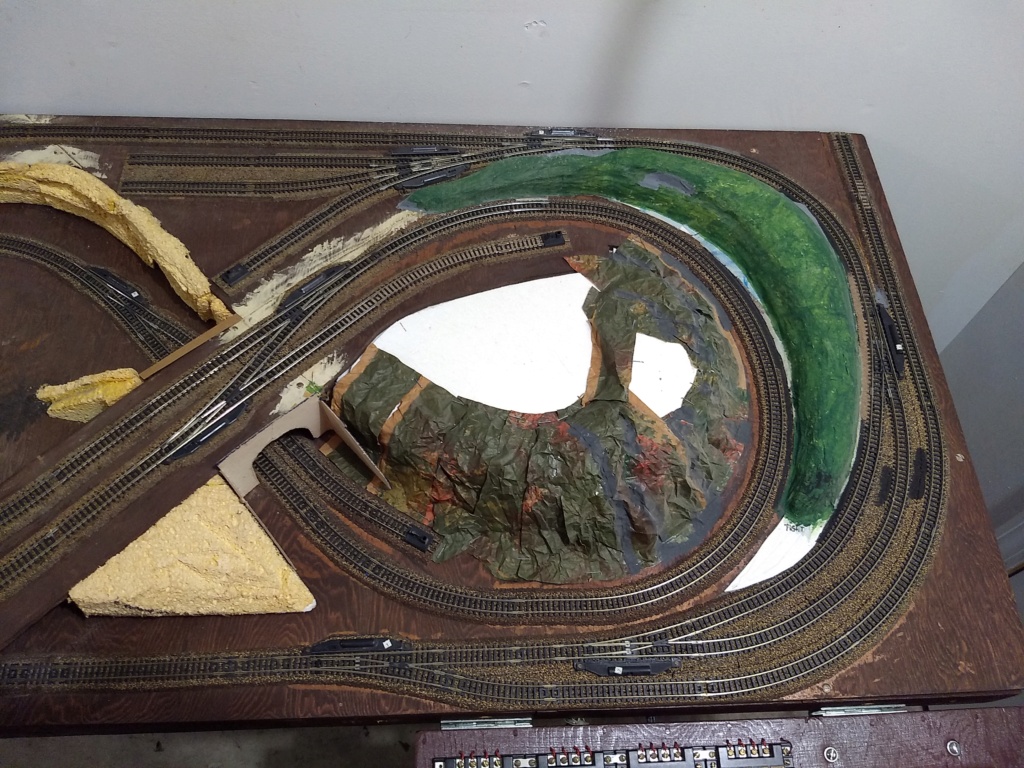 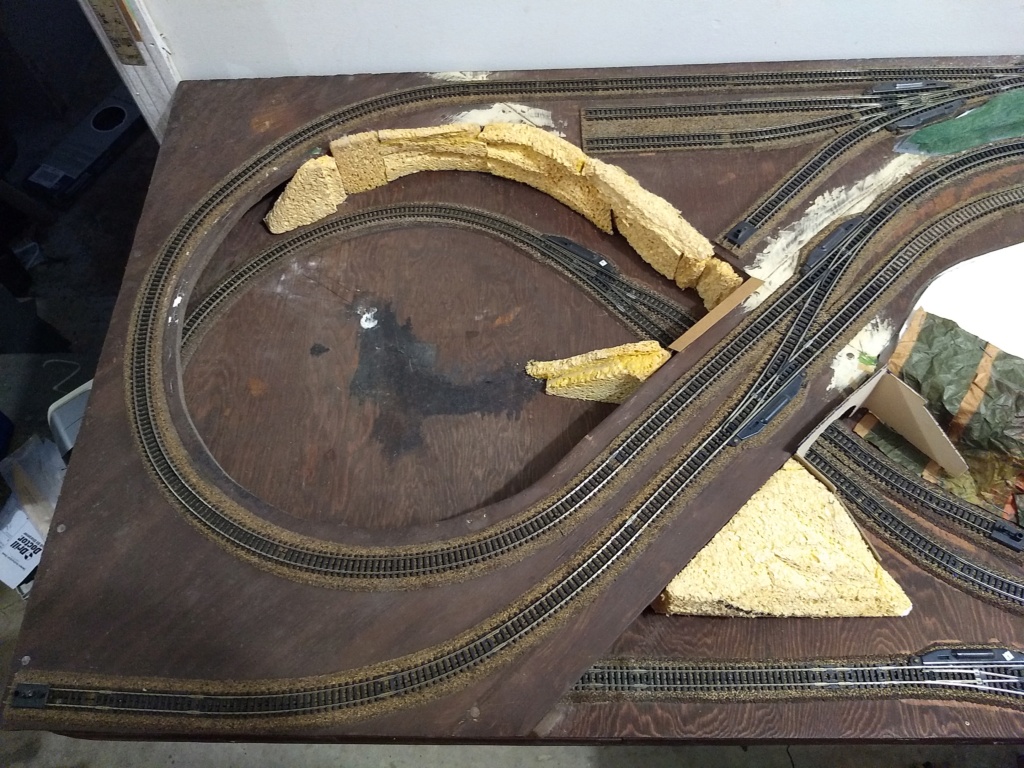 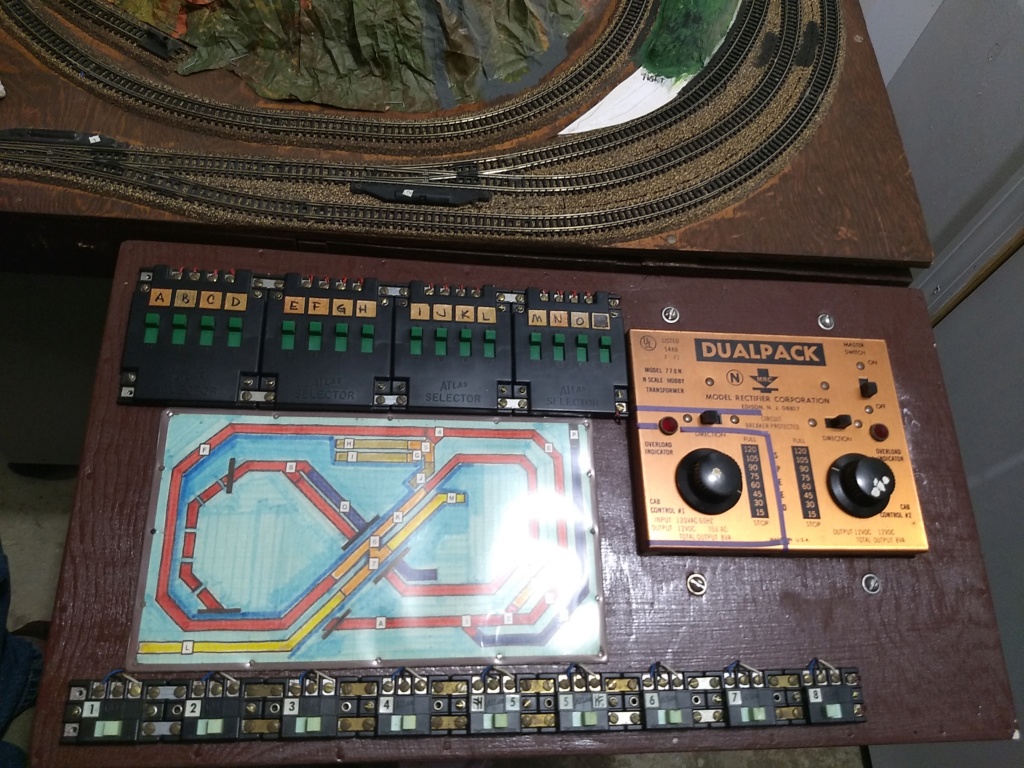 Sweet set up!! You really should give it a run this Christmas That is N Gauge correct ? Its what i think  you had said before , I was just looking through my few left YouTube vids and seen this sososo ..  https://www.youtube.com/watch?v=Irq9pQGm1Xc  I got more train stuff stuck away (more than track) LOL Its the O Gauge in 27 the same my dad and brother had cause i had seen some of it in the attic and enough track to only make a circle

Was looking at more but my room here has shrank with all the Fun stuff i don't seem to have time to play with ... Wish I were a kid again with all the time in the world and energy to Go go go

You sure tucked a lot into that small space Jim, and nicely done also.

Bob,
No reverse loop. As much as I wanted one, I was too chicken to try to figure out where to squeeze one in. I lifted the plan straight off the page using an old school over-head reflector projector. The image was shot onto a wall and the projector moved back and forth (old school zoom in/out) until I got the 2x4 image. Paper was taped to the wall, and away I traced. Then it was easy to build the underlying frame work, purchase the sheet of plywood, and trace/cut as indicated on paper.

The spurs at the front left/rear right are as in the article. I always wanted to remove the bumpers and use them for expansion.

If the train on the main line is reasonably short, and kept at slow/scale speed, then the second cab/throttle can be used to run a smaller train in the opposite direction using the spurs and sidings as a hide-away from the main train. It gets very busy very fast...even when run slowly.

I doubt I'll ever finish it, and just yesterday even considered finding a young family to gift it to...still scratching my chin on that one as I'm not one to let things go very well. I suspect it's an internal struggle from not having much as a young boy, and a driving factor behind wanting to do the Scientific P-40 again.

Your still young yet, wait until you hit your 70's, then model railroading becomes more attractive.

Yes, for a reverse loop you need an Atlas Controller, makes it simple.  I have ran three trains at one time but it's work to stay ahead of it.  Your all arms and fingers.

I have the same set-up, but I added this MRC "Sound and Power."  Diesel and steam sounds and bells and whistles.  Woo-woo... chug chug. 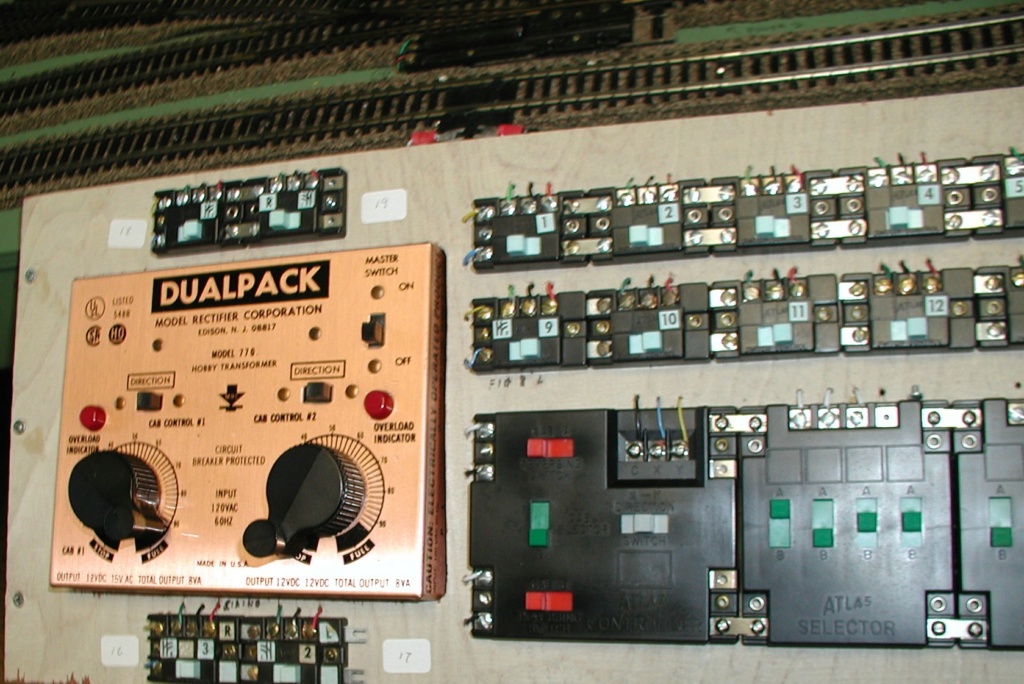 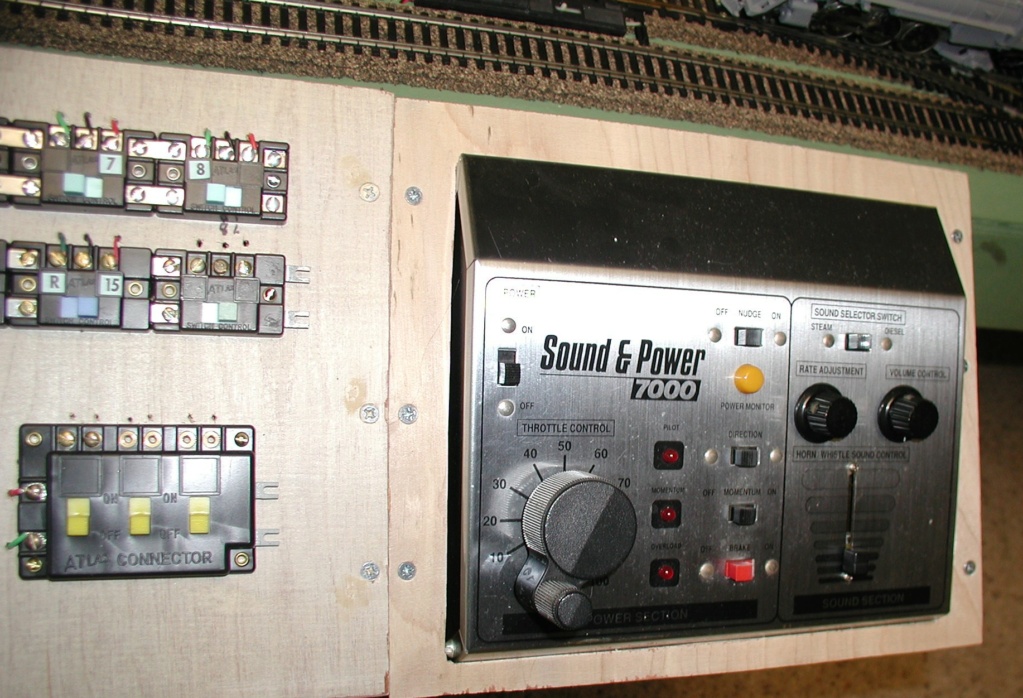