Star Alignment Requires Do It Yourself

Star Alignment Requires Do It Yourself

Rather than possibly steal thunder from another recent thread about "stars did align", thought it best to start a new one an auto repair.

In this small Eastern New Mexico town of 38k people 7 miles from Texas Panhandle, businesses have difficulty finding good, qualified help. Help can mean a younger person in training who is learning, and building up their expertise to become a regular contributing workman producing quality results.

Recently, a local reputable body shop repaired my wife's 2013 Dodge Journey's left fender/bumper area. She was involved in a minor fender bender. These newer cars, compared with the ones back in the 1960's are much more expensive to repair. Cost came out to just under $5,000.

Body shop did a decent job, but when I received the car back, found the outside air temperature sensor wasn't working. OK, car has over 100,000 miles on it and is 9 years old. Sensors go bad with time, new one was only $17 after taxes. Installed it, still got the check engine idiot light on. Plug in the diagnostic reader, still get a Code P0073 - Ambient Air Temperature Sensor Circuit High (possible open circuit). 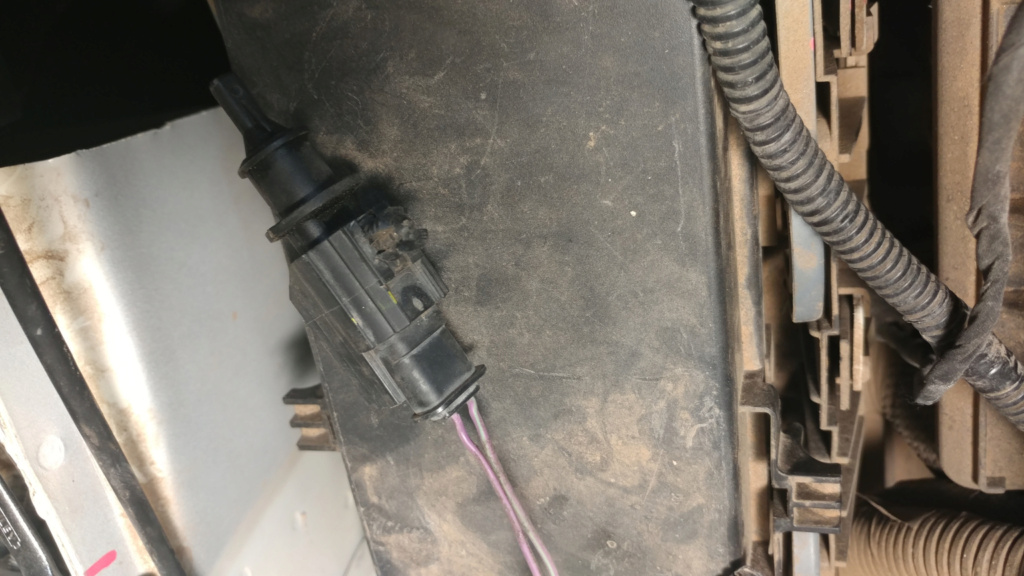 (These intelligent cars can tell you when your window washer is out of fluid, but the ultra-wealthy who own these companies want you to pay for every additional feature, even if it is no skin off their backs to have the car computer output the codes. My 1990 Dodge D150 pickup OBD1 would flash the major codes by turning the key on and off 3 times, then leaving on. Another redneck forum story for another day.

I drop the under bumper splash pan, fish the cable out. I only see 1 wire instead of two at where harness merges with the left fog light wiring. The single wire is wrapped with new tape. Inside the loose tape end where the protective loom used to enter, there is a broken wire end there. This is difficult to photo, why you can't see it. 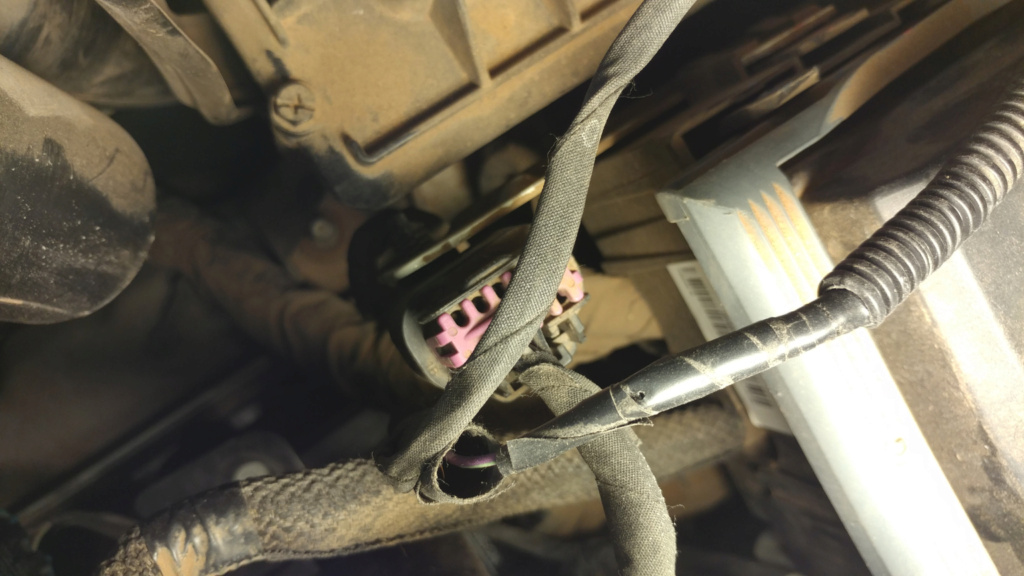 I remove the tape. Lo and behold, the wire has been spliced together by simply wrapping ends. The impact pushed the battery box in the wheel well into the tire and broke this cable passing by the top of the battery box by stretching it. 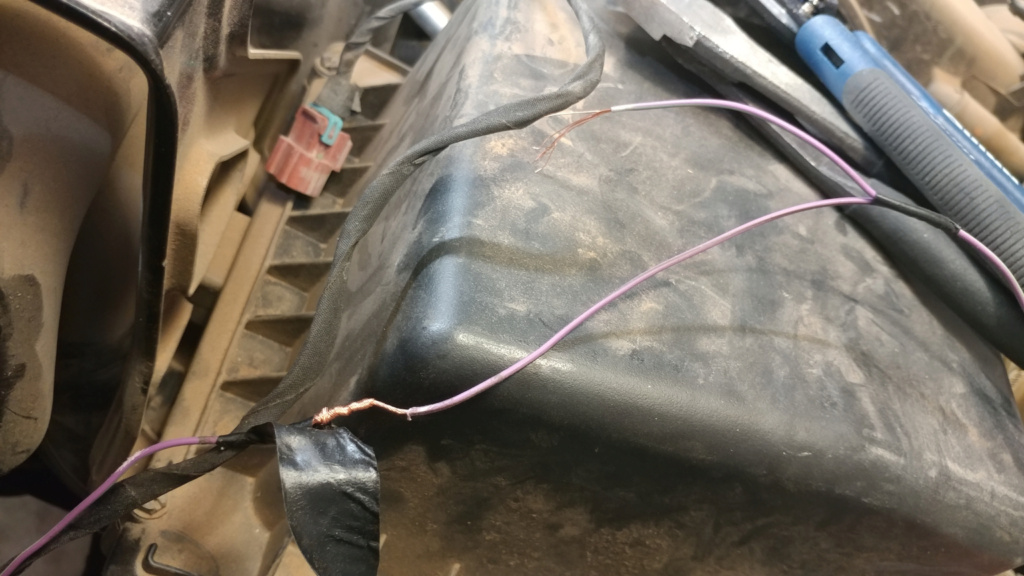 I clip back a portion so I know I now have solid wire, and splice in a foot section with crimp connectors. 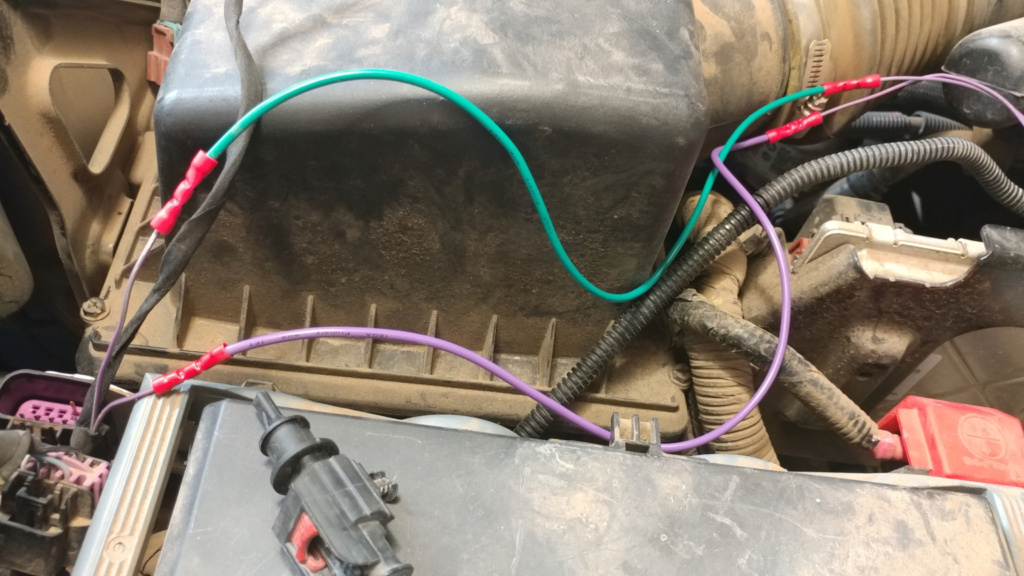 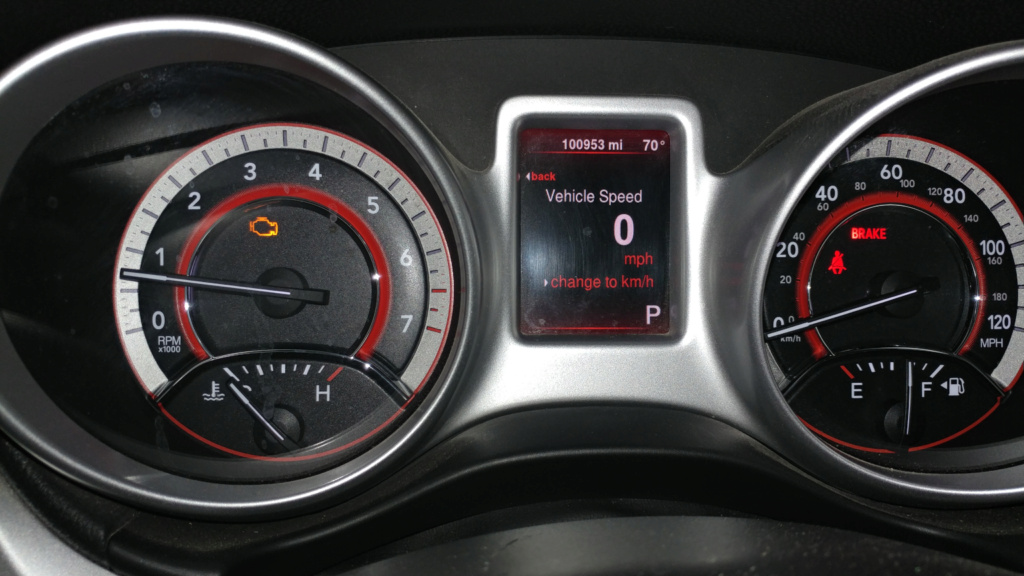 Using a section of new slightly larger wire loom to cover the one butt splice and wrapping harness with tape, the wiring is complete. 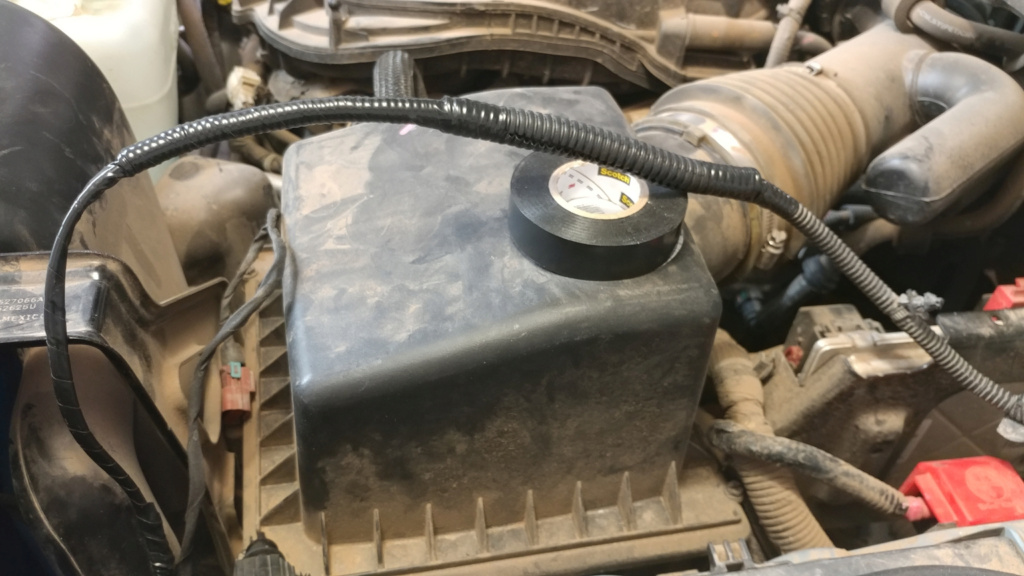 I reinstall the wiring where it ought to go. The plastic rivet end of the sensor socket is shot, won't remain in the under bumper mount hole. Replacement socket with pig tails cost $71. Phooey. I take a knife, slice it off. Then take a section of steel muffler strap, bend in a "U", run a truss head #8 drill screw a half inch away from the hole. Then run a zip tie through the muffler strap bracket. Now sensor is oriented in a factory installed manner.

Next day, I pay a visit to the body shop and meet with the manager, showed him the photos. He asks me if they can do anything for me. I told him, no. Just don't want to see anyone else have the same happen to them. (Apparently, this new body repairer wasn't a skilled auto electrician, and should have sought help.) The manager thanked me, per his request, I E-mailed the photos to his secretary, so he could have a talk with his workers.

Our small town is like Mayberry RFD, even Highway 60-84 passing through town is named that. We also have Kelly's Bar (remember the movie, Harper Valley PTA?), a pond in the town's central park called Green Acres' Lake, Norman Petty Studios and Rock & Roll Museum (where Buddy Holley's hits were recorded), and etc.

Good story George, enjoyed it. You have courage to climb over and under it with a repaired back.

Buddy Holly fan here. Some of the lyrics were pretty lame, but the tune was great.

rsv1cox wrote:Good story George, enjoyed it.  You have courage to climb over and under it with a repaired back.

Bob, glad you liked it. In reality, you sort of hit the nail on the head in your other thread regarding a train forum and members mentioning of their various ailments that affected their ability to enjoy the hobby. One needs to focus on what they truly can do in their present given situation, and accept those things that they cannot do. Once they focus on what they can truly do, then there is considerable freedom in being able to get things done.

Even though my back is still healing, I have increased mobility and can move about, but, I don't push it. I learned this through working out and weight lifting. If you injure yourself because you took on too many weights or too many repetitions, it is a set back. It takes longer to re-heal and you lose a certain amount of fitness because it could have been avoided with a little more patience and common sense.

rsv1cox wrote:Buddy Holly fan here.  Some of the lyrics were pretty lame, but the tune was great.

What I like about Buddy Holly is he was home grown, and sprouted of his own accord. It wasn't some producer with focus strictly on enriching his coffers at the cost of the artist, which unfortunately is happening now. Much of commercialized music to me really isn't worth listening to.

But similar to you, we are not crowd followers. That more or less describes the community of members we all have here. We are all individuals, in essence leaders in all that we do.