Continuing flights & videos of the Shoestring

good call, I think the venture hole in spray bar is pointed totally down stream, but might have moved and could be worth a check?
But, also as Rusty is opening up the needle, the fuel starvation issue has seemed to go away.

The handle is not scary loose, but just not at all like when it's screaming around at full speed. I still have full control. I will try to shave a half second to 4.5. I'll address that later in this post when I talk about possible propellers.

The type of venturi and spraybar I have is a sprinkler type like a Tee Dee. Three holes around the venturi circumference and the spraybar off to the side pressurizes the whole ring.

My needle is still a little inconsistent. As I mentioned in the video at the beginning of the third flight. I cranked it planning to run at the previous setting, but had to give it 3/4 more turn rich to hit it close because at the same position as the previous rich run, it re-cranked much leaner. As it turned out, I nailed my best setting of the day, but I still lucked up on it. I'm going to replace the venturi gasket before I run it again. It may be leaking. I can't think of any other reason it's inconsistent. Much better on Thursday but still a little mysterious.

Something I totally neglected to tell y'all. This was new fuel, 15% Sig, where my previous excursions had all been on 10%. The 15% might be keeping it cooler and helping prevent the runaway lean condition. I'm sticking with the 15% for now. On my first ever maiden video, my best flight was launched very wet, but it still unloaded and screamed until it coughed out. It didn't do that Thursday. Another piece of the puzzle.

Now, about props, here's my collection: 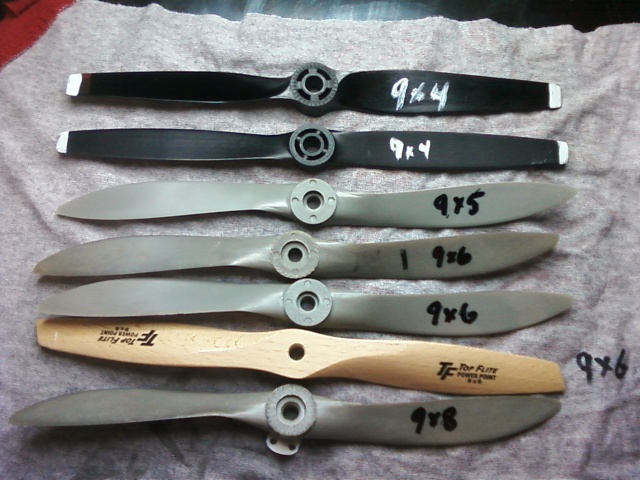 I wonder how one of those 9x6s would help my speed in the flats. The APC props tend to let the small engines spool up really fast, which would be bad on the thunder Tiger. I think the light weight Topflite 9x6 might have the same problem. But if I go buy a MA 9x6 or 9x7, do maybe one of those might get my lap times down a bit and still have the acceleration in the climbs. The 8 pitch APC might be too much, like going uphill in 5th gear. But the 6 or 7 pitch might be worth a try. I'll be visiting the LHS on Tuesday. I'll buy another 10x4 too, but not a wooden one, an MA, I think.

I promise I'll try muffler pressure next time too.

Forgive me if I'm asking too many annoying questions. I know I need to just figure it out on my own, but I like to type while I think about it.
Thanks,
Rusty
_________________
Don't Panic!
...and never Ever think about how good you are at something...
while you're doing it!

Rusty, congrats on the successful flights. I can tell you a little about your prop choices. I personally would use the 9x4's and the 9x5's only. The 9x6 is borderline and it could possibly load the engine. I certainly wouldn't hesitate to use a MA 9x6 and creep up on it clipping a 1/8" at a time off of the tips. These props are easy to clip due to them being square at the tips. APC's take a bit of work to feather the blade back into the tips. The 9x8 is over the top and more than likely won't work. It will fly the plane but as soon as you pull the nose up, that's when the trouble will begin. It's just too much load for that engine. You want to keep that engine chugging along in 3rd gear allowing it to downshift into second when needed. Anything above a 5 pitch prop isn't going to do that for you. One thing that will give you a bit more speed is line length. If your lines are 60' eyelet to eyelet they can certainly be shortened to 60' center of plane to center of handle. Don't assume that commercially purchased lines are 60' just because they state so on the package. They rarely are and from a contest stand point, line lengths are measured from center of plane to center of handle not to exceed 70'.

Experimenting with the different props is a good habit to try. The 15% nitro will ultimately give the engine more torque and therefore a 9x6 may just work for you. The higher nitro will certainly be beneficial on hotter days. You may notice that in your needle settings. As the day cools off towards the evening, you may have to back out the needle from the setting earlier in the day when the temps were up. Remember as the season gets hotter, the props choices may have to change accordingly as well. Props aren't as efficient in the hotter temps as when it's cooler. These factors are going to dictate your needle settings. Another reason to document your findings. Ken

Thanks for sticking with me, Ken, Mark, Ron and everyone else that helped me stumble through this. Some parts of this adventure make me feel like an idiot, overlooking the obvious, trying to apply 1/2A methods to another kind of machine. So, the devil's in the details now. Gotta get her trimmed right, get the wings level and experiment with props, lines, muffler and such. Figure out how much yaw is acceptable, and shim out that tank to compensate... and learn to fly; for christsake, my flying is ugly. I was impressed that she took that lick yesterday without breaking anything. Lucky.

I'll start keeping notes. I can see now that it's the only way to keep it all straight. I'll start a new thread to document my progress in those areas, and try to contribute in place of sponging off of yall. And keep the camera rolling.

I'm going to take a break tomorrow and fly some nice relaxing full bore 3 second circle burning hair raising weed splattering pullouts with my Streaks. Ahhh, familiarity. Maybe unbox the Yak-9, and put some pieces back on the old T-28. Yeah, it's going to be a good weekend. Next Tuesday and Thursday maybe me and the SS and the notepad and camera will head back out to the Fort for some more learning.

Glad to help Rusty, wish I could be of more help at times. I sure could feel the disappointment on this one.

Sometimes they fly off the board and sometimes they don't. If you recall my LJB was a PITA for a good long while.

Keeping a log is a great idea and something I may adopt myself. I tend to forget things between flights and it's good to have something to reference.

At this point things can only get better.

One important factor to keep in mind here. You and Ron both received these planes through other flyers. I stated this early on, when you receive such a gift, there's no way of really telling what flyable condition it's in. Has it been crashed? Are the incidence lines parallel and straight from wing tip to tip? Many models are borderline tipping the scales as far as acceptable weight. Don't sweat the weight immediately. Build the models and become familiar with starting the engine, knowing it's capability and certainly being safe. It's just that when your entering into the larger models, it becomes a new game compared to the smaller ones. I must admit, you have no one else with you helping you through the learning curve which makes the success rate plummet in a downward spiral quickly. We can all type at you with words of advice, however there's a big difference when someone physically shows you. Although this may have been a frustrating experiment, it will certainly benefit you when you build the Yak for instance in it's entirety. I've enjoyed watching the videos. Ken