» Nitromethane
by dckrsn Today at 2:51 am

Here is another airframe possibility for the COX Flight Contest. It uses a GWS foam wing and a 2 mm foam fuselage and tail, on a hollow triangle boom made from 1/16" sheet balsa. It is all lightly painted, to resist fuel and exhaust, and up on the front-a clean, good running Cox QRC! This is rudder and elevator, only, but it worked fine in this configuration, as an electric, so, more power to it! Only a couple of weeks before the contest begins! Let's see your entries. I'm still in test mode! 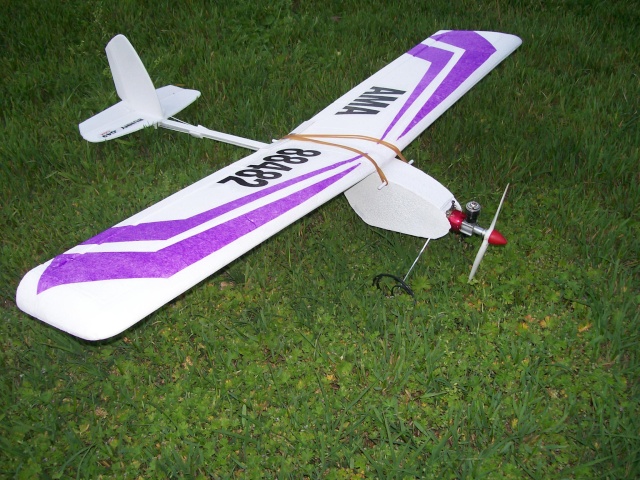 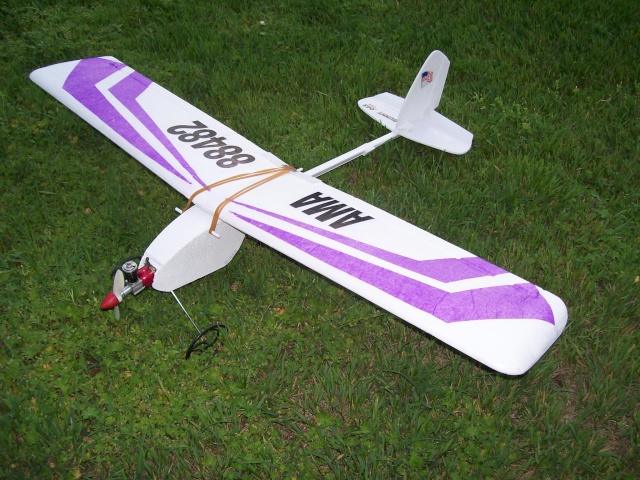 How many models are you going to come up with?

it's like a regular plane factory up there. Did you fire up the old Stearman plant?

Any of those should do fine, I think as far as settling on a power plant you may want to go the TD/medallion route due to reliability. If you choose the .051 you may want to put an .049 cylinder on it. .051 cylinders are a little hard to find.

Hopefully, I won't destroy the engine during the contest year. The C/L stuff takes off from pavement, but flies over the grass. You know. And, I really do not intend to honk the bejeebers out of the engine, so hard, max-power running won't be my goal of performance. That's why I'm trying to sort-out which combination to compete with. It has to be easy enough, and fun to operate-not a screaming handful, every time it flies!

What would the other cylinder do for it? I hadn't even thought about modding an engine. I need something that will fly in less-than-ideal conditions, so I can fly, and win!

The QRC, with the integral fuel tank, is kind of not the way I want to go, due to the capacity of fuel, and run-time it provides. It seems to have the power required, on the ground, but I haven't flown it yet, and the Stik plane boogied, with the .051 on it.

A Surestart .049 cylinder on a TD will perform about the same as the .051. The TD cylinders are a little hard to find new. Surestart cylinders can be bought new for around $12-15.

Oh geez, I don't know what I have. What would go wrong with the cylinder? What about the piston? You're making this hard!

P.S. I am going to balance the Shoestring...It was WAY nose heavy! Thanks!

They are just suggesting yo use an .049 top end to preserve your .051 from excessive wear. To get another .051 top end you pretty much have to buy a whole new engine.

Sorry man, didn't mean to make it difficult. Like Matt said, I was just saying if you fly the .051 for a whole year it may wear out. Then again, it may not. I was just suggesting to use something less valuable.

If it eases your mind any I am probably going to use your TD. 049 for the event and it has a bonifide #4 cylinder on it. Yeah man, I'm a genuine rebel!!!

I probably should mention that although I am flying, as the host I am making myself not eligible for prizes. I just want to fly!!!!

I'll be flying a bonafide original Tee Dee .051. I think I'll give it a good checkup before I start putting it to work full time. Might even reset the ball socket. Since I started using a bigger hammer I've done a couple without ruining them. I'll try not to close my eyes before I clobber it.

Ah, good! So, besides War Dog, The Reedy, we now have a few TDs lined-up for battle!

And Ron, you WERE able to make heads or tails from the bones I gave you? There's nothing like shooting yourself in the foot, is there? My foot, of course! I hope you have them running well! I didn't see alot of promise in them when they became yours, but I hoped you could CO(a)X them to life!

Now I'm working on another plane...Using BRM airfoil and slightly longer tail moment, and a portion of a large Vitamin D3 bottle, I'm gonna have a....DRUM ROLL... STUNT GEE BEE, for the .051 Tee Dee. Should be together by this weekend, and of couse, the scallops will be - PURPLE! It's a recognizable airframe shape, so, fiddeling the colors to fit my other planes, I think I get a pass on this "scale job". Otherwise, it would have been red.

Oh, and I have this little gizzonkle piece- aluminum, finned glow head that accepts a standard glow PLUG, but the threads to attach it to anything, are on the I.D. of the piece. A picture I took is fuzzy, because the camera can't see that close, so I didn't post it. I will, if some one wants it and know what it is used on. To be continued...