After several false-starts, messed up launches, and one crunched wingtip this past month, I finally got my Winder Combat Plane in the air this evening.  I figure most of the combat ninjas here would probably yawn, but I thought I had a tiger by the tail as the McCoy hauled the combat wing around the circle!  According to this Control Line Speed Calculator I got from somewhere, my 3 second circle on  60-foot lines works out to about 85 mph...I believe it!

I'm REALLY glad I traded out the EZ-Just handle for my stunt handle...even so, I had to close up the line spacing after the first flight had me roller-coastering all around the place.  Once I had it a bit tamer, I got in some loops and eights without smacking the ground and was pretty happy with myself.

Three flights on the thing, and I was ready to shut down for the evening.  At least the mean little sucker is still in one piece.

Guess now I'll have to break out the orange and black paints, and finally finish the Winder's repaired wingtip! 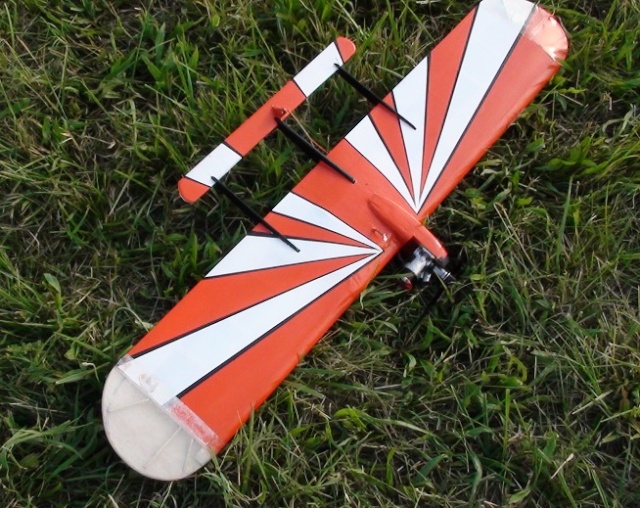 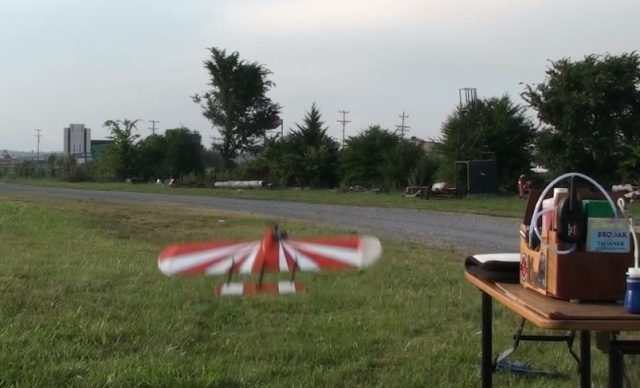 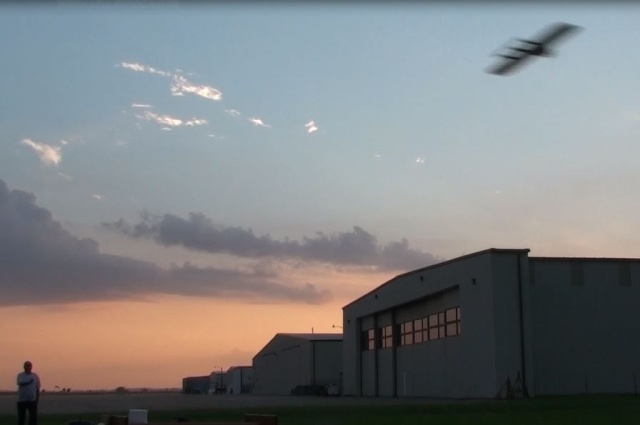 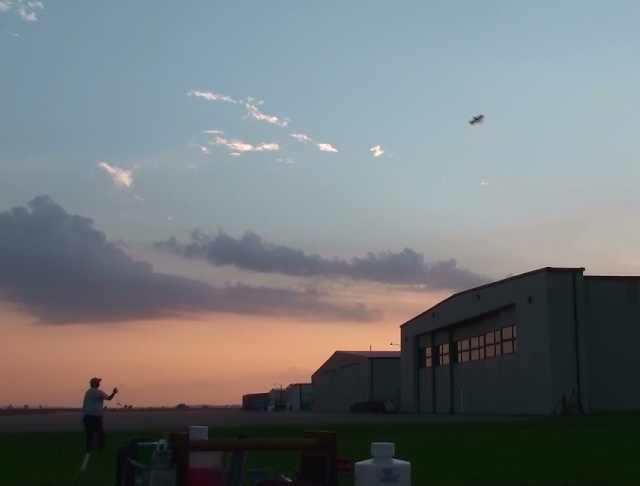 Cool Kim, just too Cool. I didn't even know you had one of those.

Those Combat wings are stupid fast!

Kim, that looks great. I wish you were near here as the New Jersey crowd is having a fun fly combat day in September. Seeing that the kit is a laser cut version, I'm quite sure it does it considerable justice. It does look mean. Ken

This has been one of my "Wall Hangers" since I finished it a few years ago.  I'd always wanted one since seeing Terry Prather's article in Flying Models way back in 1968. I was at a loss as to how to get it in the air though, not wanting to ask my friends to risk having that McCoy come after them.  It was damaged in a bad launch from my stooge with a make-shift single wheel landing gear, and got put aside for a while.

Then, Rusty inspired me with his kitchen-mat stooge....(there's a LOT of inspiration here from the members of Jacob's little forum!).  I repaired the Winder enough to fly, figuring to finish the fancy paint if it survived, and adjusted my own stooge to fit it's wing.  Even with my stunt handle adjusted in quite a bit, it's still touchy as a snake, but maybe with a few more flights, my reflexes will pick up a bit. I'm used to a model in this engine size giving me a bunch more time and sky to fly in, but it's almost the same (for me) as flying a wild little 1/2A on 30' lines.

Also need to mess with the McCoy a bit...it HATES outside stuff ! 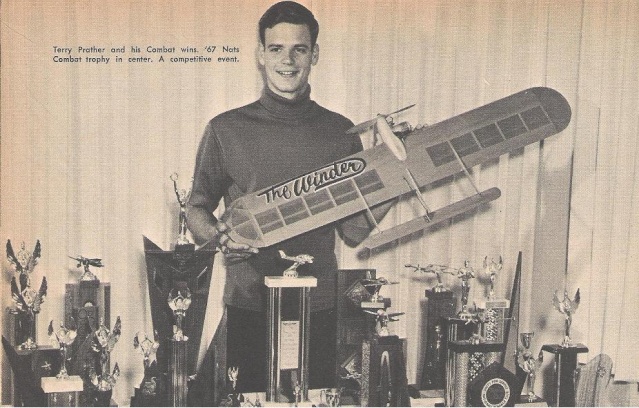 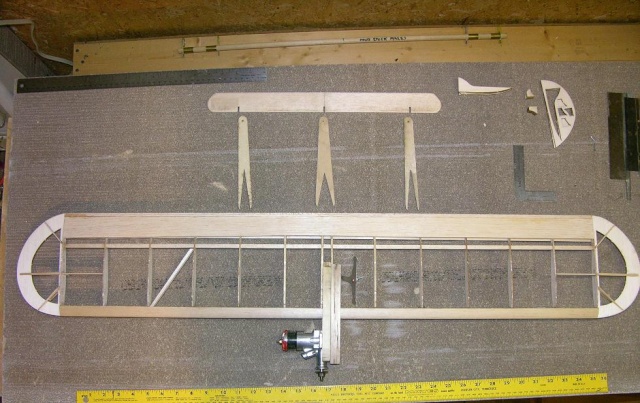 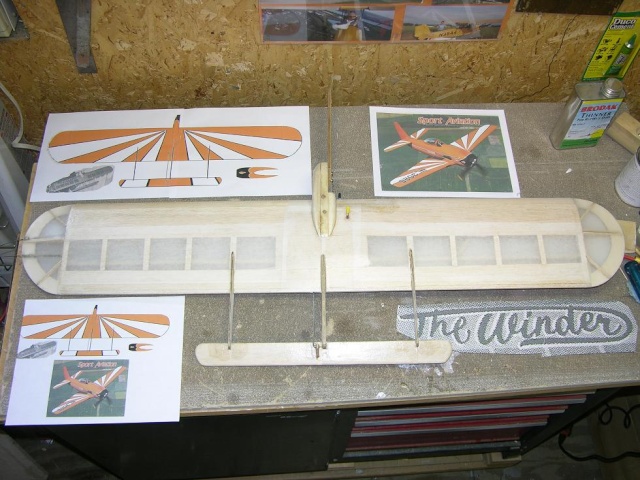 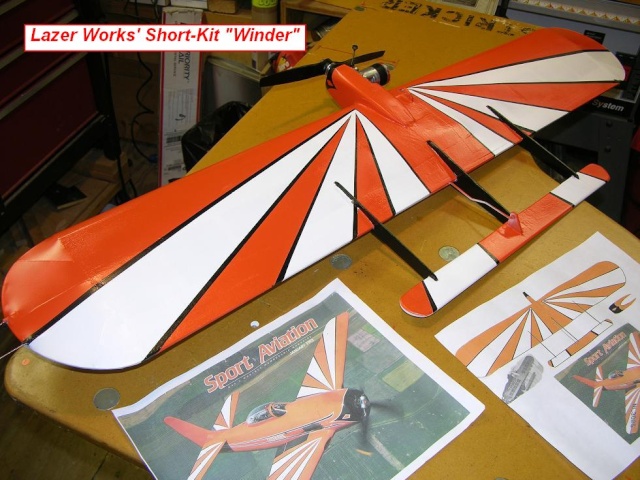 Ken Cook wrote:           Kim, that looks great. I wish you were near here as the New Jersey crowd is having a fun fly combat day in September. Seeing that the kit is a laser cut version, I'm quite sure it does it considerable justice. It does look mean. Ken

Thanks! It's a handful for me right now. I've got to get out and see a real combat match some time. I doubt I'll ever share my circle with this crazy thing though...I needed all the sky I could get !!!

Your handle spacing as your aware of is quite important. I have mine down to 3" handle spacing on models like the Winder. I'm flying a Midwest Matador that was just over the top out of control using the Hot Rock. A tall control horn can also tame a bucking bronco as well. It took 10 laps on mine to recover and fly level in which the slightest glitch would send it into oscillations. Your crash damage repair looks like it will be undetectable once painted. Ken

Ken Cook wrote:           Your handle spacing as your aware of is quite important. I have mine down to 3" handle spacing on models like the Winder. I'm flying a Midwest  Matador that was just over the top out of control using the Hot Rock. A tall control horn can also tame a bucking bronco as well.  It took 10 laps on mine to recover and  fly level in which  the slightest glitch would send it into oscillations. Your crash damage repair looks like it will be undetectable once painted. Ken

Yeah, when you step out with a different animal, the basics get re-introduced with a vengeance !!!! Back in the 70's, I built and flew a "Super Swoop"...another Sterling Classic...on my EZ-Just handle and never thought twice about the line spacing. It even survived, eventually being retired due to fuel soaking around the engine mounts. It's carcass is still around here somewhere...gonna make a slow-flyer .15-.20 for Patrick at some point.

Anyway, this has been a real "Control Test" for the wiring between my brain and my wrist! Thinking maybe 70' lines might be a good idea !

Great pics, Kim. Looks like you have quite a tiger by the tail. Sounds like it was really honkin' even on 60' lines.

andrew wrote:Great pics, Kim.  Looks like you have quite a tiger by the tail.  Sounds like it was really honkin' even on 60' lines.

Thanks Andrew! But it's all relative: Either it was very fast, or my 59-year-old reactions are a bit slow !!!! Can't EVEN imagine steering something like this with one of those mach-turning Super Tiger whatevers up front !

Some video from yesterday evening:

Is that the engine you got from me?

Doesn't like those quick turns though are you running pressure or just standard vent?

Nope...this is one I got several years ago from my friend Kirt who runs his airplanes and rockets site at:

I may swap them out to see if one likes the plane better...gonna see...

Doesn't like those quick turns though are you running pressure or just standard vent?

Thanks Ron ! I'm just running a regular wedge tank, so that may be some of the problem. I want to get the thing out to myself and mess with it to see if I can get a little more consistent run.

Terry Prather wrote a follow-up article on installing a bladder box on a Winder he built, but think I'm gonna mess with this deal a little more.

Pressure may be the way to go with the way those things turn. Although I saw a guy using an RC clunk tank yesterday that worked pretty good. I'll have some video up soon in my NM thread.

Cribbs74 wrote:Pressure may be the way to go with the way those things turn. Although I saw a guy using an RC clunk tank yesterday that worked pretty good. I'll have some video up soon in my NM thread.

Hey Kim the Video of the Clunk tanked combat is in the Control Line Clowning thread.

I'll check it out here in about a couple hours on the airport's WIFI.  Think I may start my "Hornet" kit and use this type of tank in it...just need to wedge it in with these other projects. The "Hornet" (old Midwest Kit) has an open-topped frame with the tank strapped on behind it's upright engine.

Also, looks like I was at least 10 mph over my calculated speed for Winder...gonna try again to estimate it.

Kim, from the video it's somewhat difficult to diagnose problems. I've been through this quite a lot and I can only offer some suggestions that assisted my problems . I would say without a doubt that the tank off to the side is suspect. The other is some engines just do indeed draw better. The Midwest Hornet example would more than likely help and I've had several similar models that worked quite well. The Netzeband Half Fast for example has the tank directly behind the engine.

I would route the fuel line to make the length as short as possible. Wings are always a problem due to the speeds and the G-load being placed on the fuel. I've had to unsolder the pickup and pull it slightly forward out of the rear corner of the tank. Where to put it takes experimentation. I had one plane in which I had to slide it forward a 3/4". I would try this as a last resort.

Install angled fuel tubing extensions into the wind on the filler and vent pipes. I would first try it using both filler and vent and if no change, I would cap one and use the angle on the other.

The engine would probably work if launched richer, but this somewhat defeats the purpose as the speed will dramatically fall off. You could also make aluminum pads to install under the engine which would shim the engine outboard. I tyically use 1/8". This obviously isn't much but it's an 1/8 less that the fuel has to make it's way to the engine. If the pads are used with nylon thrust wedges, this will also tilt the engine even further outboard.

One thing I found with a Mccoy is as much as I like the needle valve they work horribly where they enter the case and fuel draw can suffer immensely. One thing you could try is use the fiber washers from a old Perfect bellcrank and seal with automotive RTV where it meets the case. While priming with your thumb over the venturi, turning the prop back and forth listen for any air hissing. I'm sure you will hear it as it could be present at the case or through the threads in the needle at the assembly itself. All of these could be contributors to your problem. Ken

Your combat plane looks really great Kim. The "rising sun" motive is even better on a wing than on a plane with a fuse.

Kirt Blattenberger is a nice and helpful man. A few months ago, I asked him to scan a drawing from an AAM article that was listed on his website. He replied me in no time and sent me a link to the drawing he scanned. His videos are also worth watching.

Agreed! Kirt is an excellent dude ! He has a ton of great stuff on his site.

Kim, open this spreadsheet to calculate your speed. It's made for adjusting lap time, but MPH is included. Save it to your computer for future use. If the link won't work, let me know and I'll upload my copy somewhere that you can download it(after asking the owner's permission).

Beautiful plane!  This a link to a awesome speed calculator:
http://www.flycl.co.uk/control_line_speed_calculator.htm

Thanks Guys ! I'll re-do the estimate. I want to be fairly accurate, and another forum member estimated it to be in the low 70's...still plenty fast in my world.

What did you use for the leading edge?