time has a way with memories, the PT-19 didn't come out until '60, i wonder if it might of been a blue/yellow TD-4 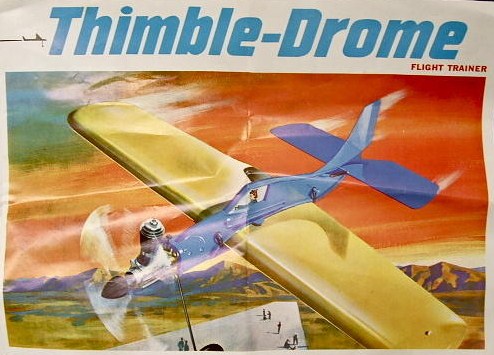 It has oft been said that "Age is a matter of mind over matter; if you don't mind it really doesn't matter."

Corrolary to that, I don't mind getting older it's may aging body that disturbs me most.  Admitting that you can no longer do what you once did so freely without complication is a tough confession to accept.

BUT there are the "golden memories" that sustain me and for them I am most grateful.

Stronger diopter reading glasses and Naproxen sodium work for me...

Glad you found stronger glass and medication work for you but my vision problem is due to a stroke in '03 and I've been advised that it is irreversable.

Glad you found stronger glass and medication work for you but my vision problem is due to a stroke in '03 and I've been advised that it is irreversable.

I'm sorry Super Dave. I don't realize from day to day; how much I take for granted.

Here's one of my old designs. I always draw plans, and would share if anyone's interested. I'm not much of a flyer, and always wondered how this model (and MANY more...) would perform in the hands of a "seasoned" pilot. 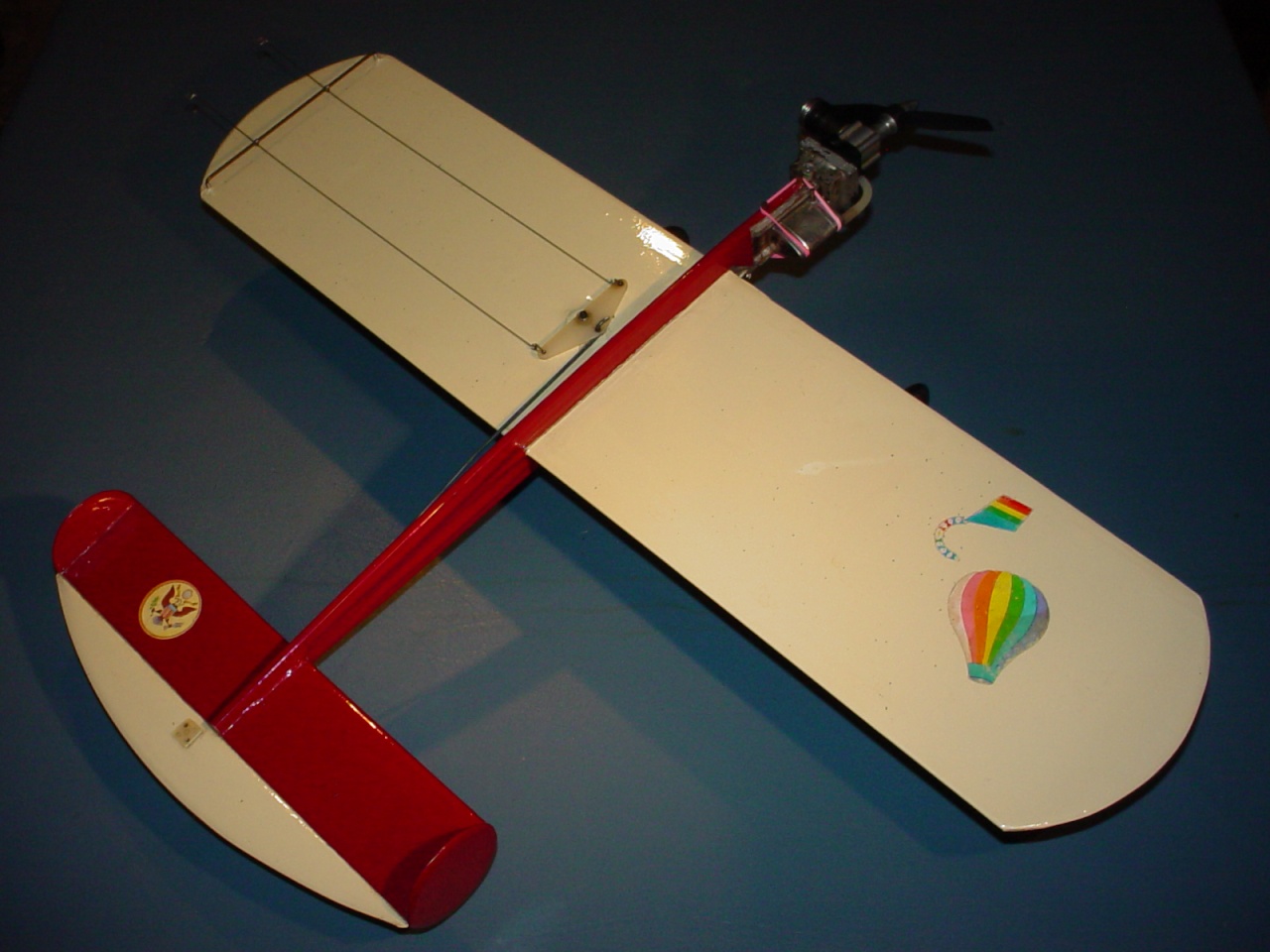 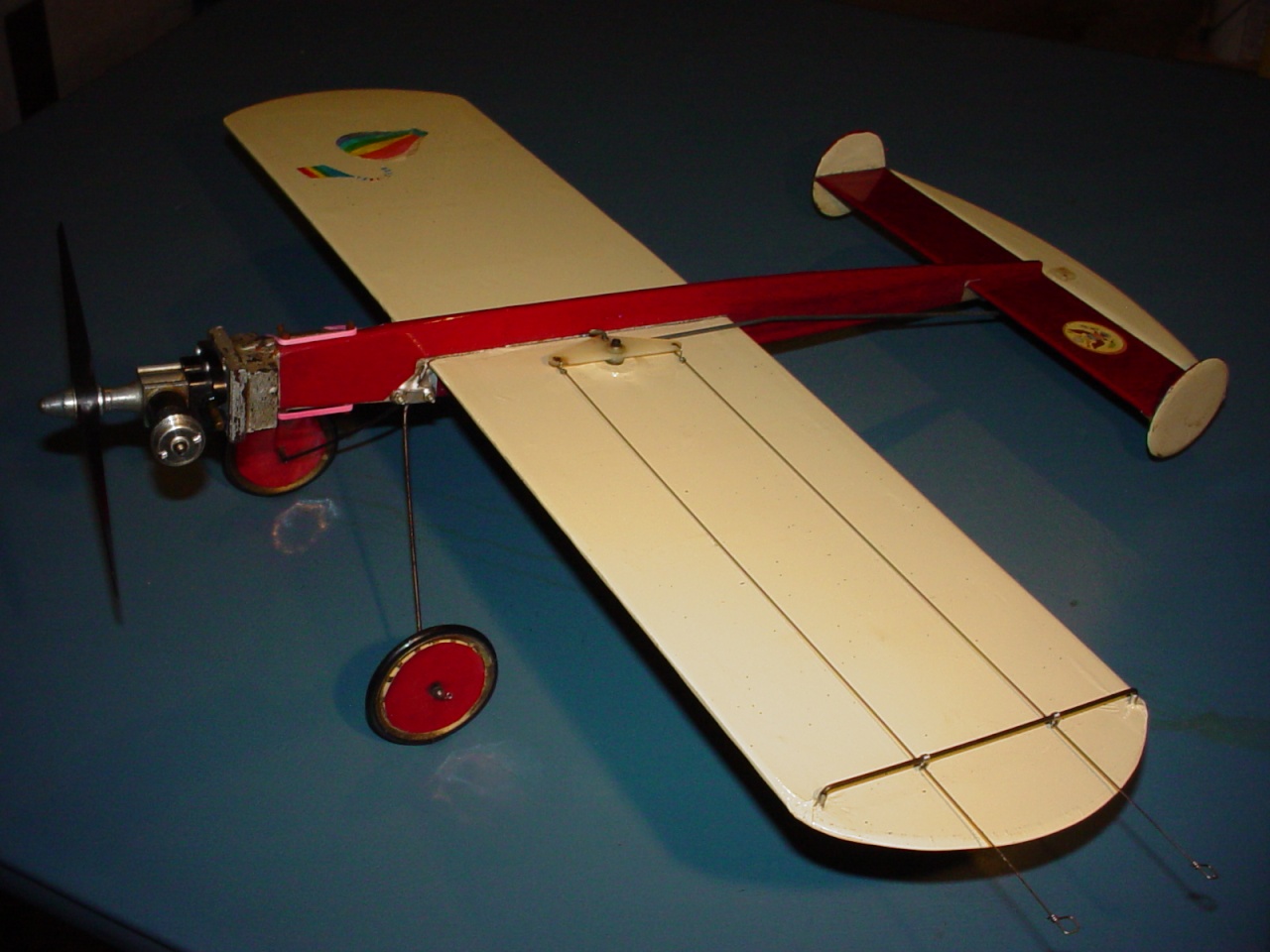 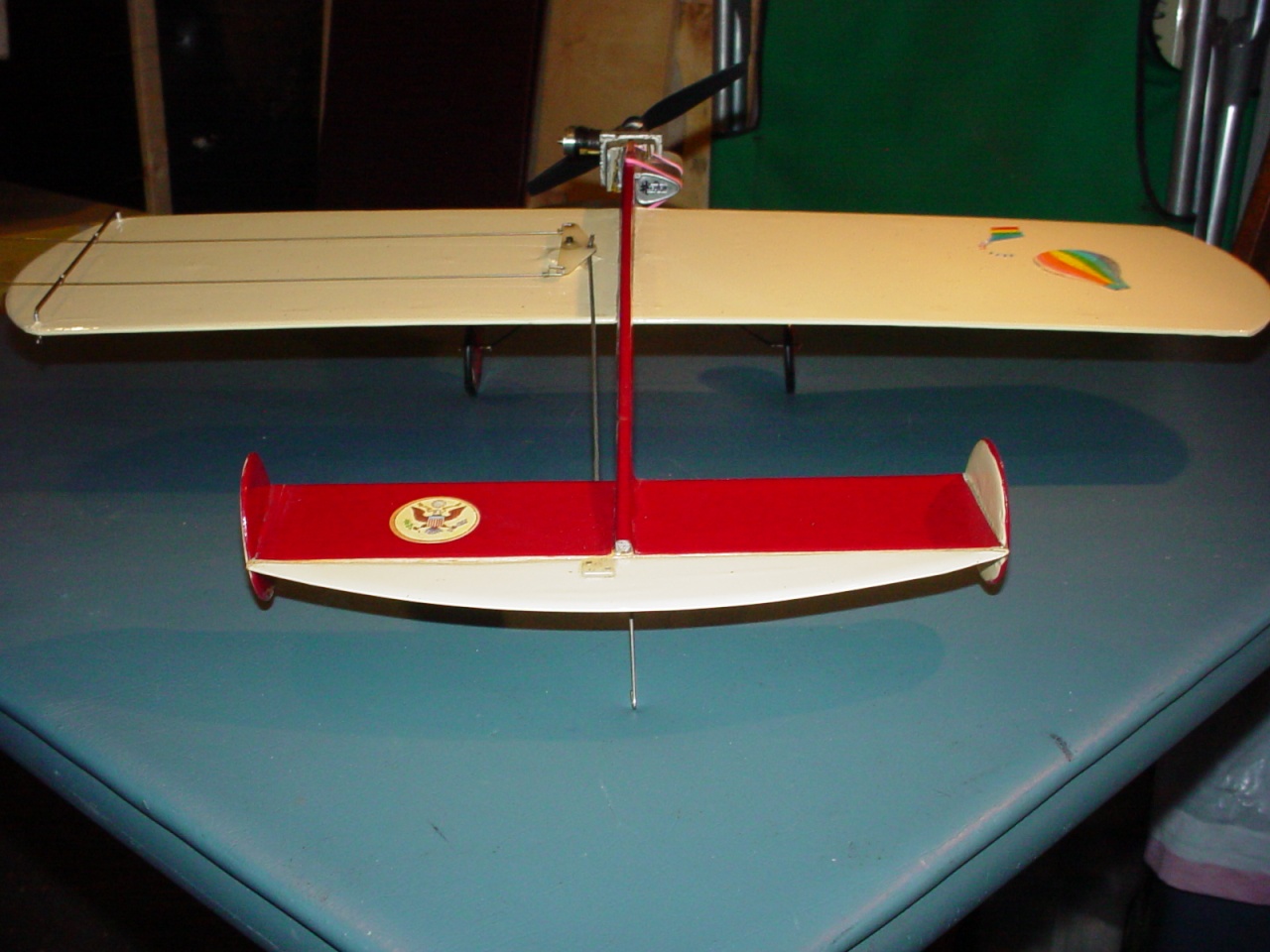 I experimented with this "unorthodox" construction method on 2 different airframes. the other is a Triplane. Both have flown. 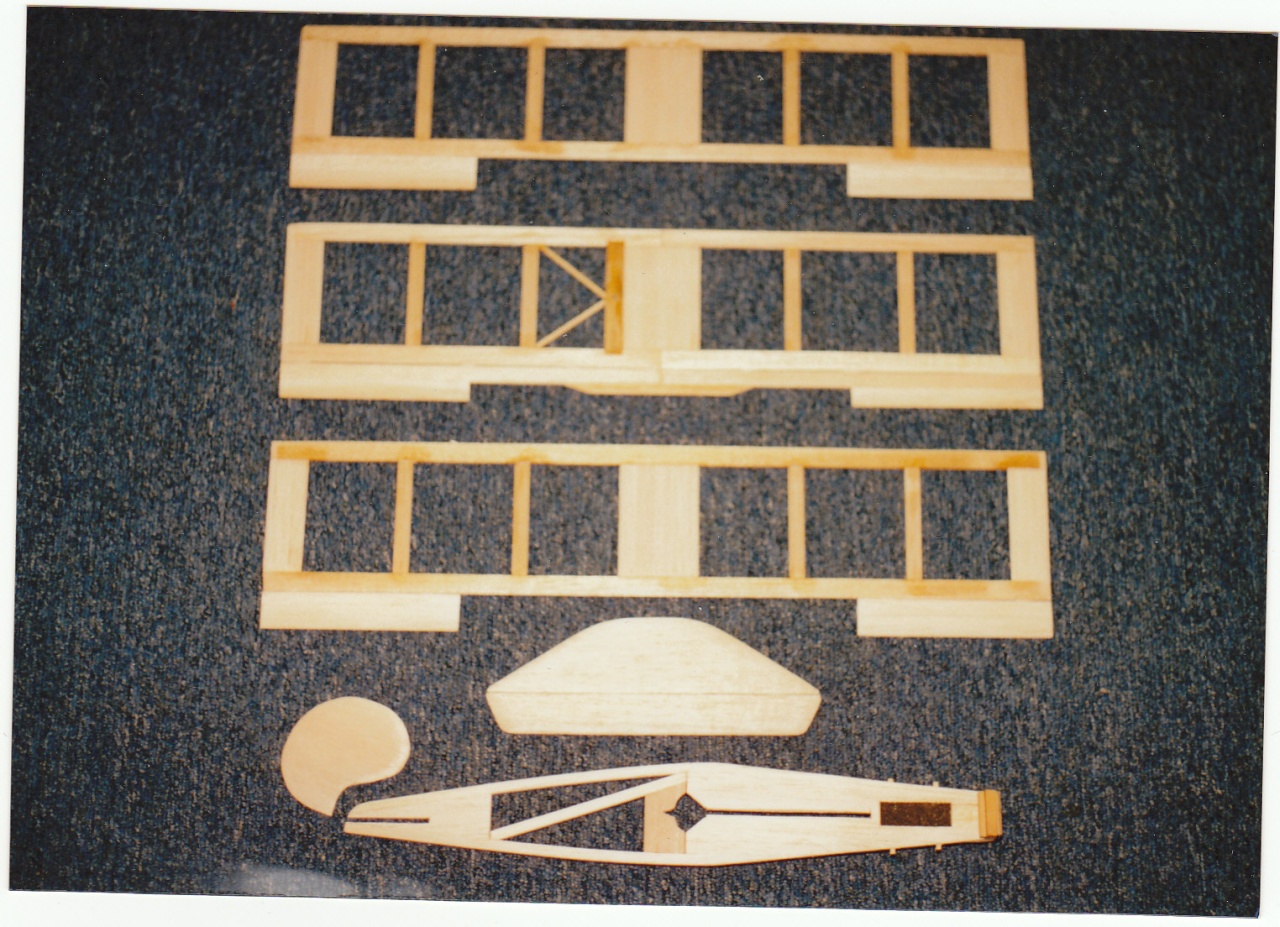 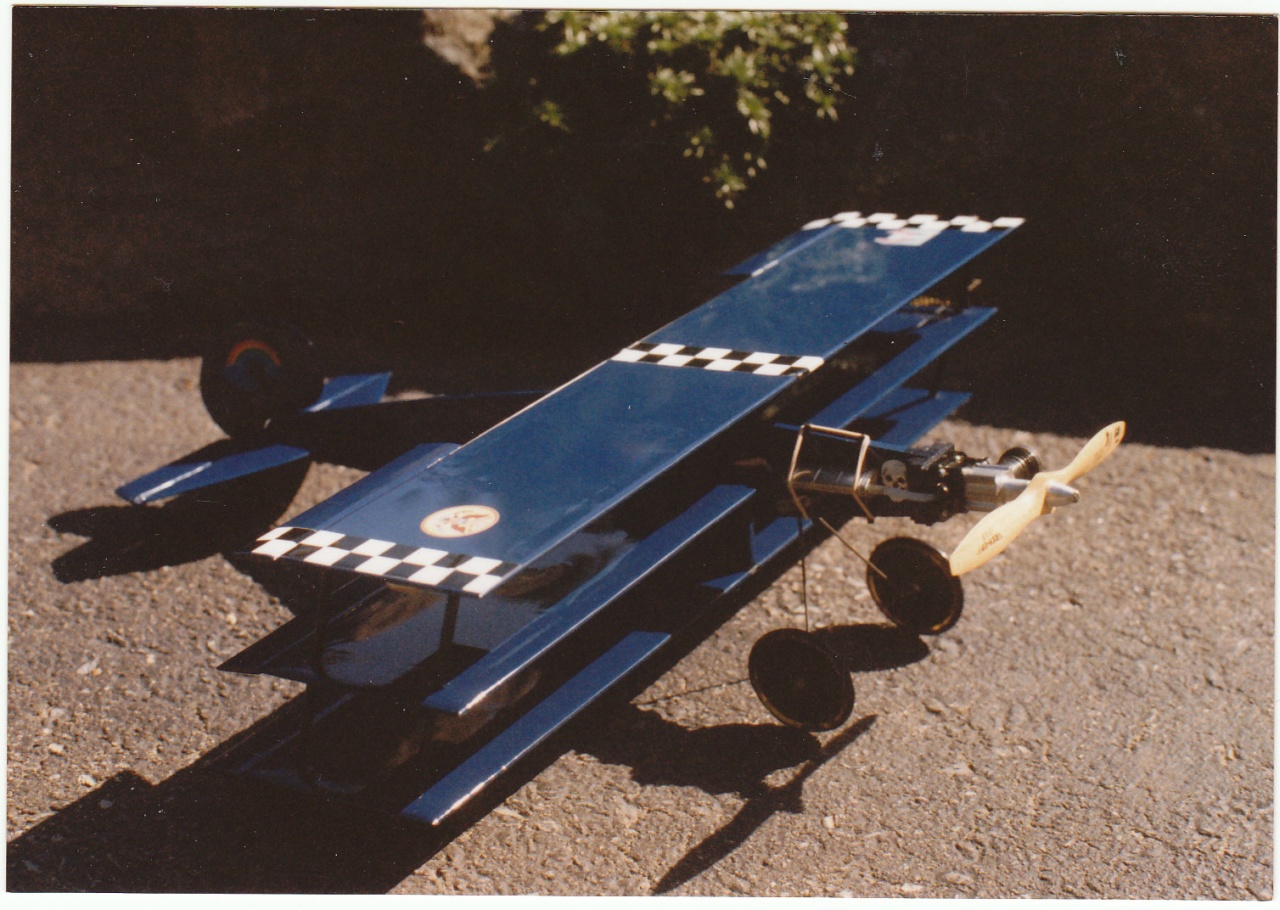 I never had the guts to even try a wing-over

RknRusty wrote:Nice work, Roddie, you've got some impressive concept to development skills. I'm a hack by any comparison.

Thanks Rusty, I've got to at least "fly" some of the planes I've designed/built... but never flown. I have several that fit this description. It's the deigning/building/tinkering that's been fun for me; spread-out over the years.

Roddie,
I really like the looks of the Stunt plane & would like some more info on the way you did the control line lead outs.

RK Flyer wrote:Roddie,
I really like the looks of the Stunt plane & would like some more info on the way you did the control line lead outs.

Thanks for the compliment! I have designed "other" adj. lead-outs... (lighter/less complicated) but here's a run-down on the way I made these...

The "key" parts needed for this approach are the tiny spring-steel "wheel-retainers" designed to fit .062" dia. music-wire "landing gear axles". (you'll have to hunt for those, if you don't have any...) The beauty of these little gems; is that they stay where you put them.

The guide "rail" at the inboard wing-tip "is" .062" music-wire. Cut a pc. the length you need, and install a whl. retainer on one end... and another on the other end ("before you make any bends") then; slide/twist them "in"... an inch or so... Once the whl. retainers are on; bend the guide-rail into a flat "U" with sharp corners; with it's "legs" just long enough to raise the rail above the wing for clearance.

How you attach the guide-rail to the wing-tip; depends on the wing's construction. My example used a flat wing panel. If you've got a built-up wing; you'll want to bend the rail to match your airfoil profile at the wing-tip. You should in this case; install small balsa blocks in the wing-tip; as thick as possible (most critical at the T/E) to accept the guide-legs. Drill a 1/16" dia. hole in the center of ea. block. Using a sm. file; cut several "shallow" notches (for gluing) into the legs on the guide, where they will enter the block... and glue them in w/thick CA or epoxy. You don't want the guide-rail to pull out of the blocks. A flat wing could utilize a streamlined balsa rail on the bottom; the length of the chord at the wing-tip. A block of say; 1/4" thick x 1/2" wide x the chords length. Drill through and glue to accept the guide-rail legs in the same way.

I used .025" dia. solid music-wire lead-outs, which must be threaded through the tiny loops in the whl. retainers before you form the loops for your lines.

Adjusting the position of the whl. retainers must be done with care. You'll probably only have to do it once... and it's safer to make a little tool to do it. Easy... cut a Popsicle stick so its about 1" long and cut a slot "in the end with the radius"... about 1/8" long with a dremel cut-off whl. (or fine-tooth hack saw blade) This forms a "fork" that engages the guide-rail. "Carefully" slide the whl. retainers to where you want them on the rail; while holding the "rail" with sm. locking pliers (not the wing!!!) I can't emphasize this enough. Those little whl. retainers grip tight! They won't slip on you while flying!

The photo(s) show how I attached my guide rail on the wing's underside... but I would use the method I described above. I made mine removable with 2 more retainers on the bottom and short pcs. of alum. tubes glued into the wing. 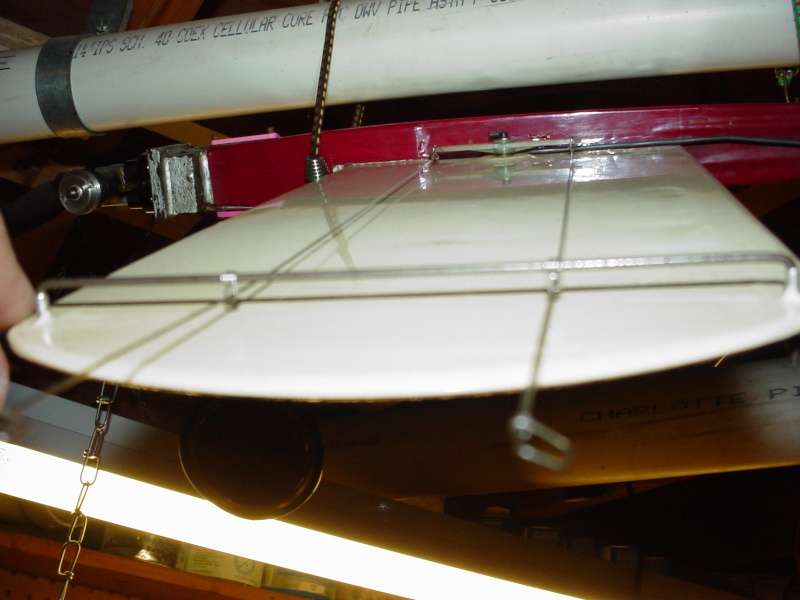 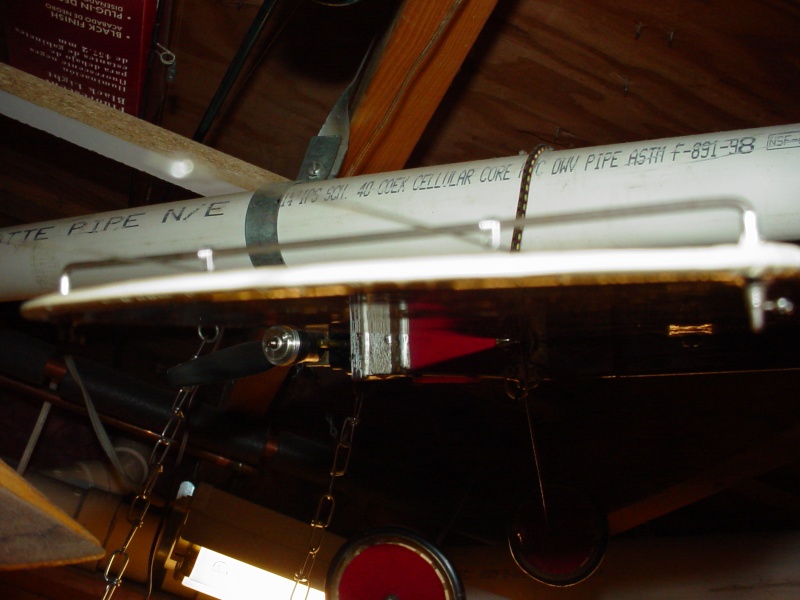 Similar topics
» New guy here with all kinds of new guy type questions
» .049 Glider FS in my Area
» Blizzard check-in
» Any 1/2a action near the Tampa area?
» Sure Start Runs Then Surges