Log in
Search
Latest topics
» Sig castor
by Marleysky Today at 10:34 am

Thanks Jim and co,s  very reasonable and next year would be great I think a few more people will bee willing to get gone with it

@JPvelo wrote:Allright,
Since I have received a total of one video we will extend to midnight Friday May 16. This should give everyone plenty if time to sort out issues and let weather clear up. It will also allow the CDs work to calm down and for him to return from vacation.
If there is enough final participation to warrant having the contest next year it will be pushed back to May for the same reasons.

Oh good! I was having difficulty getting the flights going, and the extended deadline will help get things sorted out!
But, anyone who enters now, would be 2nd place, right?

I couldn't let Jim have all the sympathy. 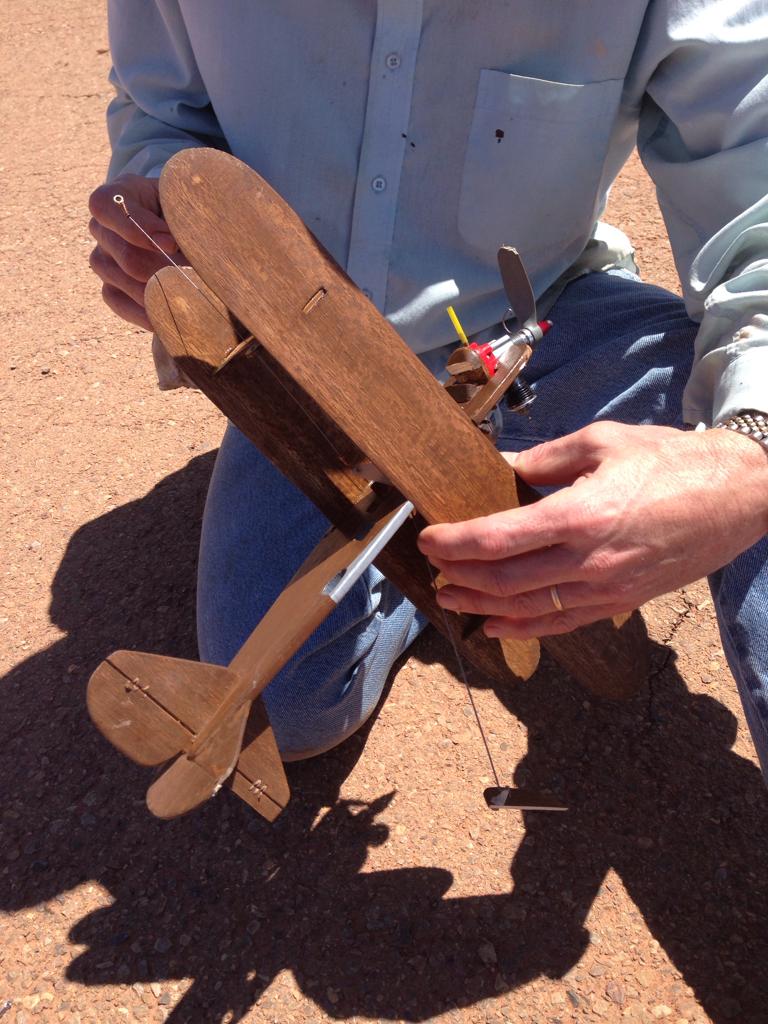 This little plane is really starting to get on my nerves. I want this thing to ROG, but man it's being a real PITA.

It's taking all my patience to not put my foot down on it.

@GUS THE I.A. wrote:Oh good! I was having difficulty getting the flights going, and the extended deadline will help get things sorted out!
But, anyone who enters now, would be 2nd place, right?

Probably not. But if I get second with the fastest time, I'm cool with that. Actually a couple of guys got their flights in before the 18th deadline. Lots more had bad weather all April. I sure did. I flew my big planes in windy weather that a small one couldn't have.
Rusty
_________________
Don't Panic!
...and never Ever think about how good you are at something...
while you're doing it!

@RknRusty wrote:Aw man. Elevator, engine mount...
Is that from a nose-over on the takeoff roll?
Rusty

Yes, even after I modified it yet again.

On the plus side I watched a guy crash his $2K slick 540 RC today. So looking back mine wasn't all that bad.

We hiked through a rattlesnake infested field and barb wire to retrieve it. Tore my jeans!

I made some changes to my lead-out guides.. and made a better NV support in the cowling. 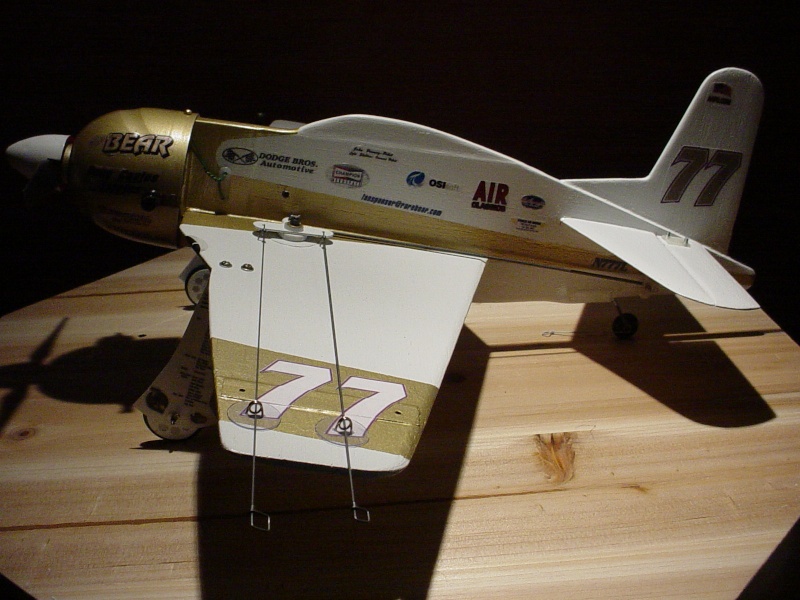 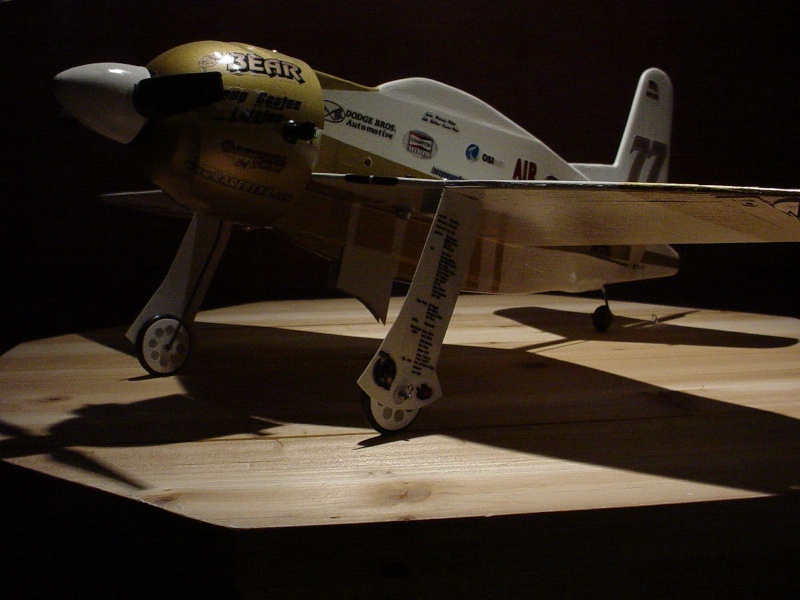 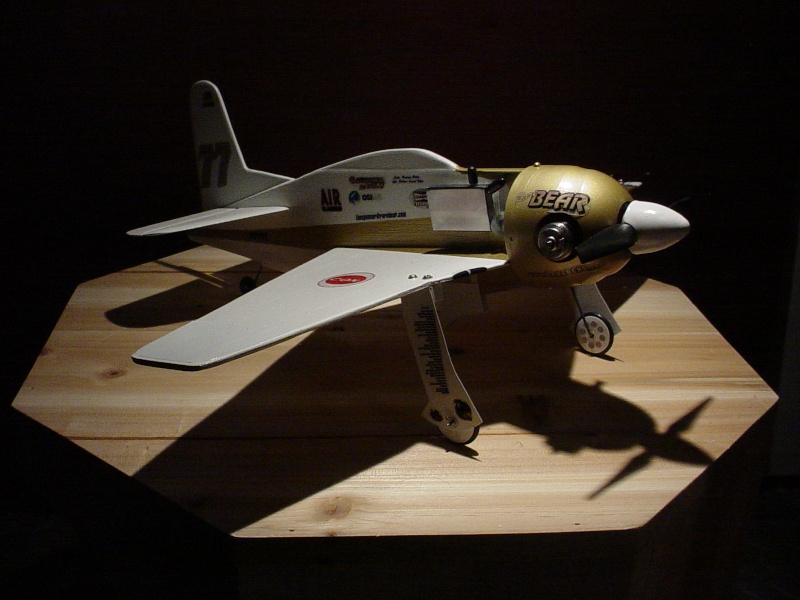 The Rare Bear looks great, where did you source your wheels?

@1/2A Nut wrote:The Rare Bear looks great, where did you source your wheels?

Thanks much! Those wheels I CAD designed and cut on a CNC router. Their durability is yet to be tested though. The wheel base-material is 3/16" Ultraboard which is a polyurethane foam-core, faced both sides with .015" sheet styrene.

The tires are O-rings which stretch-on and compress the foam, which holds them in place like a "wheel rim" would.

The symmetrical lightening-holes around the wheel; I filled with hot-melt glue to add some strength.. and fuse into the foam-core. The excess glue was trimmed flush with the wheel afterward, using a razor blade.

The hub was drilled 1/8" on the router. It is bushed down to a 1/16" i.d. using metal tubing for 1/16" music-wire axles/struts. A 1/8" endmill was used to cut the whole wheel. I made several dozen of the Ultraboard base-parts all at once on a couple small sheets of material about 10 years ago when I was working for a sign company. 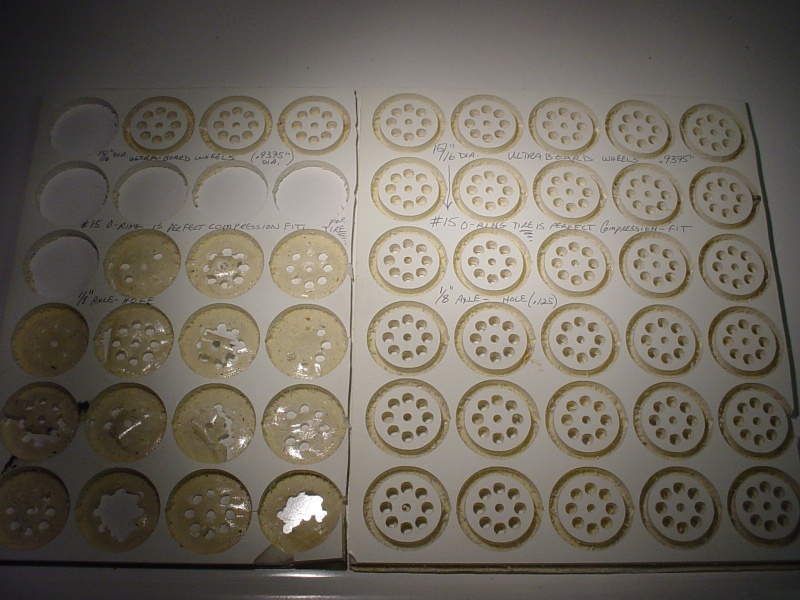 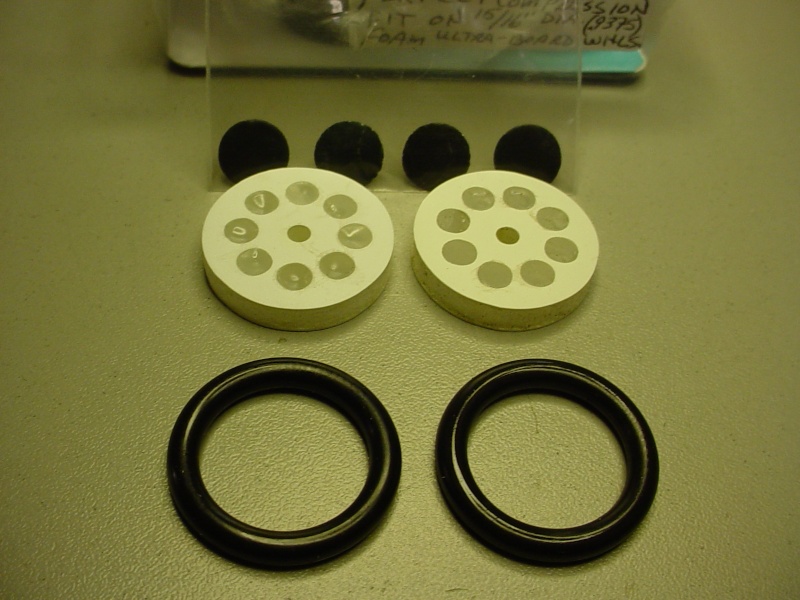 These gear-blocks are Cherry-wood, and butt up against the bottom side of a Walnut strip-spar built into the wing's leading edge. The blocks/spar were pre-drilled to accept two small wood screws from the top side. 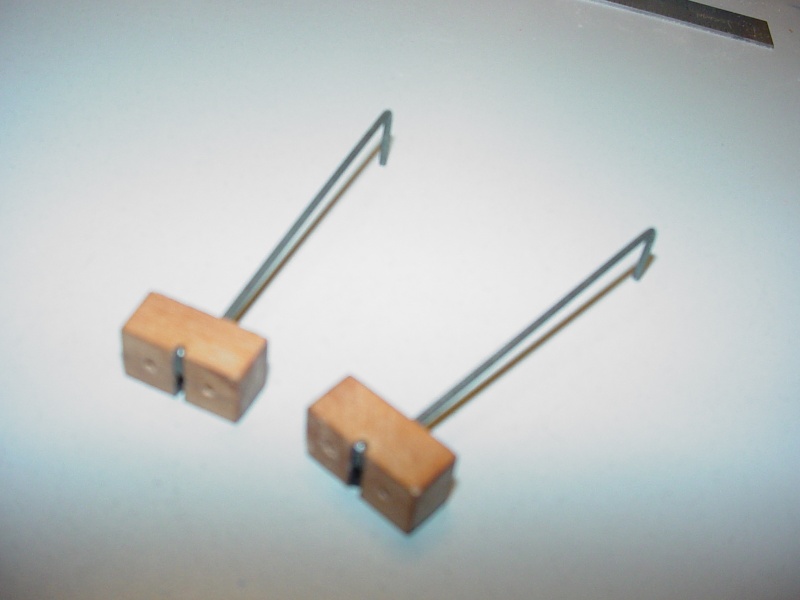 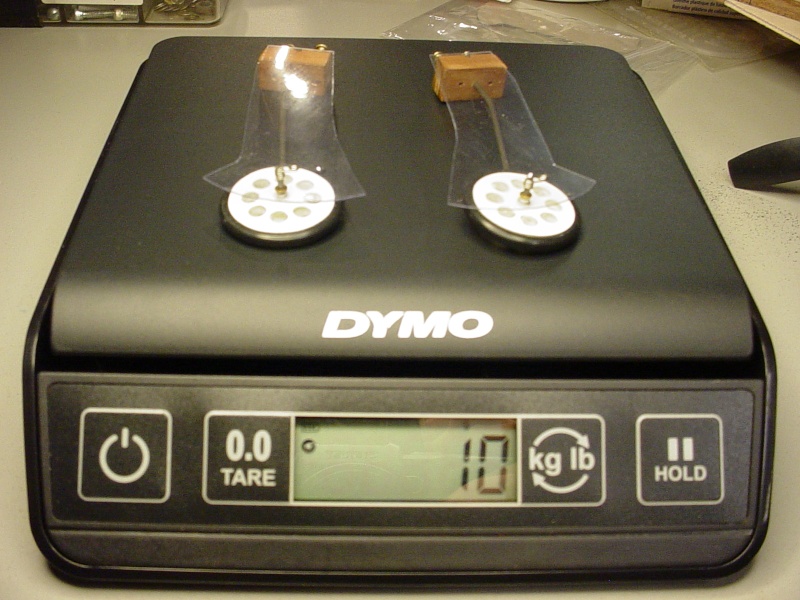 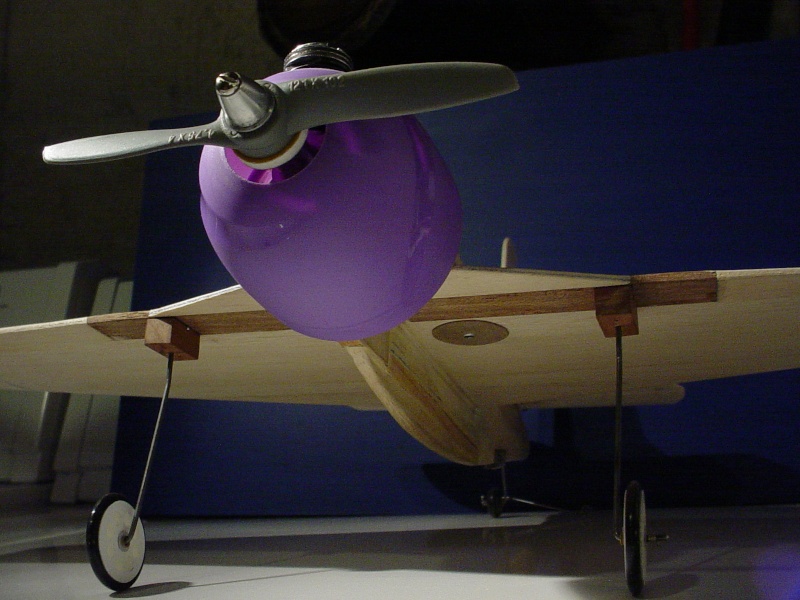 Well, now that I have official video of the plane in contest mode, I went ahead and repaired the damage from the speed runs and re-engined the plane.  Since it was more of a 1/4A size, I adapted a PeeWee for it.  I cut the backplate for the plane and made a new firewall to match.  Then I moved the firewall forward and installed the braces.  After I was sure it was where I wanted it, I masked and painted the fuselage and new firewall.  It's all ready to go.  I just have to find someone to launch for me now.

I was going to lay the cylinder horizontal again, but decided to put it upright to protect the needle on tumbles.  I initially fitted a 3-blade prop, but it looked awful, so I went back to a two blade prop.

Totally SLICK Mark! I love pic #2.. from that angle, the fuel tank looks like a muffler with flames shooting out!

Have you given any thought to building a pin-stooge to launch it? I just built a new one for myself. Pin-stooges are all I've ever used to launch. The only mod to the airplane would be a suitable tail-hook for the pin to engage. Something simple, super-lightweight and strong would be a "tab" cut from fiberglass window screen.. about 2" long x 5/8" wide. Epoxy the tab to the fuse (the screen-mesh provides optimal gluing integrity) and pop a hole in the trailing-end using a hole-punch for the stooge's pin. If you doubt the strength of window screen.. just try to tear it. 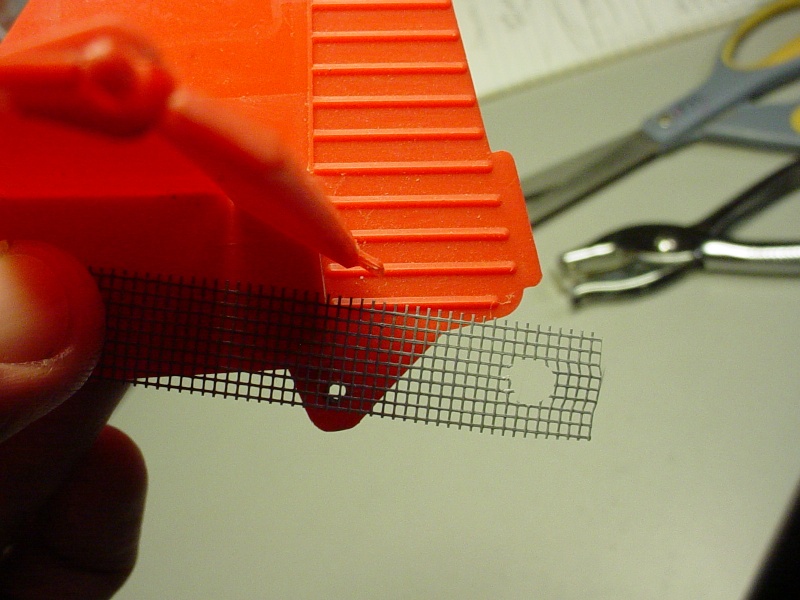 I took my little speedster over to the church a few minutes ago and set the camera up. Then music and singing again. It was on a Thursday last time. I figured it was an Easter thing, but maybe it's every Thursday now. No matter, the weather forecast looks good and my wife says she'll launch for me. It'll get it flown at the first opportunity.
Rusty
_________________
Don't Panic!
...and never Ever think about how good you are at something...
while you're doing it!

a lot of crap with my son going on

I'm in category 2, but will be in category 1 within a couple of days, well before the deadline.
Rusty

I am shamefully in category #4. and have no excuses. I hope to be at least category #2 by the end of the weekend.

Missed a category: attempted to fly but had technical/mechanical problems preventing the event.

I have fuel feed problem that I hope is not a reed problem.

Number 2, multiple times. Now that I am back home I am going to have space issues.

@batjac wrote:Well, you asked for it...

Kick the tires and light the fires. Y'all built some hotties. Get 'm out and come try to kick my ass!

When I flew mine today I had to clear weeds from a takeoff path and hold my handle high to clear any we missed, but it jumped off the sidewalk and flew tight. It was nose heavy, so it was landing as the fuel was running out. A cut down and rounded Cox gray 4.75-4 was 1.5 mph faster than the same size rubber ducky. Maybe if I fooled with the balance it would have been even more zippy.
Rusty

I'm in the same category as Phil. I hope to get some mods done today. As from tomorrow, the weather will be better over here.

I'm in category one now with two flights yesterday. I compared them tick by tick in Windows movie maker and submitted the fastest one. Two different props and 1.64mph difference by my crude estimation. I should have added some tail weight, as it dove like a rock when the engine quit. Better balance may have improved the speed. Maybe, maybe not.
Rusty
_________________
Don't Panic!
...and never Ever think about how good you are at something...
while you're doing it!

From wednesday on, the weather was very nice over here so I was looking forward to it to finish the plane and get it in the air. It took only 1 phoneall and I was upto my ears covered in work. The past 3 days I only saw home for sleeping. The parts for my modified landing gear are ready. They are made from a tin can cover, music wire and shopping trolley coins. I stole the idea from a Folkerts CL racer plan. It took me a while to find this solution. I wanted something that existed already as I myself was not succesful in designing my own landing gear. 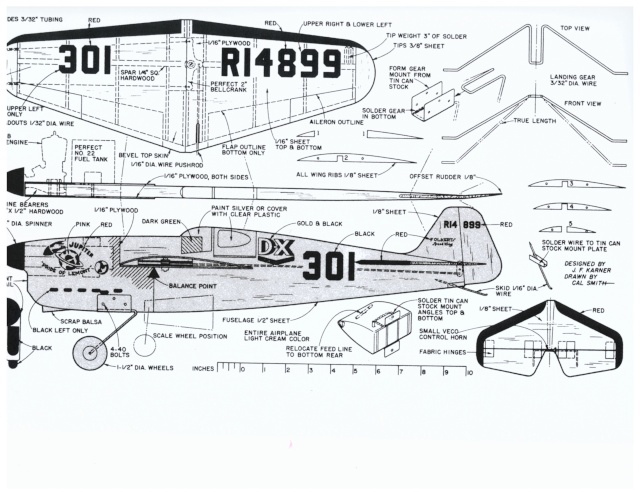 It shows scale and adapted CL landing gear. The parts are ready but I need to assemble and glue everything and cut off the existing landing gear. This will be a job for the coming days or weeks. So no video entry for me this year but I will fix the plane and try to fly it still. 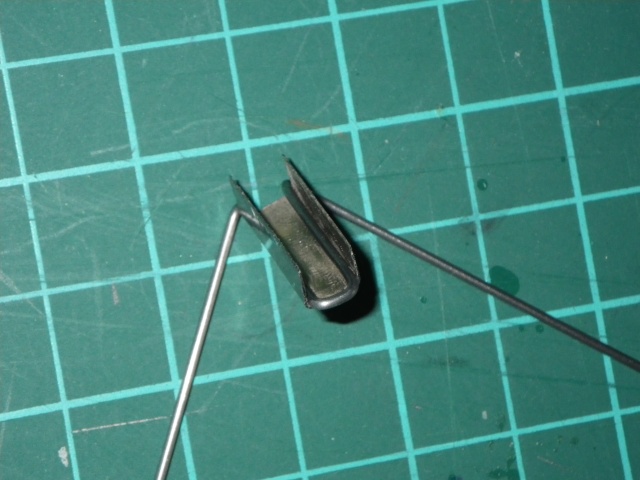 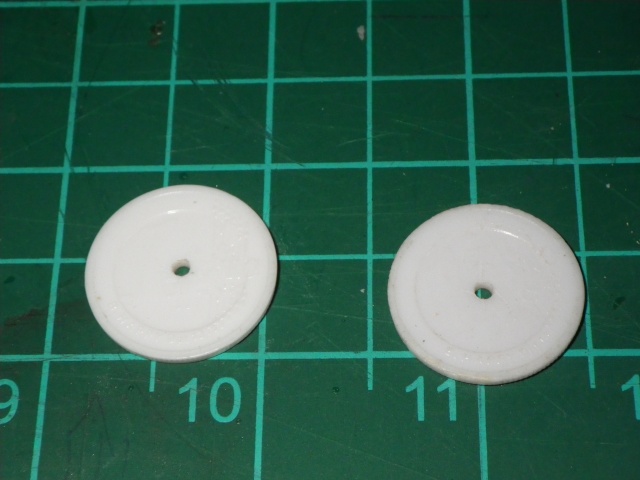 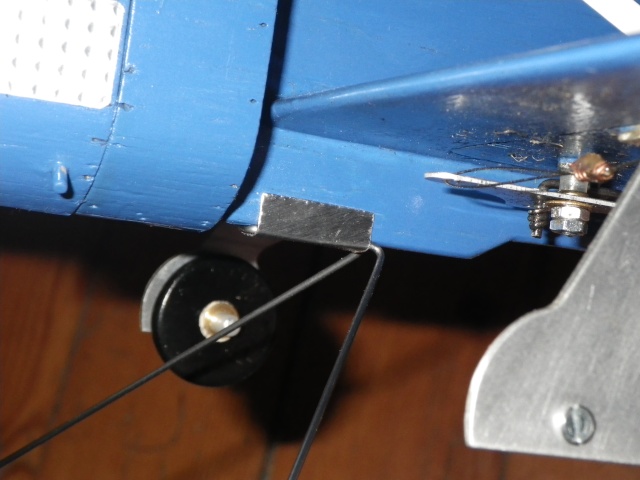