This is the design I'm thinking of building.

Welcome Mike ; Glad ur with us! For now I have not committed to a racer build design guess I had better get off the BS and clear my mine for a new build

Nemesis NXT will be cool Steve. The wing design is excellent and may be worth a little extra span to keep the area at 45 squares. That's going to be a skinny tail!

Do you guys know of any sources for small spinners? I know Brodak has aluminum spinners down to one inch that are very nice, but a bit heavy. Does anyone do small plastic spinners?

These are my favorites. Red and silver are shown but other colors may be available. I think I have a blue one from somewhere.
http://coxengines.ca/cox-.049-aluminium-spinner-valentine-red.html

I use these from Bob Mattes when I use APC props.
http://www.flyfreeflight.com/Site/Custom_Parts_files/IMG_2446.jpg

Thanks for the info guys. I actually got some wood cut on Conquest last night. I'll try to post pics later if anyone is interested.

@Mike Mulligan wrote:Thanks for the info guys. I actually got some wood cut on Conquest last night. I'll try to post pics later if anyone is interested.

@JPvelo wrote:The best advice I can give is after you get your motor screaming test every prop you can get your hands on. There's a 5mph spread in this photo. If I could just remember which one was the winner.... 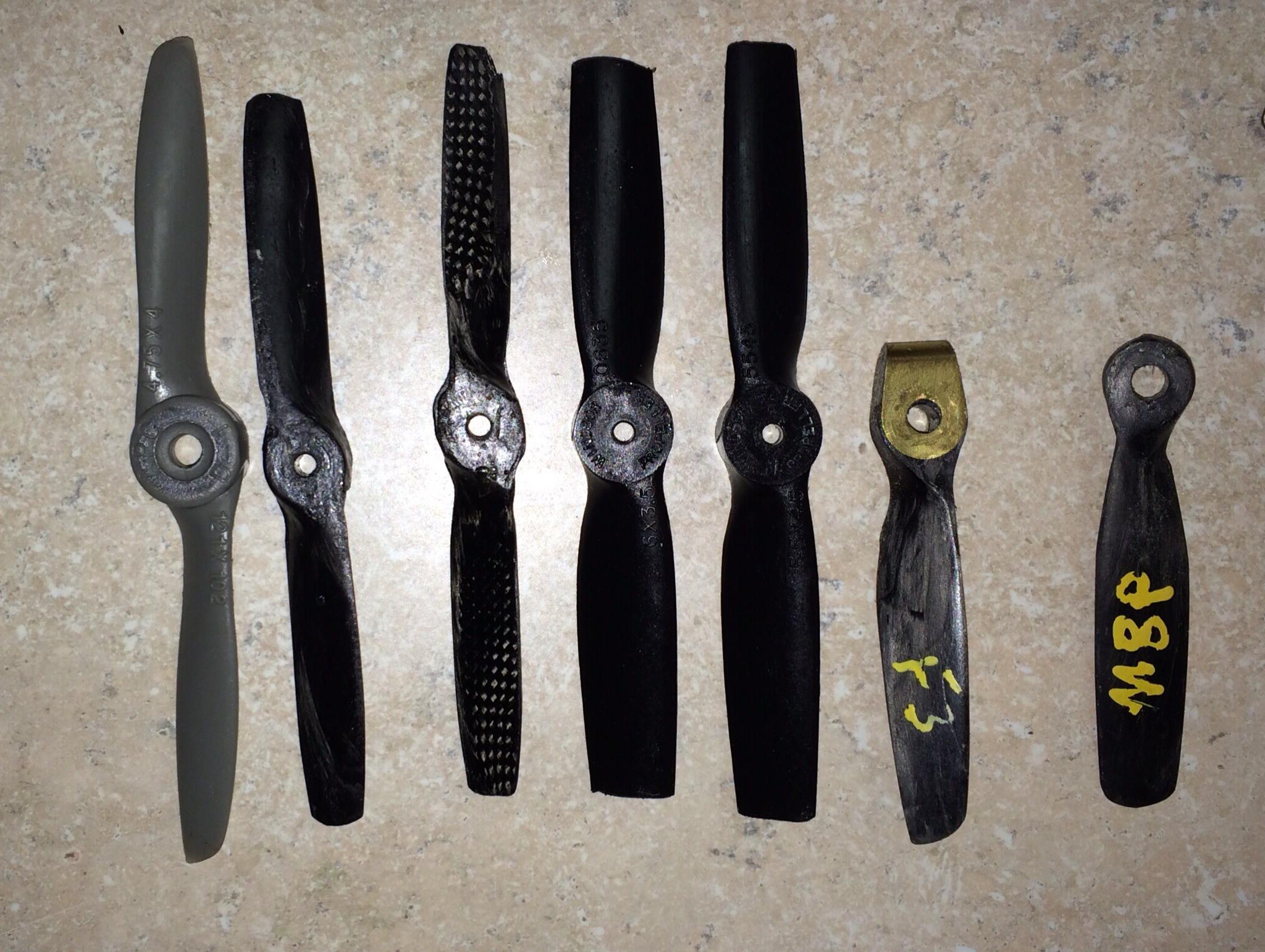 Single blade props!!? Wow, this is getting SERIOUS!!

Being a stunt guy, the small props in my collection are 9x6s.

Actually, the closest thing I have to a 1/2 A performance prop are a few of the old white Top Flight nylon 6x3s. I don't think that'll get me very far, so I guess I need to do some shopping!

I'm making some decent progress with the fuse and tail feathers. I'll try to get some pics up later toninght.

@JPvelo wrote:The best advice I can give is after you get your motor screaming test every prop you can get your hands on. There's a 5mph spread in this photo. If I could just remember which one was the winner....

Single blade props!!? Wow, this is getting SERIOUS!!

Being a stunt guy, the small props in my collection are 9x6s.

Actually, the closest thing I have to a 1/2 A performance prop are a few of the old white Top Flight nylon 6x3s. I don't think that'll get me very far, so I guess I need to do some shopping!

I'm making some decent progress with the fuse and tail feathers. I'll try to get some pics up later toninght.

Hey Mike, It's very cool that you and SteveJ have bumped this thread with interest! Give the APC 4.75" x 4" 2-blade composite prop a try.. There were some Brass hub centering bushings that CEF member Ken Cook designed, that were being sold on ebay.. and work real well from what I understand. If you can't source the prop from your LHC.. "Tower Hobbies" stocks them. 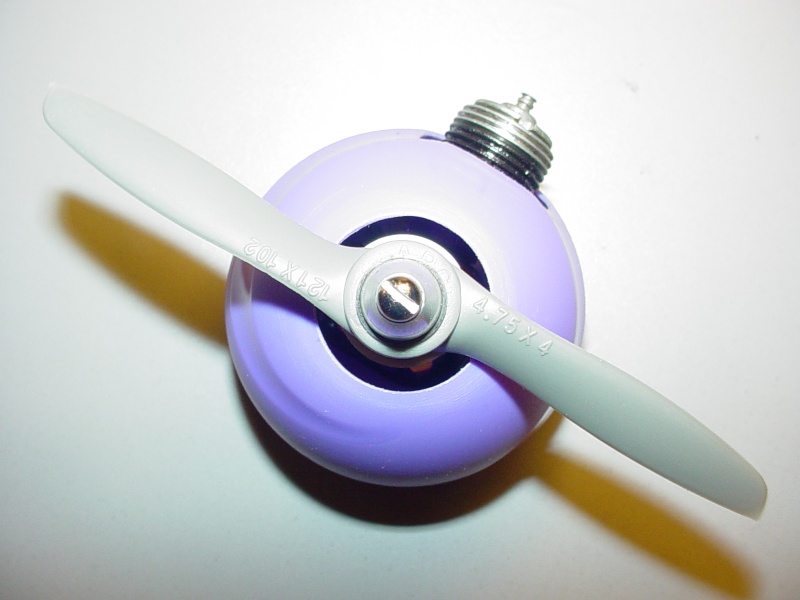 @JPvelo wrote:Tailfeathers count as part of the 12 inches. I need to reword that in the rules for next year.

I thought I'd BUMP this comment because the rules haven't been reworded to reflect it.. and it may influence choice of design on any new-model builds for contest #2

I decided to fly my corsair with no gear to see how much gain that will give us this time around. I also added a spinner to clean it up aerodynamically. Same fuel as the contest.
My official contest speed with gear and no spinner was 58.77mph. Today's speed was 63.93mph, a solid 5mph gain!

I can't wait to see what happens with a aerodynamically clean build.

Awesome Jim, thanks for the video. Very inspirational!

By the way, I lied about my prop collection. I found I have a bunch of never used McCoy 4.5 x 5 black plastic props. No idea where they came from. VERY flexy; probably become a 4.5 x 3 as soon as the engine starts...

Does anyone know anything about these things?

I have some old McCoy props. You are correct they are very flexible. If you think they will change pitch then they probably will. In addition they are not new and therfore suspect already.

I would mess around with new APC's or MA or maybe even cut down Cox props.

Jim, what diam lines and length (center of handle to center of plane)  are you using and what type? I feel this speed is pretty good. I did a Skyray build some years ago with a hopped up Black Widow. The speeds are similar. Cleaning up the plane is the next step. If you have a tank, build a fairing over it, if possible rid the lines of line clips and use a button bellcrank. I always toy with the idea of using a piece of Nyrod internally through the fuse and have the pushrod internal so there's no parasitic drag. Reducing anything that's more or less just hanging out in the open is going to yield more speed. Don't use rudder offset period. If line tension is of concern, sand a airfoil shape on the inboard side leaving the outboard side completely flat. You could go with solids lines if you wanted to take that route. These are very very fragile however and require the utmost care. If you could find a set of Pylon .006 solids this would also pick up some more speed. Have you also tried to repitch a APC prop? Ken

Ken,
I'm using 15lb test spider wire, 42' from handle to center of plane. I'm building a new plane and cleaning it up aerodynamically wherever I can. I think I've devised a way to fully enclose the bladder and fuel line and still be able clamp/unclamp it. I've not repitched an apc prop, do tell

! I'd really like to try and hit 70mph with the next one.

I would forego the Spiderwire as I feel it's draggier than the steel. It also becomes oil soaked and can really slow a model down. You can improve this by using a towel soaked in alcohol and wiping them down.  While .008's work and I've used them for long periods of time, without failure. .012's are the AMA requirement for Mouse 1. You could use .010 solids which MBS Model supply sells. Using solids means letting no one near your model. if they kink they must be discarded. Don't use them if they get wet from rain or mositure due to them sticking together.  I feel this would certainly improve your speed. I've repitched props using a heat gun. It doesn't take much. The only way to tell if it's working is to time the plane. Lending your eye or several others just watching it , doesn't insure that your going faster. Having a base stock prop and your improved prop trying them back to back is the only way to really see if it's working correctly. Document all of it. If one blade is pitched slightly more than the other, this isn't always a bad thing as both blades are grabbing clean air. Have you tried one of the single bladed props yet? I've also thinned out the blades from the center out . Ken

It might be helpful if there was an "addendum" to the original rules. There are changes but more notably; omissions of certain criteria in the "new" rules that would be of interest to past contestants who plan on building a different model for this 2nd contest. Ken mentioned building an enclosed pushrod running in a sleeve through the fuse; which is still not allowed. The use of streamlined fairings "is" now allowed.. I guess; although this is an omission from the old rules and should have some clarification on where and how they can now be used. Length of model still needs clarification to include tailfeathers... and any new contestants should be aware that models are to be of single-engine design only.

I'm honestly not trying to be a PIA.. I have both sets of rules saved to word docs. and went through them; highlighting any changes in "Red".. What wasn't immediately apparent; were the omissions... or; what is now allowed.

I'm new here and I really hope this doesn't sound like I'm trying to be a PIA either Roddie, but your post did make me wonder...

I assume that the "streamlined fairings" that you are referring to would be the "cheek blocks" mentioned below?

Engine cowlings are not only permitted, they are encouraged to enhance the scale appearance of the model. "Cheek blocks" will not extend more than 2.5 inches past the back of the firewall.

I hope we're not talking about speed type cylinder fairings or anything like that. I think cowlings should be limited to scale appearance. I assume that was the intent in the first place.

Also, the following would seem to exclude bellcranks mounted in a slot in the fuse with the pivot on the fuse centerline:

All controls, bellcrank, leadouts if used, and pushrod will be exposed and completely visible when the model is viewed from the top or bottom.

But I thought someone used that arrangement in the last contest. (I'll have to look again, I might be mistaken about that.) Was this a change for this go round?

I don't think either would change what I have planned for Conquest, but might factor into another airplane I have in mind.

I think you have it figured out correctly, Mike. Scale looking nose cowl and open air bellcrank and pushrod, horns, etc.
Rusty
_________________
Don't Panic!
...and never Ever think about how good you are at something...
while you're doing it!

Mike,
You got it right. There are however planes out there you could do a speed type fairing on and have it be scale; in fact I may build one.

Roddie,
I will clarify the length rule tomorrow. I will also clarify fairing length.

Rules have been amended to address overall length, nacelles, and enclosing fuel tanks within the nacelle.
The reason nacelle length of 3 3/8" from the crank case was chosen is that this is the length of a bee type engine nacelle with the old 2.5" from the firewall rule.

Just to get this straight in my head.

Launching can be made rolling, stooge, and hand launch?  I didn't see anything in the rules except you needed a launch and landing. It looked like you could omit the landing gear if it wasn't a fixed gear plane. So, the landing would be a belly landing.