I decided to fire up the Enya this evening seeing as it's been 3 weeks since I have smelt any castor.

This one is installed in the Bi-Slob. I tried to fire it up a while back and it did fire, but would not stay running. I chalked it up to crud in the tank as this one had been laid up a good long while. So long I knocked a mud dabber nest loose in the fuse!

This go around it fired right off adjusted easily to a nice 4-2 and ran through the tank. I like it! Traditionally a Bi-Slob touts a Fox .35, but the Enya looks promising so I'll give it a whirl. 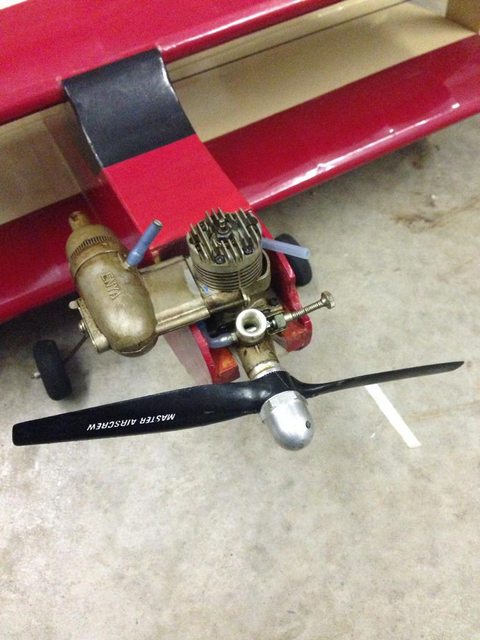 Ron, you will notice on the side of that muffler is a plate that rotates which has two holes behind it. Do yourself a favor and open those holes up and run that engine with that device open. The engine will be much happier. Ken

In fact it wasn't until this last run that I was even able to move the valve. The heat freed things up.

Is it supposed to be a priming port? Or is it just to free up a few hundred RPM's when running a muffler?

I suppose you could use it for a priming port, I'm pretty sure it was a quick option to bypass the muffler and RPM loss. As you probably know a couple hard flips with your finger over the intake will pull some fuel into the combustion chamber.

I like the old Enya engines, not a really hot engine and a little heavy, but easy to start and seem to never have a problem.

Ron, it's designed for less restriction, but the stock outlet is already too small. One thing to keep in mind, no engine is going to run as lean for as long as a period of time as the Bi-Slob allows. No plane has the nose straight up for that long. I mentioned this before, if you want to find out if your Fox .35 is fully broken in, bolt it on the Bi-Slob and see if it will sustain that lean of a run without sagging or seizing. I had many that would overheat and seize. Let them cool and go fly again. The Enya's are notorious for overheating and sagging until they just slow up and shut off. They're just a difficult engine to break in. Once they do, they're sweet runners. One thing to watch out for with the Bi-Slob is when you have it prop hanging is to not let the plane lower itself to the ground. The fuse is easily broken if the rear end slides back and strikes the ground. Good luck and enjoy it, they're loads of fun. Ken