Many of us have very fond memories of the PT-19 as they were, for many of us, our first CL plane. I would like, with your help, to put a chronological pictorial history (with dates) of the various models. 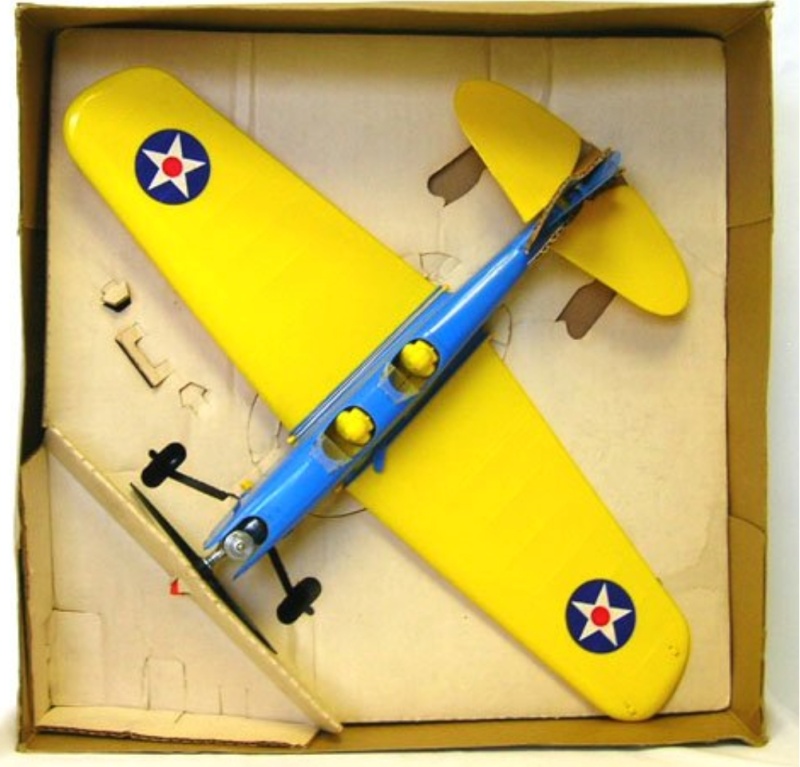 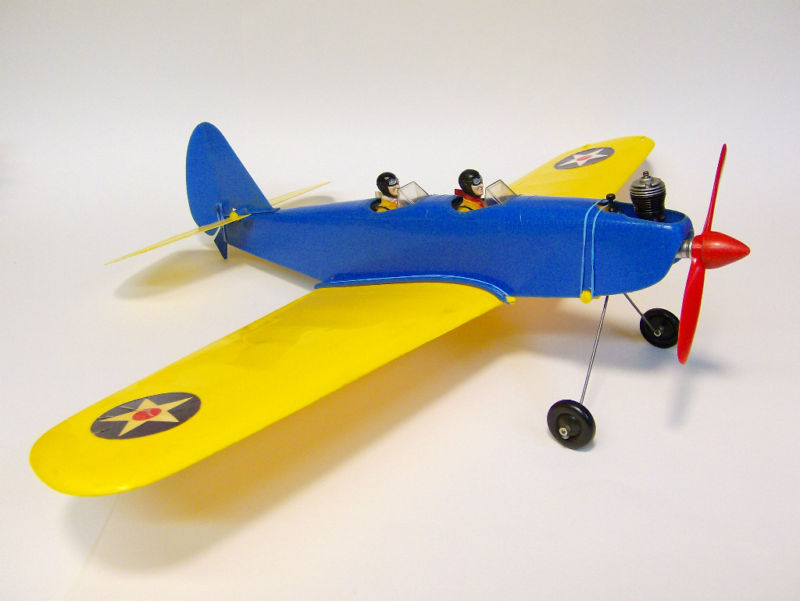 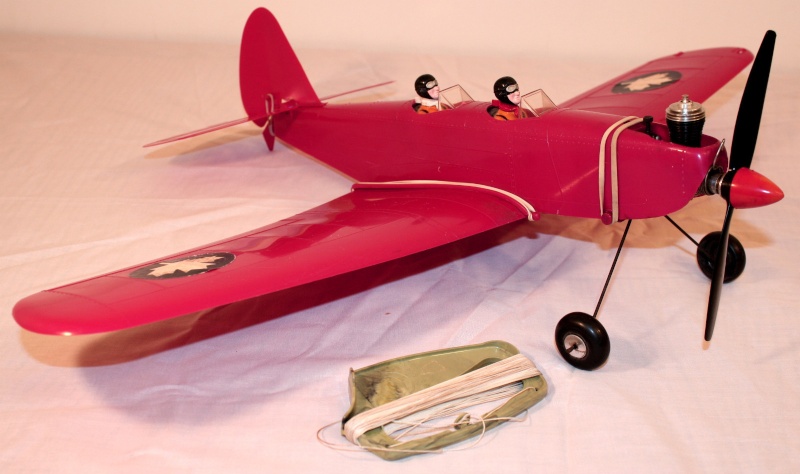 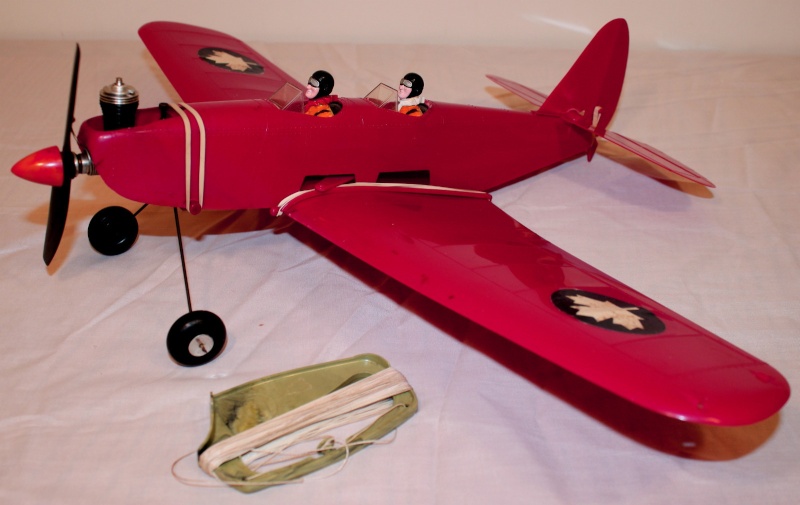 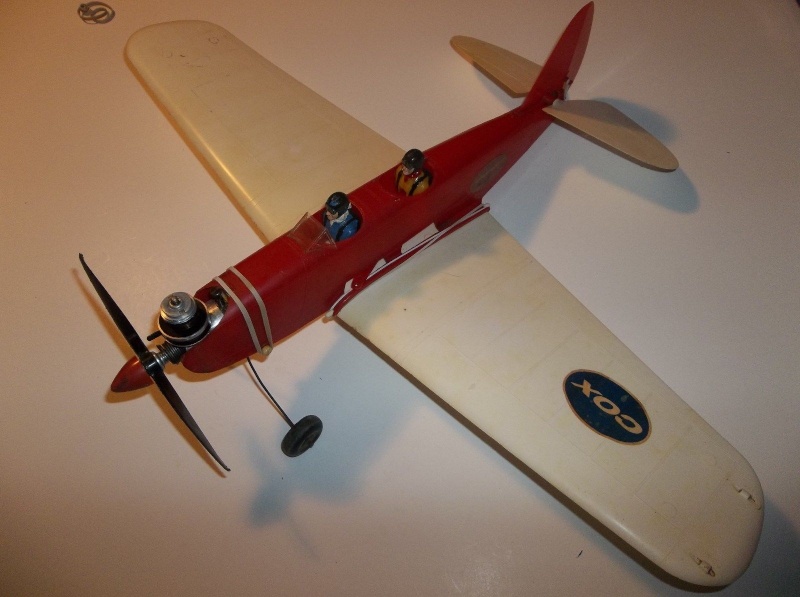 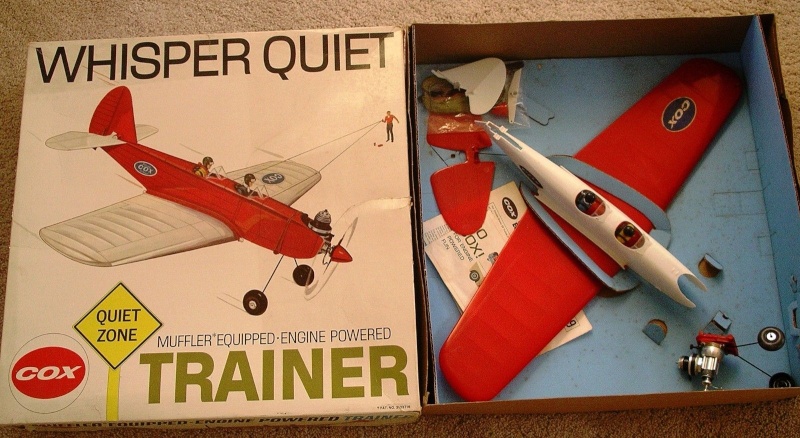 Couple more, not sure what dates...

How many colour combinations did they make six perhaps?am i right

The red one must be kind of rare i surf ebay alot and this is the first time i seen one very nice!

craig bernard wrote:How many colour combinations did they make six perhaps?am i right

That would be the purpose of this thread

Thats a nice colour scheme as well i guess you could swap colours that cox didnt even offer so there could be qui te a few combinations!thanks i enjoyed the pitures 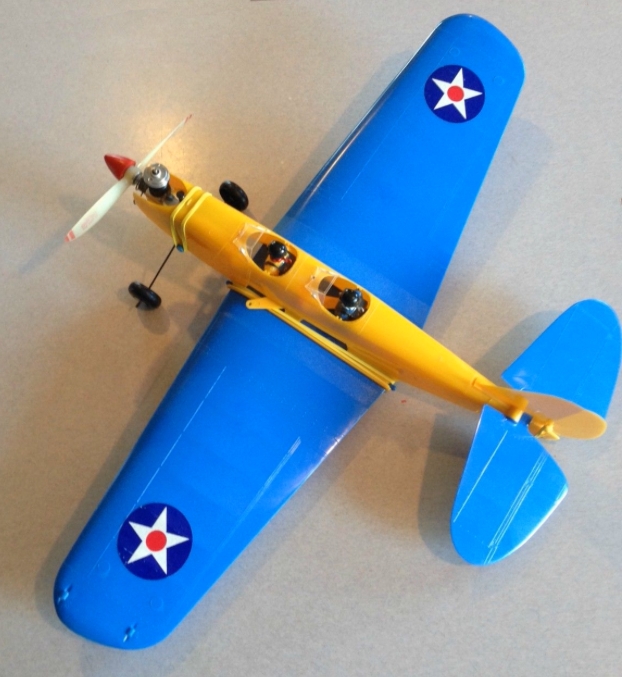 craig bernard wrote:Thats a nice colour scheme as well i guess you could swap colours that cox didnt even offer so there could be qui te a few combinations!thanks i enjoyed the pitures

I think these two have been swapped from original

Great pics Travis. Hopefully Mark or Mud pop on and round this thread out.

Man, you guys are making me want to fix my old PT19 up. it's front end of the fuse is pretty beat up. I even replaced one side of the nose with balsa. The LG wire broke and it needs some more balsa to get it back in action. 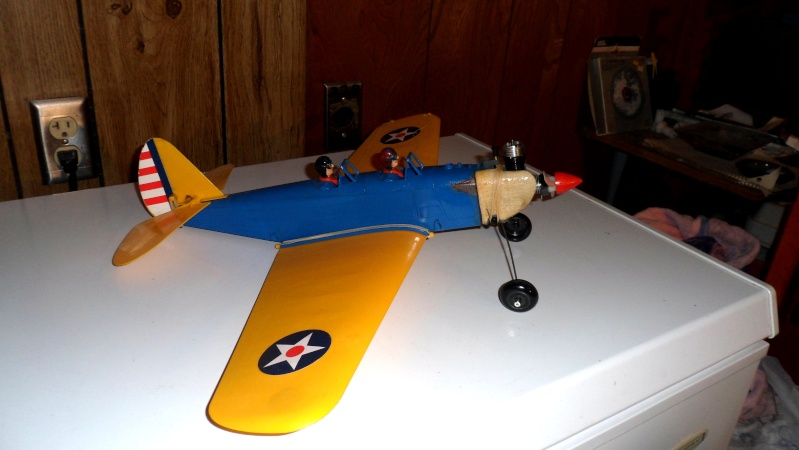 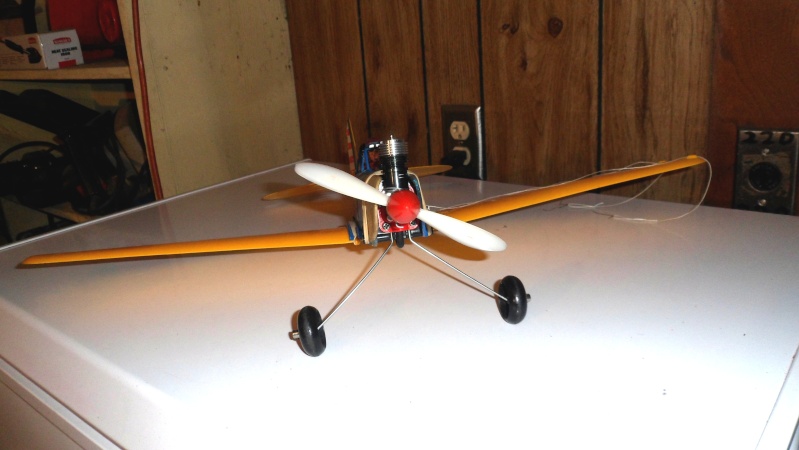 Canadian version was made mid seventies, probably the rarest version, it was made under license for the Canadian market.

Also pt-19 was made under licenses in Australia and I think England as well.

Canadian version was '74 or later as it has the twin orange full torso pilots. 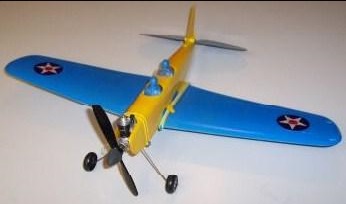 I'm not sure Tri ang made one here.
Certainly when I bought mine in Hamleys in Regent Street
in 72 it was a US made one. This was at a time when
they also sold the Tri ang Fledgling which was made
here.

My fondest memories as salvaging broken ones in the days following Christmas.

Rookie pilots crashed them with regularity due to the pilot's inexperience so in the trash they went.

Actually they only thing they were good for is flying "roundy- round". Trying to successfully loop one was near impossible. The wing, lacking a symetrical airfoil was the principle reason they were lousy to fly.

I think this is the one I had should have been around 68 or less my memories are there but I can remember were I was at the time ,?? only thing I may have left would bee the 049 baby bee ! not the killer bee Rusty got the special edition

"Back then" I was fly nothing other than full-size Class A and B stunters some of which I have previously mentioned. My very first Cox engine was salvaged from a trash can. Never did I envision becoming a Cox convert.

Times change and PEOPLE change and here I am on CEF to most everyone's amazment.

I think this is the one I had should have been around 68 or less my memories are there but I can remember were I was at the time ,?? only thing I may have left would bee the 049 baby bee ! not the killer bee Rusty got the special edition

This is a typical sample of a product engine with the "horseshoe" back plate. This particular model was used in the trainer PT-19 with a left turning propeller and spring starter.  I am still missing a matching rubber spinner for this engine.

These are Really Beautiful photos of Your PT 19 Planes, I remember when I was a kid flying these, It was so much Fun! They could withstand any type of impact and keep on going. I flew the last generation PT 19 about 5 years ago and then became dizzy. I know some of the Guys from the Garden State Circle Burners who fly Control line just about all day long and don't get Dizzy. Good luck and Happy Collecting!

Of course, like ALL lineages, the bloodline COULD take a disturbing turn once in a while... 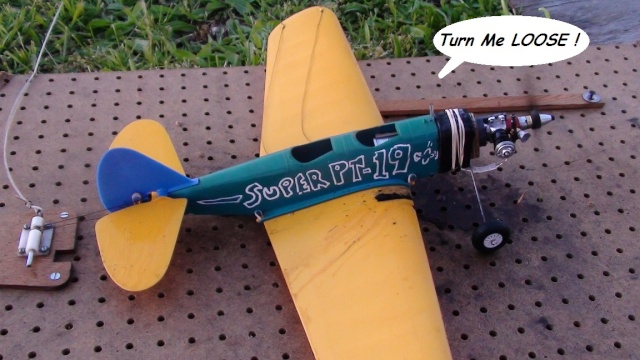 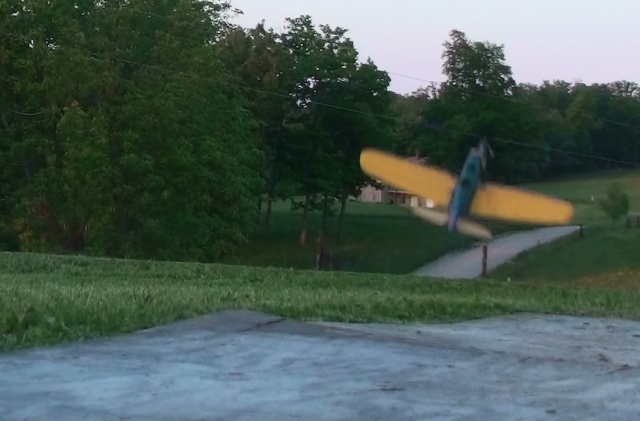 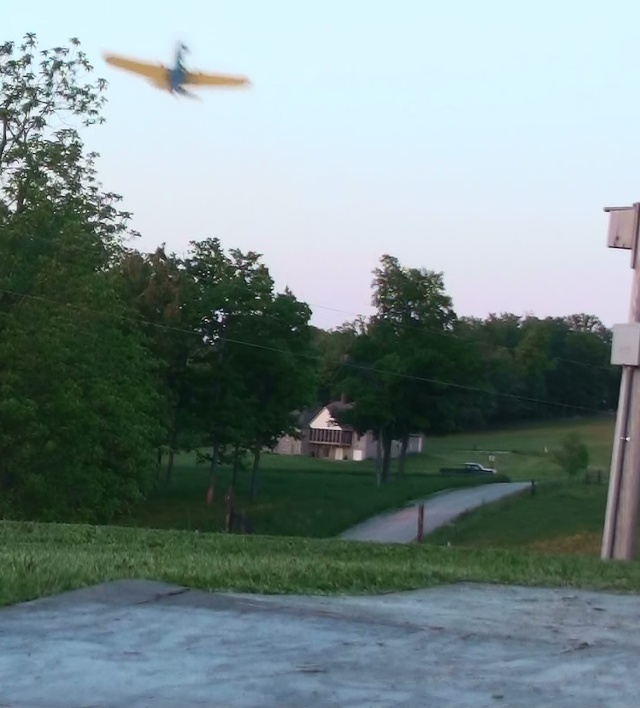 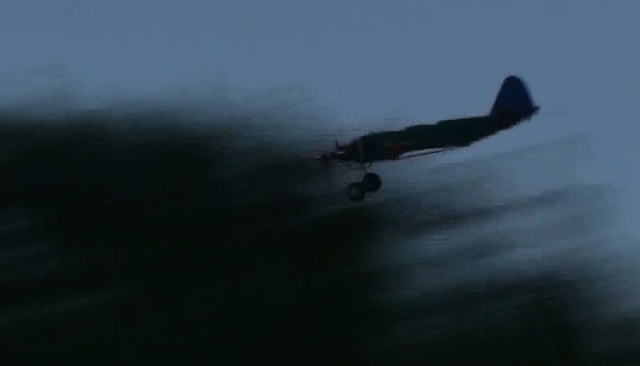 The stabilator/tail-plane of this model is a nice design feature .. from a durability standpoint. The part that breaks (eventually.. with enough mishaps) is the fuse. My model is on it's 2nd fuse because the 1st one is pretty beat-up. The fuel tanks have been problematic on mine too. (they pop off and won't stay on anymore) There's plenty of room for a short wedge-tank, balloon tank or bladder inside the nose though. This would at least give the model the ability to fly inverted.

I just bought this cox PT-19 trainer and odds and ends for $50 CAD. Great deal I think? This one is reverse colors from the normal model. The guy had it new since 1963 when he was a child. He said he only flew it a couple of times but got to dizzy and it sat since then. Does anyone know the average value of this model? Any other info of this model would be appreciated.