Log in
Search
Latest topics
» music vids.. some of your favorites
by GallopingGhostler Today at 9:35 pm

» unknown part where where these prop drivers used on?
by balogh Today at 6:56 pm

» Question for the pedantic engine collectors here
by 944_Jim Today at 3:55 pm

» Tee Dee .05 RC surging during idle any suggestions on how to fix?
by cmulder Today at 2:09 pm

» Peoples thoughts and experience with different glues
by 944_Jim Yesterday at 5:04 pm

Hello forum members. I joined this forum a long time ago but haven't posted very much since I joined. The reason for that is probably because I sold most of my RC models and equipment back in 2012 to add funds to my '55 Chevy Bel Air restoration. I sold the car a few weeks ago and while rummaging around the garage I came across my Cox engines. I put them away oiled and wrapped in newspaper and sealed in a Ziploc bag. Earlier today, I started up the garage furnace and mounted up the Golden Bee on my test block but noticed I must have gotten rid of all my RC fuel as there was none in the cabinet. I know these engines use a high nitro fuel with a min of 22% oil (at least 15% Castor) and the fuel is termed "1/2-A". I called up the closest HobbyTown USA but they didn't carry any "1/2-A" fuel. I do suppose I could go buy some Cool Power Omega 15% that I used to use before selling my models but I would like to see if I could get some actual "1/2-A" fuel first since I'm only going to be burning it in my Cox engines. While searching around online, I found this, http://www3.towerhobbies.com/cgi-bin/wti0001p?&I=LXDBNH&P=FR&gclid=CPbUuL3JhrwCFeg-MgodkFAAdQ. I'm surprised that it is still being made, but like everything else these days, I'm questioning if it is even the same "Super Power" stuff as we used back in 70s and 80s. The last time I used any of that "Super Power" fuel was about 4 years ago and my my Tee Dee .049 loved it, it was like stepping back in time! The fuel was even in an old tin can that has been sitting in the flight shack out at the field for who knows how long. Other guys used to leave bottles of fuel, extra props, glue, balsa and other supplies and tools in the shack for people to use in emergencies. I was tempted to take the entire can but I' not that kind of person. So has anyone used any of that new Cox fuel and is it the same as the good old stuff?

I would stay away from it. From the Tower web page that you linked: "Special 18% oil package consists of 90% synthetic, and 10% castor lubricant blend".

That fuel is a total fail.

There is a thread on here about it. I'll try and find it. Basically it is high synthetic.

Buy yourself some SIG fuel or Powermaster 30% and add castor.

Welcome back Steve.
Regarding the "Super Power" fuel,
in a word, no. Don't use it.
There's a thread that goes on about
it here. https://www.coxengineforum.com/t5113-hobbico-s-cox-super-fuel
There's also some options posted for
fueling your Cox engines.

You beat me to it Bob! I found the the thread you just posted. Jim (JPvelo)did an actual test I believe and the results were very convincing.

You were smart to ask first, Steve. I'm glad you guys jumped on that. Tower should be ashamed of themselves for advertising it as if it's made for the old "Real" Cox engines.

Sig Champion 25 is perfect for Cox engines. $8.39 per quart. Try to buy enough goods from them to discount the shipping charges. After about $25.00 it drops to $9 or so bucks.

Others like Powermaster are good too if you can find it. My rule of thumb is 20-35% nitro and 20% oil, at least half of which is castor. The Sig and Powermaster are 50/50 synthetic/castor, which is fine.

NO! Don't buy the new Super Power Fuel at all!


All the fuel suggestions others made above are good, I use Sig Champion 25 in my engines.

If you really want the real stuff for nostalgia, there's these on eBay: http://www.ebay.com/itm/NOS-Vintage-Cox-Thimble-Drome-Tether-Car-Plane-Boat-Glow-Fuel-Metal-Can-FULL-/111243120968?pt=US_Radio_Control_Control_Line&hash=item19e69b5148 Pricey for a pint! Its likely still good but its still a gamble as you never know how well its been stored over the years.

If you want to order from Tower they have a few all castor fuels, I use Sidewinder Race by Morgan fuels.
It is 30% nitro, 12% castor and add 3oz castor. You have an all castor fuel that is 26%nitro, 19% castor.

I'll check my math, those charts a confusing to me

EDIT: Damn, I hoped I had caught that before you saw it.

When the "genuine" Cox fuel became unavailable.. I switched to Sig "Champion" fuel. I use 25 and 35% (nitro percentage) which works great for me... and other people here would endorse it as well. It's available direct from Sig Manufacturing in pints, quarts or gallons.

I'm not sure how you intend to use your Cox engines Steve, but if you want to fly control line; you could combine shipping on a Sig order.. and get yourself a Sig "Skyray" kit (1/2A-$14.59) and a quart each of 25 and 35% fuel.. for less than $50.00. This would give you enough fuel for a while... and a great little model to mount that Golden Bee on! 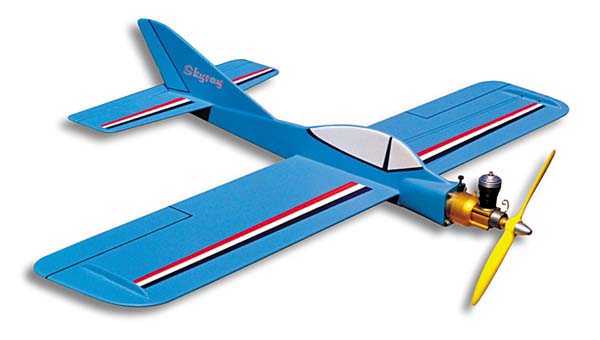 Sig also has some great little 1/2A "RC" airplane kits for your Cox engines... if you want to get back into that. The recently developed "spread-spectrum" radios are great.. and if you have an "older" radio... you can easily convert it to spread-spectrum.. on the "cheap"!

Good luck and WELCOME BACK!!!

I made a mistake, I figured 36 total oz, should have been 35 total oz

Unless I made another mistake

crankbndr wrote:I made a mistake, I figured 36 total oz, should have been 35 total oz

Unless I made another mistake

I'm going to cease calculating and go with the flow. Close enough is good enough.

Thanks for all the responses. So the new "Super Power" fuel is no good, good thing I came on here first as I almost bought it yesterday. I remember Sig fuels, I'll try to find some. I'm going to HobbyTown USA today and I'm going to see what they have. I could do what I used to do for my Cox engines, I would take some Cool Power fuel and mix it with Castor oil from the grocery store in a jar. I just don't want to be stuck with a gallon of the stuff.

I'll report back, Thanks everyone!

Steve..... don't waste time with pharmacy castor oil as it is NOT stabilized*.... yes it will work and many do use it (in a pinch) but you have been patient this long, wait another 7 days and get Sig to send you good fuel, and a full quart of castor oil (enough for several years) and get COOL KIT OR TWO

Better yet stop in at Berni (coxinternational.com) for the kits, oil and other stuff like reeds, and gaskets

* stabilized or "AAA" blend Pure castor oil is NOT for human consumption...it has been heated and filtered to mix and burn properly in an Internal Combustion Alcohol powered engine

This is the Castor I use, it's not cheap, but it works well.

I took a trip out to HobbyTown USA yesterday. All they had was all synthetic, racing and car and heli fuel. There was an older guy there who suggested I buy a quart of O'Donnell 15% High Performance Airplane Fuel to use with little steel piston engines (I know its more for the socket joint in the piston). After looking the bottle over, it was only 18% Castor/synthetic oil and the amount Castor wasn't specified. I bought the fuel anyway. I'll have to sit down with pencil and paper to do some calculations to figure out how much Castor I need to add to bump it to at least 20-22% total oil content. I have been using grocery store Castor oil since the late 80s and even some before that, never had any trouble with it and all my engines are still strong. Back when I used to buy gallons of fuel, I flew my larger models with the Rossi .61, OS Max .40, Enya .60, etc. more often than my little Cox planes so I would just add Castor to the mostly synthetic fuel I was buying (Red Max, Wild Cat, Cool Power, etc). I only want to bench run the engines now, I no longer have any models to use them in. Unless I happen to come across something somewhere, I likely won't build any models for them anymore. I'm wondering about the old can of fuel Admin posted about in a few posts above, it is a little costly but it may be worth bringing back some memories.

I'll mix up a little fuel and let you guys know how it goes.

Steve Carlin wrote:I................After looking the bottle over, it was only 18% Castor/synthetic oil and the amount Castor wasn't specified. I bought the fuel anyway. I'll have to sit down with pencil and paper to do some calculations to figure out how much Castor I need to add to bump it to at least 20-22% total oil content. I have been using grocery store Castor oil since the late 80s and even some before that, never had any trouble with it and all my engines are still strong. ..................

Many times an email to the manufacturer asking about the synthetic/castor ratio will get results --- I've found them to be fairly responsive.  As far as doing your calculations, you can get a calculator here:

Choose fuel guide at the top of the left column --- it will provide a link to the calculator. This is the calculator shown in one of Rusty's posts.

I've been using Klotz BeNol for years with good results ---- if you have a decent sized motorcycle nearby, they may carry BeNol since it is used for racing castor on track bikes.  It's also available from multiple sources on-line including Tower Hobbies, albeit cheaper from non-model sources.

I use Cool Power Sidewinder Pro 30%N/10%O --- according to an email from Morgan Fuels, the oil is a 50/50 syn/castor blend. I chose this car fuel due to the low oil content ---- then I can add castor without diluting the nitro too much when I push the oil percentage up.

Any pics of your 55 Chevy? I use to go by CLSSY56 on TriFive.com and ChevyTalk.com and have since sold my 56 Chevy. I miss it from time to time still....

I've always made my own fuel, I fly a lot of older combat specials and stuff and fly them on 20% caster 25% nitro.
I buy pure nitro buy the gallon from Klotz for 50 bucks, I get my castor bean oil from Sig, and the local race car Shop sales alcohol for about 3 bucks a gallon. I can mix up a lot of Combat 1/2A fuel or fuel to run in my McCoys and fox stunt engines on 5-10 percent depending on the weather.
I have cut my fuel cost by 2/3's and get exactly what I want.