Yesterday I got set up behind the house for my Ringmaster's maiden flight and after one successful flight, I had a sobering incident. Having never done this type of launch before nor even seen one, I have to guess at everything. My release is 2 1/8" eyelets 1" apart with a 3" pin. After making sure the pin was in place, I cranked the engine for my first flight. In hindsight, I now see my first mistake. My wire stay that attaches the tail to the stooge was mounted too low on the plane (in the plywood tail skid) allowing the tail to lift off the board when the plane is pulling against the release. That launch went smoothly. The second did not. After getting reset, I started the engine and this time the tail began to hop up and down pretty hard because of the unrestrained elevator in the propwash. I immediately tried to steady the plane so I could pinch the fuel line but before I could put my hand on the fuse, the stooge (apparently) vibrated loose allowing the plane to accelerate into my right knee.
I got a hole in my jeans, a broken prop and spinner, and 3 minor but painful scrapes on the side of my knee.

First, I'm going to re build the wire stay so that the pull of the plane holds the tail against the board, or that, one it's pinned, doesn't have room to move.

Second, I'd like to come up with a better pin release. Something less vulnerable to vibration. 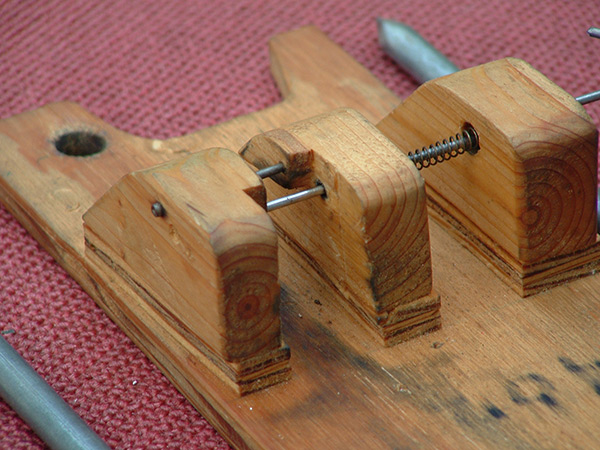 I have some ideas, but before I do can you take a picture of your stooge with the plane attached?  It would help to see what you are dealing with.

Edit: glad you are ok, must have been a scary moment.

I'm sorry, I have a real good one I made and like. Tried to post it here but it didn't work. I am a member of Brotherhood of the Ring and have it in my RMS/OTS album. I'm listed as Fireball there also. You have to be a member to get in and it doesn't cost anything. Really good people over there and lots of experienced help.

Last edited by Fireball on Sun Mar 09, 2014 11:29 am; edited 2 times in total (Reason for editing : The image did not come through. http://www.brotherhoodofthering.info/mbbs22/photos/show-album.asp?albumid=94&photoid=1783)

Hey Matt, Have you looked through this thread yet?
https://www.coxengineforum.com/t5577-my-simple-1-2a-stooge?highlight=STOOGE

It will give you some ideas for building another stooge or modifying the one you have. The 1st post in that thread is mine, and the photo shows a stooge that I built for 1/2A airplanes.

A spring-tension release pin is a must!! I purposely build my airplanes with a substantial tail-hook to accept a stooge-pin. For your airplanes that have a tail-wheel, you can make a stooge-link the same way you'd make a lead-out.. only shorter (i.e. a short length of .031" stranded cable with loops on each end, and a line connector for attaching to the tail-gear. The tail-wheel acts as a washer.) This may however; exacerbate the condition you were experiencing with the tail bouncing... but at least the model is locked-in until you're ready to release it.

Here's a stooge-link that I made from music wire. A line-connector would allow for swapping between different airplanes having tail-wheels. 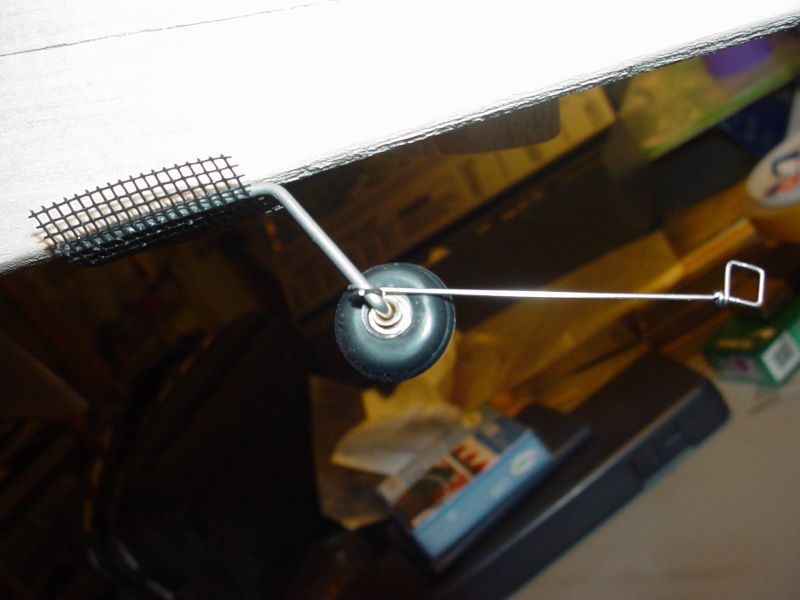 I plan to build another 1/2A stooge that has a guide-rail extending forward, for the in-board front wheel to ride against. When you run to the handle and check your controls; sometimes the nose of the model slides... and pulls-in. A guide-rail would prevent this, and keep the model at 90 degrees to the lines until it's released. I'll probably use 3/8" square hardwood stock for this, to clear the axle.

Although I don't call our grandchildern "stooges" they love to hold my C/L planes prior to launch.

Just came inside from doing that very thing.

Yes Duke get out there and do it it's nice outside!

Still would like to see a picture of yours as it may just need a minor modification to make it more functional and safer.

I do not use a stooge with my large planes, but do with 1/2A. Not saying I wouldn't it's just I always fly the bigger stuff with other folks.

This is what I started with:

This is what I came up with during today's foul weather: 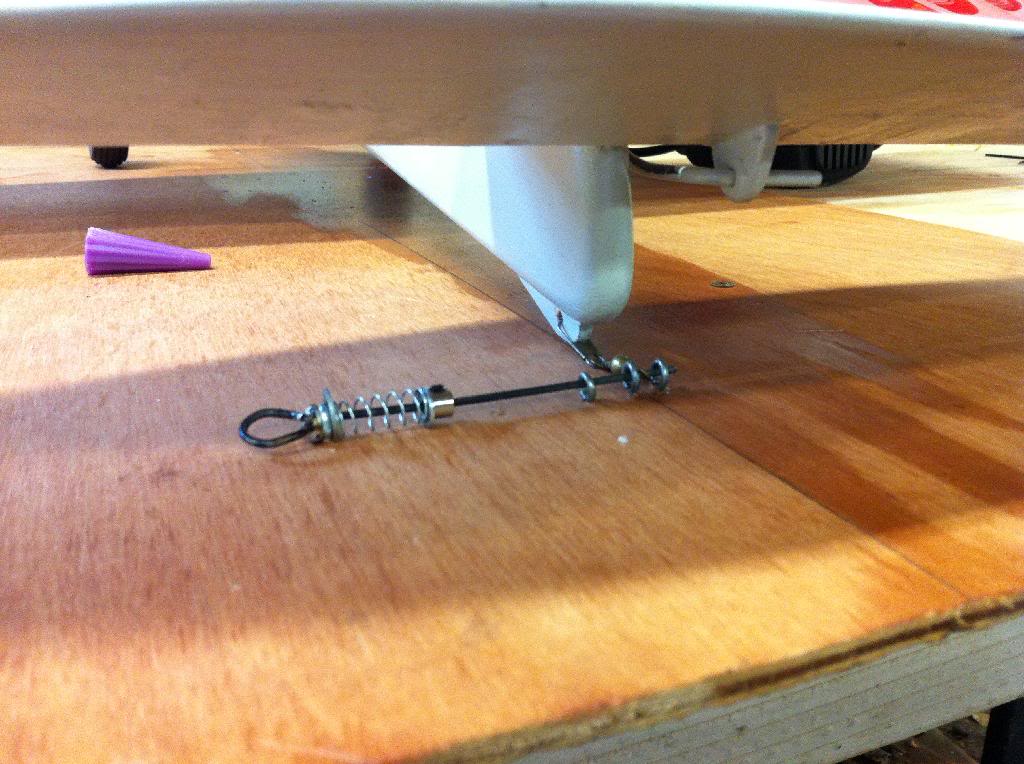 It's hard to see, but there's a brass eyelet in the tail skid of the plane. I'm going to add a tail wheel soon.

That should do it.

Cribbs74 wrote:That should do it.

I hope so. 9 out of 10 times I fly, I'm alone. Except for my kids they're a little intimidated by the nitro engine for now.
Thanks a million for the input.

I sent you a PM concerning your Ringmaster.

Nice! I'd think about making that pin a little longer, you don't have much for a safety factor if you'd accidently tugged just a little bit on the string. I used a longer skewer slightly bent, so it took a definite pull to release, you could do the same with spring.

You might also think about using a chunk of peg-board for your base. I got a bunch of the stuff when the airport remodeled (I'm a shameless dumpster diver!).

With 1/2A planes and such, it works fine all by itself, and I use wire tent stakes to hold it in place for launching larger planes. It even works well when I fly from the concrete ramp at the airport, as I can select the holes that line up with section lines.

I also pack along a battery-powered screwdriver and firring strips for "side-wheel chocks" as guides to keep the plane from dancing around on the board, AND allows me to take up the tension in the lines without pulling it toward me at launch. The electric screwdriver lets me quickly move the strips around to match the landing gears of different planes... 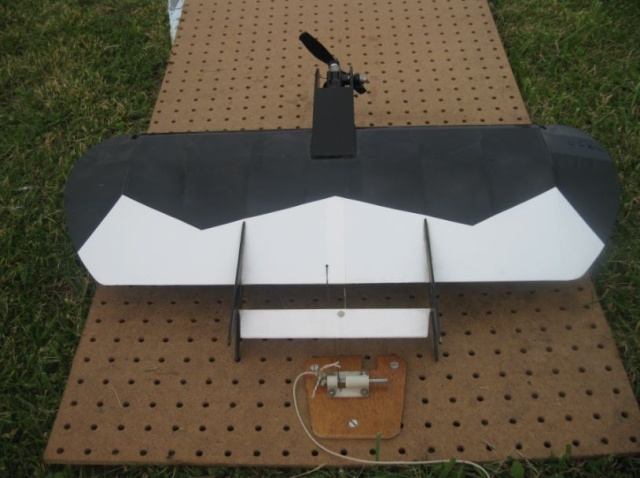 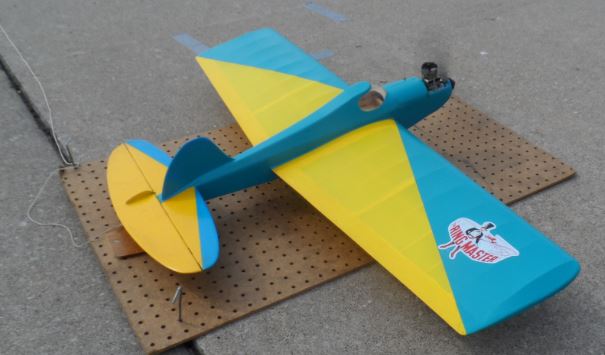 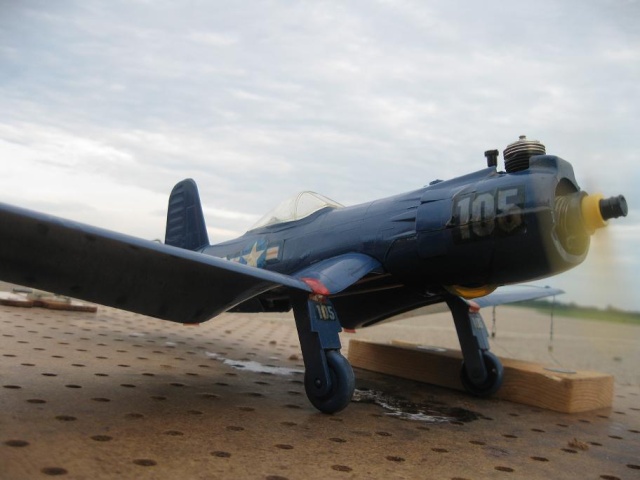 Mark Boesen wrote:Nice! I'd think about making that pin a little longer, you don't have much for a safety factor if you'd accidently tugged just a little bit on the string. I used a longer skewer slightly bent, so it took a definite pull to release, you could do the same with spring.

I just bought some more music wire. I have longer springs as well. I think you're on to something.

Here is a picture of my stooge. I copied Kims' setup. I used 1/4x1 strips as wheel stops. 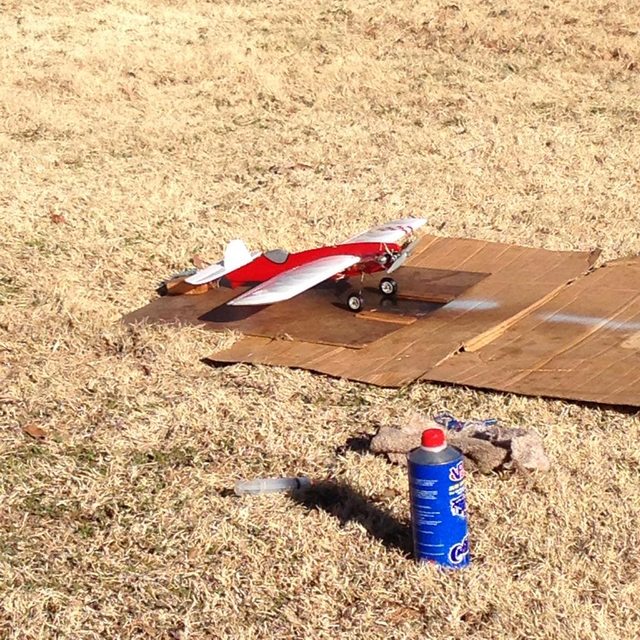 Mark Boesen wrote:Nice! I'd think about making that pin a little longer, you don't have much for a safety factor if you'd accidently tugged just a little bit on the string. I used a longer skewer slightly bent, so it took a definite pull to release, you could do the same with spring.

This is my revised release. Longer spring and more pin actually being used and a pretty stiff spring.