On Friday 14 March I bought a HARLEY FXSB 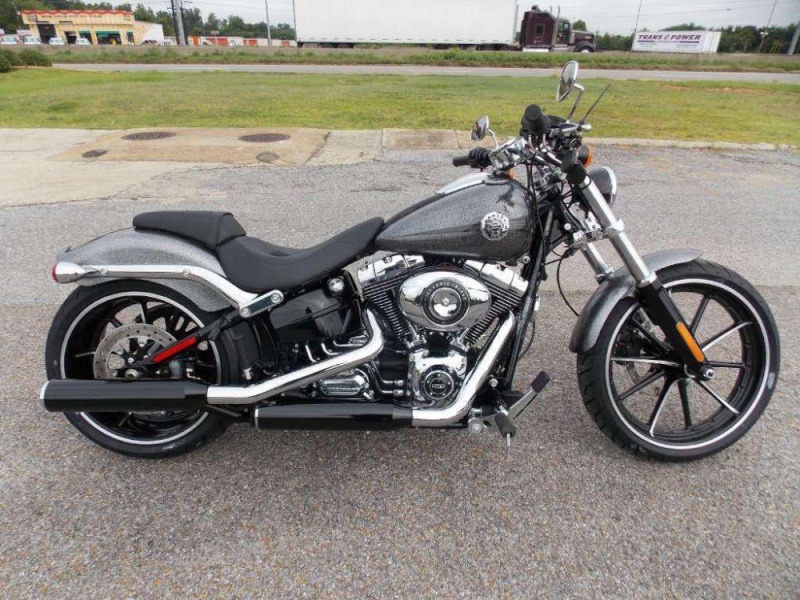 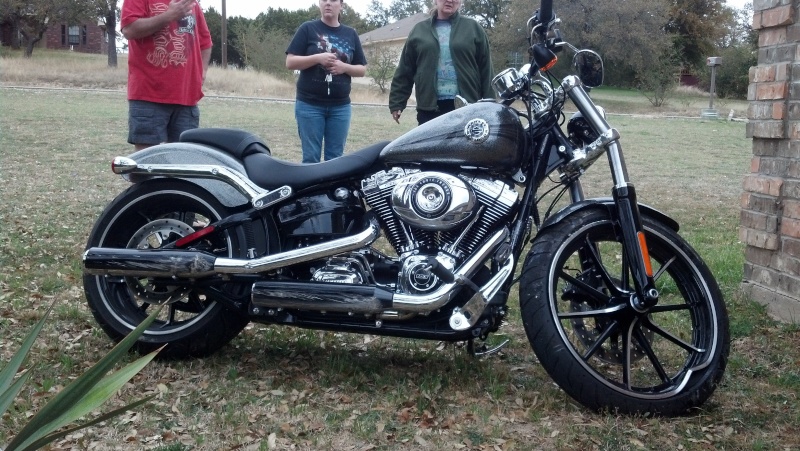 new bike on order
I will mend but takes time
Wet, gravel, being cool with new bike in neighborhood

On Monday the 24th I misjudged a corner with gravel and destroyed me and the bike
broken left leg and hand
broken head (helmet; yes)
several broken vertebrae

new bike on order
I will mend but takes time
Wet, gravel, being cool with new bike in neighborhood

Fred, sorry to hear that, dude!  Hope you heal quick.  I've done the "hitting gravel in a hairpin turn" thing.  I know how it can catch you off guard.  But, I must say, that's very optimistic, ordering a new bike so soon...

Though, that bike sure looks fixable.  If you can build a ukie, you should be able to set that bike to rights in no time.

Glad your alive. I am not going to scold you. I am sure your wife is doing that daily.

Fred
I so sorry to hear this, even though I haven't met most of you in person, it's like we are good friend. I hope you heal up quickly.

Glad you're able to tell us about it Fred.
It would have really sucked to here
it from someone else.
Hope you heal quickly and the physical
therapy doesn't take too long. Summers comin'.
Bob

She Who Must Be Obeyed

bike was totaled by insurance company and was my dream bike

Avoidable accident--- yes
destroyed bike and rider due to drunk, excessive speed, lack of skill--- no

, Glad the hear your on the mend. You can always replace a bike. Your noggin is another story. Sure was a beautiful bike though. Hope the new one is just as cool.

Since the Insurance company wrote it off are you going to claim the salvage? It really doesn't look that bad from the one pic you posted. Even if you didn't rebuild it, it looks whole enough that you'd have good spare parts or could easily sell the engine and part it out to make some bank.

WOW ! That was unexpected , Glad you are ok bike can be bought . Owned one most my life too mostly dirt killers and I know what it feels like > take care of your self ! Hopefully it will be a long summer so you can get back in there. Keep use informed...

Fred, I'm very sorry to hear this news... but very glad that you're ok. I wish you the best of luck with your recovery.

Aw man, Fred, sorry you and the bike got busted up. I'm sure glad you weren't totaled. I hope you heal up quickly enough to enjoy the Summer. That was a beautiful bike.
Take care,
Rusty
_________________
Don't Panic!
...and never Ever think about how good you are at something...
while you're doing it!

...so next week jr. and i start our motorcycle safety class...may we should look at go-karts?

MSF does a good advanced rider safety course. It's good info for even experienced riders. The basic riders course teaches you how to ride and the info is good as well. In most states either course counts for the road portion of your license. Plus you get an insurance discount.

yep, I told jr. this was mandatory for this project, the courses are put on by the state of Illinois. I had bikes as a kid/young man. and if we can eliminate rider error we can cut in half the probability of an accident.

Sorry to hear of your accident Fred. Hope you heal quickly.

Thank to all for the well wishes...you guy are the best

Sometimes things just happen despite of all our experience  That MSF info I posted wasn't directed at you. It's just gee wiz info for anyone listening.

Hope you are feeling well today.

Tough news, Fred. Hope you're well on the way to mending. While disheartening, the bike is replaceable; you're not -- certainly glad to hear you will be back up to speed in the future.

I ride a BMW 1200 GS and I am older than you. I have had may near things on this beast - similar crcumstances - a heavy bike with phenominal acceleration for its weight.

Every new bike I have had - I have gone through a trauma at some point. When you first get it - you are very wary and careful - then over confidence sets in resulting in .................. An experience that may or may not be painful but certainly shakes you into shape.

I feel for you after this experience and do hope that you make a full recovery and are able to return to biking.

Best wishes for a speedy recovery.

Interesting how many of us have similar philosophy on many things

There are many friends and family in my circle who insist playing with 25,000RPM engines and razor sharp propellers is insane...that my collection of firearms approaches some belief that I am a nut...And riding any motorcycle, let alone a big bike, is a death wish

I am determined to live my life on my terms, and I would never presume to tell another adult what they should or should not do as long as their choice doe NOT adversely impact another citizen

Fred
I don't know if you're nuts or not, but it doesn't have anything to do with your planes, bikes, guns, or political beliefs.

How are you feeling now? What's the doctor want you to do next?

I will mend faster than most men my age. Motivation...lots of stuff yet to do in my life and wife and I deserve a leisurely adequately funded retirement

I am not depressed nor wallowing in self pity

Fred
It sounds like you have a good outlook on life and a wife that will take care of you. That's half the battle sometimes. Here's to a speedy recovery my friend.

Looking for something else I found this older thread

Well, later I canceled the purchase...

What was not in the above post was the series of events MY WIFE had to live through:

One also found my cell phone (I do not lock mine) and found my "call wife in case of emergency" number, and did

and ambulance arrived and called for life flight... as my wife was heading to the accident the helicopter arrived and I was moved 700 yards to the aircraft

She arrived to find I had been life-flighted away and no one local knew exactly where they were taking me....the ambulance had already departed

She was panic stricken thinking my injuries were dire (they were bad but not really life threatening) and it took her precious long (too her) time to contact EMS and determine where they took me...

Because of the head injuries, they had me in emergency surgical but no one could tell her my true condition--- so for 3 hours she waited ---then finally asked about me----only to be told a second surgical team was now working on me...what they did not tell her, was the Ortho guy was available to fix my leg and hand injuries and they decided it was best to just keep me under...the leg and hand bionic rebuild was 7.5 hrs long

A few weeks later as she was assisting yet a third in home physical therapist, I was asked by the new lady if I was going to get another bike... I said no...

My wife looked sideways at me because she knew the new replacement was on order...

I told the PT gal... no way I could ever leave on the bike to a friends place, or local VFW, and not have my wife being nervous for a few hours until I returned

We had been married 31 years when I said that... and I think I extended her life by making that decision

I am still looking and procrastinating BUT