Log in
Search
Latest topics
» 19 inch Swinger by Frank Scott from December 1977 Model Aviation
by balogh Today at 12:27 am

» Building a gas powered windmill and now a boat
by davidll1984 Yesterday at 10:42 pm

» Got the Wen Max Corsair today
by cstatman Yesterday at 6:40 pm

» "Forcing My Brain To Learn Things It Doesn't Want To Learn" Still Messing with the Dragon.
by andrew Yesterday at 9:50 am

Had this posted on my Facebook page, so it's written with the intention of being understood by non-modelers, but thought it might be interesting to some here.  I got this ARF Kadet this past February from Tailwinds Hobby shop in Cape and have been occasionally poking at it to get it going.

Sure, you can 'Scotch-Tape' an airplane together for some photos, and make people think you actually possess a Flying Machine...but without it's innards properly installed and tested...it ain't nothin' but a dust catcher out in the shop !!! 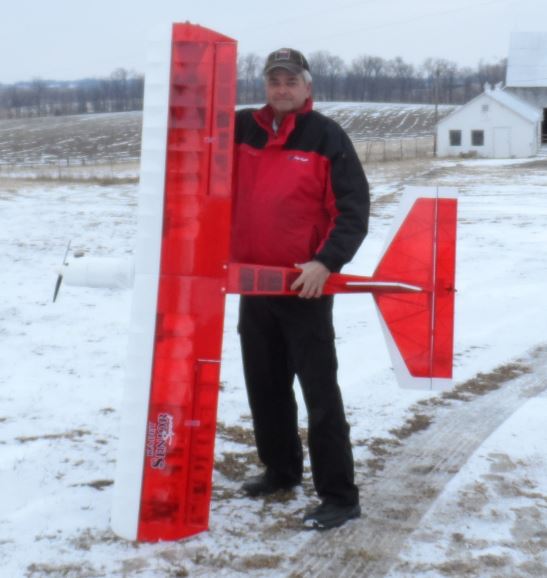 Unfortunately, I'm a hard-core 'Mood Builder', and know better than to get anywhere near my toys when I don't feel like working on them...ESPECIALLY...when they're in the tedious stage of needing fuel tanks and radio gear installed.  So, my various projects can take a while to get in the air.

On the bright side, my 'Tedium Task Mood' arrived yesterday...some moments after lightning chased me from my lawn mower.

The construction photos show Mud Dabber II's BIG fuel tank being fitted and plumbed.  The soft plastic of the tank cannot be glued so, to hold it in place, it is surrounded by some strategically-placed blocks of soft foam (which grip and keep it from shifting)...then the whole thing is boxed-in by balsa blocks. 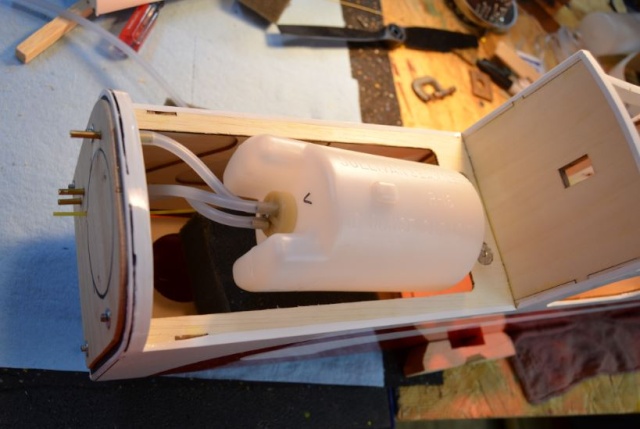 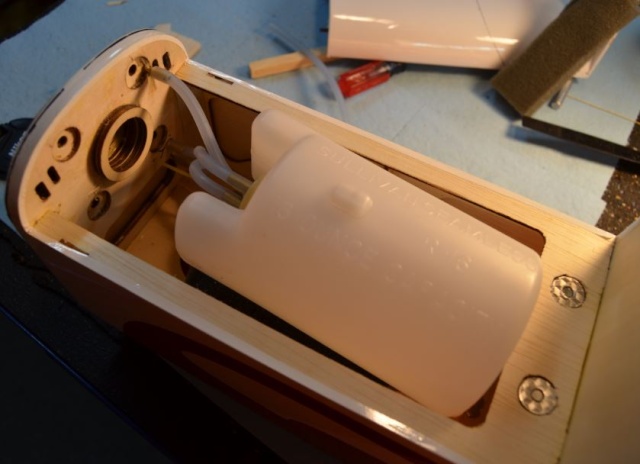 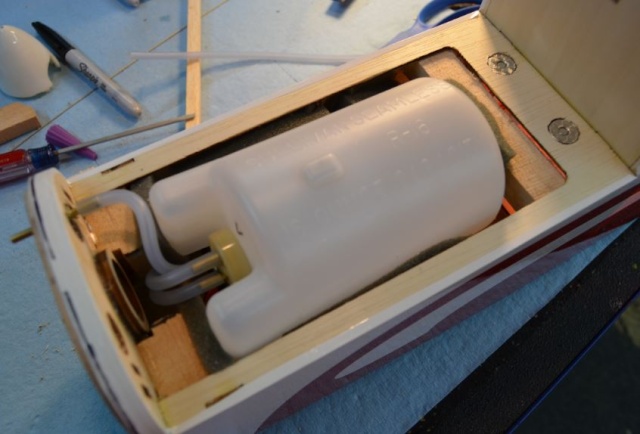 With fuel-powered airplanes, I don't like removable hatches in the area around the nose, as the engine slobbers castor oil the whole time it's running, and this stuff ALWAYS seems to find a way in around the best seal.  If it gets to the balsa wood inside, it takes off, down through the grain, and can weaken the carefully glued parts downstream...the model airplane version of cancer.

So, I try to get everything carefully put together and seal the front end permanently. 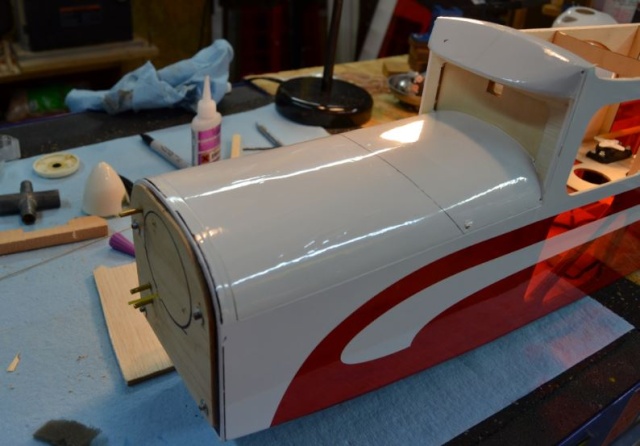 One more step toward getting Mud Dabber II up and running !!!

Kim, are you planning on fuel proofing the nose/tank bay?

Maybe...gonna trowel some epoxy in a couple places on the inside before I totally lock it up. Once the exterior is sealed, stuff inside usually stays oil-free. I like to over-drill the holes for the engine mount screws, fill them will slow epoxy, then drill them out again. Probably sounds goofy, and the oil DOES eventually get in there, but it serves to quiet my compulsions a bit...

Well, it took a year, a month and some change, but Mud Dabber II now has it's First Flight logged.

I only have taxi photos at this point, since I wasn't gonna fiddle with any airborne cameras on it's first trip out.  It'll get a Go Pro loaded on it's next flight.

The thing would probably fly just fine on a healthy .40, but I want to tow banners and flags with it at some point, and need a few more ponies up front.  A pleasant surprise with the O.S. was that it starts VERY easily with a hand-flip at a little over 1/4 throttle.

The recent snows have flattened the grass in the cow pasture next door, so that would be the ticket.
I drove it around the front yard for a while...around and sometime INTO the ruts I carved this past winter.  Then refueled, I drove it out through the cattle gates and into the pasture.

The wind was rapidly picking up, so I turned it that way and blasted off.  The Kadet Senior Sport DID literally leap into the sky when I opened up it's O.S. 61FX.  Just like all the great, flat-bottomed-airfoil trainers, it levitated up and out, with just a bit of aileron trim, and a dash of UP elevator trim.

I always make the first flight on these a 4-5 minute affair, landing it and checking for any stuff that might be loosening up.  So, after some circuits up high, and a few somewhat risky low passes, I brought it around into the wind, and pulled the power back down.

The Kadet drifted down to landing with a bit of power left on in case the wind swirled it, and I had to shut down rather than drive it home because the wind was now dangerous to the big floater.

It's a big dog for one guy to pack around a breeze, but I got it back in the Skunk Works without dinging it up.

It's ready to go again...just need me some calmer air. 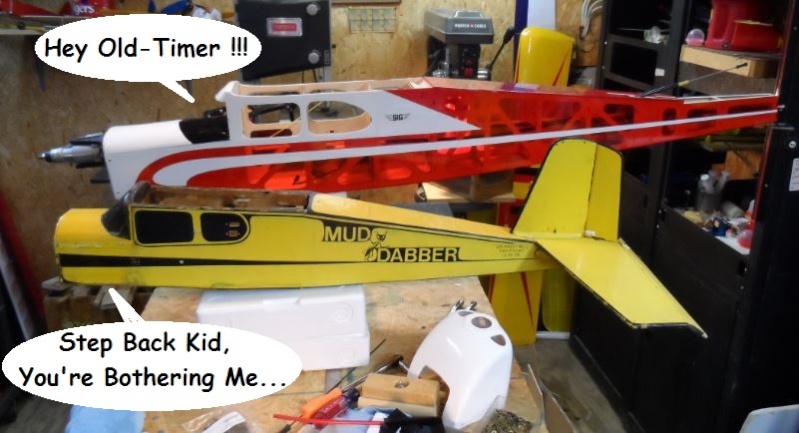 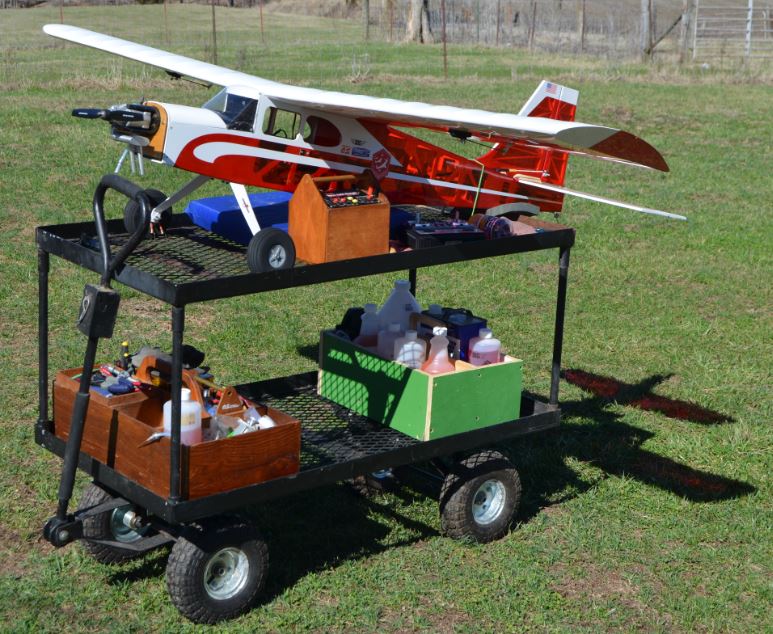 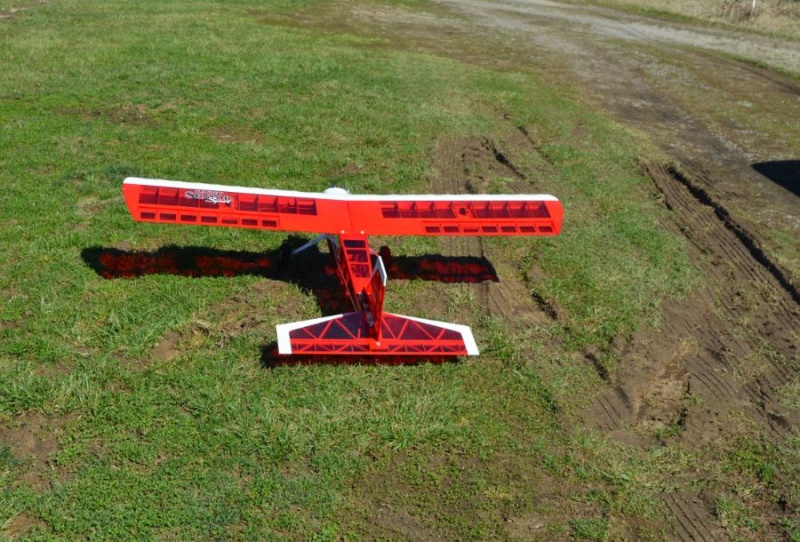 Great Job, Kim! I haven't fooled with a Kadet since I helped a friend build his and learn to fly in the early 90's. Thought about one every now and then. Maybe someday.

Can't wait for the video. And a year and change ain't so long for a build, either.

batjac wrote:And a year and change ain't so long for a build, either.

Hence the shame...it's an ARF kit!  A guy with his stuff going SHOULD be able to have it airborne in a few days!

I DID change some stuff to suit myself, but most of the time, it was just shoved in the backspace 'till my mood tumblers lined up.

Back in my Model-Airplane-Evangelist-Instructor days, my preaching of the virtues of adapting trainers as working airplanes fell mostly on the deaf ears of guys who couldn't wait to bore holes in the sky.

So, Mud Dabber I flew it's close circuits, crazy-short landings and take-offs, dragged it's flags and banners around, did a fund raiser for United Way, and dropped an occasional flour bomb or egg from altitude...greatly hiking the excitement factor out on the ramp.

Hopefully, I'll be pulling some more of that silly stuff... 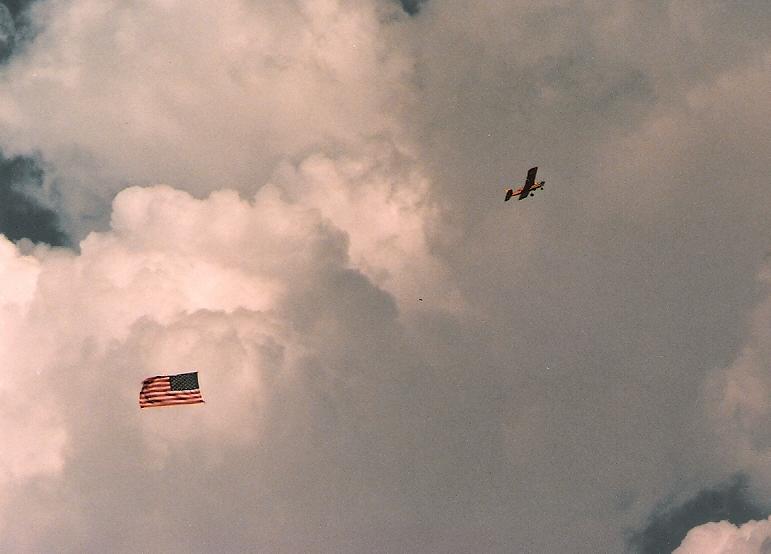 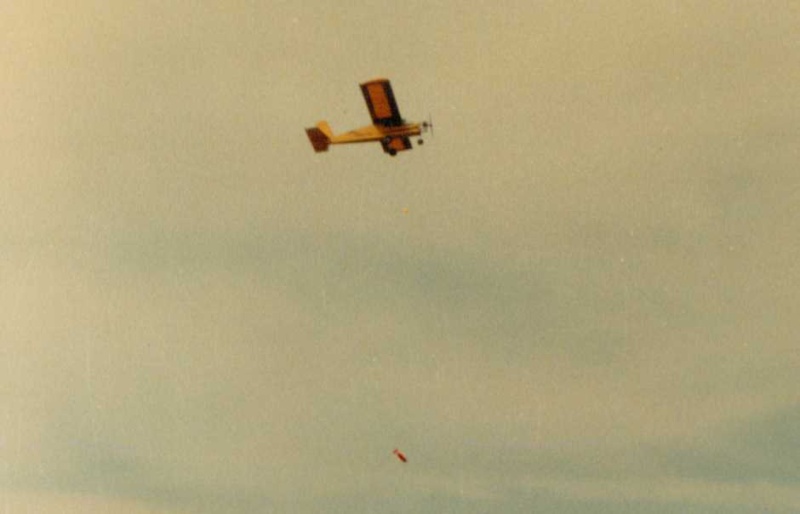 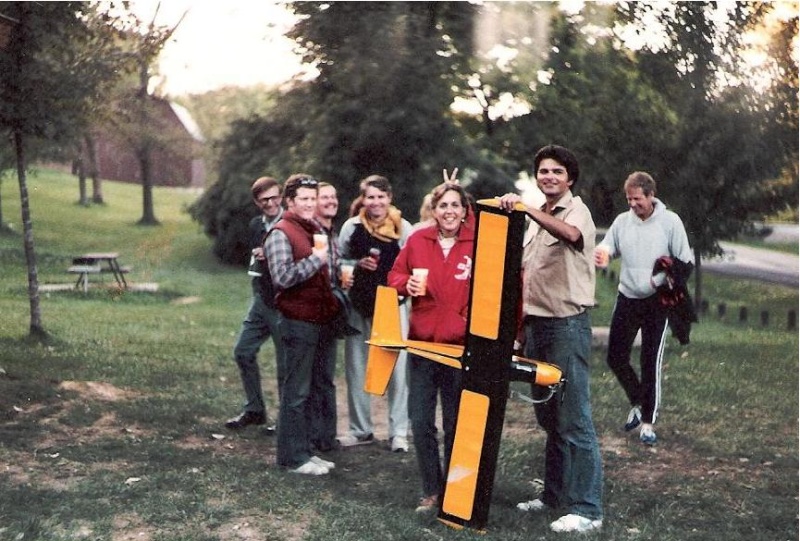 Back to the Future Kim

Sometimes long lapses make the maiden that much sweeter!

On a side note you really rocked those baggy jeans with your jet black hair and vintage nike shoes.

Cribbs74 wrote:Sometimes long lapses make the maiden that much sweeter!

On a side note you really rocked those baggy jeans with your jet black hair and vintage nike shoes.

Thanks...but somehow the baggyness has moved around over the decades...'course the babes are ALWAYS drawn to a dude who doesn't hesitate to slice himself open starting his toy airplane...buy a glove dummy !!! 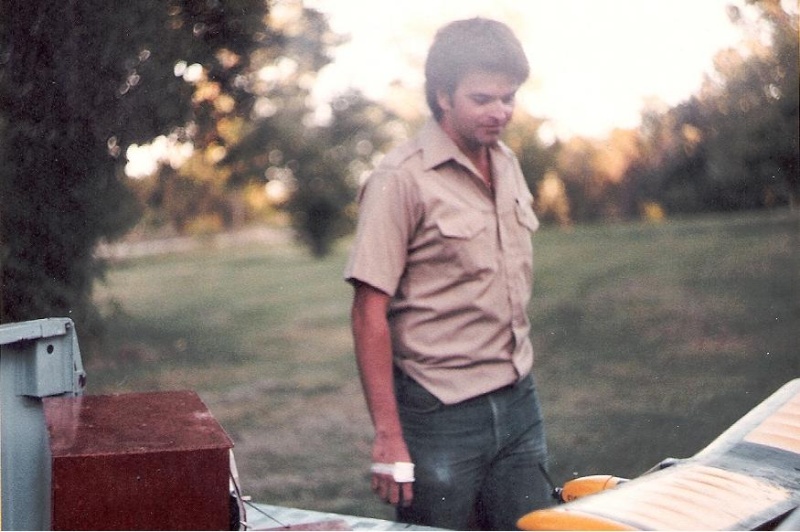 Nice Looken Bird , man she's a big one but I am sure that OS don't care , Looking forward to the vids. Eric

It's beautiful. I had a plane crush on a green Kadet I saw in a picture and talked for about a year about building a small version. I don't know why, just to look at I guess, and let someone else fly it. Someone who actually knows how to fly an RC plane. I have about 4 minutes of non crash time on a squishy foam mid-engine trainer.

Great looking plane Kim, gotta love the Kadets, should be a great platform for all you projects. 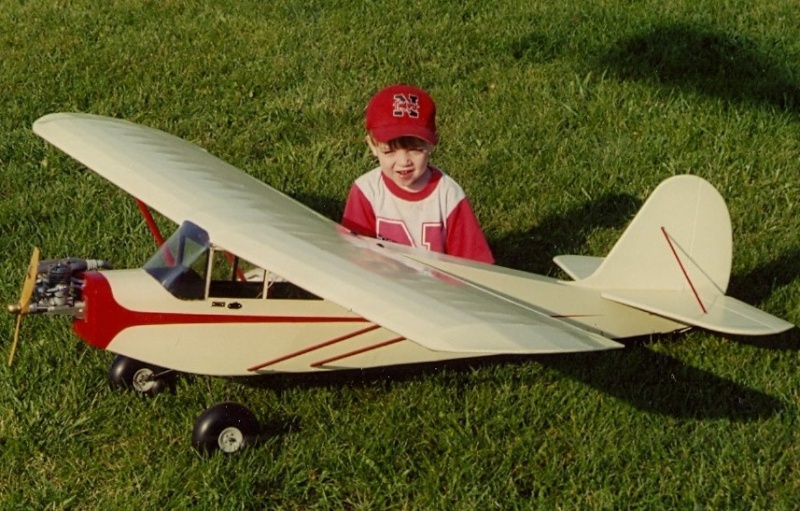 kit bashed kadet sr. or a DIY using a kit for parts? 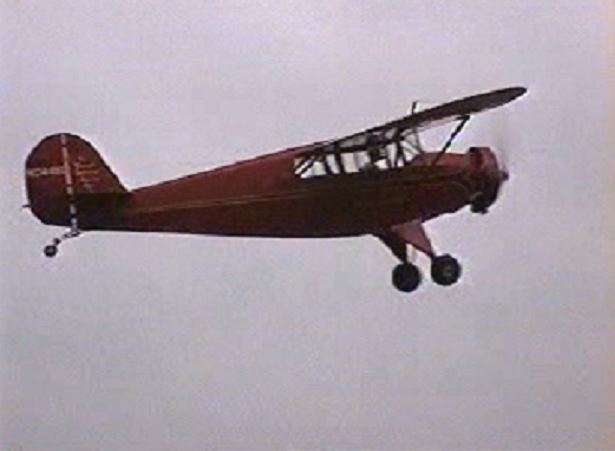 Got the big Kadet out again, making it's first take-off from the front yard.

Performance with the .61FX could be called 'spritely', but I got to fiddle with the O.S. some, as it's idle is still a little off...maybe needs a new glowplug.  My parts inventory has been revolving around Cox engines for so long that the bigger stuff has been neglected...so it's back to Tailwinds for some stuff.

I didn't want to mess with a rotating mount for the Go Pro this time, so it just got scotch-taped to the Sport's wingtip.  I'll be editing a video once I get a little more footage.

The honorary pilot on this flight was 'Little Louise'...one of Tailwinds R/C's Celebrity Aviators.

Had a beautiful evening with just a light breeze out of the north. 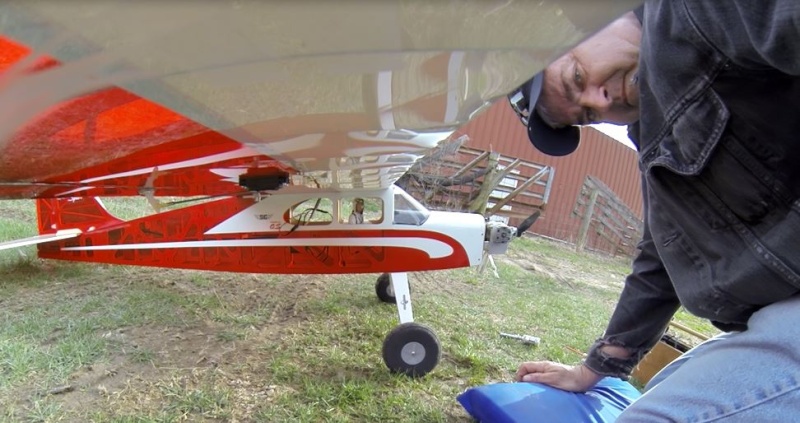 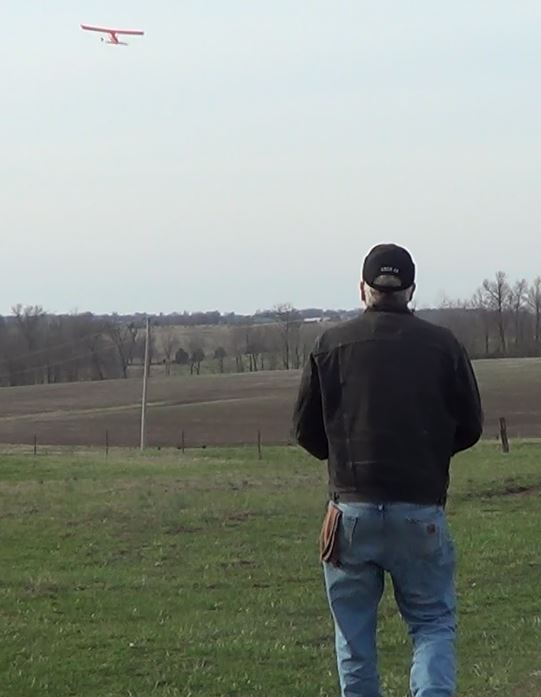 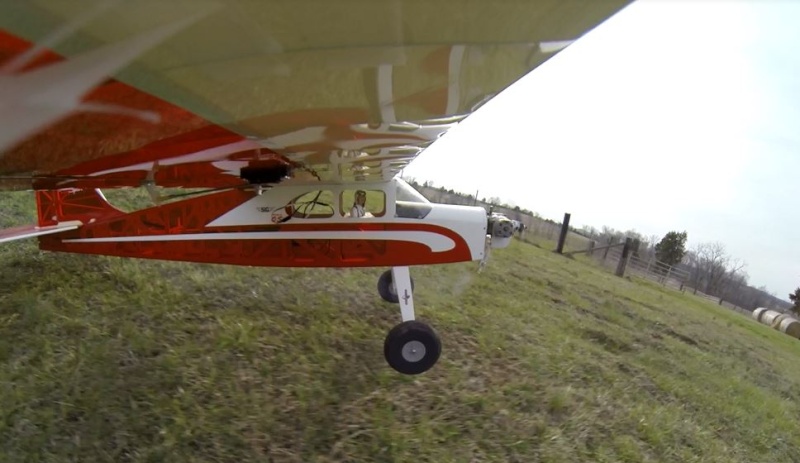 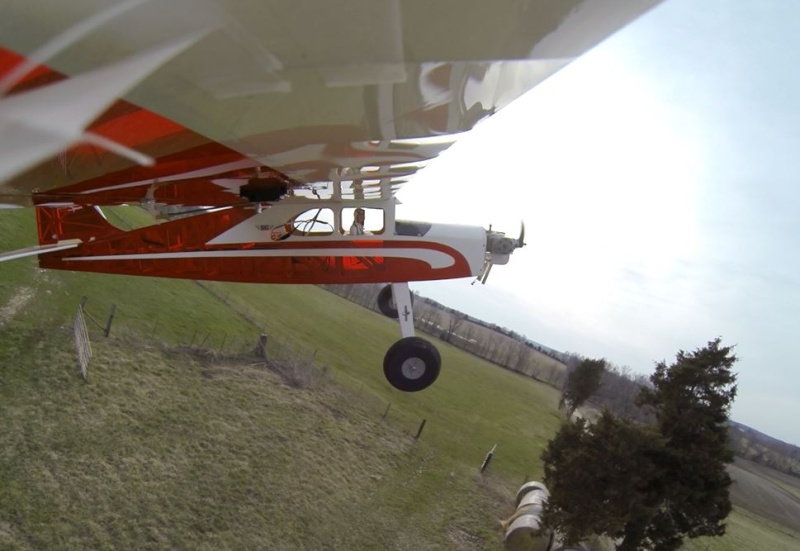 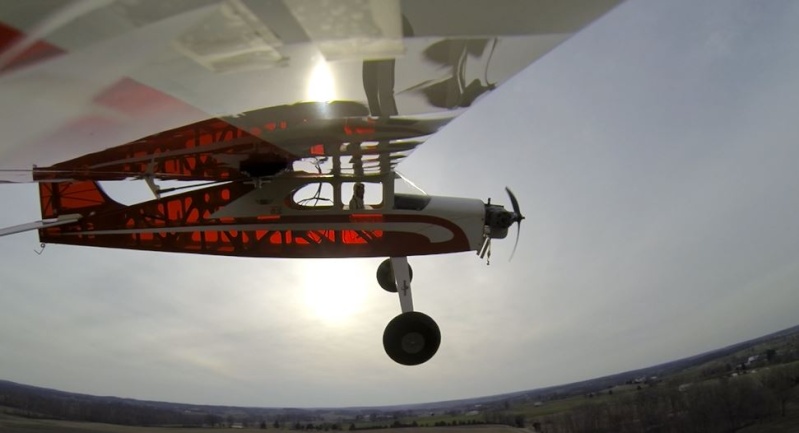 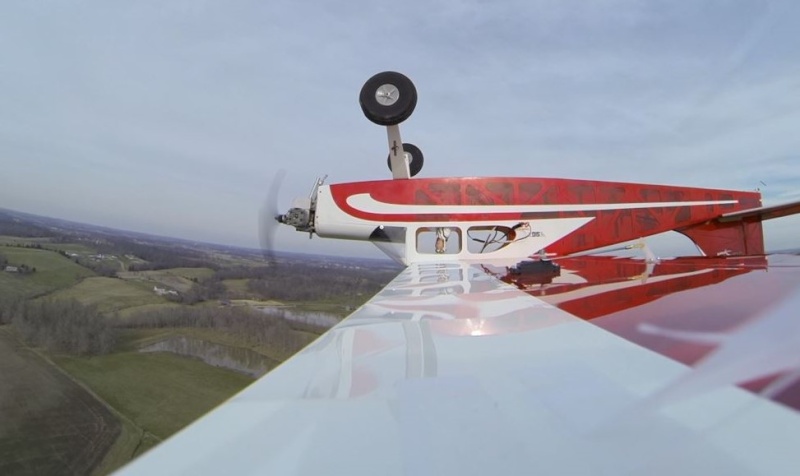 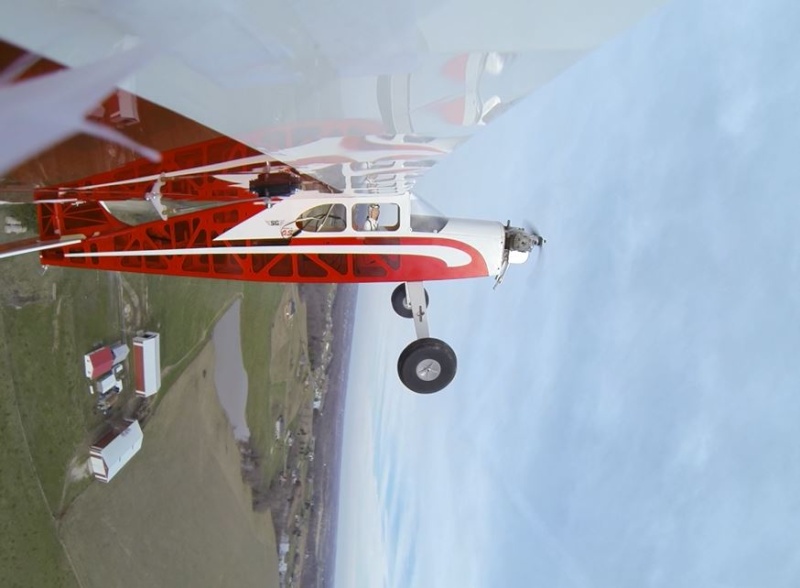 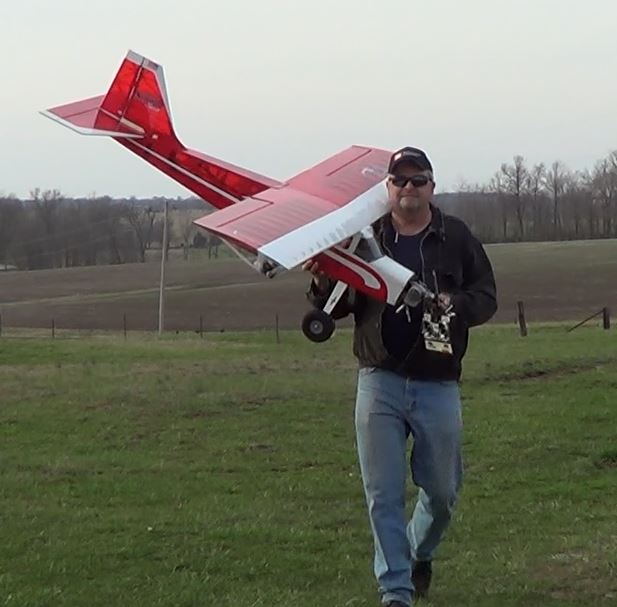 Finally put together a video of various flights of the Kadet Senior Sport from the past weeks.

Excellent power on takeoff Kim! It really gets up there in a hurry. Looks like some covering needs attention, great video as always. How do you know where the camera faces?

Just mows right through that giant clump of grass at the end.

The 6 inch tire looks proper on it with how you have it set up. I would not have realized it as anything else if you hadn't said so.

Cribbs74 wrote:Excellent power on takeoff Kim! It really gets up there in a hurry. Looks like some covering needs attention, great video as always. How do you know where the camera faces?

Thanks Ron, hopefully all that power will get used to pull banners and flags around the sky before too long. Luckily, the O.S. is really good-natured about being started with the throttle just barely cracked, and is running better each time out.

On a lot of flights, the camera is just scotch-taped to the airframe, but with the servo-mounted cameras, I cycle them before take-off and just try to remember once the thing is airborne.

Great videos Kim Thanks for taking the time to put it together and share with us .

The power is right on !