» Pitts -Skelton Aerobatic model
by MauricioB Today at 11:42 am

» Jim Walker's Interceptor Plan
by getback Yesterday at 9:39 am

getback wrote:my Best run for today    my God some one left the window open there at first

Another advantage to this mount.. is that the clearance between the venturi and the firewall is such, that you can "choke" the engine by using a strip of wide rubber-band. Slip it between the mounts and "stretch it thin" to slip between the intake and the firewall. when released, it will expand "thicker".. and seal the intake. Flip the prop while watching for fuel in the line.. then stretch the rubber-band again, to remove it.

Such it is , I have not feeler gaged it but looks like .020 to me ?? I still want to try and learn the bladder did find some plastic hemi-stats that i didn't even know I had

. I would still like to have one of those large syringes.......Roddie did Mike or Kim report in to U?? Eric

Oldenginerod wrote:Just managed to score one of these original Goldberg engine mount kits, including a fuel bladder. 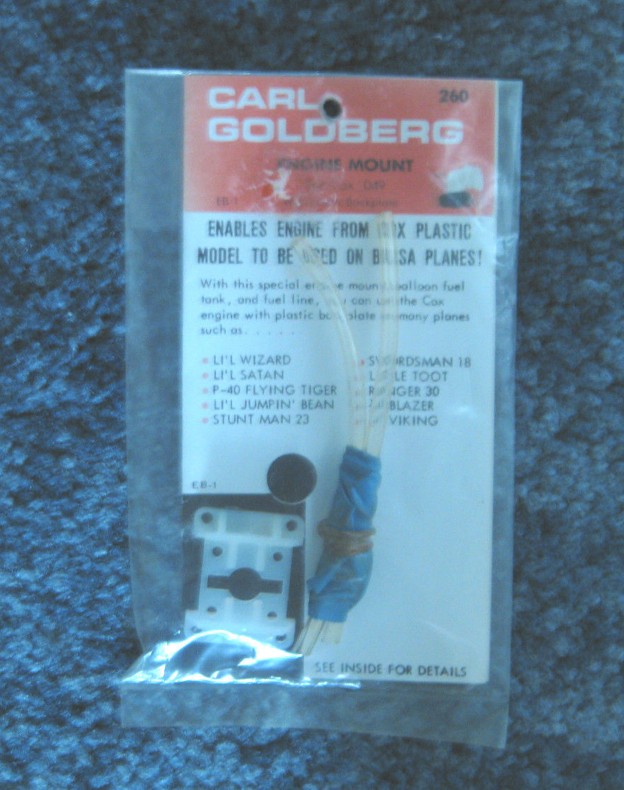 I guess after all this time the balloon mighty be perished, but I'm keen to be able to utilise one of my "postage stamp" engines without messing around making up mounts.  Problem is the postage cost more than the kit (& probably more that what I paid on average for the engines).

That's a COOL find Rod! Now you'll at least be able to mount and run those engines!

Goldberg mount arrived today.  If anyone's interested, the seller has listed another the same.
http://www.ebay.com/itm/151395997050

25- +- to the US man that's hi in my book when u have good friends willing to help just to see there product on a airplane and will that works for -O- Thanks again Roddie!!!  Eric

getback wrote:25- +- to the US man that's hi in my book when u have good friends willing to help just to see there product on a airplane and will that works for -O- Thanks again Roddie!!!  Eric

Your welcome Eric! It was a real treat to see the vid of you "running" yours!!! You asked if I'd heard back from "Mike and Kim". Mike didn't have a postage-stamp back-plate yet.. so I didn't send him a set of mounts. I sent them to you, Mark McRiley (batjac) and Kim. Mark PM'd me that he got his. I haven't heard from Kim yet.. but I know he was looking forward to trying a set on one his "famous" birds... Time will tell...

Just need to get some stuff behind me so I can build something?!?!?!! Wee will see if there is enough space in there once it gets wound up

Some useful info on my custom mounts. 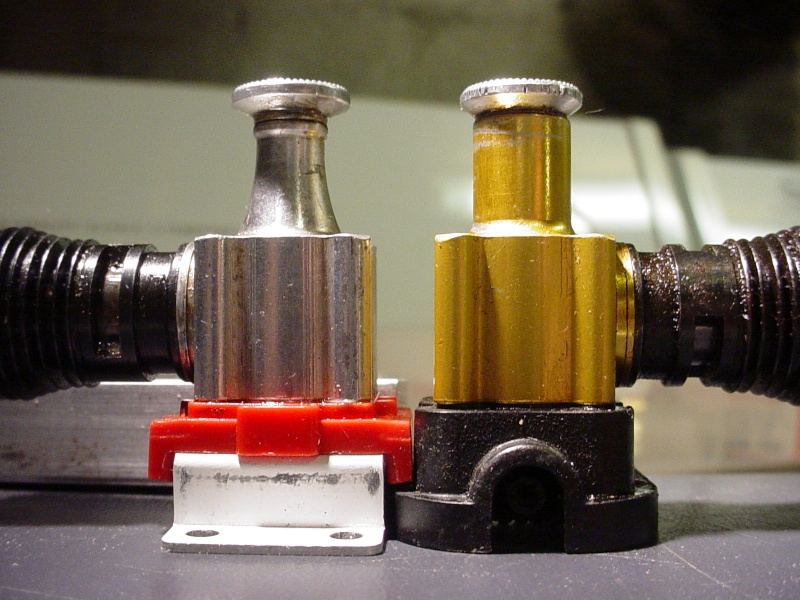 I'm glad I made a handful of these.. because I no longer have access to the router machine/CAD program I used to make them.

I'm using this postage-stamp mount on my "Phred's Phault" 50% scale version of a VooDoo, and using a balloon belly-tank.

Eric (Getback) recently informed me of a failure in one of the mounts I sent to him. He had run his engine on the bench and also flew it on one of his airplanes. The aluminum separated/cracked on one of the 90 degree bends, which he noticed while swapping-out the engine with another. I really hope that this is an isolated incident.. otherwise the aluminum might not be able to take the stresses of engine vibration at the bend points. The mounts shown on the "290 Special" plan at the beginning of this thread, are made of sheet-steel.. by comparison.

I sent out a few sets to people here.. and will replace any that have broken. Just send me a PM. 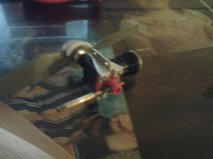 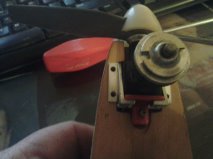 
This is how we did it a long time ago, hope it helps.

On forming aluminum the aircraft materials 2024-T3 ,6061-T6 , 7075-T7 all need to be formed with a specific minimum inside radius or they will all crack. 5052-H32 and the lesser materials should form on a sharp inside radius.

Hey schiada96, welcome to the forum. Didn't see
you sneak in.
That mount is a thing of beauty. The idea of beam
mounting a Cox reedy has always facinated me, and
I'm a big fan of the 290 engine with it's 128tpi needle assy.
Thanks for sharing that.
Bob

Yes I Like that too , never seen it done that way ! Good idea , Thanks , Eric

I had sent Eric (getback) a set of the mounts I made a while back.. and one of them broke. I'm making-up a new set for him. Actually.. I'm making two sets using different bending-methods and will identify them with etchings.

Here's a photo of two different bending jigs in a vise. 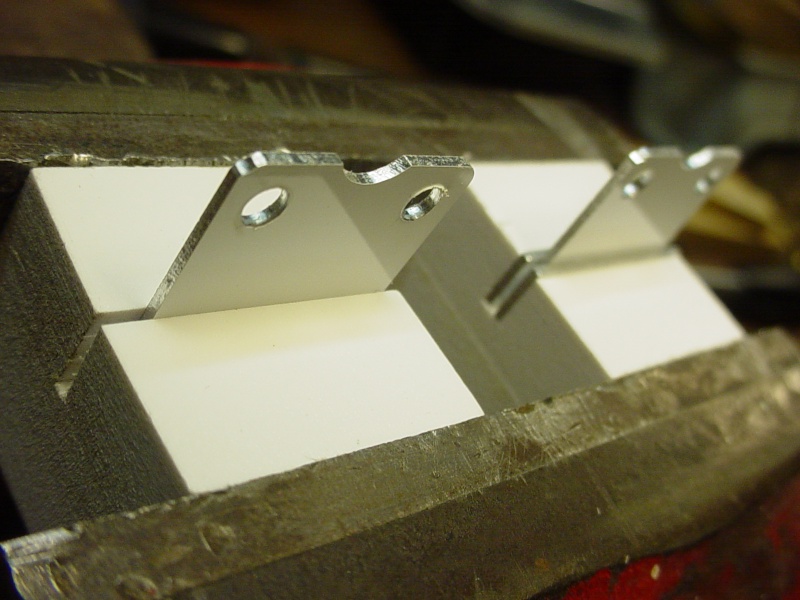 The blocks are PVC.. and I had previously experienced deformation on the design without the padded-slot, when making the 90-degree bends. 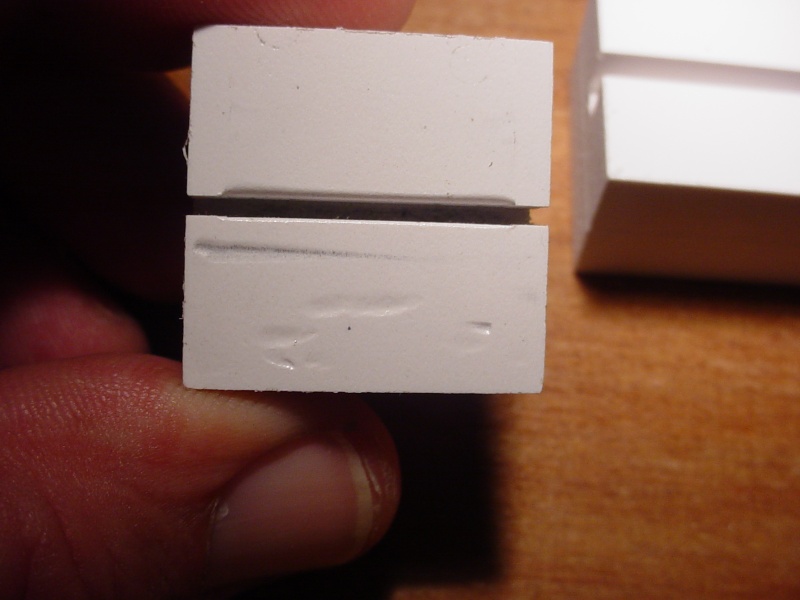 The "padded" block uses the same aluminum for the pads as the material to be bent. This forms a much sharper corner. 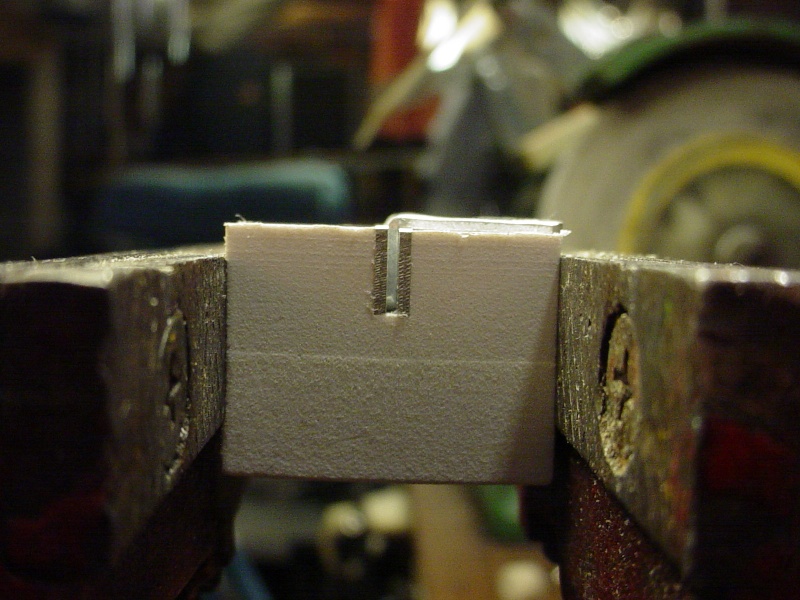 I don't know if forming the sharper corner may have caused the failure. More test-running may prove that theory. The mounts that I previously sent were formed with the sharp-cornered bends. It may have just been a "fluke".. but I'd like Eric to give them another try. 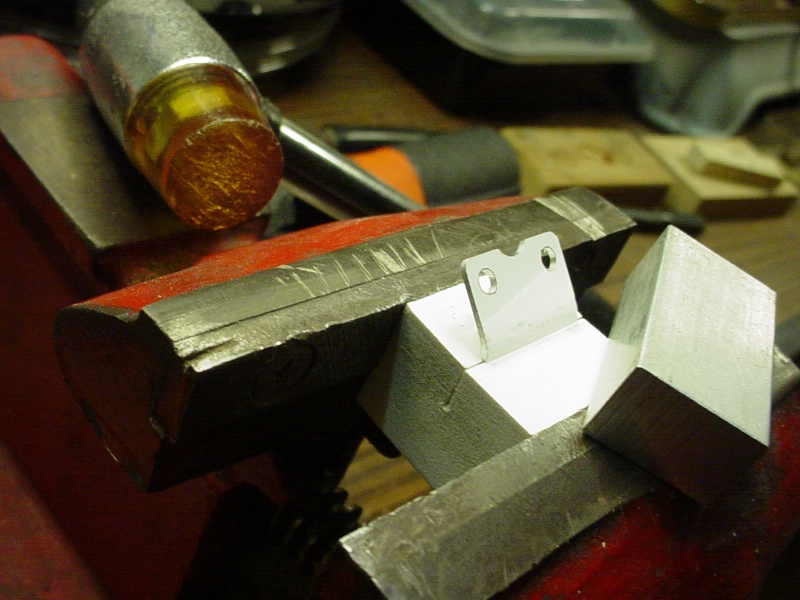 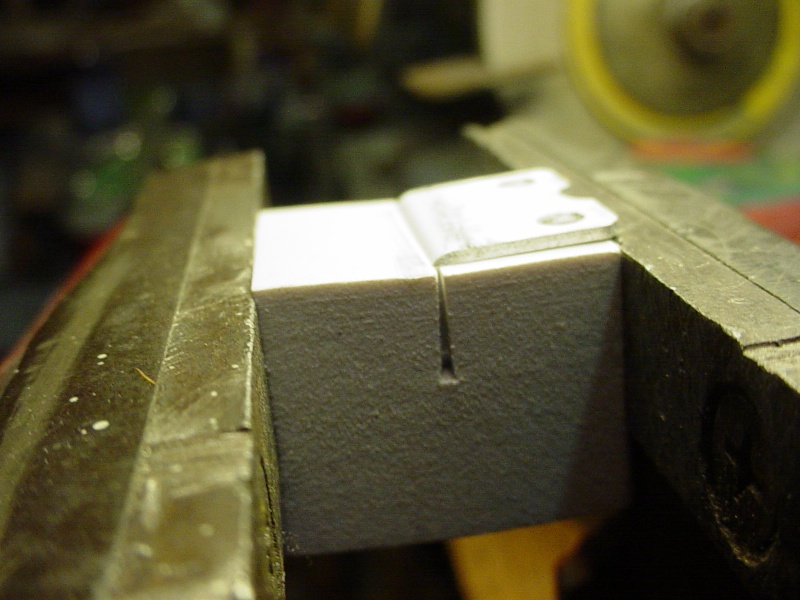 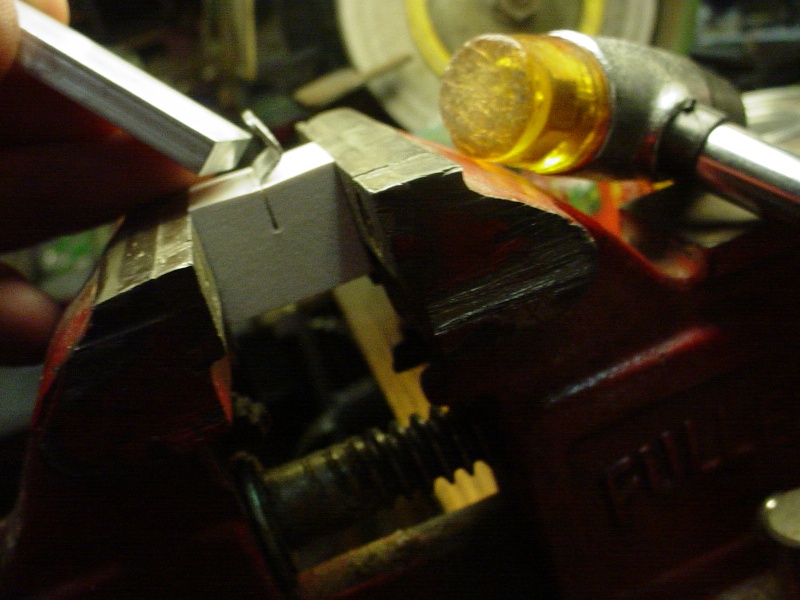 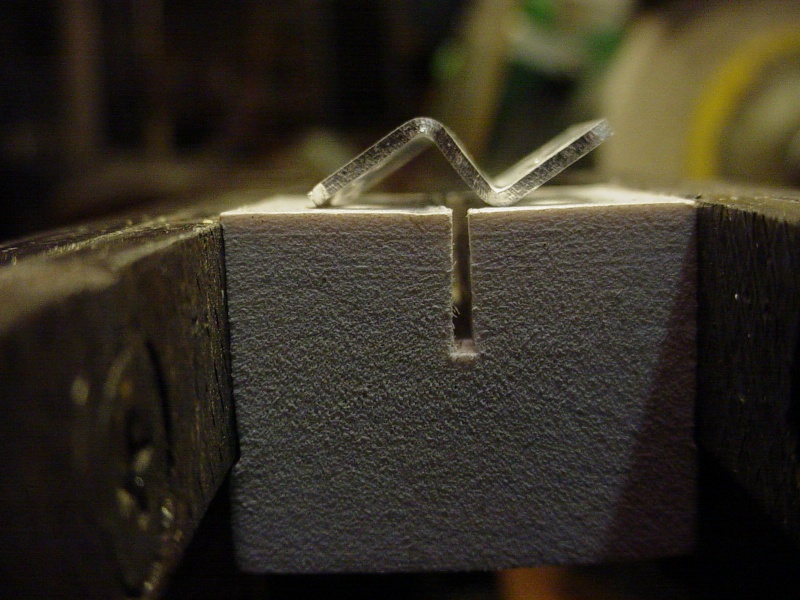 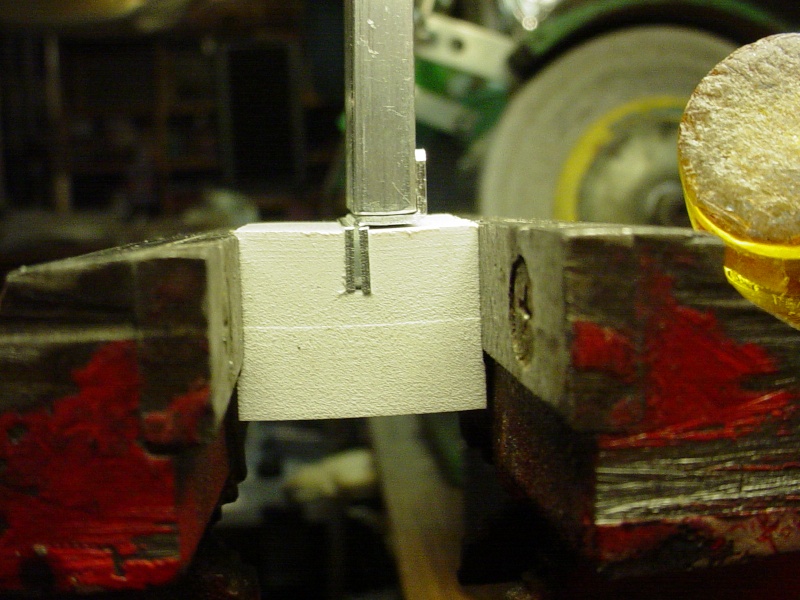 I etched the pairs; "B" for blunt-corner and "S" for sharp-corner. Note the slight difference in size between the two sets. 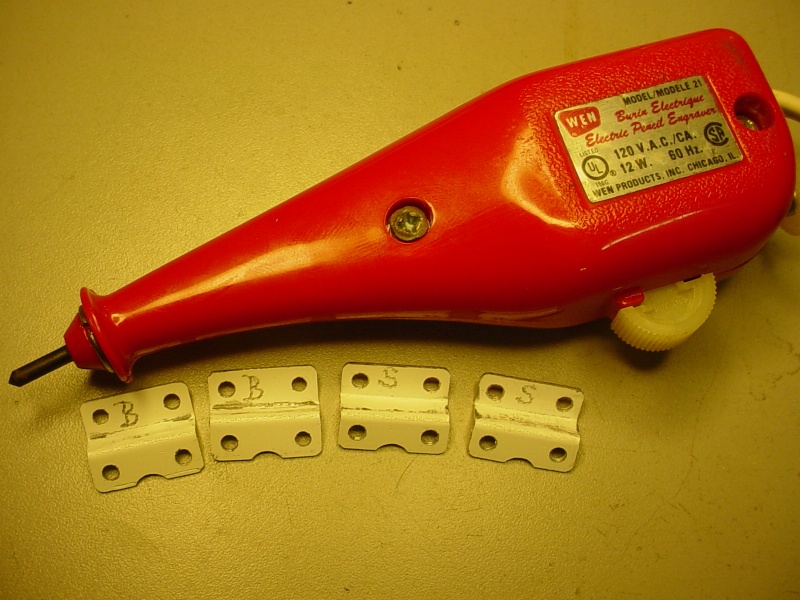 Bending aluminium can be fraught but a lot depends on the alloy and how the sheet was produced.

With some sheets there is a definate "grain", for want of a better word, depending on how it was rolled. I have several sheets that bend easier one way than the other.

The best way to bend is perpendicular to the grain, so the grain lines cross the bend. Sounds strange - if I was using a sheet of aluminium to form a cylinder I would roll it with the grain as with would - but for a sharp bend this would produce stress and so I would form the bend across the grain.

The other thing to be wary of is the radius of the bend. For most aluminum sheet, the inside radius of the bend should at least be equal to the sheet thickness. If the alloy is higher strength and/or heat treated, the radius goes up to double the thickness (or more). Bending along the grain makes these radii even more important.

For sharpish bends I anneal the aluminimum - not pretty - rub a bar of soap on it and heat till the soap turns brown then let it cool slowly.

Sharp corners will contribute to fatigue failure but it does depend on the alloy itself to a large extent. Increasing the radius of the bend will reduce the stress and the larger the radius the less stress.

These mounts look wonderful but I would try and increase the radius a little more. Annealing helps but the finished result doesn't look as nice as the raw material.

Roddie I will bee more than happy to test the mounts out , I think test stand for a few runs and go from there I will report of coarse . I wonder if Stainless Steel would work better I have a lot of this in 316 - 10 gage and the weight cant be off much considering the size ? If you can / would please send a blank that is ready to bend , I want to see what I can come up with and do some weight comparing. It may be to thick but that is what I have . Thank You for your efforts and work toward this project

I will get a engine ready in the mean time . Eric