» What Were They Thinking to Remove Cylinder
by Surfer_kris Today at 3:07 pm

» Jim Walker's Interceptor Plan
by DanMc Today at 10:10 am

» Pitts -Skelton Aerobatic model
by MauricioB Yesterday at 11:45 am

I need to be careful not to get started on a new collection, but it doesn't look like a bad deal so far.

I love the sleek lines of this model. It would be fun to build a stand-off scale 1/2A profile.. (reed speed???) version with a Tee Dee. As far as the plastic models go (both Testors and Cox) a hotter engine would make it a lot more fun to fly.

I would think that Kim should be able to get more than 11K rpm's out of the engine in his 1968 model. Is that pretty much the upper-limit for a stock Testors' rotary-valve .049? I wonder how that engine would run with an APC racing prop.. and upping the nitro to 35%? Maybe it would grenade..

or maybe it would bring the performance closer to that of a Cox Medallion .049?

There was a previous comment about swapping-in a Tee Dee cylinder to the Cox prod. engine.. and if you're gonna go that far.. how about a Killer-Bee backplate? That combo would probably suck the little stock fuel tank dry in less than a minute!

Gee look.. the color matches too.. 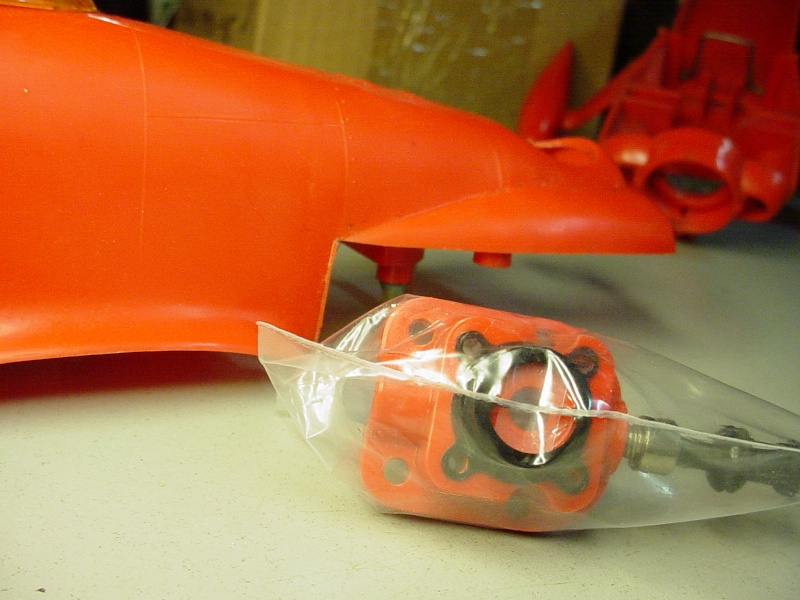 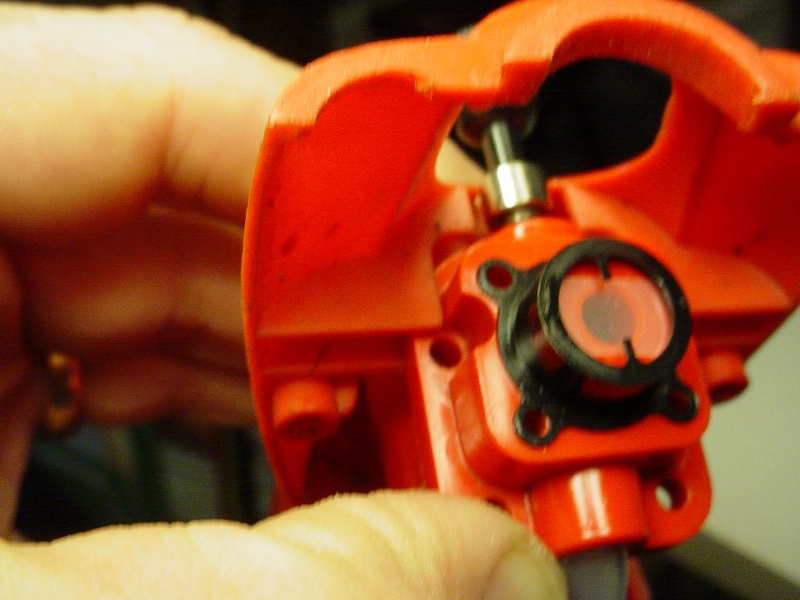 RknRusty wrote:That is so... cool, funny and sad. Thanks.
Rusty

Those were my exact feelings....so cool,....so funny and then sad. Your right, I thought mine would be a rocket! I had saved up all those "proof of purchase" coupons off the Sprite pop six packs, sent them in, and received the all white version of the testors sprite airplane. uHg what a dog. The engine, less the heavy nut and bolt, got installed into a "Big Otto" which is still hanging in the rafters. Flew much better with balsa and chrome monocoat! Thanks for the videos Kim. 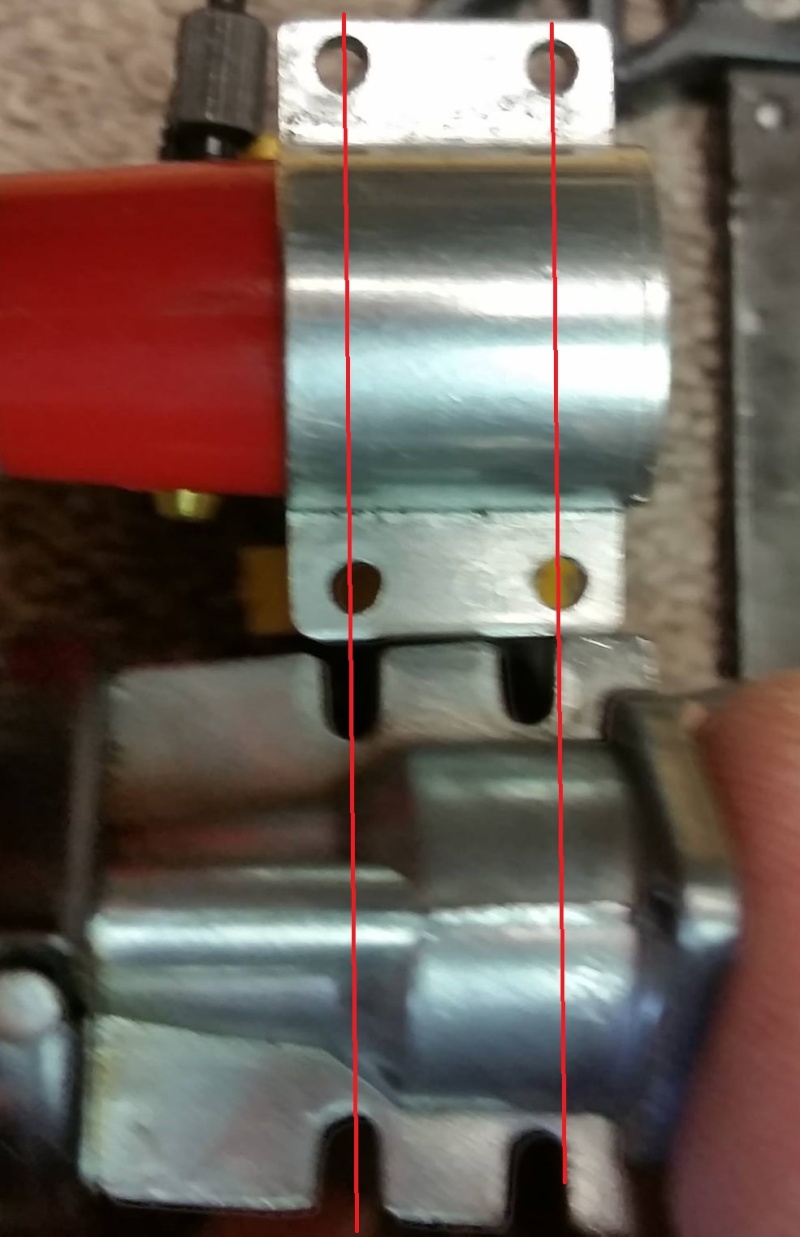 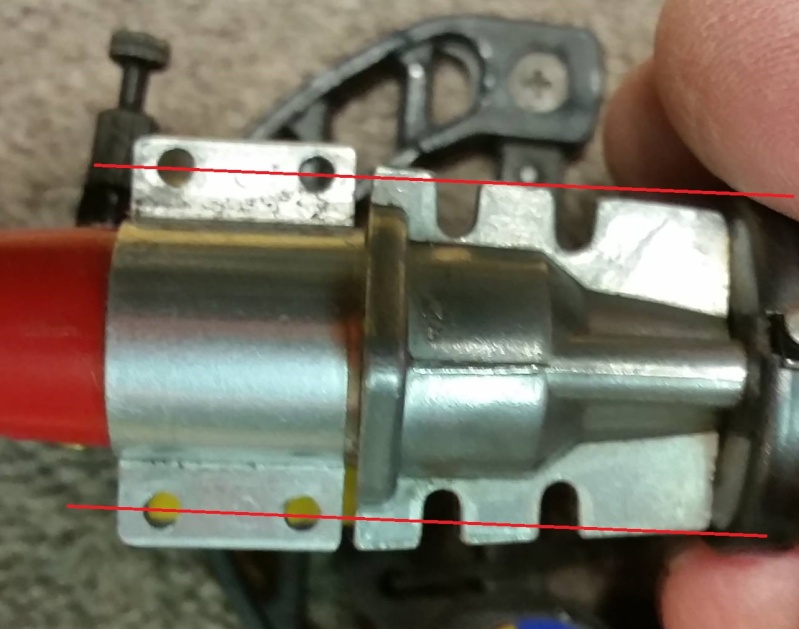 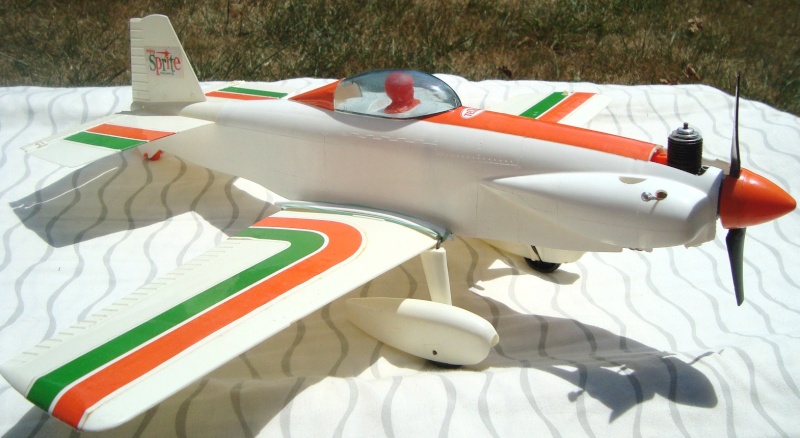 Mark, thanks for the picture of my memory!!  She does look good just sitting there.

Yep, I remember those when they were new, staring at them at kmart while my parents shopped, thought they were cool.

Thanks for the mount comparison Mark.

roddie wrote:For sale in the "land down under".. 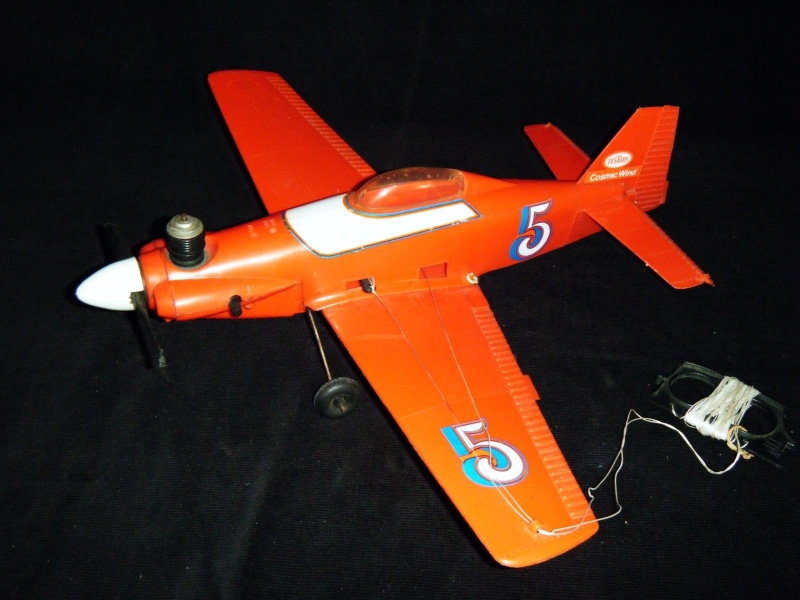 I think this is a smaller version like the one that Cox produced. It states 1976 production-series 4910.. and has a reed-valve engine, rather than the older one (like Kim's) with the rotary-valve engine.

YES FINALY A CL PLANE ON EBAY FROM OZ!

but i missed it

Here's a one-year bump. A recent thread discussed Testors props.. and some having tabs/knobs at the root/hub for attaching the spinner. The prop in the discussion was a 3-blade.. but my "Cox" Cosmic Wind came with two 2-blade props having tabs to hold its spinner. My spinner looks different than Kim's though..

The props (a 5 x 2 and 5 x 4) have no Cox-markings. Could they be leftover Testors stock that Cox used on their version? Did the Testors model ever come with alternate props? 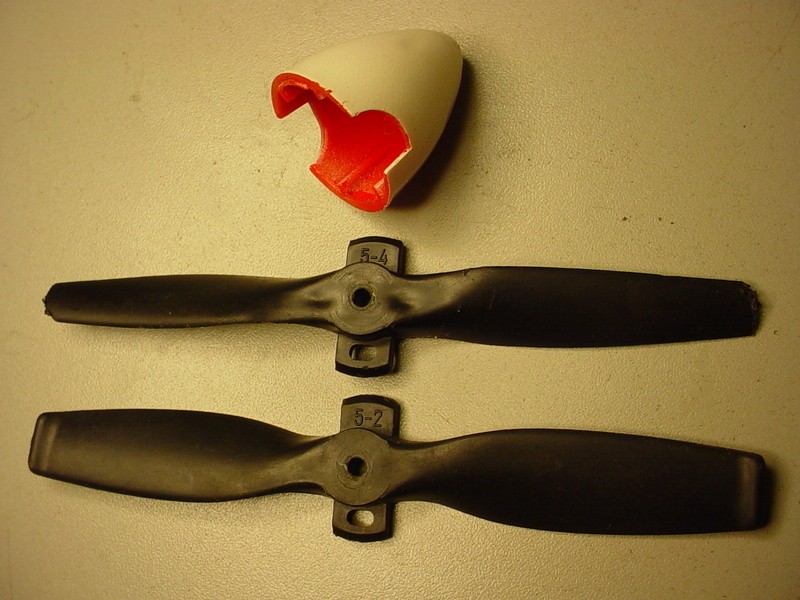 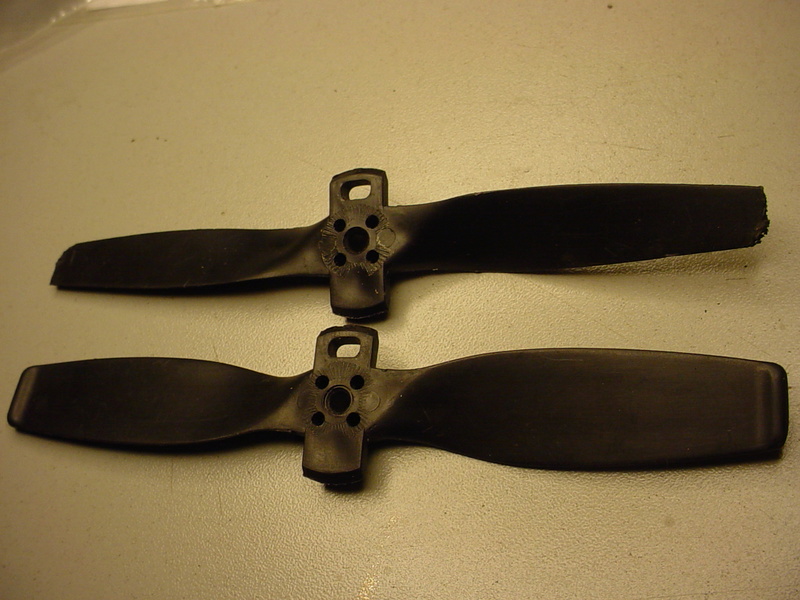 The 5 x 4 is pretty roached. It's the only one I ever ran on the Cosmic wind. I used that prop/spinner on the Rare Bear for the first CEF Speed Contest. I'd bought three APC 4.75 x 4's.. but didn't end-up using them for the flight-trials. 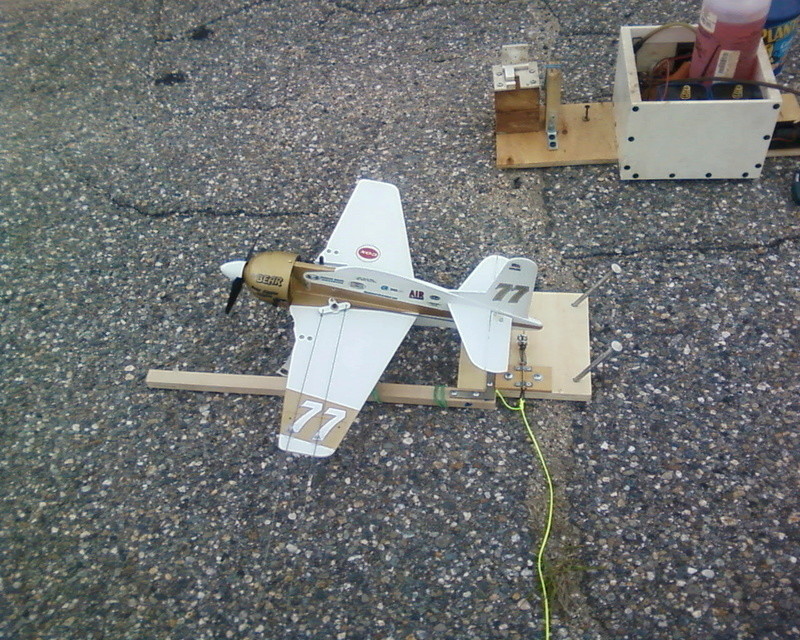 I wanted to use that spinner..

but it got cracked when the engine backfired and threw-the-prop on the tarmac. It was a temperamental engine to start. When I did manage to start it, I experienced prop-strikes coming out of the launch-stooge every time. The stooge is 1/2" plywood.. and the tail-gear length/angle compounded the issue. 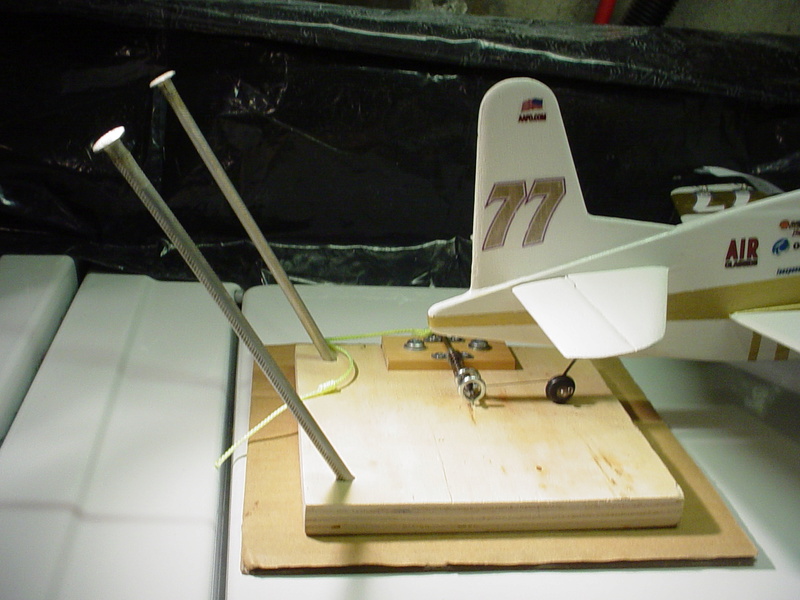 The model was tail-high coming out of the gate.. and never taxied more than 3-4 ft. before the prop-strikes occurred. Nerve-wracking to say the least. My wife was with me.. but she was the videographer. I also didn't want her down near the running model without safety-glasses. I may put larger diameter wheels on the model. I have the same style in 1/2" larger diameter. It's a R.O.G. model.... like all the ones I've flown. I'll make it work. I love that part..

not sure why.. but real airplanes roll before they take flight. I'll mess with the APC props more too. I was literally down to the wire on the Speed Contest. I should have experimented with engine-compression.. but didn't know what I've learned recently. It was also my 1st experience with a Tee Dee ported cylinder. I ran a stock low-compression glow-head with a single gasket on Sig Champion 25. I was getting higher rpm out of that engine.. than any of my other reedies.. never tach'd it.. but didn't need to. It freakin' screamed on the bench.. once I got the fuel flowing from a hard-tank. I actually stood-back. Tough starting though..

There's a myriad of variables there. The integrity of my glow-driver.. suspect-freshness of the fuel.. (don't be a fuel-collector.. like me).. but it must have been ok.. to achieve a handful of screaming bench-runs. My issue is in the expectation of a reliable suction-feed.. running a coarse needle in that backplate. I thought that increasing the ID of the fuel-line was the answer. Too much air was breathing through that Killer-Bee backplate. A small fuel-line was more resistant to flow I thought. Swapping to a larger line was the only way to get the engine to run past an exhaust-prime. It worked though.. on bench-runs.. Now there's the ability of the tank to supply a steady amount of fuel during the flight. Can't really test that in the air.. until your first flight. I now have high-compression glow-heads.. so I could experiment there. I'd like to rule-out the fuel-freshness variable. Maybe it's not too late to ask Santa for a quart..

It would be tempting to install the Rare Bear engine in my Cox Cosmic Wind.. and try to fly it. The Killer-Bee back-end (horseshoe backplate) will slip right in. That would have been an interesting marketing-approach for Cox. The Cosmic Wind.. A "Racing-Model" for experienced fliers. That's really what it was meant to be.

In the early seventies Testors made a 'hop up' kit for the Fly'em series, which included 2- 3 blade props, one for speed the other for stunting, I don't recall a two blade prop.