Log in
Search
Latest topics
» Happy Birthday to me!
by rsv1cox Today at 11:47 am

» Question for the pedantic engine collectors here
by sosam117 Today at 11:18 am

» music vids.. some of your favorites
by GallopingGhostler Today at 8:38 am

» Peoples thoughts and experience with different glues
by Yabby Today at 3:00 am

» Tee Dee .05 RC surging during idle any suggestions on how to fix?
by cmulder Yesterday at 11:36 am

» what airplanes have you built? post your pics of the models and feel free to talk about your airplanes
by getback Yesterday at 6:56 am

I have never owned any other small engines other than Cox or McCoy, so when I saw the WenMac I put a bid on it. I have been wanting to pick up a few older engines other than Cox, and I thought this one would be a good start. I want them for flying, not for collecting. Thought it would be neat to keep some of the old iron.... and aluminum flying.

The WenMac 049 MKII is neat. It's what I wanted from the auction most of all. Getting the others was a bonus. It is in pretty good shape. I'm going to give it a bit of fuel and try to run it today.

This is my first Cox 020 since I was about 10. I need to order a few parts for the 020. Props, props screws and washers. It has screwdriver scrapes on the tank and some dings, but it has good compression and feels smooth when its turned over.

The Cox 049 included in the action was nice because, well, you cant have enough of them right? This one however must have been a barn find. The seller WIRE BRUSHED the entire engine. I have my first "textured" Cox 049. It has compression, so there is some hope! Just can't get the head or cylinder loose yet.

DUDE !!! Melt some plastic around that "Rare Textured Cox Babe Bee" and staple it to a chunk of cardstock !!! 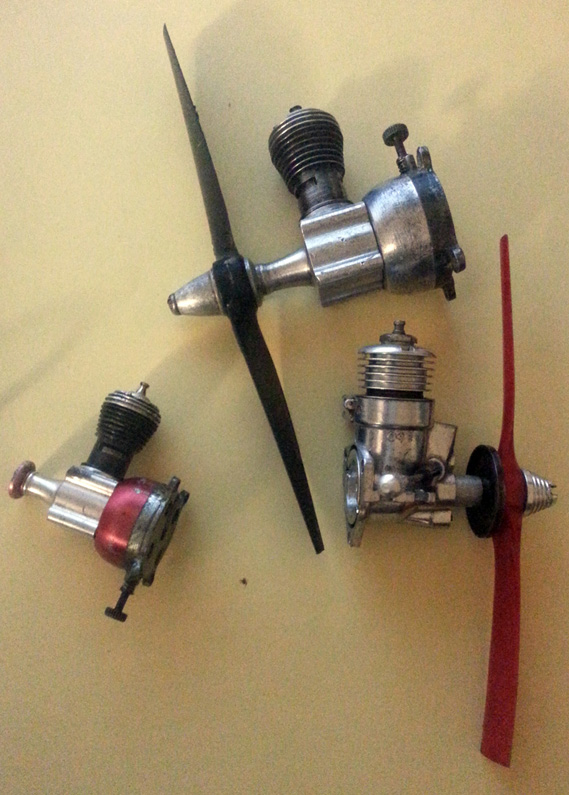 Allen have you soaked the 049 you cant get the hd/cyl. off of ? I suggest hobbies no.9 for a couple hrs. or so ..... get you a piece of heater hose 3/4" ID. and slip it over the cyl. so you can put your I use channel locks on it without damaging the fins , chuck the cnk case up in a vise (lightly) just enough to keep from moveing on you with a rag around it

Works for me ! You can that Rusty were I got the Idea from.

I think you mean Hoppe's no 9, right? Had not thought of using that product.