I found this on ebay last week. Neat little engine shipped with the needle valve installed and poorly packed. But it arrived not broken unlike my recent Holland Hornet experience. I imagine that the flex NV had something to do with it.

It's in very good condition but needs a good soaking in penetrating oil to free it up. Also the fuel line will have to be replaced.

It seems like I have seen the propeller spinner before, but I can't remember where. Were these ever mounted on a commercially available model?

The engine and red cone spinner are off a Wen Mac Turbojet. The earliest I saw the plane was in a 1957 issue of Boy's Life magazine. It was maufactured into the 60's but I don't know exactly how far. 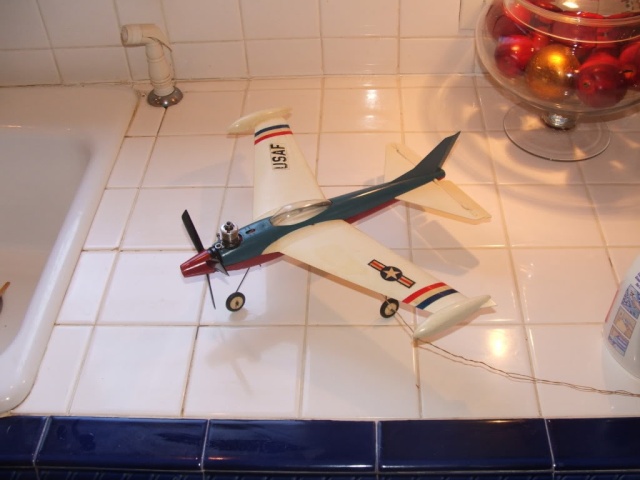 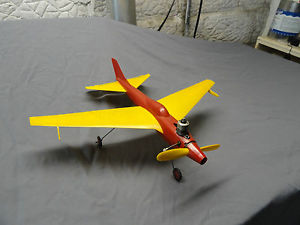 I believe that was the last engine design from Wen Mac. The engine was bought by McCoy mostly for the starter design. Note the similarity: 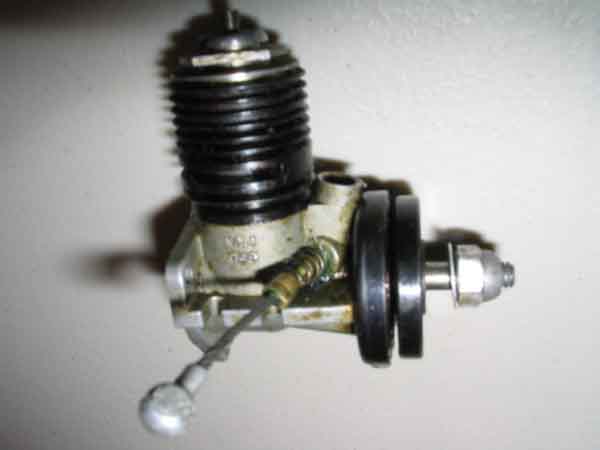 The Wen-Macs are pretty neat, there's about 30 different, slight but different versions. Some where I've got the complete brake down of engines courtesy of "Mr. Wen-Mac" Guy Eves. There is a lot of pics on my 049 Collectors site.
The first Wen-Mac engine was designed by Bill Atwood. In the mid sixties Testors bought Wen-Mac from AMF, Testors also owned McCoy or at least the name. McCoy never made Wen-Macs, only used the name McCoy sometime in the late 60's on the Testors Thunderbolt 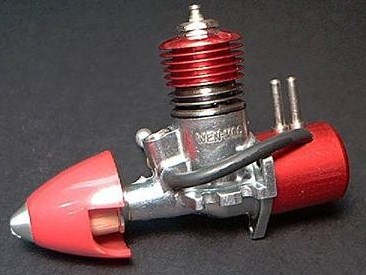 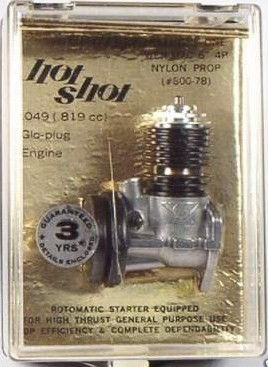 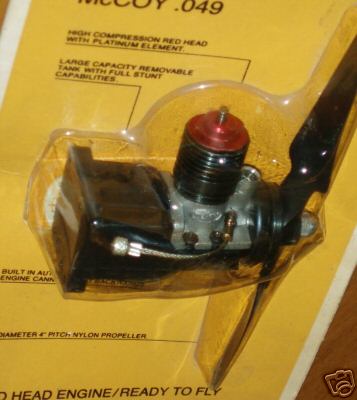 The long spinner was used on a couple different models, but I think Microflite is correct, it's off a later two blade Turbojet. 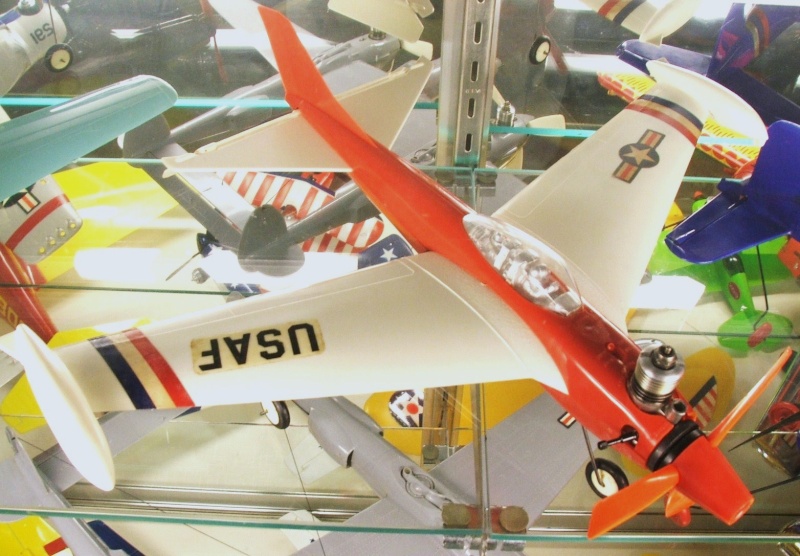 As Mark stated there are many MKs of Wenmacs up to about Mk7 or 8 perhaps, with lots of small differences.

Some had anodized heads in various colors as well as tanks.

I have several of the 1952 Mk1, 1955 MK2 and 1957 MK3, plus a couple of Hotshots as in Marks pic........the Hotshots go particularly well, and fire up instantly using the Rotamatic starter and make good power.
Heads are a problem, as in getting them, but they will run okay on an old head with a plug hole put into it, and tapped for a plug.

The early Wenmacs MK1 and Mk2 as far as I know did not have the Rotomatic starter, but still flick start okay. I think the first Rotomatic was on the MK3s, but even that MK was sold without it as a base lower cost version........Maybe $2.95??????

I have a Powerpoint on the full history of all 27 versions of Wen Mac .049s, pointing out all differences in each of the XIII Marks.  It probably came from Mark's 049 Collectors site, I'm not sure.  I can't figure out how to attach it

so if someone can help out I'll do so.

I've managed to convert the Wen Mac ppt file to a pdf file, but still can't seem to attach that either.  Any clues?  Keep it simple.  I'm challenged when it comes to this stuff.

@Oldenginerod wrote:I've managed to convert the Wen Mac ppt file to a pdf file, but still can't seem to attach that either.  Any clues?  Keep it simple.  I'm challenged when it comes to this stuff.

Me too Rod.  I'm way too old for this stuff.  Copy and paste maybe?

Thanks all for your replys.  I did not know this had a Rotomatic? starter.  I thought it was just the later style back up and let 'er go spring.  What ever was on the end of that string I don't know.  I fished out the bitter end and there was nothing on it.

I wonder how that worked in the real world.  I don't think pulling a string to start 1/4" behind that rotating propeller would be a good idea.

This thing was so gummed up penetrating oil along would not free it, and I don't force things.  I wound up heating Simple green in the microwave and letting it sit for awhile which finally did the job.  Complete tear down, clean and re lube was in order.

BTW, the original black fuel tube was a mess.  When disassembling I found a very small brass eyelet on the tubing.  I believe the tubing just slipped into the tank and the eyelet was at the tank end of the tubing to keep it open???  I saw no indication of brass tubing in the supply opening of the tank.

quote ; I believe the tubing just slipped into the tank and the eyelet was at the tank end of the tubing to keep it open???............what I have seen with eyelets for tubing, would be slip the new fuel hose in the hole then on the other side insert the eyelet to tighten the fit??? this is guessing but some of the weedeaters on the market use this meathead . Eric

Yes, that's the logical way Eric.  But the hole in the eyelet is way to small for tubing to pass through.  The eyelet is so small that it just floates in the hole for the tubing.  All I know it was covered with the black goo of the fuel line and I almost threw it away.  Seen here on a plastic tie so I don't lose it.

It could have something to do with the pull string, but I doubt it.  I believe it was inside the tank when I took it off.

The tubing did extend down to the bottom of the tank when I removed it.

Does anyone have a picture of the pull string end, and how does that work? This one pulls out but does not retract. Probably still a little gummy, but removing these little spring poppers can be a chore.

None of my early ones, MK1 and 2s have a pull cord starter.......I think that may have been an extra dollar if you wanted it.
Seems from my reading up on them some time ago now the pull cord worked okay, but the ham fisted often pulled too hard and pulled the string off.

According to the article I have there were 11 models of the Mk.II.  Still trying to figure out how to attach it.

EDIT:
I reckon it's possibly this model. 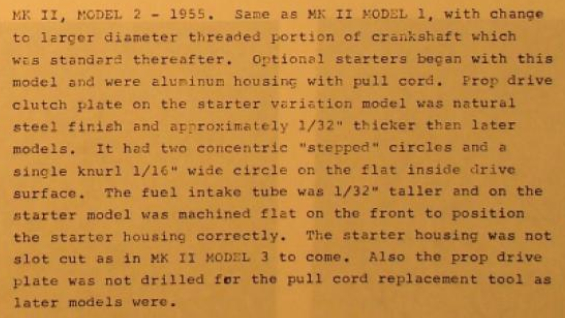 Did you soak the pull-starter assy. along with the other engine parts? There's probably a band-spring inside the housing (like the Cox design) and it could (still) be stuck. If a couple of light-tugs on the string reveals any recoil.. you could try another soak in solvent. A great lubricant for this type of mechanism is graphite.. but only to "free it up". I'm not sure how graphite and glow-fuel react. If the pull-starter still won't recoil, you may be able to dismantle it.. to make repairs. Most band-springs have a "tang" on the inner-coil end. This fit's into a slot on a drum or disc usually.. and is the second-most point of failure.. a broken "string" being the first. If the tang "ears" broke-off the band-spring.. you can file/grind a new tang profile that will lock into the slot as it did originally. A photo of a replacement spring.. or exploded view of the pull-starter; showing the shape of the spring would be helpful. Re-stringing (which you'd want to do) gives you options. Obtain a spec-length of the original cord.. or go "high-tech" with some comparable test braided fishing line. Maybe a shirt-button for a pull-handle would do the trick.. and be safer too; around a spinning prop.

Yep, that was our o'l buddy Warren that made the power point for the 049 Collectors site.

The only anodized color Wen-Mac used was red...Atwoods were red, blue, green and gold.

I'm pretty sure the small brass eyelet was not from the factory, how or who is a mystery. 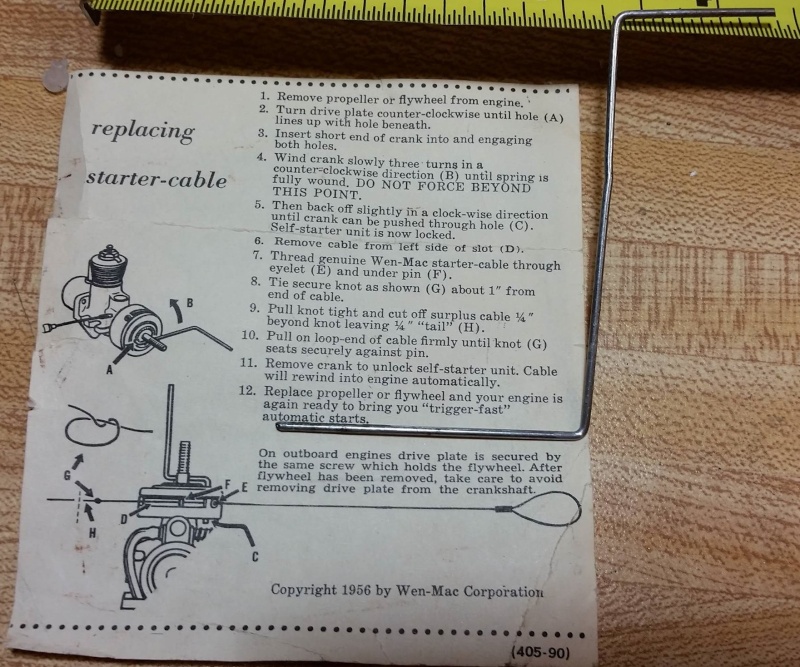 Going on Mark's starter instructions, it looks like your cord is coming out the wrong side- i.e. it's knotted, or anchor, end is sticking out. That probably means the end you pull is tangled up inside.
Rod.

Yes, it is coming out the wrong side from what it was originally, I probably wound the prop the wrong way at one time, I will counter-rotate and see if I can get it back.

Interesting discussion.  I'm mainly a Cox guy but I have accumulated a small group of the Wen-Mac, Tester's, McCoy engines lately and find them fascinating both in design and execution.  And the front rotary valve induction does away with those fussy reeds.

This one is probably quite common but has a triangle and it looks to be marked Wen something??????

This pull string design must be flat coil spring controlled (see picture), but it feels like it ratchets when I pull it.  It does have the hole in the drive washer that is described above.

I’m going to try to remove the drive washer, clean it out and re-string it.  Any idea as to what the pull on the string looked like? Looking more closely at Marks picture of instructions for replacing the string, it looks like just a loop on the end. I can't say that it's an advantage to have that loop flopping around a rotating prop. 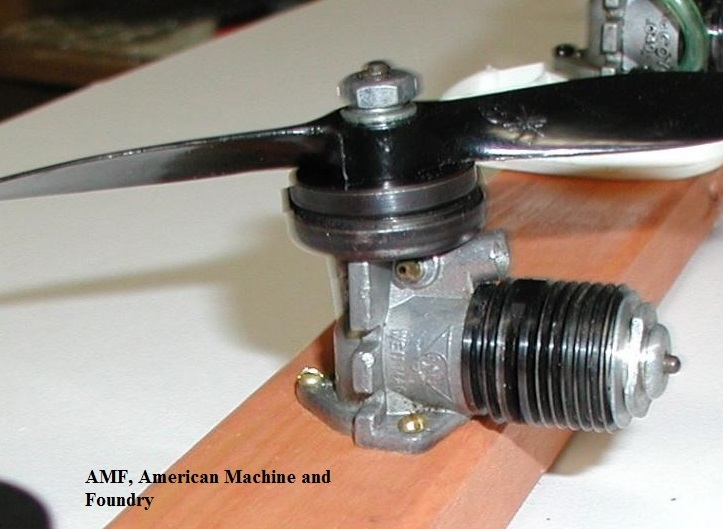 Sound like the AMF engine has a busted spring.

You might try to just tie a loop (square knot, loop appx. size of small ring) using the old cord if you can't find replacement, it will still work but only turn engine over once...or lol, I could get off my butt and dig thru my pile of crap and find the cigar box that's full of Wen-Mac return springs and precut cords, etc.

The original pull cord used small piece of aluminum tubing squeezed together, holding the loop in place. If you make up a winder up from 1/16" music wire you wouldn't need to remove anything.

This is my only Wen Mac. It came in an Aeromite I bought at a yard sale. 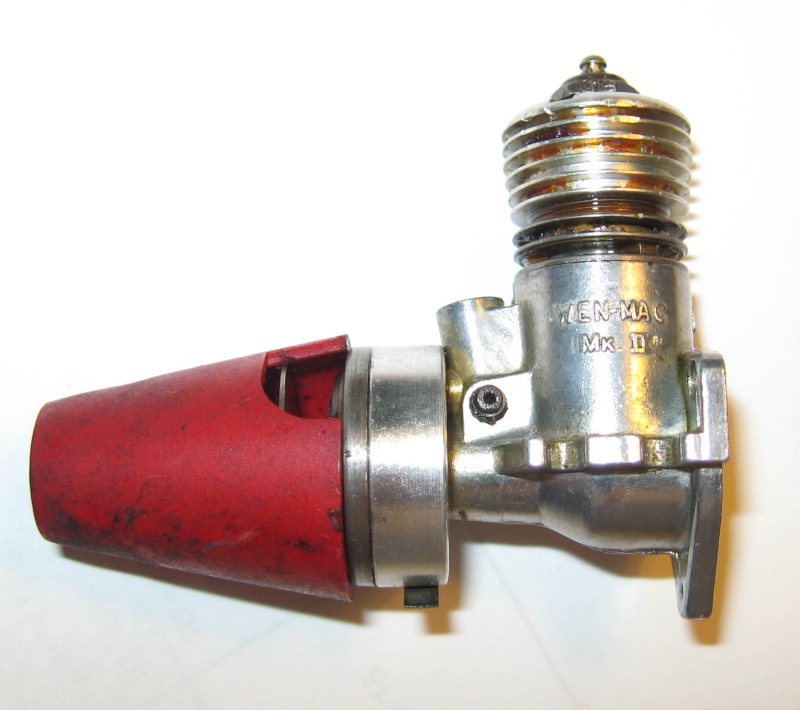 @Mark Boesen wrote:The original pull cord used small piece of aluminum tubing squeezed together, holding the loop in place. If you make up a winder up from 1/16" music wire you wouldn't need to remove anything.

Judging from the photo it almost looks like the string is the original length and the loop pulled loose.

@gcb wrote:This is my only Wen Mac. It came in an Aeromite I bought at a yard sale.

Looks like mine George.  Does the pull string starter work?

Quite possible Mark. There is a knot at the end but it's quite frayed. I'm still wondering about that eyelet. I thought it might go on the end of the string to keep it from being drawn back into the housing, but then how did it get involved with the fuel line..........

The brass eyelet is not from Wen-Mac, I'm pretty sure of that. Look at the repair flyer, the knot is on the crank end, get a small piece of aluminum tubing and make a small loop and squeeze tubing with pliers.

If anybody here knows wenmacbill on NFFS site he can tell you ALL the history of the engines including the various colors etc.

@gossie wrote:If anybody here knows wenmacbill on NFFS site he can tell you ALL the history of the engines including the various colors etc.

If you're referring to Bill Schmidt from Kansas, l've known Bill for a while and learned a lot from him, he's a good guy and I'm sure he'd tell you red was the only color Wen-Mac ever used.
I'm also fortunate to have known Guy Eves aka "Mr. Wen-Mac" I still have Guy's Wen-Mac engine collection as well as parts and info he compiled over the years, some are posted on my 049 Collectors site.

P.S. If you've ever seen Bill's purple headed Wen-Macs, I did those for him.