Got this in the mail the other day oiled it up has some compression / don't fell real strong like the 049s I am more use to ? Looks pretty wild wondering if any one has had any experience with the Gilbert line ? came with an extra glow head and a gummed up tank it was pretty cheap..... 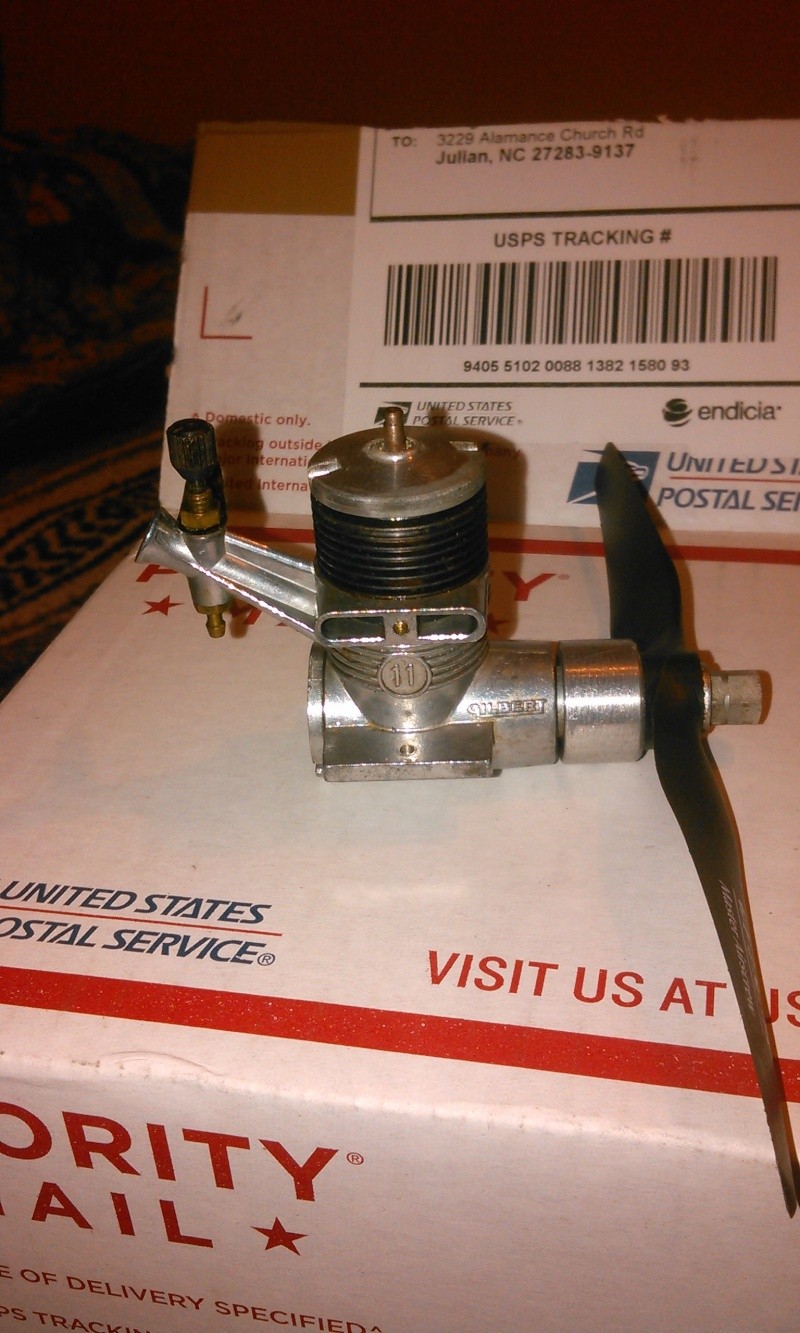 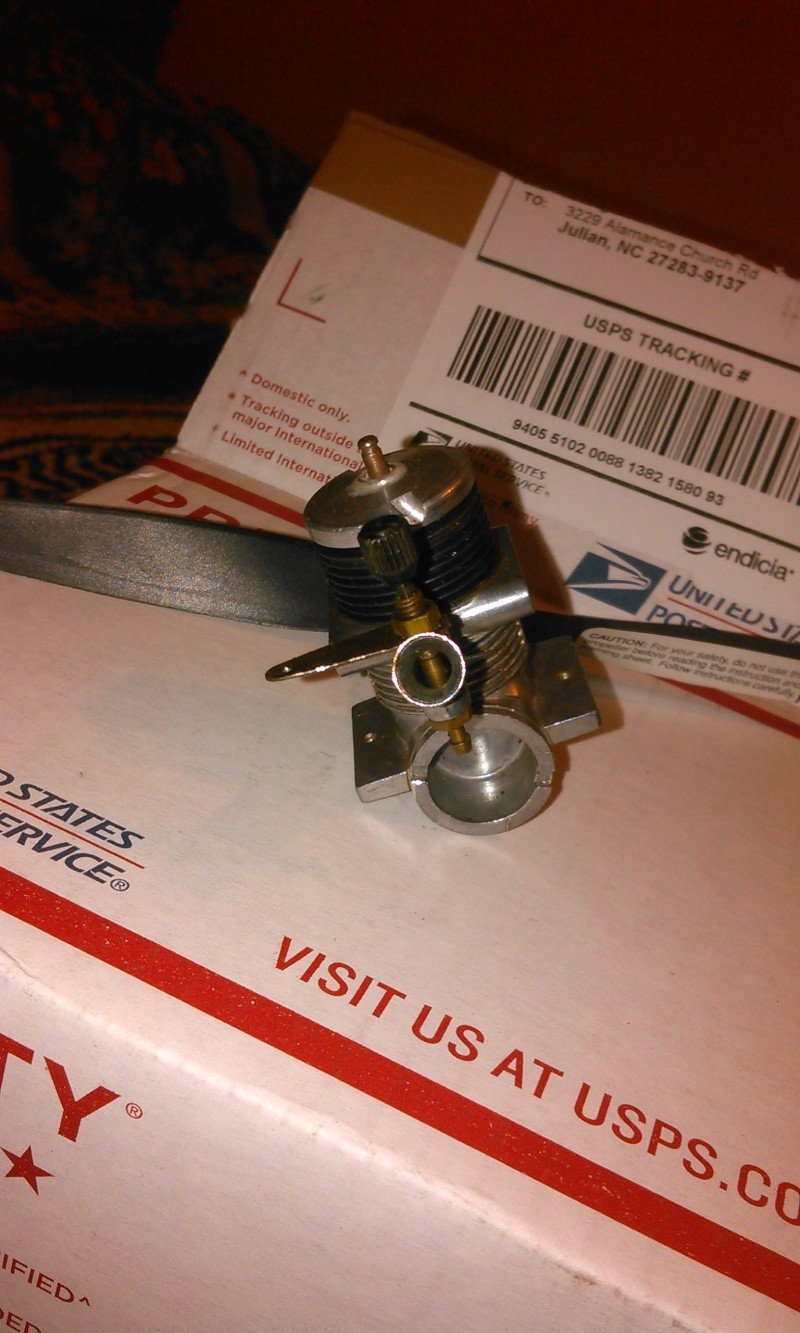 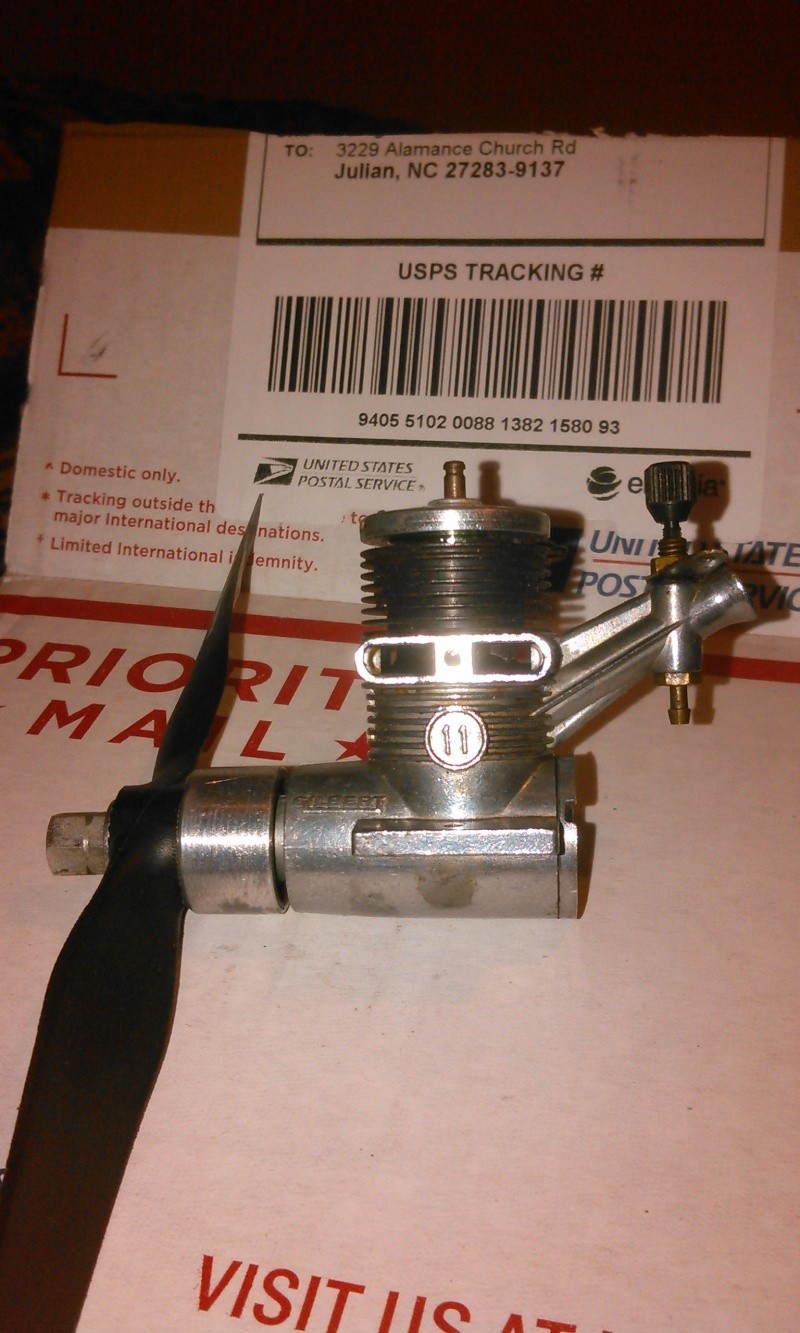 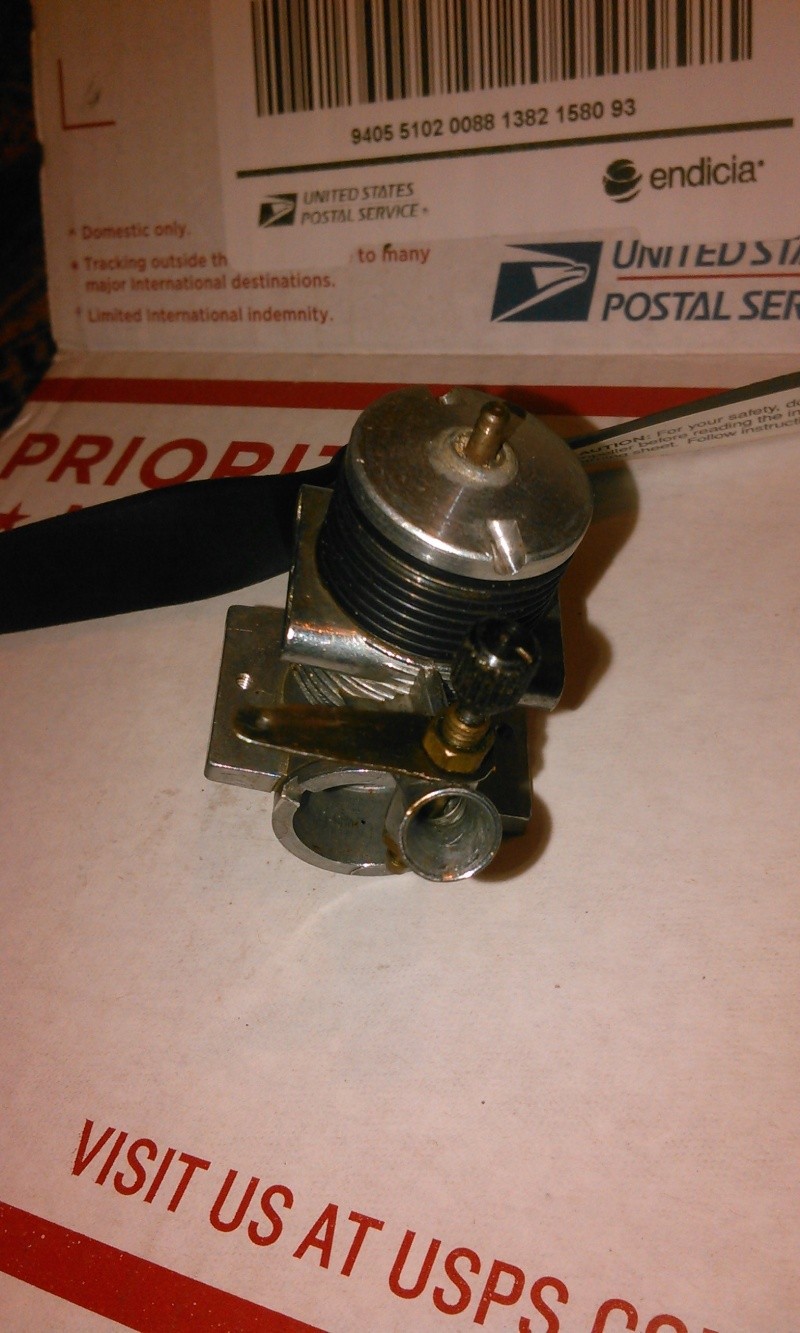 As you have already figured out it doesn't feel like a good .049.

I have not used a Gilbert, but I have a Fox .10 that is Gilbert based.

Eric. They are a fine running and easy to start engine, but don't be fooled by the "11" size. Treat it more like a weak .09 and use about a 7X3 prop. Too much prop and it will bog down, but once you get the right prop they sing pretty well for an old sideport design. Set it up with a low fuel tank as they tend to syphon the fuel down the angled intake if the tank's too high. Compression is usually reasonable on these, but try not to compart it to other engines too much. Head gasket sealing may be an issue. Use high castor fuel and probably around 10%-15% nitro. 25% will be ok as the 11s have a reliable glow head. Heads on the .07 were fragile and should run lower nitro, although high nitro is the only way to get them moving well. The 11 is not so fussy.

I notice that the needle clicker spring is flattened out. It needs to be bent at right angles to engage the grooves in the needle knob.

By the way, simlarities to the Fox has led to many rumours about their origins. Apparently Fox did some of their parts manufacturing at one point, but that's about the only connection, apart from a few shared design features which were fashionable at the time.

Thanks Guys I figured some one out there new something ... Rod thanks for the info on the fuel / castor values... Who ever had this engine at one time looks like they were using the clicker as you said at the adjustment / for a RC throttle ? it has not ever been bent up to that point and moves without a problem back and forth / are u sure it should be bent ? Thanks Eric

While it might swing backwards and forwards like a throttle lever, it's probably just a loose nut on the top of the spray bar.  They were never throttled.  There were several different needle valve variations.  Some had a press in one-piece spray bar, some were 2 piece screw in, and some had a conventional 1 piece held in with a nut.  Early ones had a normal spring under the needle knob & later the flat clicker spring like yours.  There were also 2 different needle threads.  The instructions pictured shows the 2 piece unit, but the clicker spring was the same. 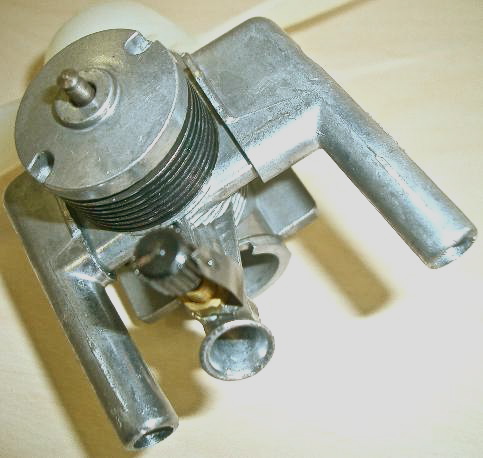 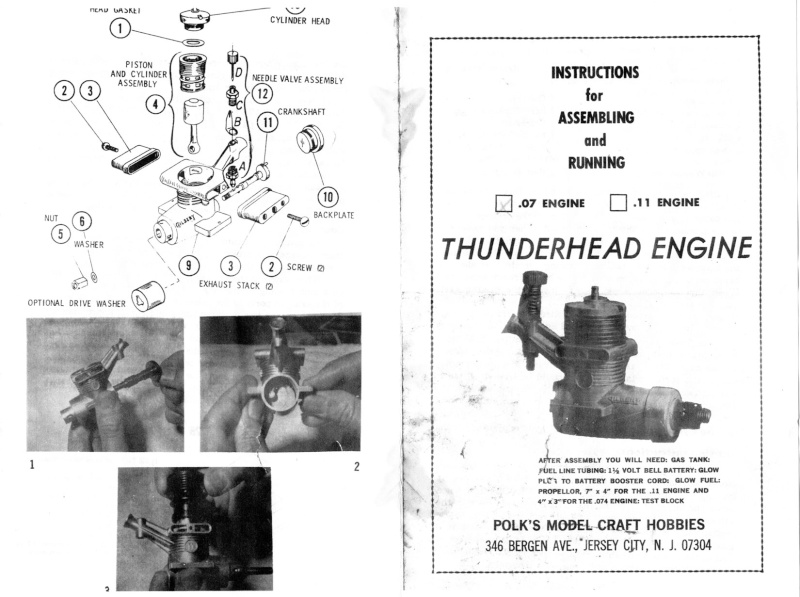 WOW way cool info Thanks Rod // The hole in it was what was throwing me off I guess no point ?? but I can fix that , any way I will need to clean all that out and see if wee can smoke some castor out of that old Gilbert

Some more weird weather this time of year . Wish I had those stacks on that engine , would really lower the tone . Thanks Rod !   Eric

O yeah I have the paper work for that eng. I really should read them!!!!

I had an .11 and .7 running on my Lazy Bee this past summer, and they were pretty easy to start. No power houses, but still fun to run. I had both of them going on 15% (I think), and put several flights on them before going to another set of engines on the Bee.

They looked easy to start thats a + Thanks for the repost Kim , Eric

Mine are easy to start. Just be aware that they run just as well in either direction.

@Kim wrote:I had an .11 and .7 running on my Lazy Bee this past summer, and they were pretty easy to start.  No power houses, but still fun to run.  I had both of them going on 15% (I think), and put several flights on them before going to another set of engines on the Bee.

That's neat. What wingspan is your Lazy Bee?

I flew my Enya 09-III TV with a 7x3 prop. The Enya has strong torque at the lower RPM's, Peter Chinn commented that there is no advantage to props smaller than a 7x4 because it didn't spin them up fast enough to take advantage of them. It flew my 40" span Cessna 180 foamie like an 049. That is what I imagine the Gilbert .11 to be like. The Enya provided sparkling performance on a 7x6 wood on the same plane.

The Fuji 099S-II being a little less than the Enya runs best on a 7x5 prop. I consider the older OS Max 10R/C to be around the same performance.

Was going to use the Gilbert .11 Thunderhead on my 46" span Berkeley Impulse, but after assembling the fuselage lacked sufficient width between cheek cowls. I'm more or less strapped to using the Thunder Tiger GP-07 in its place, since it is narrower like the Tee Dee 09.

I'm thinking the ideal candidate would be the DeBolt 1/2-A All American.

Funny you should say that George , I have the All American in my Q well for a while to build / I am really wanting to get at a mid-range air frame for 09-15 size engines . Because my field behind the house will fly up to 53' lines without taking out trees and I am thinking slower with more torque , something my hip and I can have fun with. Eric

Getback, the 26 inch (660 mm) All American might be smallish for the Enya 09, as it is powerful and in my humble opinion ranks well with the plain bearing sport Schneurle 09's and 10's on decent nitro fuel. The Gilbert 11 Thunderhead would be a shoe in for the All American. Also, since the Gilbert runs best in upright position, the All American is a natural. My impressions are that the engines listed like the McCoy 09, OK Cub 099 to me are about in the same class as the Gilbert 11 powerwise, although I could be wrong. (I don't have those engines so I have nothing to truly compare with.)

The best part is the All American is full fuselage and looks classic, fitting the earlier era of these side port engines.

That's neat. What wingspan is your Lazy Bee?

I've got two wings for the Lazy Bee: 40"and 50", and used the latter since it makes the little plane a lot more forgiving. Between it and the Bee's BIG rudder, single engine running was no worry as long as I could get it up to a little altitude before one gave out.

That is neat. The Lazy Bee with generous wing area flies on its wings. One could probably put the GIlbert .11 on a Q-Tee. It has ample wing area, would fly spritely as it is hotter than a reed valve .049.

thought I had it tight but at the time my wrench was bent , and after straighten it did not try to tighten again . Anyway has more compression with a POP to her now and hope to rerun today will report also want to do the breakin if still needed / Going to be in the 60s again and want to get the reed speed in also

A problem with the Gilbert is how to mount it and accomodate the rear venturi. I bought several discontinued Hayes small engine long mounts. Here's the Gilbert 11 with the Hayes AL-15 engine mount. This should make it easier to mount on an RC plane. I can run the fuel tubing from the clunk tank through the firewall up to the venture. It gives an option for CL planes, too. 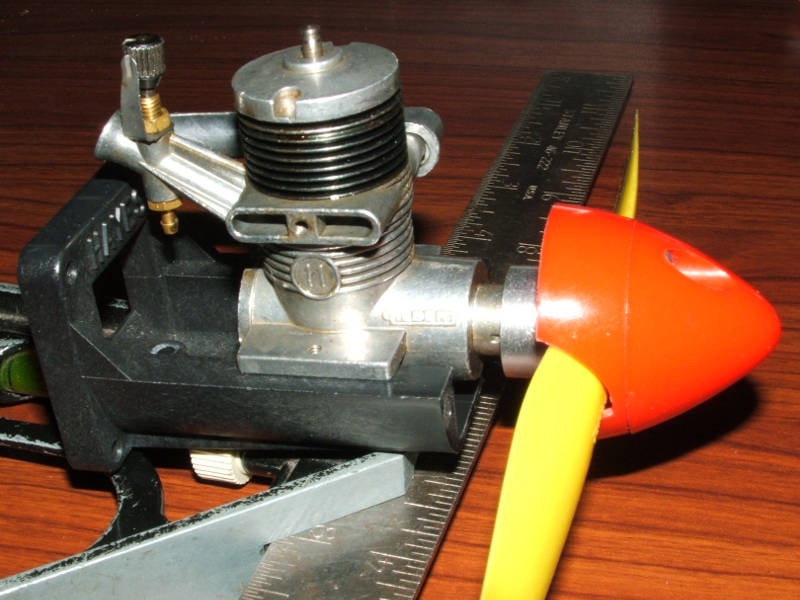 Recently came up on Outerzone, here may be a good easy to build candidate for the Gilbert .11 Thunderhead with 24 inch (610 mm) wingspan:

It has a simple boxy full fuselage and provision for a Gilbert sized engine to be installed. Shows a Supertigre G33 diesel 1.5 cc (.09/.10) installed. Plan appears to be in Italian (at least that is what I think it is), but is detailed enough that it is easy to figure out.

You will also notice that the machined glow head has a nice trumpet shaped combustion chamber. It will out perform the Die cast aluminum one which has the poorer design. These glow heads for the 11 will fit the Cox Medallion .15 engines as well.

FWIW, mine turns a 7x3 MA @ 14.2K on the bench, 8% nitro/27% oil.
I bought a 6-pk of heads along with it and here's pix - note different top contours, wrench slots and combustion chambers!
I have no clue what that's all about. 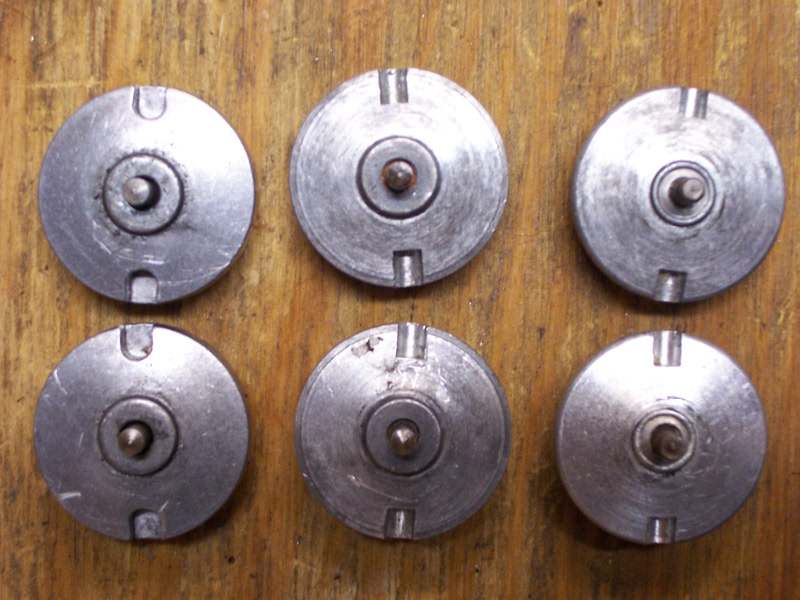 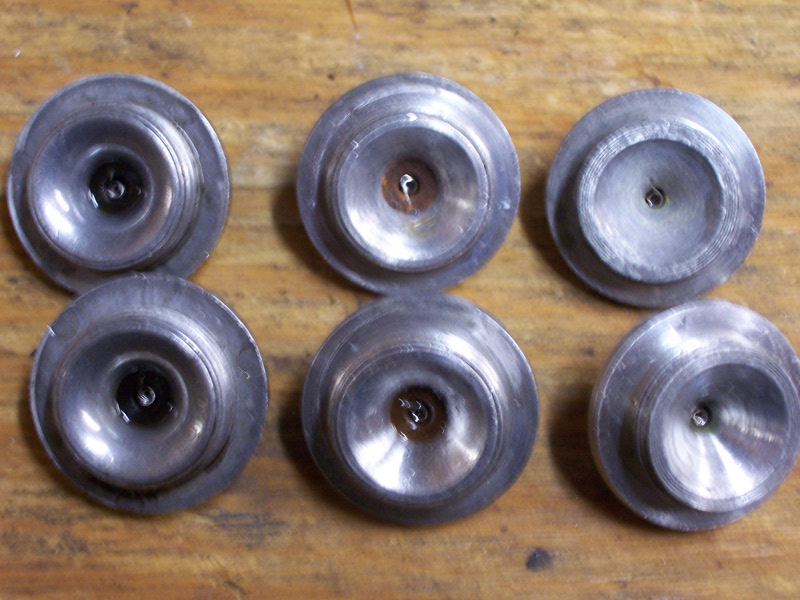 If I live long enough, I'd like to put it on something vintage like the AA or my favorite, the Pee Wee Zilch, tho' with the fatter Wee Duper style ribs (a Pee Super maybe? Green, of course

@Controlliner wrote:You will also notice that the machined glow head has a nice trumpet shaped combustion chamber. It will out perform the Die cast aluminum one which has the poorer design. These glow heads for the 11 will fit the Cox Medallion .15 engines as well.

Hmmm... never knew that. I might just pull the head off a Medallion .15 and check it out. And I wonder if a Cox .15 head would give any performance increase to a Gilbert.

I have a Fox Rocket i am wanting to run and if works out build something for it to fly , My Gilbert 's still haven't found mufflers for them but did run OK , Good info on the plugs . Thanks

My earlier efforts with a Stuntman 23 and Swordsman 18 came to naught.

The Fox worked well with a 7 x 3 Tornado prop.