I'd like to make the insert like Ken did with the prop hub and thread the center hole for a Tee Dee venturi and use a KK Tee Dee NVA. But that's for another day when I have time to tinker.
y

Rusty --
The C/L venturi's are still available thru NVEngines and will fit the 04 to 07 cases. While it is an investment, in the long run, it may be an easier retro-fit for one of the fine thread NV's. 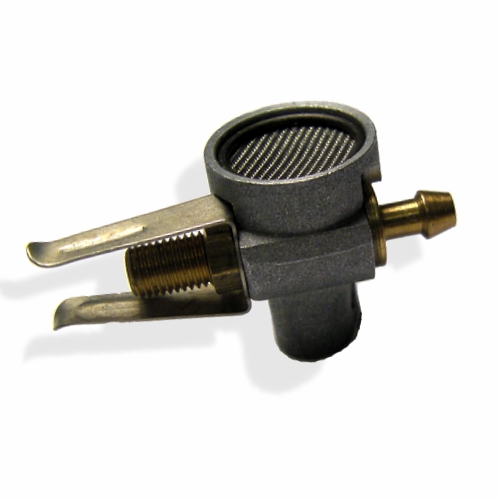 I'm wondering, could you print a simple insert from a 3D printer? Drawing up the CAD model would be the hardest part. Sourcing the fuel resistant plastic could be difficult though.

@GallopingGhostler wrote:George, I do have an option with mine, purchase a Big Mig venturi and NVA and thus convert it. I figure in such configuration should have at least the power of a Tee Dee .049 and perhaps a little more. Schneurle porting has an advantage, although I'm thinking that the Tee Dee's porting probably approaches that of Schneurle. Makes one think what if Cox had gone to ABN technology with their Tee Dee with reduced friction nickle coated sleeve and lighter weight lower mass aluminum piston, we might have seen some great phenominal development.

I got my Zeus from Carlson Engine Imports and I think at that time they were running with bladders with and without the plastic insert. I think Carlson also had a suction intake for it. Perhaps he still does.

The early CL AME's had weak intake suction unless a small prop is used to increase venturi velocity.

If you use a large prop like a 6x3, I think the Tee Dee handles it better.

Some folks who tout that the NORVEL has more power are comparing a NORVEL .061 with a TD .049.

I forgot about the Conquest. There's some history there but I can't remember the details. Was this a K&B design? Yes, it was a very hot engine, too bad that Estes Cox didn't continue the tradition.

If I remember correctly, Cox sold the Conquest design to K&B. At that time K&B had their own very successful .15 but stopped producing it and used the Conquest as its replacement. Later, K&B was bought by MECOA.

Apparently the cylinders were interchangeable between the Conquest and the Rossi. Someone tried the swap and reported increased RPM in both engines...can't figure that one out. :-)

I heard they started mixing and matching engine parts from existing inventory toward the end, so they lost even consistency among the reed valve half A's. I bought two of their Sure Starts before the Estes on-line store closed, paid $7 US for them plus shipping. Compression is somewhat loose on them. When I bought a Cox back in the 1970's, they had tight compression. Fire one up for the first time, there would be fine metallic particles in the spent oil around the cylinder head exterior. Similar to Schneurle, from that point they were broken in enough. Fill, prime, fire up, tune, they were ready to roll.

Yes, apparently ESTES stopped tapering TD cylinders, used the same tank for Babe Bee, Black Widow, TEXACO, etc. as a cost saver to compete with the foreign market. You know, with ESTES used to working with balsa because of the rockets, I never understood why they did not make balsa RTF's. Oh well.

One of the secrets to the Cox fits is that Leroy Cox had some ladies in the production line that specifically fit pistons to cylinders. I understand that during the NORVEL time, the production folks adopted that same technique.

Some folks who tout that the NORVEL has more power are comparing a NORVEL .061 with a TD .049.

That's true, I'm guilty of forgetting that displacement difference. I get a little excited extolling the qualities of the .061, and I have never actually run any of the Norvel variations of an .049. I'm disappointed to hear of the problems with NV Engines' poor P/L fits.

Cribbs has a new pre-revlite .049 now, so I'll be curious to see how his compares. He was surprised at how my big Big Mig ran. He looked a little intimidated when he took hold of my 35' lines his first time, but flew it perfectly. I couldn't fine anything in my fleet that was too fast for him.
I'll try again next time he visits.

@gcb wrote:...One of the secrets to the Cox fits is that Leroy Cox had some ladies in the production line that specifically fit pistons to cylinders. I understand that during the NORVEL time, the production folks adopted that same technique.

I talked to Bernie before I ordered some of his new modified Tee Dee .049 P/C sets, and he has his staff trained to feel for the right fit when they put them together. I was happy to hear that, and when mine came, sure enough, you can't push the piston all the way through the top. Both had identical fits. All you have to do is some slight deburring around where the exhaust ports had the bar removed and the exhaust deck lowered for SPI with a full skirted piston. I haven't installed one yet but I expect them to run as well as an old #4. No piston taper but still a good tight pinch at the top of the cylinder.
Rusty
_________________
Don't Panic!
...and never Ever think about how good you are at something...
while you're doing it!

Flying on 35' lines with a Norvel is bit much. Going out to 42' gives you a bit of real estate. However, I use 35' lines with Norvel's for practicing . The speeds are closely associated with ball bearing .049's flying on 42' lines. One thing with these engines are that from the time they were produced, the venturi sizes are were over the place. I've had some with too large of a venturi to operate on suction without the assistance of muffler pressure and some with too small of a venturi. The bolt in venturi's will leak and really should be glued in as well. JB weld works terrifically for this and it can be removed using a heat gun. I don't use mufflers on these but for those that had too large of a intake, I needed too. I don't care to use crank pressure. A Nelson Galbreath head setup generally gives you 800-1000k rpm's over the stock units. I use the stock plugs until they go and switch over. Ken