Half A Day. Yeah!

Half A Day. Yeah!

No doubt, a day of thrills and spills.
10:00 Saturday morning, Huntersville, NC. Be there!

PT-19 not shown, but fully preflighted. All of these are airworthy!
And a couple are still warm from Ron and Matt and me. 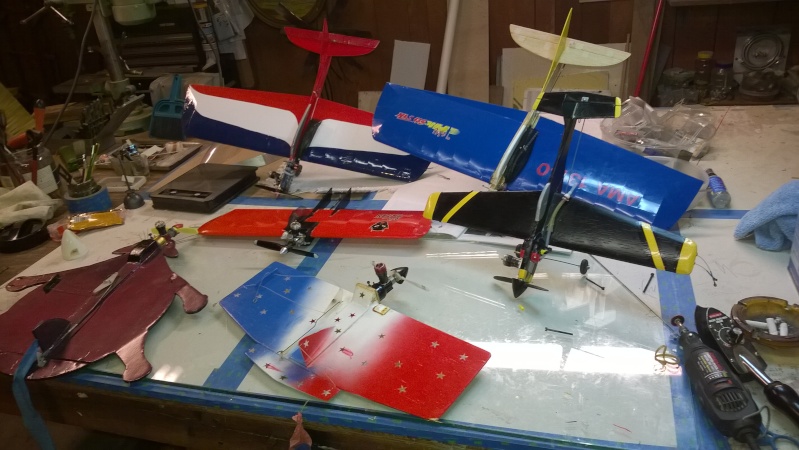 And the Yak-9 got a red nose. It's coming along to chaperone the babies. 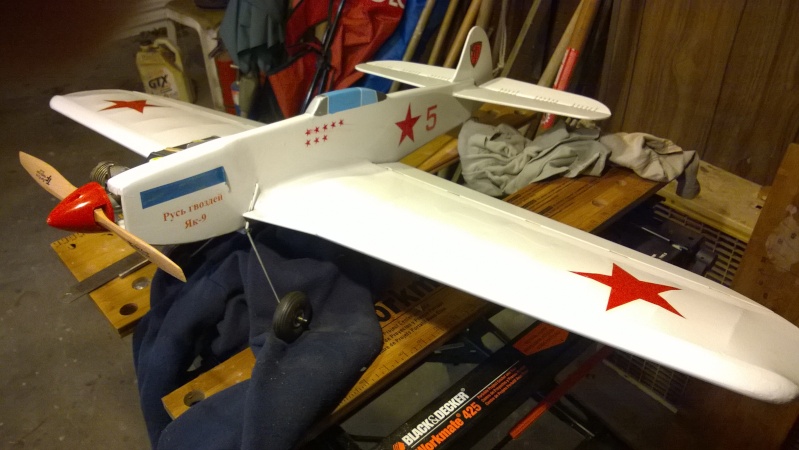 Is that an extension for the spinner? Or is the wood blade skinnier than the APC?

Cribbs74 wrote:Is that an extension for the spinner? Or is the wood blade skinnier than the APC?

The wood hub is thinner. After test fitting the extension nut, I was completely confused. I have no idea how to use it or what it's supposed to do. Not what I imagined at all. There are two different sets of threads inside the nut, one fits the shaft and the other fits... something. Hell if I know what.

Well, basically you have to buy a spinner that has a center lock down bolt. I have a Fox aluminum spinner that works that way. Veco spinners also had center bolts if I am not mistaken.

I am sure someone around you has an old spinner that will work with that setup. I think a polished aluminum one would look good on that thing.

That has to be it. Maybe people will be bringing junk boxes tomorrow and I can find one that will work.

Man, it's going to be cold again tomorrow, but sunny with 2mph wind. I'm going to get a can of Ronsonol on the way to help with cranking.

I put new bladders on the planes too. That poor old flabby thing on the Li'l Satan was pretty pathetic looking. like a bad coronary artery. Lol

Thanks for the 1/2A fuel, looks like i'll be putting it to good use tomorrow. Did you see what Balogh's audio tach read Matt's Lil Satan flight? 22k, and someone else said 23k RPM. I'll take that. It's just a junk box parts engine I think, with a new #4 on it. I'm going to give the old .051 on the BFS-I one more flight tomorrow. I'm down to 2 head shims with the Merlin clamp ring. That's pretty worn down. I probably ran it too lean in its earlier life. It was a $32 eBay buy so I got my money's worth out of it

I can't wait to wow everyone with the Li'l Satan. maybe I'll get the most exciting flight award. They give awards based on applause.

Half A Day 2014 is in the books!
Lots of planes lots of flights. I came home with yet more wood for my shelf. One for my Li'l Satan flight, or possibly my combined body of work. And the other for my still cool looking Baby Flite Streak. They took lots of pictures and I'll post as soon as I get them via e-mail. 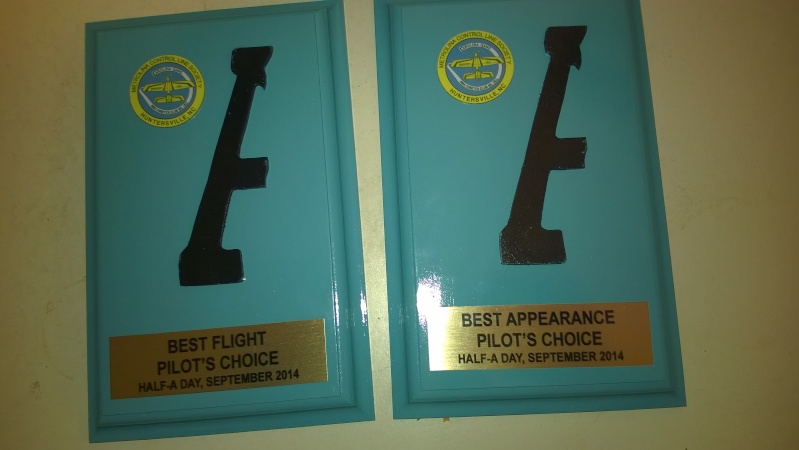 Wow, if only you could have stayed here a couple more days. I would loved for you to go fly at Huntersville with us. You might have taken one of my trophies home.

I had another couple of engine runs like we had the other day. The Big Mig on BFS-II quit with a half full bladder and so did the Li'l Satan, only it strung out the surging for 5 minutes. I restarted the Norvel and messed with the needle, but lost track of where it was rich/lean and it flew great like we remember from the Church yard. Only this time I had a 5-1/4x3 prop on it with the 40' lines. Pretty much stood still and flew it in front of me except for a couple of reverse wingovers and inverted laps just for showing off. To me that's what 1/2A is for, showing off! The old red white and blue BFS-I with the Tee Dee .051 ran perfectly with a 5-1/4 prop and the old dog flies just as agile as the BFS-II. I didn't think it was really the best looking plane out there, but it was nominated and applauded the loudest... so who am I to argue.

For best scale plane, there was only one, a twin Bee warbird of WW-II vintage. The president asked if anyone else had a scale plane... well yeah, my P-51 Reed Speed P-51 D Mustang, so I showed it to them, but the applause was wildly for the twin, including my own applause. I also introduced the new Cox Super Power Fuel and explained what it was all about. And promoted CEF.

I wanted to grease up some more of my fleet but after the meeting, everybody started packing out. Wayne had to take Watt home because when Watt decides it's time for something, there ain't no stalling him. Watt did give me a couple of old but good little planes that need engines and some attention. A Brodak Trainer with a questionable foamboard wing and a Stuntman23 that looks to be in great shape. Maybe time to use my Medallion.

The fort gave up on all the security crap. I guess it was too much trouble, so it's back to civilians showing driver licenses again. Wayne and I plan to go Tuesday. I have lines for the Magnum now.
So stand by for pictures. Will will e-mail them to us hopefully soon.
Rusty
_________________
Don't Panic!
...and never Ever think about how good you are at something...
while you're doing it!

Sounds like a good time! Profitable too, it's always nice to come back with more than you came with.

Most folks think 1/2A is a waste of time and never went past the Babe bee and slab wingers. I bet when they saw you ripping up the sky and pulling off pattern stunts with a solid engine run they were amazed!

Cribbs74 wrote:Most folks think 1/2A is a waste of time and never went past the Babe bee and slab wingers. I bet when they saw you ripping up the sky and pulling off pattern stunts with a solid engine run they were amazed!

Most of the small group of 1/2A members build really nice planes, lots of scale models and inventive self designs. You'll see when the pictures come. There must have been a hundred planes. But to win a category you have to fly it, and very few people did. The most active pilot today besides me was a speed flyer, David Smith, but his plane wasn't 1/2A. I don't know what it was but it was damn scary. And loud. The others who flew their planes just flew roundy round, and one was thrilled that she did a wingover. Her plane was painted like a jigsaw puzzle and won best appearance last year. The others are old and unsteady, so I had the advantage. They may very well may have been able to fly circles around me back in their day... Haha, did I really say that.

I overheard someone out of the corner of my ear complaining about the way I hold my handle in outside loops. I heard Wayne tell him, Hey, it works for him. Lol. Thanks Wayne.
Rusty
_________________
Don't Panic!
...and never Ever think about how good you are at something...
while you're doing it!

Yeah Rusty !!! you go man show'em how it is done cant wait for the vids and pics

Haha, That's better than being Mr. Half Way any day.
I'm lucky some of those other planes didn't make the qualifying flight. There are some really good builders in the club.

It is sort of a clever design. Anybody who can't tell what it is can be Mr Half Way for a day.

I didn't pay attention at first, I see it now!

Man I am taking things way too serious these days

I looked and didn't see it neither , Must bee those damn

Finally got some pictures. There will be more when the MCLS newsletter comes out.


If you click Full Size(twice on some browsers) you should be able to see Jo's plane, far left. It's a puzzle. She says it makes it easier to put back together if she crashes it. 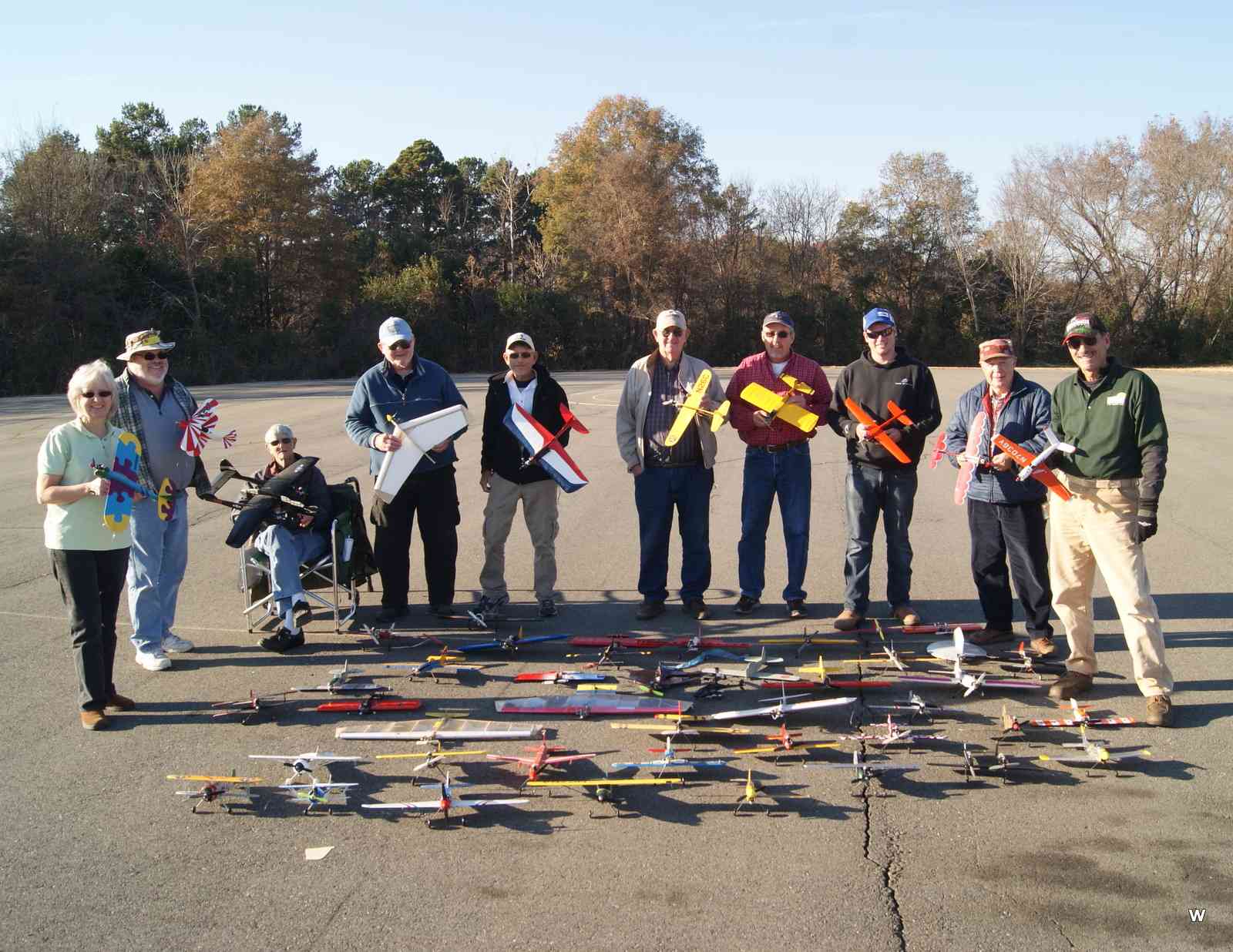 My best flight of the day trophy. That's a wicked Li'l Satan.
Damn, if I was any uglier I'd be scary lookin' 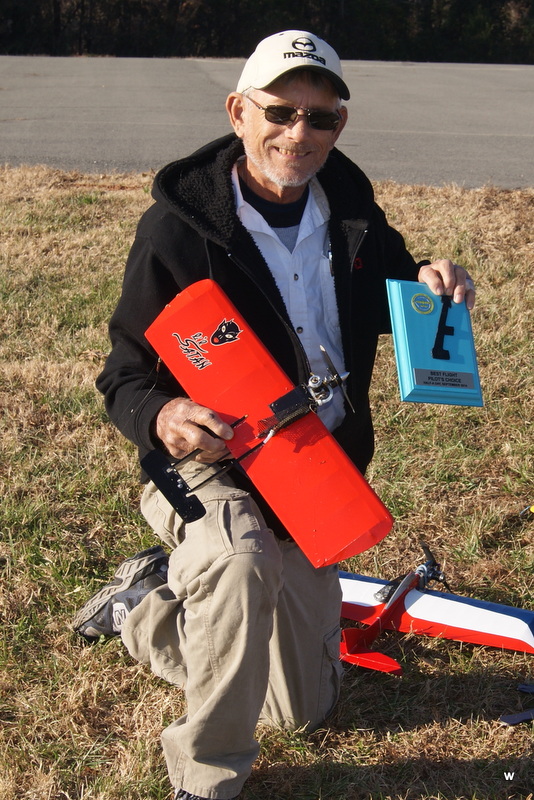 You actually smiled! Looks good on you.

Great pictures, and great turnout! How far is Mcentire from you? I may be coming back to SC in Feb.

You actually smiled! Looks good on you.

Great pictures, and great turnout! How far is Mcentire from you? I may be coming back to SC in Feb.

I did didn't I. I've only been able to grin at a camera since I started playing with toy airplanes. Not that I was never happy before, but I just am Not capable of faking a smile on demand. All of the people that look at pictures of ol' Great Uncle Rusty years from now are going to think, man, that guy musta really been an ass-hole. Lol. Hey, I'm always smiling on the inside!

McEntire is 8 or 10 miles from me. You passed it on 378 on your left whenever you drove from Shaw to my house. You may have noticed their F-16 out front.
That's so cool! Holley and I will be ready to give you another whirlwind of entertainment.
Rusty
_________________
Don't Panic!
...and never Ever think about how good you are at something...
while you're doing it!

That Looks like one fun bunch of friends and planes