Can some one give me some info on this old fox 19 and why does it have two inlets and adjustments ?!!   Thanks Guys !! 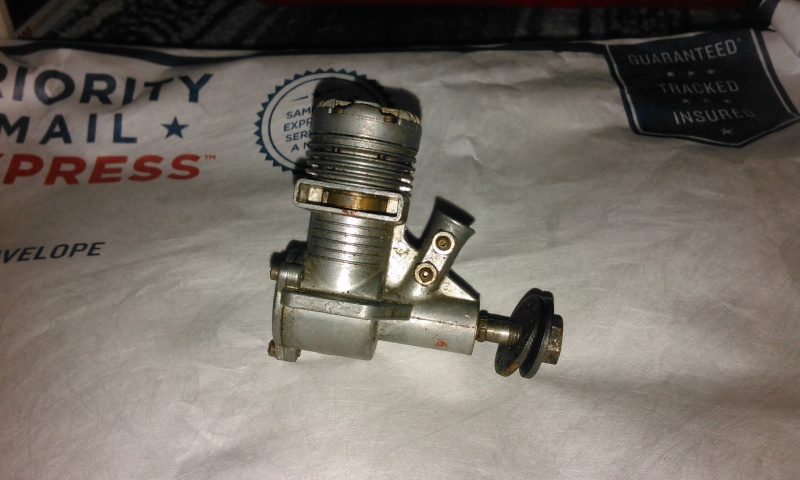 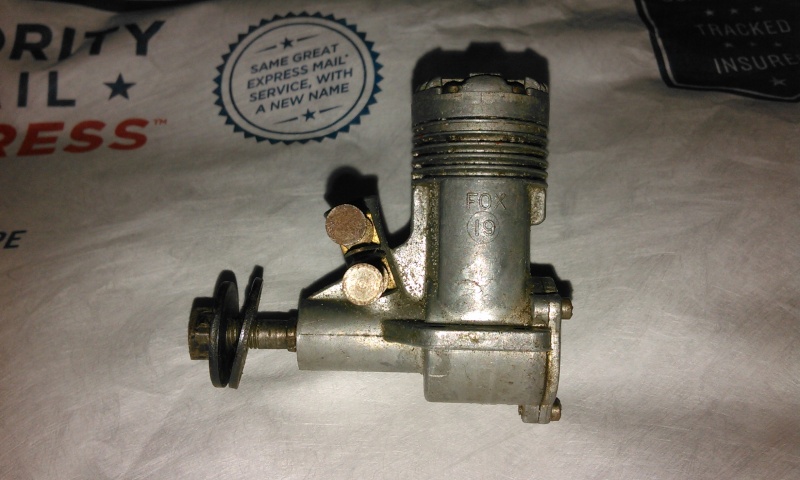 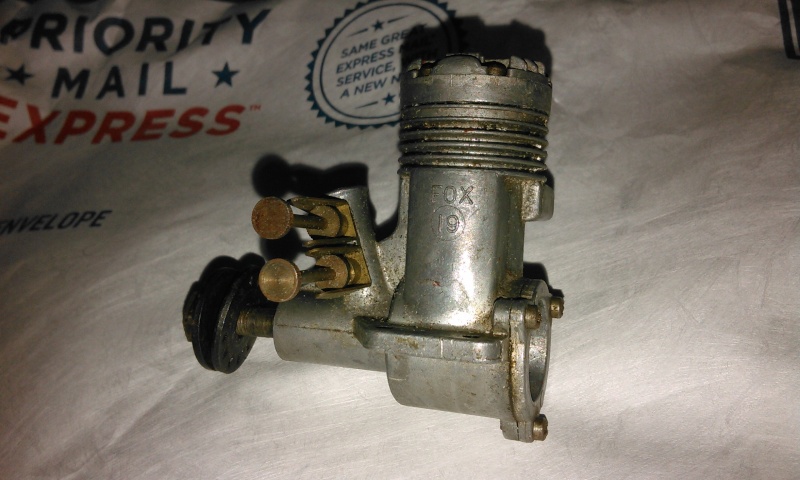 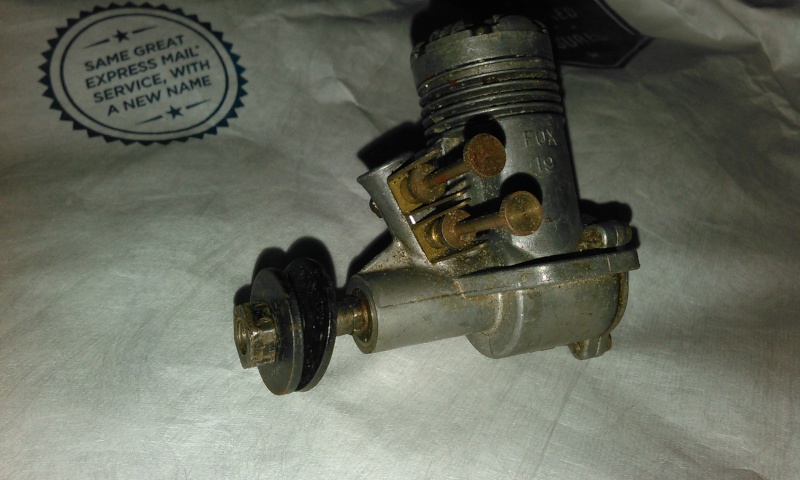 Well I found out that it is for hi and low speeds , did it have a fuel hose pinch system to run one or the other seems I have read this before ? The FOX59 had this system (found it in the engine history ) http://www.modelaviation.com/enginehistory

Eric, I believe that engine was known as the "Super Power 19." They were out in the early to mid 50's. While the version you show has the twin needles, I believe the casting came stock with one hole. A imprint like a die ejection pin marked the case where the other hole was. Duke also made a .25 based on the same case. These engines were the closest to the Fox .35 stunt you can note the 3 bolt backplate. The later 19's and 25's went to a four bolt backplate. Surprisingly they run similar to it as well. Ken

Mine came with the holes drilled. I believe only the later ones had the holes covered in the casting. Mine also has a curved piston baffle (plus matching head).

As far as I know, the two needles were for RC use with the old escapement and possibly reed systems. One needle was your high speed needle. The other was a low speed or idle needle. There was a special valve one had connected up to their servo or escapement via an RC linkage. The valve would switch the tank fuel supply from the high speed needle to the low speed needle, put engine into its low speed or "idle" configuration. These systems were more or less "bang, bang", it was either full on or full off.

Early OS engines had a similar arrangement. The advent of more modern proportional RC gear did away with the two speed needle arrangments.

Witch is Witch on the two needles I am thinking the lower one is for hi speed ? The spray bar holes are up on top or does the holes go all the way through ? 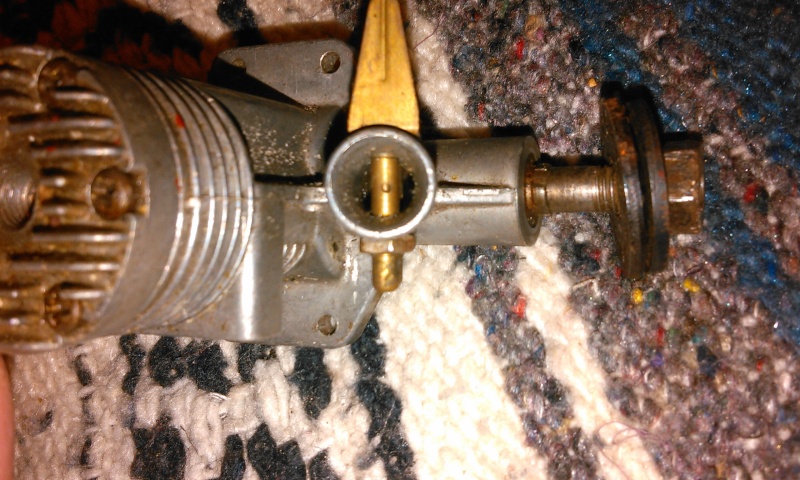 Well it is in Q for cleaning I want to run it to see if its a keeper !! Eric

Not sure which is Hi or Low, I can tell you that hole needs to be re-positioned. If it has 2 holes they need to point perfectly fore and aft. If one hole it needs to point down and slightly towards the front or rear. Your choice, I prefer the rear.

@getback wrote:Which is which on the two needles? I am thinking the lower one is for hi speed? The spray bar holes are up on top or does the holes go all the way through?

Well it is in Q for cleaning, I want to run it to see if its a keeper!! Eric

Eric, my guess would be that the high speed needle is the top one. The bottom one is the low speed. Reasoning is that for idle or lower throttle, the airflow restriction caused by the upper needle in the way of the suction air stream allows for better suction feed. But then, it is only a guess. Perhaps someone who has direct experience with this type of engine could give accurate clarification.

Ron is correct about the spray hole orientation. Can't recall exactly but it was something like rotation 15 degrees front or rear of center. Fox had a 2 hole design spray bar on some of their engines. If that then I believe the holes were to the side of the venturi.

George, you mentioned the curved top baffle and matching head. This got me thinking and I just couldn't hesitate to go and tear an engine down. My steelfin .15 has the curved baffle and head. My dad had this engine since it came out. He was into control line and freeflight. I never noticed much of this engine as it's been in a small candy tin for the past 50 years. I pulled it out to notice my dad did some modifications. First noticeable mod was the head fins were almost milled off. My first thought was that he did this due to chipping or breaking a fin. He was over for dinner and when I asked him, he claimed it was to keep the plug from cooling off. I know this engine isn't a high performance screamer but I bench ran it today. I was really taken back. I took the head off and noticed he did some shaving of the liner and also the head. This has considerably placed the compression a bit higher. I know these don't like a lot of rpm's but this one was singing out loud with a 7x6. I have growing concerns of keeping this engine in one piece. 50 years and two flips it was singing like a canary, go figure. I had to shake my head and laugh. He also cut and shaved the venturi. A very nice example in my opinion despite the mods. I noticed in addition that all casting gussets have been removed. This would include in front and back of the venturi stack. This stack was shaped similar to Eric's .19 with the trumpet bell top. There was also small triangular gussets from the lug mounts to the front of the case. My dad has this in a free flight job he made and he was trying to lighten the engine. I don't know if the mods really amounted to much. It certainly is so well done, if you didn't see the engine side by side to a original you probably wouldn't know.

The one downside to this engine is the fact that there's no cushioning between the wrist pin and the cylinder wall. I noticed he had the ends very smooth and polished. I'm quite certain Fox would've left that step out. Obviously a more desirable way would be to find some drill rod the same diameter and drill the ends and fabricate some Delrin buttons. I just may explore that option. For now it's high castor for this ole relic. Ken 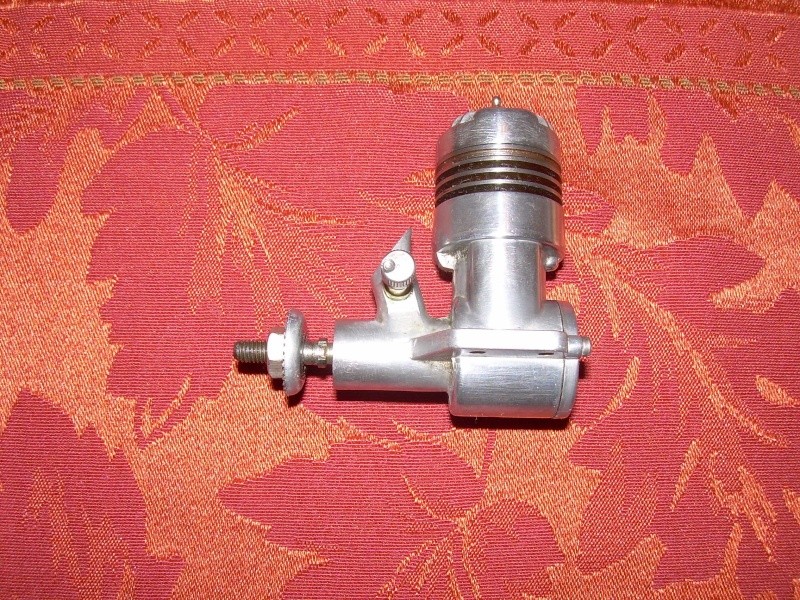 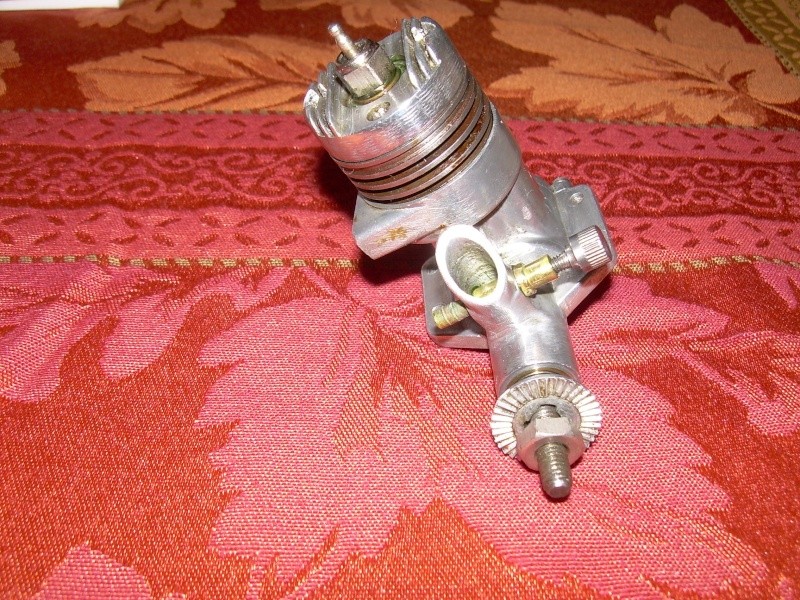 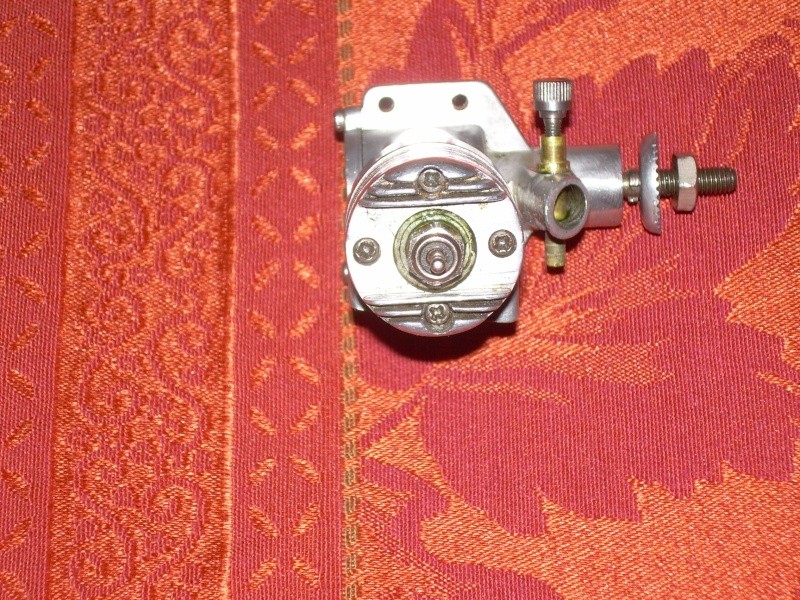 Ken , your Dad did a really good job on that engine he must have been flying some Big FF planes !! I got the 19 I the soak / also freed it up with a good oiling / what does anyone know about this piston baffle in the head ? appears to have one for power and the other for regular  use ?? 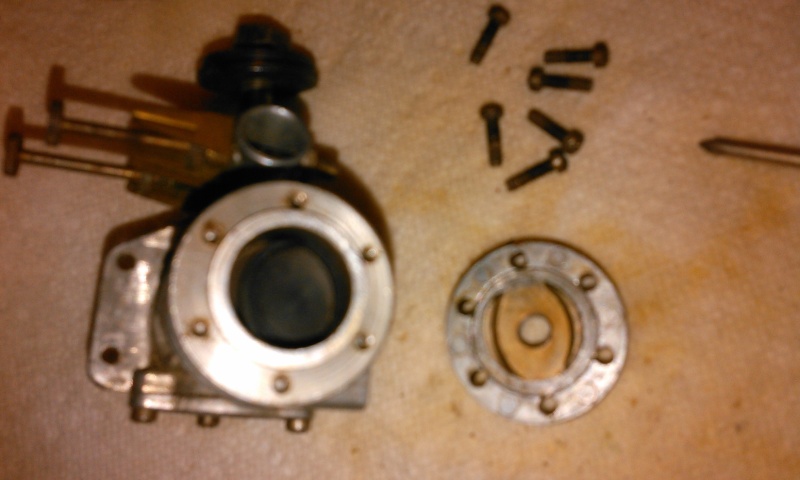 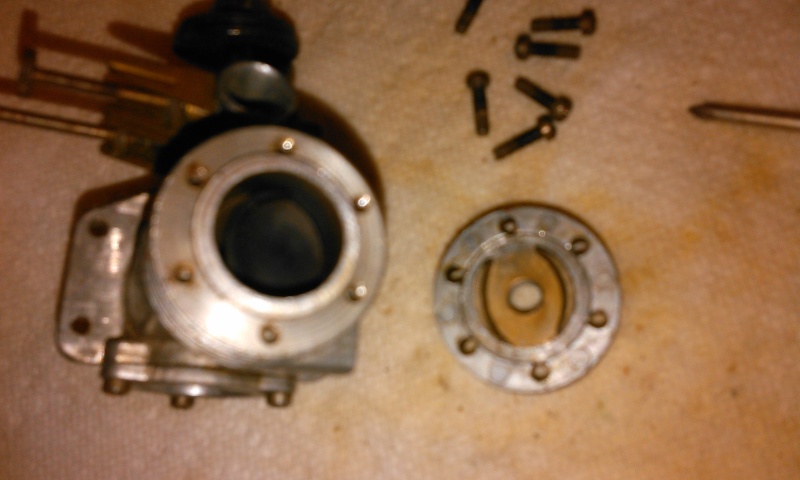 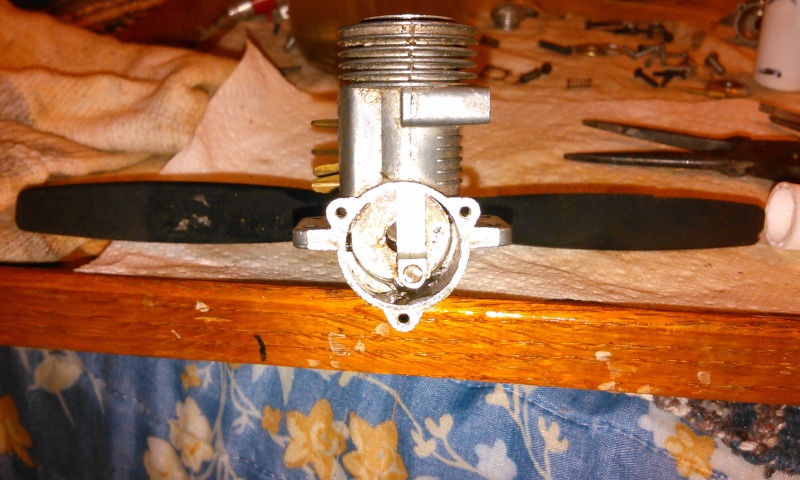 Fox .19 - There were several methods of hi/lo. I think the most popular was to set the lower needle for high speed and add the upper one for low speed. The upper one was usually operated by a valve that would suck fuel when closed, allowing extra fuel to make the engine run rich. When open, the valve would suck air and the engine would run at high speed on just the lower needle. and, per George, was usually operated by a compound escapement (back in the 27.255 days).

The CL version also had two sets of holes but the needle assembly was only installed in the lower holes. At least that is the way mine is. Fox two-hole spray bars usually have the holes drilled slightly offset. In this case, the orientation is to have the spray bar oriented so you can not see the holes looking down the venturi.

Fox .15 steelfin - I broke a couple of those head fins off also...but I just left them that way. That intake looks nice. Thinking back in those days was that a slanted venturi would yield more power by way of ram action from the prop. Fact is that it didn't help much in most applications...but still looks nice.

Fox .19 Piston Baffle - Mine looks sort of like a "C" when viewed from the top. Later ones used a straight baffle.