Restoring the Comet Starfighters, both engines were frozen and needed new pull strings, so i dug out the O.K. Cub parts/engines...lol, oh, why don't i just swap engines, quick and easy!

So since i had most of 'em out, why not a take some pics...Gentlemen, the Rodney Dangerfield of small engines: 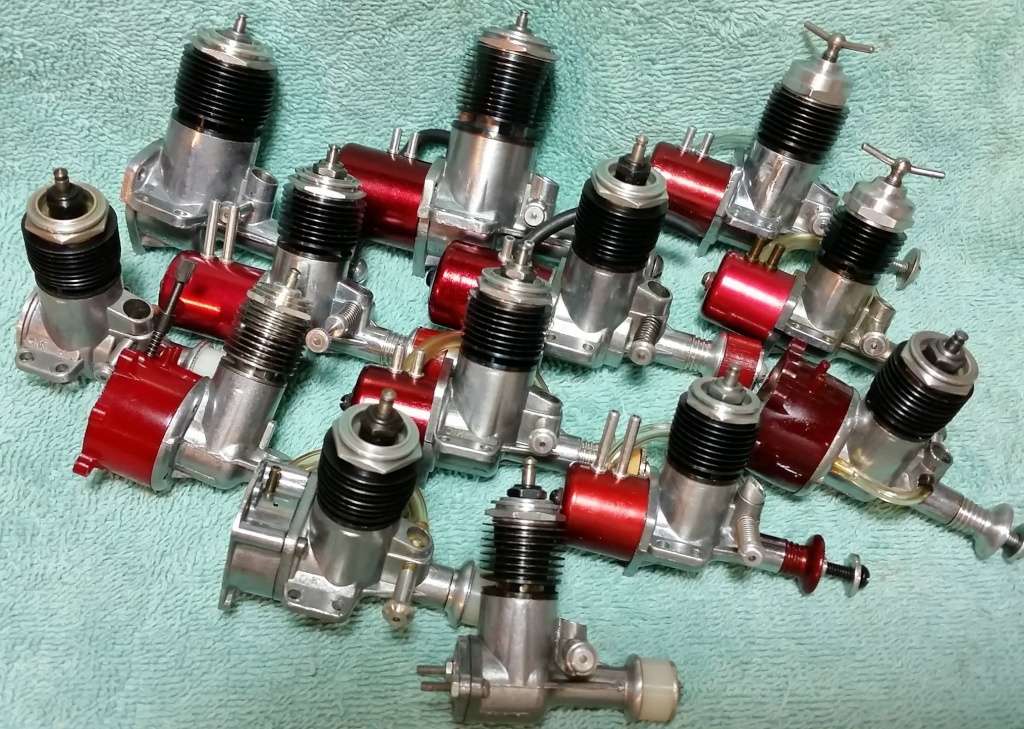 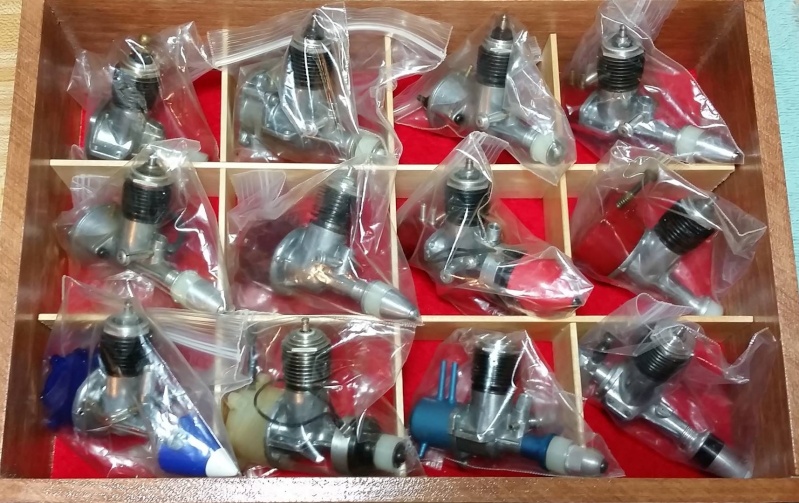 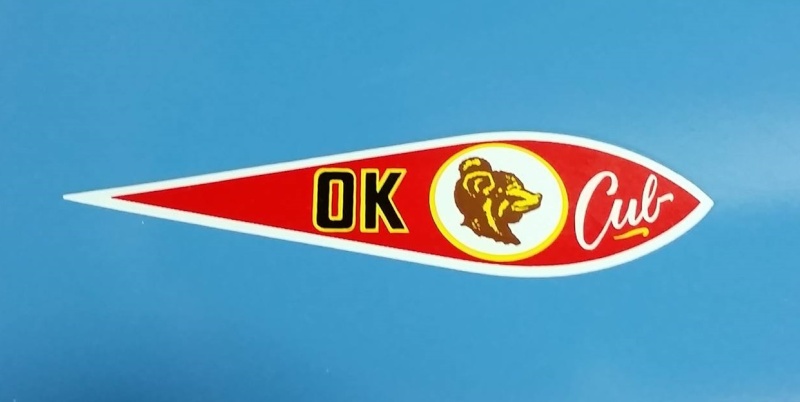 Ha HA ha ....take my wife...Please!! But Seriously, where do you find all those? You gotta bee the biggest CUB FAN in Chicago-land. If those are your "parts" motors you must have some pristine collector examples too. Thanks for the nice pictures.

No, sorry these are the good engines...I had'em out along with parts/parts engines (not shown) and took pics.

I like the Cubs - I have a few but only in red or silver. I didn't know that there were that many colours. Then again, you don't get many Cubs appearing in the UK.

Are any of the metal tanked versions a result of your adonising?

For me, they have the true vintage look and once the diesels start they run very well. I have not managed to get a first flick start on one of these even when hot.

That is a very attractive collection.

Nice collection Mark, and as far as I can see they all have needles. So many that you see do not. First time I have seen them with blue tanks.

My fellow club member Dan Banjock is currently in the process of making new pistons for his newest OK Cub project. He has 3 Ok Cub compressed air engines which were iffy at best when new. Two weeks ago while holding the 3 in his hand, he noted that it wouldn't be all that hard to make a new crankcase for a 3 cylinder radial compressed air engine. Last week he was working on the pistons to improve the fits. Ok Cubs have a neat look I agree. I do like the Super .60 and I find the sound of that engine to be most ejoying. Ken

NICE !! Mark I haven't seen some of those colors before either , Stylish for sure

Mark you are a Cuboholic! Do I see a .14 with a red tank in the first picture? Also, have you seen or do you have a Cub .099 with a rear ballrace?

Rodney; "My Father never loved me.. he carried around the picture of the kid that came with the wallet.. and my Sister.. was she was ugly....... She got a job at the bakery, where they pushed her face in the dough to make gorilla cookies!"

@GWILLIEFOX wrote:Mark you are a Cuboholic!  Do I see a .14 with a red tank in the first picture?  Also, have you seen or do you have a Cub .099 with a rear ballrace?

If you ever come across a early .049 "large case" with serial number, please let me know. All my large case .049 are the '50 or later, versions without the serial number.

Rodney comments to his wife that he thinks the kids are spoiled...she says: "Don't worry, they all smell like that!"

@Mark Boesen wrote:If you ever come across a early .049 "large case" with serial number, please let me know. All my large case .049 are the '50 or later, versions without the serial number.

I've attached a cover I did recently for the MECA bulletin.  Not all the variations, but I think all the Cub displacements.  Also, my early OK Power Kit. And an OK .049X Firebaby. The original is long gone after probably hundreds of flights.  I flew it on everything from 35' down to 10' lines, where ever we found space.  Lots of flight in the intersection in front of my house.  When a car came by, I'd go high and my buddy would wave him through.  Stupid kids!

It's easy to beat up the Cubs, but they worked, we worked with what we had, and we had fun.  That's still what it's about! 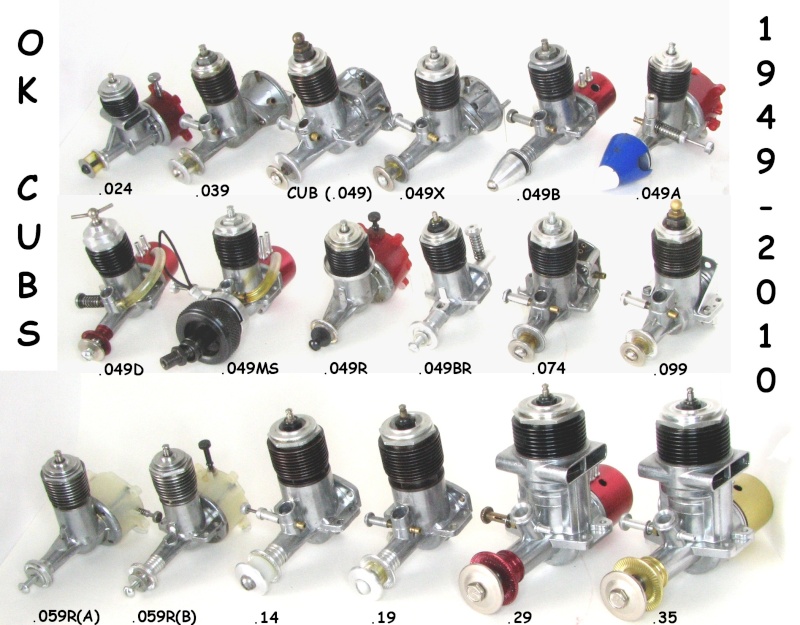 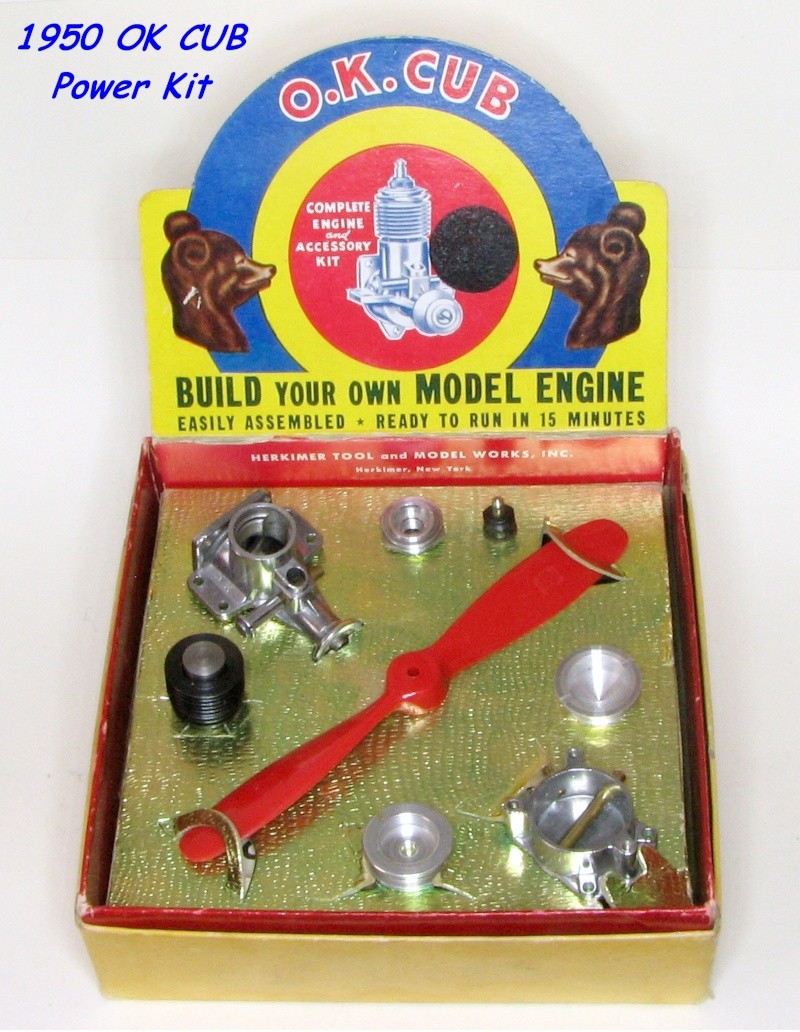 Can you please tell me about your .049BR? 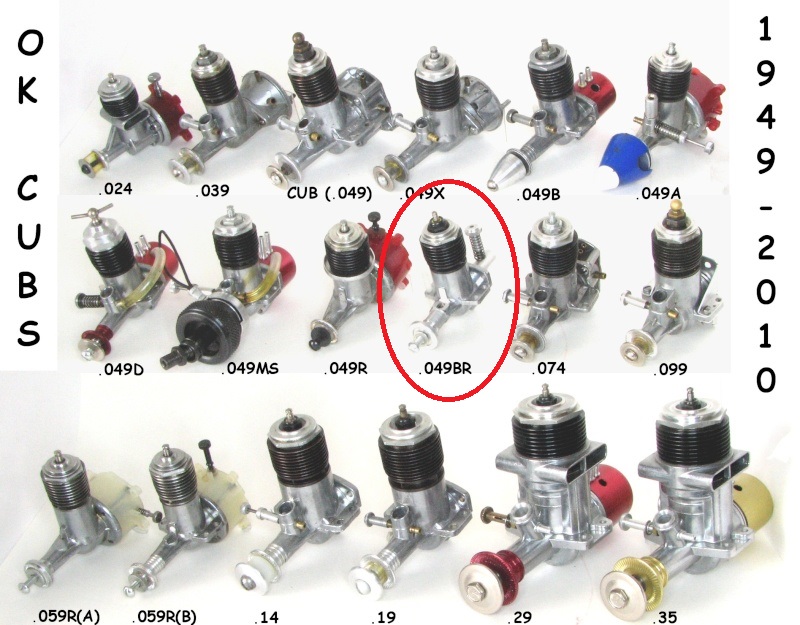 Ray Leone had a swell article on the BR I ran in MECA Bulletin #288.  It was available from Ted Brebeck at Herkimer for a short time (check with Ted to so if he has anything left, not offered on the OK site).  www.okengines.com

Here is what Brebeck had to say:
Thursday, May 22, 2014
“Hi Bill,  The OK Cub .025R project is near completion. The last part blank ( rear cover/ reed valve seat ) is coming off the line this week. It will need to then be drilled for the mounting holes. Engines will be ready after June 10th and will cost $49.95 plus our standard shipping charge of $9 per order ( not per engine ) so the more ordered the better to save on shipping. We also still have some of our 3/8- 24 glow plugs available for large engines at $6.50 each. Price on these will go up to $8 next year.

I read Ray Leones' article that you sent in your e-mail. As a reminisce piece it is fine. The reasons for some of the product model and parts changes is not that important to an article of this type. As a point of interest, there were 500 Mohawk Cub ( B ) engines made. It was the anniversary year of the absorption of Mohawk Engineering Co ( 1953 by Herkimer Tool ) and we decided on the Mohawk Chief blue for the nose and tank for this as well as printing the box with actual left-over ink and printing plates from the Mohawk Chief box.

As far as the R series engines, the OK Cub .049R was used in our ready to run OK Hot Rod from 1959 thru 1964. The BR although advertised was never sold in the 1950s. I brought back the OK Cub .049R, OK Cub .06, and the finished version of the OK Cub .049BR in 2010 and made them till 2012 making a little over 300 of each at that time. Very few are left now. I knew we would have our 75th anniversary 2013-2014 so started making the OK Cub 049A for 2013 and the OK Cub .025R for 2014. This finishes OK Engine production with the last design of Herkimer Tool co-founder Charles I. Brebeck.   Tooling and unfinished parts continue to be scrapped and we will cease the engine department in 2015. I will continue the model train department as a retirement business.”
Ted Brebeck at OK Engine Co.

Ted is the grandson of Charles Brebeck, founder of Herkimer and designer of their engines.  If you get on the AMA website, open the Museum tab, then open the HOF or Hall of Fame section, you can find a biography of Charles.

The BR is an 049B with the venturi cut off, a solid crankshaft (049A?), the rear cover assembly from one of their reed engines drilled and tapped for an intake tube, and a conventional NVA pressed into the intake. 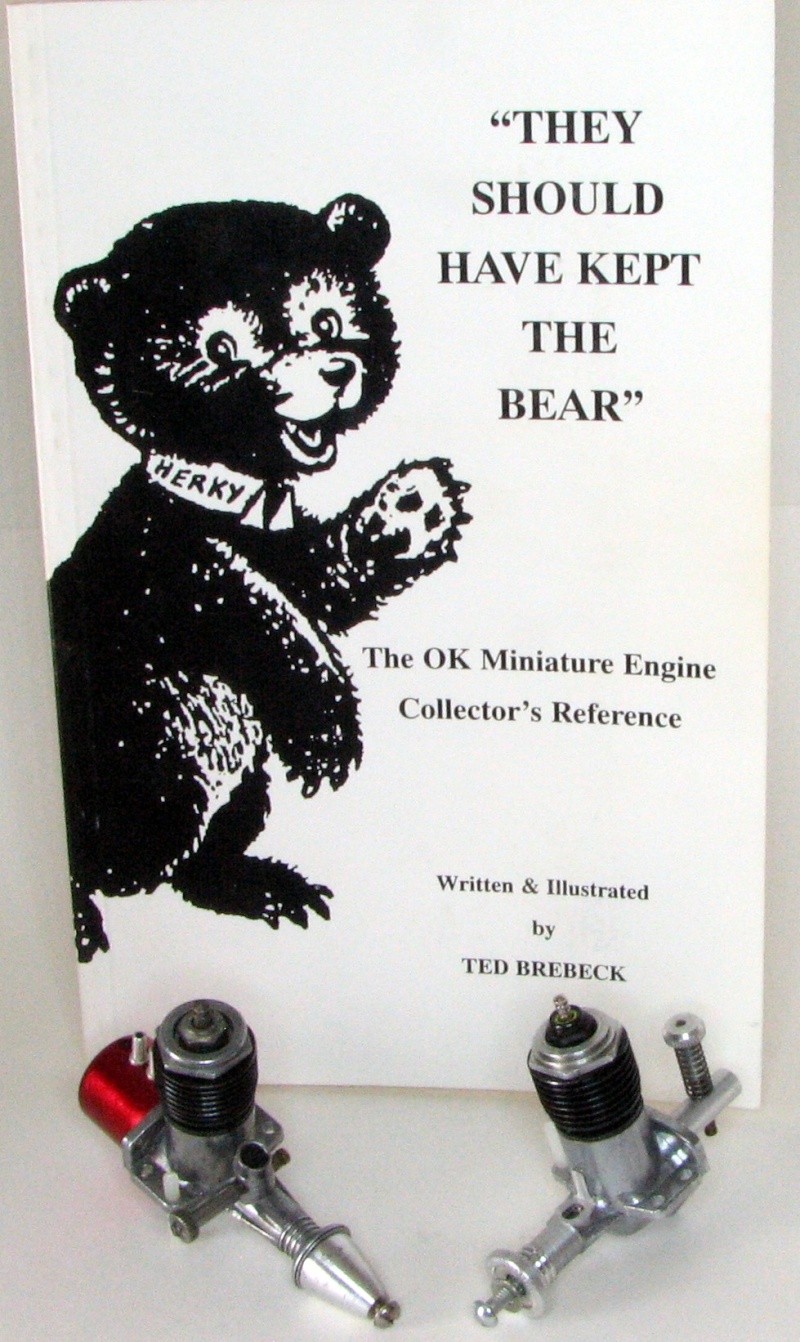 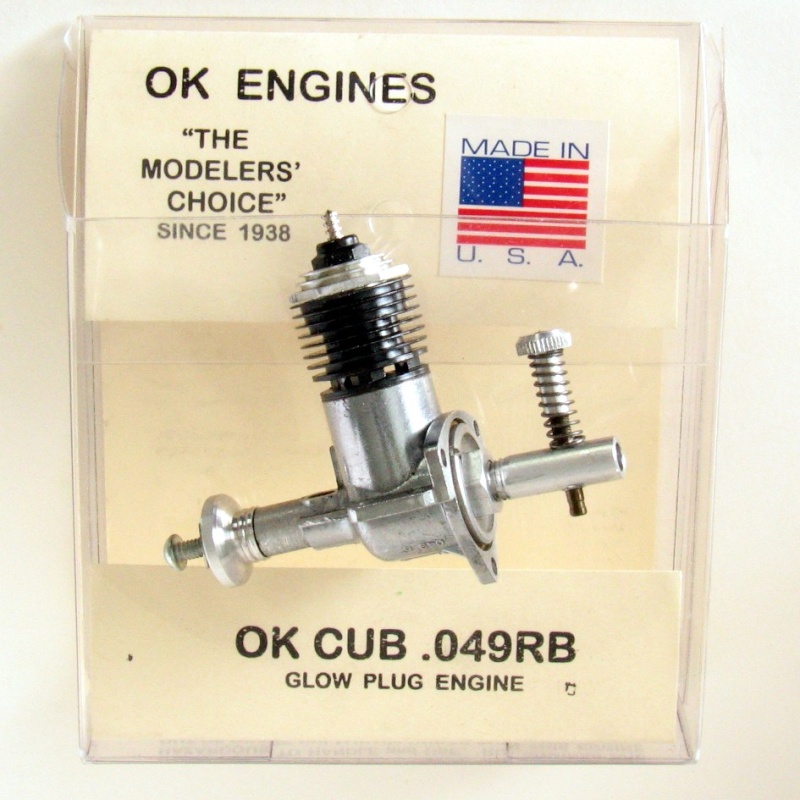 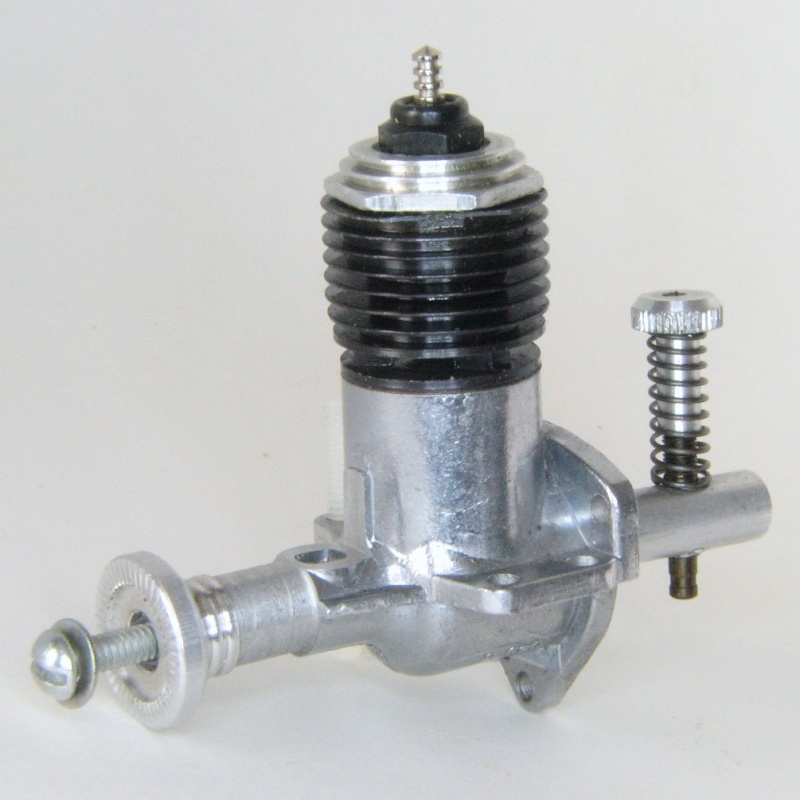 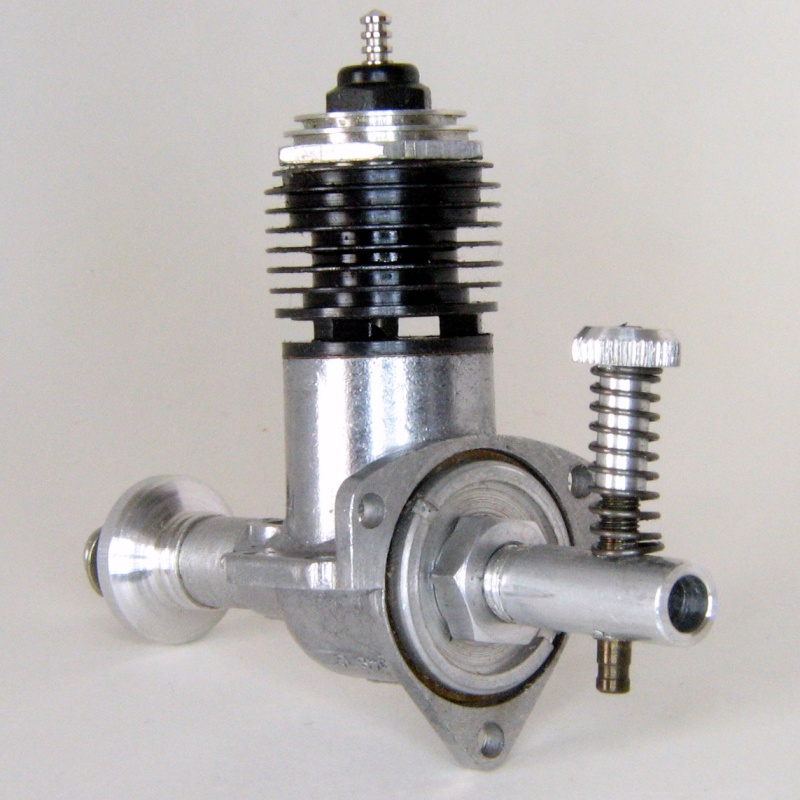 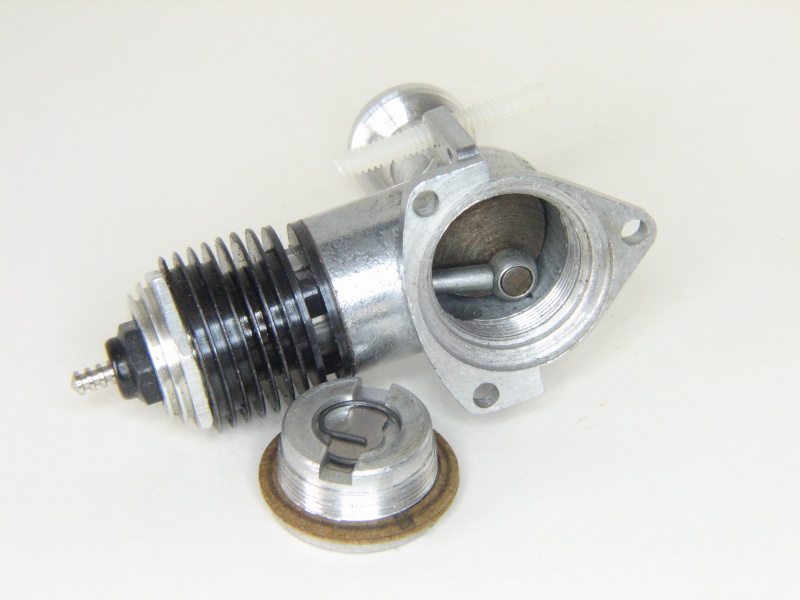 I think the BR piston must be from the diesel with the heavy wall, steel rod, and wrist pin. 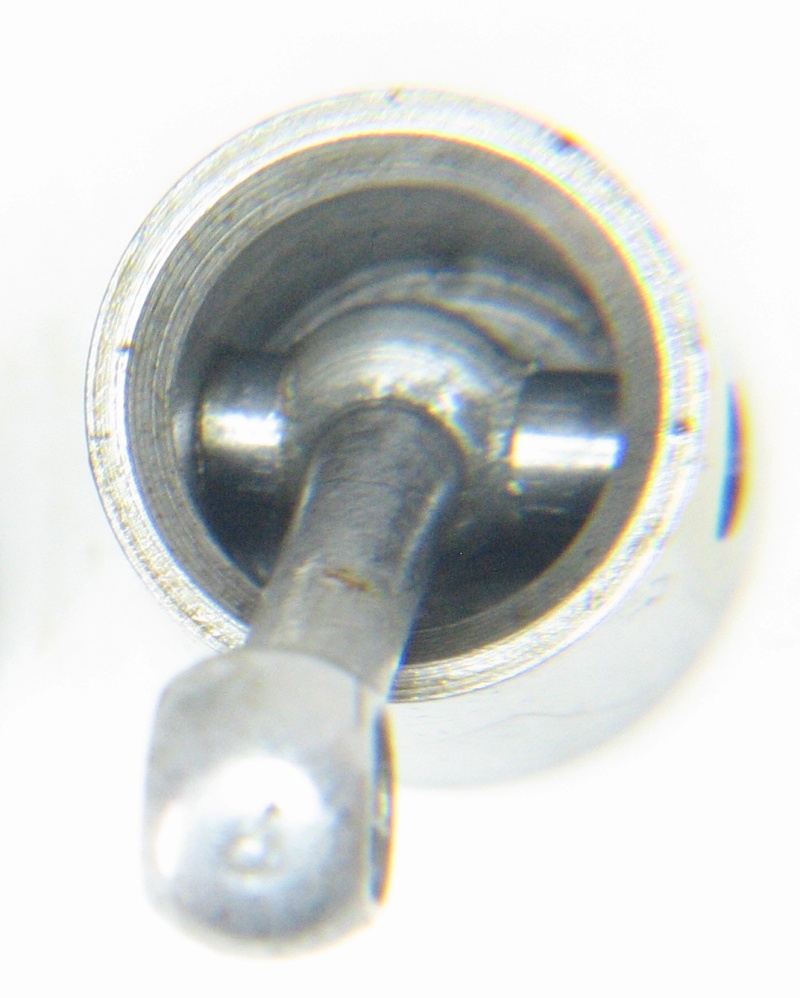 @GWILLIEFOX wrote:
Here is what Brebeck had to say:
Thursday, May 22, 2014
“Hi Bill,  The OK Cub .025R project is near completion. The last part blank ( rear cover/ reed valve seat ) is coming off the line this week. It will need to then be drilled for the mounting holes. Engines will be ready after June 10th and will cost $49.95 plus our standard shipping charge of $9 per order ( not per engine ) so the more ordered the better to save on shipping. We also still have some of our 3/8- 24 glow plugs available for large engines at $6.50 each. Price on these will go up to $8 next year.

I'm not one to bash on anyone or company, but I don't recommend buying any of the .025's! I've heard there have been quite a few quality issues with them. A fellow control line flyer and friend ordered one and it arrived with an unfinished needle valve insert. He e-mailed OK Cub, and Mr. Brebeck refused to send a new tank or refund. So my friend is filing a C.C. claim. I also have two .025's that a member from another forum sent me to look at as he could not get them running. The .024 has a metal ring that sits inside of the crankcase between the connecting rod and crank and the back plate / reed valve assy. and acts as kind of a bearing surface. The .025's did not have that metal ring causing the connecting rod to fall off of the crank pin and beat against the back plate / read assy. on both engines.  One engine has decent compression and one has almost no compression and on one engine, the needle valve has to be turned out to almost the last thread before it starts to get air flow.

I don't recall a "BR" and got to wonder if its one Ted has since made up, similar to the "C" engine, a "B" case mated to a "A" plastic tank?

"The BR although advertised was never sold in the 1950s." Is this the version Ted is referring too? 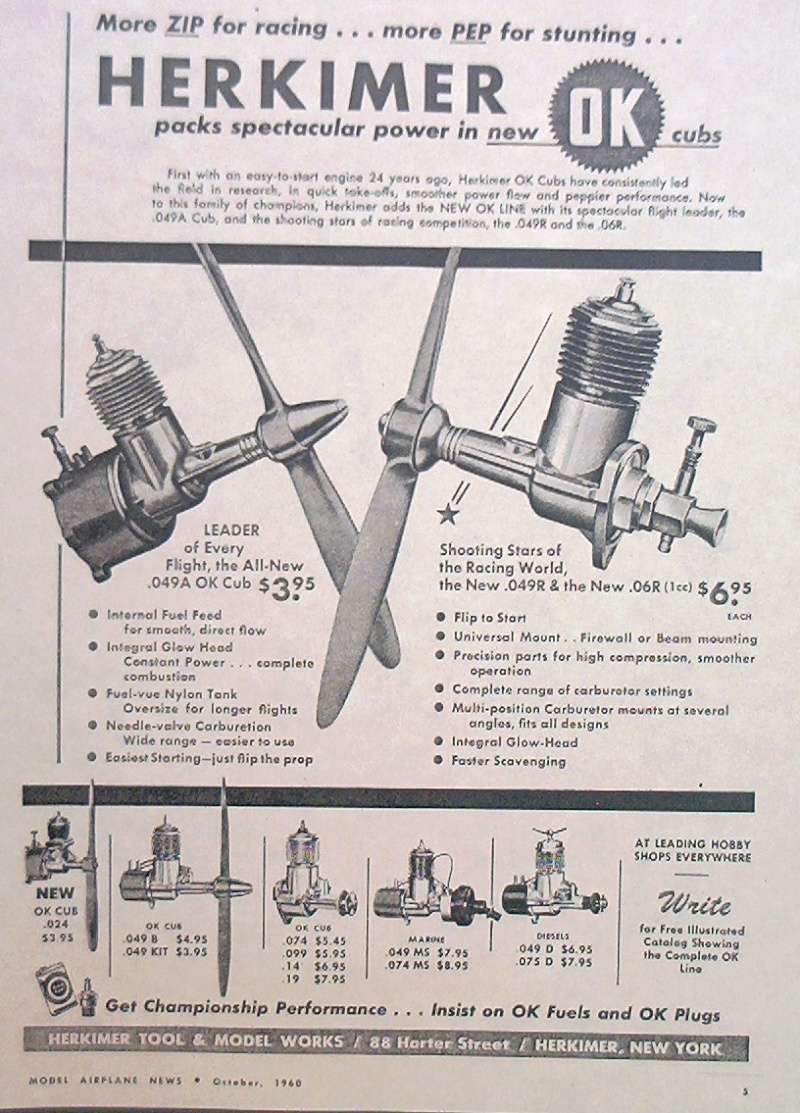 This engine really intrigued me for a long time, quite a mystery, until you find out and then...not so much. 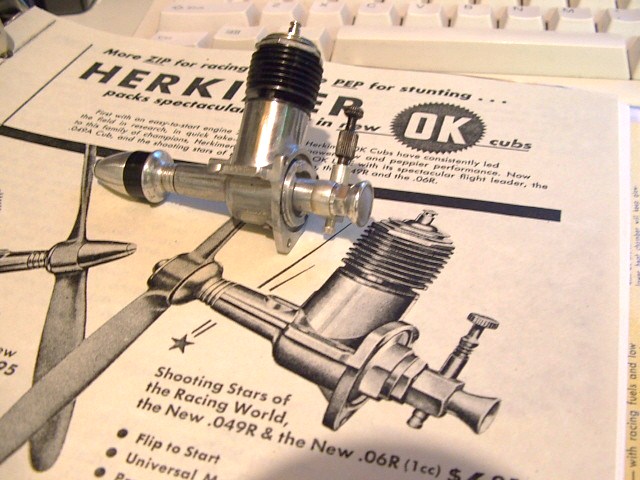 According to several Herkimer/OK experts I've talked to, the engines in the ad were never sold. But several people made versions like the one in the picture with COX parts. The BR's were indeed made by Ted as were the frvs mated to A tanks with an adapter plate, the diesels with brass heads, Mohawk Cub, etc. Ted had a HUGE supply of OK parts and worked hard at using them up in assembled engines of various types. Since they were made by the Brebeck family (Ted) from Herkimer parts are they OKs? I guess some would say yes, some no.

I consider the .025 a collector piece and don't expect anymore from it.

Another engine that Mr. Brebeck created that was not produced back in the 50's is the Cub .049C. It is an .049B front connected to an .049 tank by use of a metal connecting plate. Upper left: 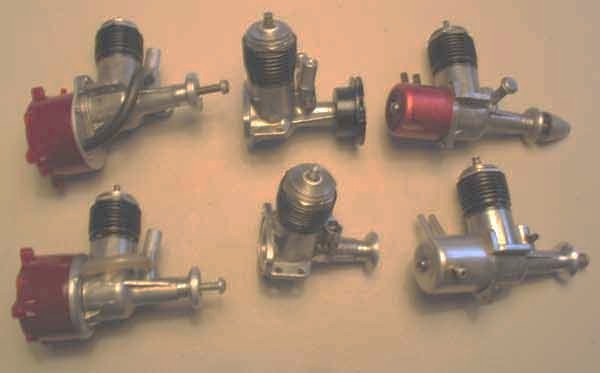 Interesting tool. Used for OK Cub cylinder removal. This is for the .074 and the .09. I do not have the other sizes. 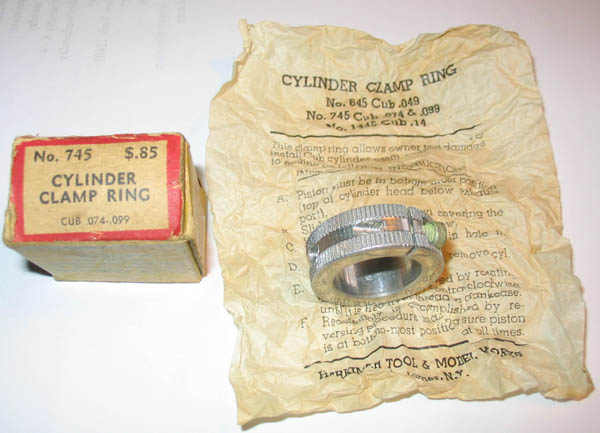 yep, these work pretty good, you still might to wrap a loop of masking tape around cylinder.

I knew I had a few of those Cub thingies! 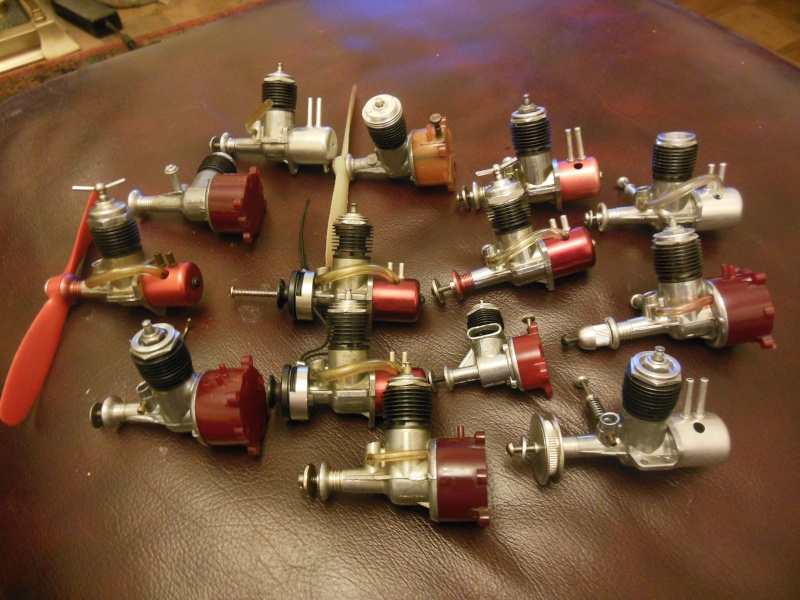 I like cubs too! I'll try to post a couple pix of one of mine. last year I decided I needed some front weight so I put an aluminum spinner on. In one flight it wore the crankcase slap out. Now the crank wobbles around. I need a new case and prop drive for a .099. 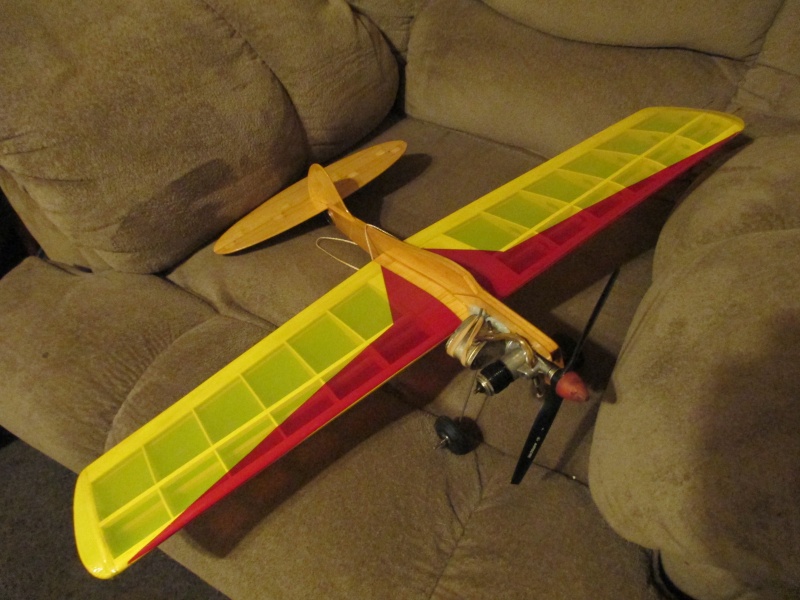 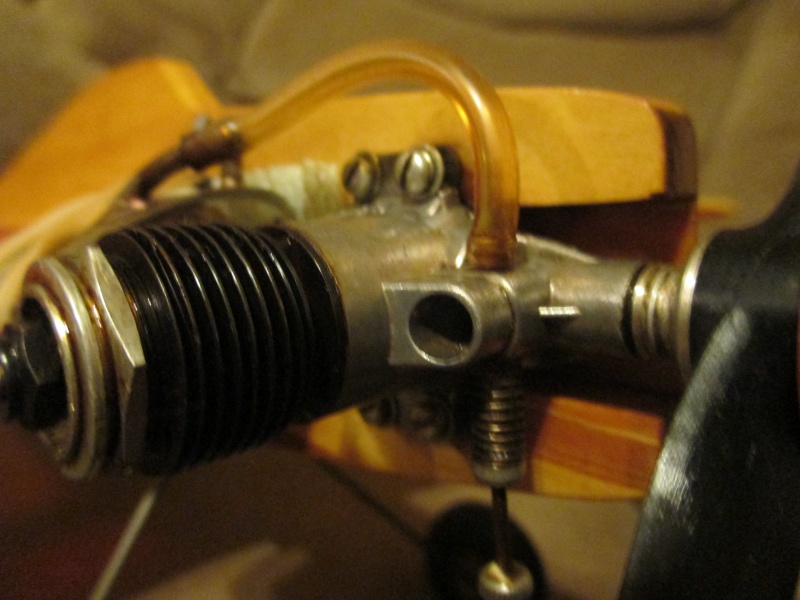