» question: gas powered cox or other 1/2a engines using the OS G5 plug
by gkamysz Today at 9:36 am

» Tarno carb operation
by OVERLORD Today at 8:55 am

» What are the differences (if any) between Cox .09 TD and Medallion pistons/cylinders?
by getback Today at 8:17 am

» Jerobee electric to glow conversion nr 2
by Cribbs74 Yesterday at 11:01 am

New never fueled airplane. No residue in the tank, in the fuselage, or on the engine. Some flakes around the fuel line nipple and that's it. Must have been one of those fuel line optional airplanes, or maybe Bessie the assembler was new on the job.

Not so much fun taking this thing apart. Four screws, everything comes apart and falls on the floor. All just to replace the broken horizontal stabilizer assembly.

Now I have to put it back together.

WoW what a mess from 4 screws , that would have been a disappointment for a new purchase and then have it come apart like that to install a fuel hose

..........Must have been one of those fuel line optional airplanes, or maybe Bessie the assembler was new on the job.

For some time COX had their stuff assembled in China...this qualifies to be a typical Chinese New-in-Box surprise ( I saw the same thing on many "Made in China" stuff some years ago when the world was rushing to employ the low cost China labor ...and dumped the world with rubbish...things are a bit (really a bit) better today.

Yes, it would have surprised the buyer when he pumped the fuselage full of gas. Might have upset him a bit.

So maybe this is a Nazi/Commie collaboration.

Maybe the assemble date could be determined by the engine - relieved cylinder, open port, with a #1 stamping. Under the wing it's embossed Made in the USA.

Whatever, it's an assemblers nighmare with over 40 individual pieces to put together.

This time it goes together with a fuel line.

Three rules about disassembling a Cox Stuka - Don't do it X3.

I'm a fixer upper, no appliance repairman has ever crossed my threshold. I have rebuilt British sports cars and defeated "The Prince of Darkness" and assembled untold numbers of firearms with less frustration than putting this little black and red nightmare back together.

But, it's not impossible. The old "If I can do it, anyone can do it" applies here. Unless a part is broken (see the broken horizontal stabilizer) I would just clean around the engine in place. But if you must remove the engine to clean/repair it, the following may help.

It comes apart easy, four screws and it falls apart. Watch out for the tail wheel, machine gun, cockpit assembly, bell crank and radiator. The engine comes out easy along with the fuel tank, and if your lucky it may even have an attached fuel line.

Yesterday I had the whole thing back together, but when inserting the next to last long engine screw, the pylon snapped. The screw itself wasn't tight, but Cox has a tendency to make these screws to long and they bottom out. (All screws are the same length, except for the tail end screw which is much shorter.)

OK, so I have been here before, broken pylons. The fix is to apply the red Testors cement to each end align and let tack dry then apply additional glue around the break and align both halves with a tooth pick. Note the to long screws.

Wrapping a rubber band around the front helps as you will have to expand the fuselage to insert the cockpit assembly (watch out it can go in 180 out), the machine gun, tail wheel and horizontal stabilizer support.

After using your third hand to get all of these parts in correctly, insert the middle fuselage screw ensuring the wing is firmly up against the fuselage as that screw holds it in place. Replace both engine compartment screws, I recommend shortening each by at least an eighth" and applying a little light oil to the threads.

Snap on each side of the tail support and separate the two fuselage halves slightly, insert the vertical stabilizer rotating it downward the inserting the short screw through the fuselage and the hole in the tail.

Snap on the rest of the stuff and your through.....

I still have to paint the canopy frame black. I don’t think I will ever fly it, just put it on the shelf to remind me of darker days.

But, if there was one you'd be a member!

BoB I am glad to see your having some fun now and you did a wonderful job !! I think I will stick to balsa after seeing that . It would bee easier to fix and I usually do have to

That is one fine looking hanger queen , Mark don't look out you will be nipping at his tail with your collection

That's a mouthful Mark.  You and Eric can be prez and vice prez and I'll be the mechanic.

I forgot to mention that the horizontal stabilizer support can go in backwards too.  At the last moment I noticed that there is a "F" on the top/front of the support which I imagine stands for front.  So that's the way I put it in.  Also it has to go in before the fuselage is assembled.

At first, I did get the cockpit in 180 out, one of the many times I had to take it apart again.

I think my recent involvement in things that go up/down and all around has sparked interest in my son again.  He went to a swap meet in Denver and picked up this Habu 180 "bind and fly" with lipo etc. for forty bucks NIB.

Habu video w/on-board camera. Sounds different than our little two strokes. Somehow this video reminds me of Kims flights. Back in the fifties the Skyraider pilots with contempt used to refer to jets as "suckin' air and blowin' smoke."

i like how your collection is growing, all war birds and all restores, nice! 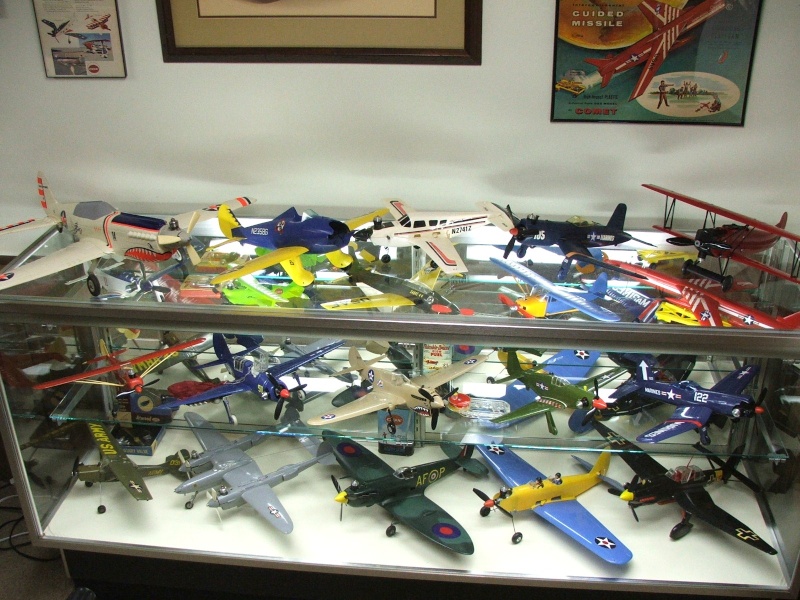 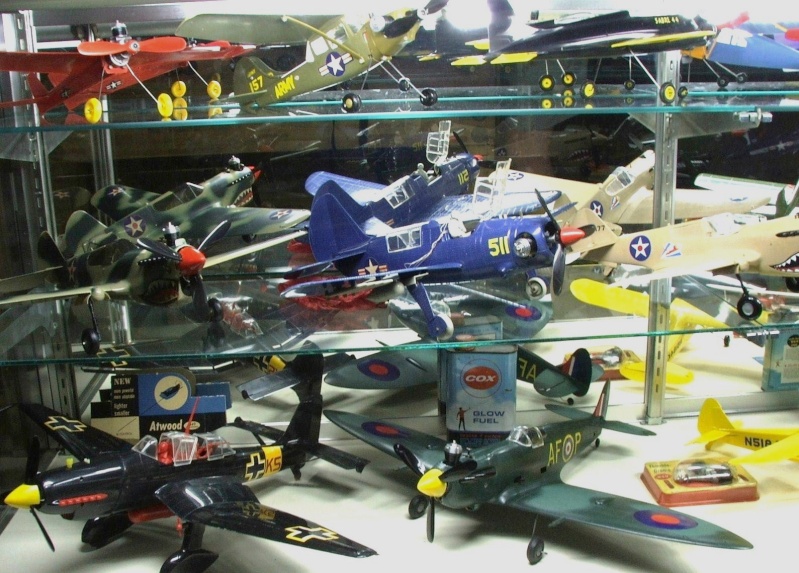 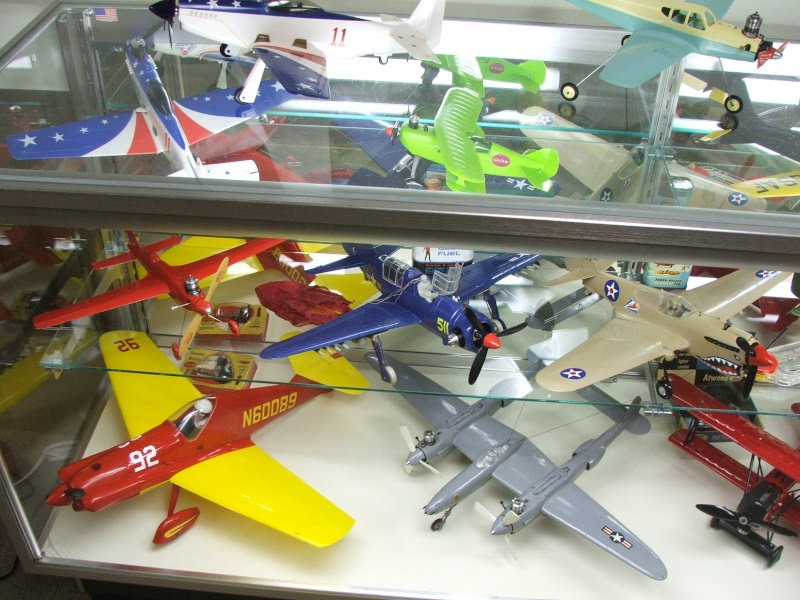 That large model is interesting, is it one of these?
What size is the engine? 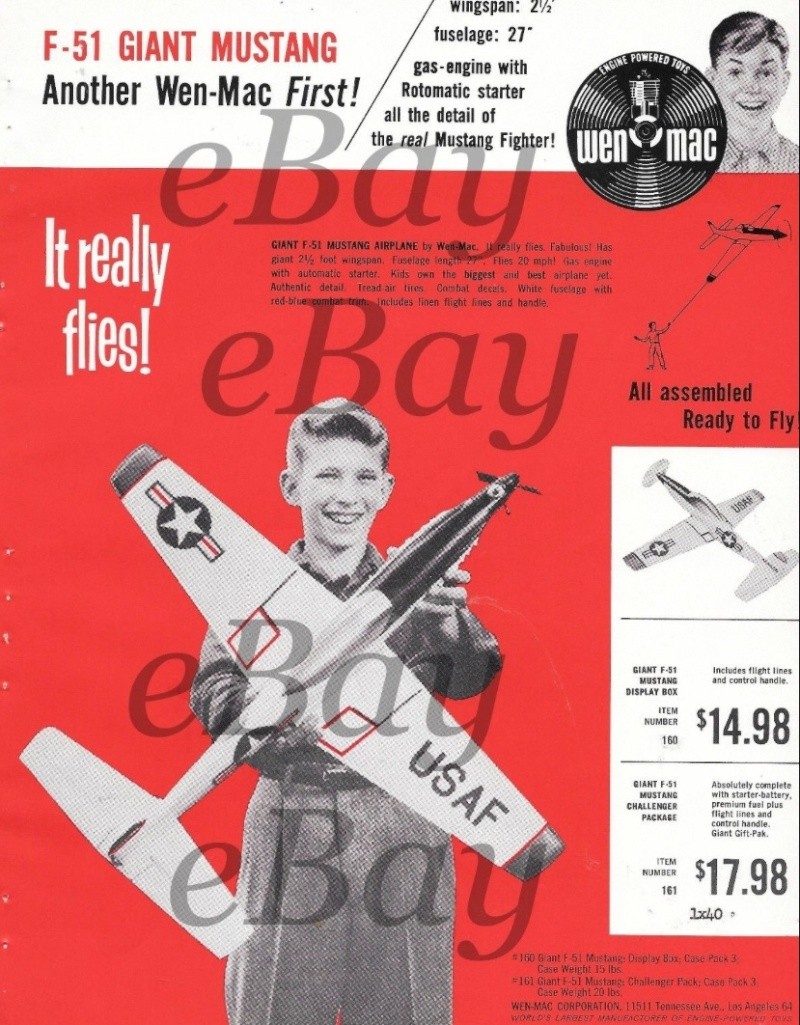 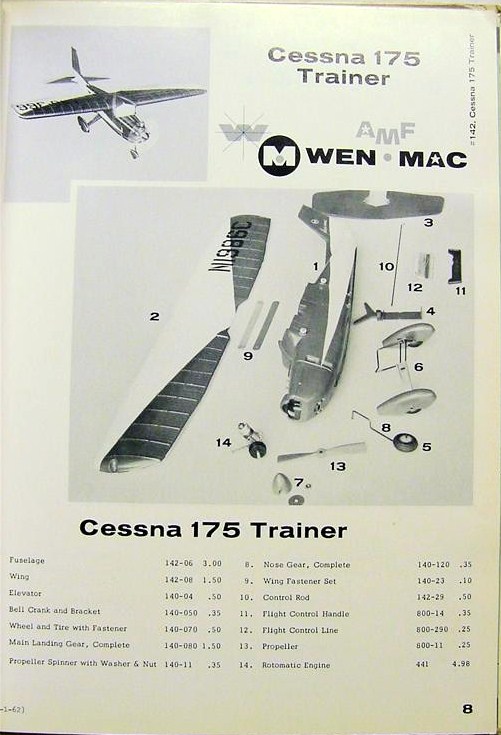 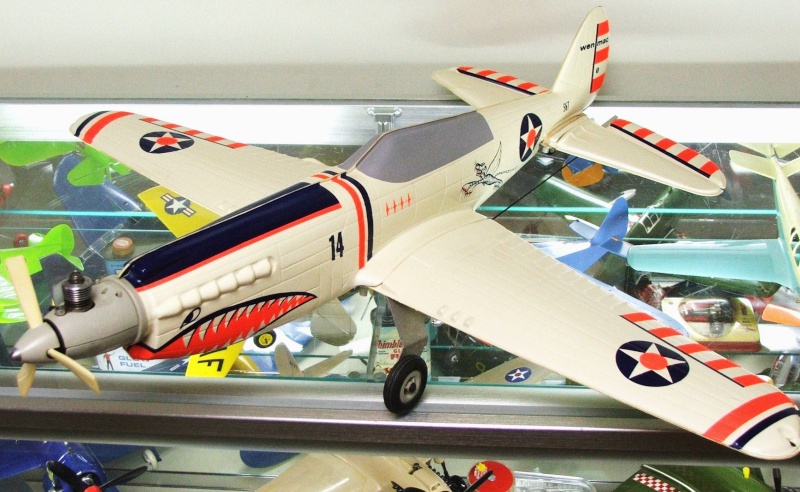 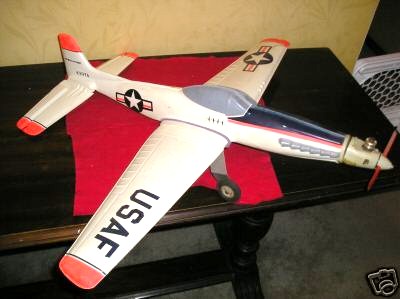 Damn that is ugly , what was the designer thinking = built a plane stick a NOSE on it with a engine

Bring that baby to the field for some laughs , wonder if it flew ? Is that a 99 or 98 on the front? That jet flew pretty well , looked bigger in the sky (cam) Getback

Nice display case Mark. My son had one very similar in which he showed his Mustang memorabilia. But he gave it away at my dismay to a friend as he's moving back here and thought it wouldn't withstand the trip. He was probably right, but I sure would have liked to have it.

I could ID most of your models, but the Cox Dauntless/Avenger (511) has me stumped. It looks close to both but no cigar to either. I thought the inverted colors - blue wing, yellow fuselage PT-19 interesting.

I have been letting go by the Wen Mac pea shooters on ebay, but that's one of my -have to haves.

No fuel line, eh. My "How I got started..." story begins with bringing home a P-51 Mustang that I bought at Western Auto and could not start. I remember it would light off a prime every time, but even after Dad came home from work, we flipped and primed hundreds of times and that's all it would do. In my story, I interject that I'm sure I could start it today... maybe not, if there was no fuel line. When Dad returned it and went to the hobby shop to get another model, the salesman at the store said he had heard of that happening more than once. Enter the Stuka. Starting easily on a couple of flips was the next to worse thing that ever happened to it Lol.
Rusty
_________________
Don't Panic!
...and never Ever think about how good you are at something...
while you're doing it!

Yes Rusty,  it might have been comical to see the buyer try to fuel the thing.  I like the visible exposure of the fuel tank open inside the fuselage, a nice feature of these Stukas.  It's got fuel line in it now, but I hesitate to run it.

Ok, neither Avenger or Dauntless.....Helldiver it is....

This is actually the same plane I've owned since early seventies and actually had the antenna for years, it broke off and i set it some place, but i thing it disappeared twenty years ago. 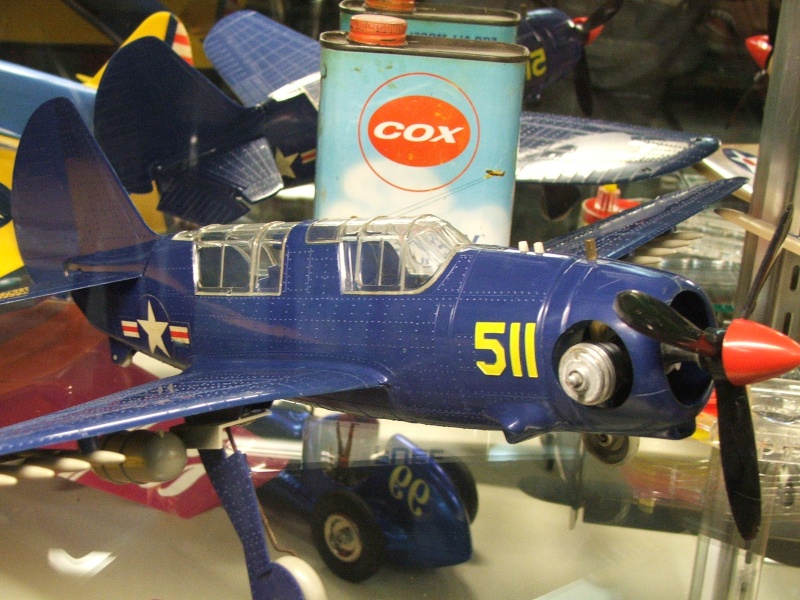 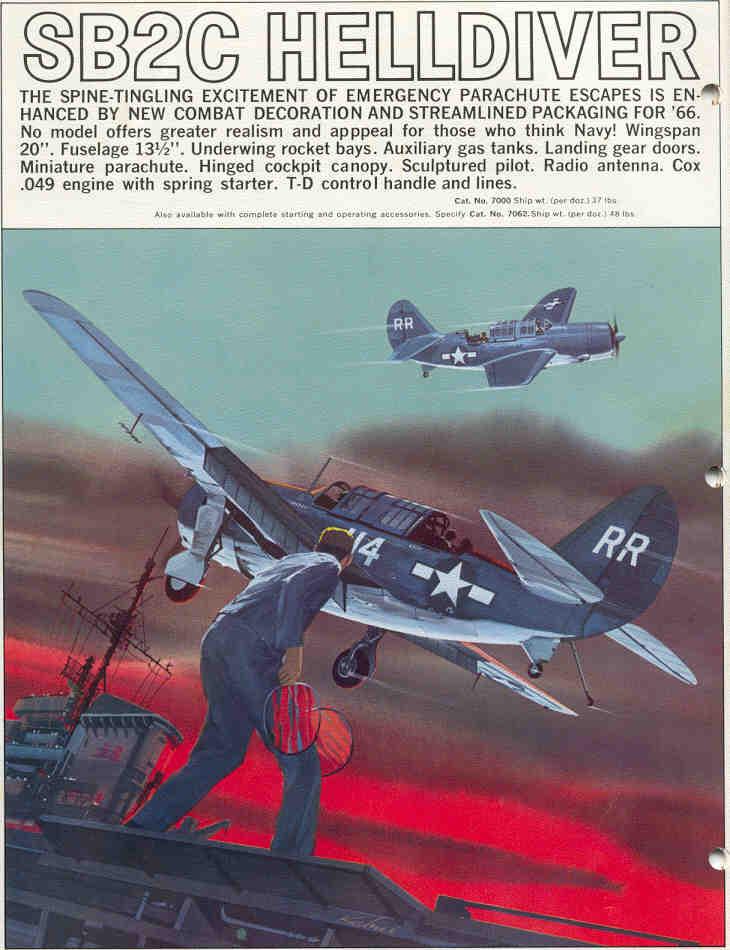 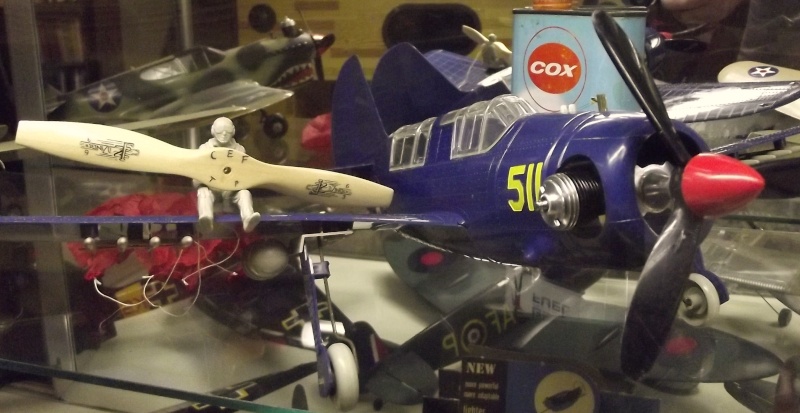 I found the antenna to this Stuka on the garage floor several days after I unpacked it.

I thought it was missing and looked for a replacement on ebay. It must have fallen out of the box as the accessories were loosely packed. I think it's supposed to be red and the PO painted it black.

I wonder if it would be possible to straighten out the rudder with heat and convert one of these to electric. I hardly ever use rudder to land my RC FMS Stuka anyway.
I've flown the Cox Stuka in the 60's as a kid. One day my young friends and I decided to try launching a Cox Trainer with its elevator fixed in the up position just to see if it would fly on its own in a school parking lot. It did for quite a while, heading straight for the school, crashing into it if my memory serves me correctly.

Buddy1065 wrote:I wonder if it would be possible to straighten out the rudder with heat and convert one of these to electric.

You could but why?

One day my young friends and I decided to try launching a Cox Trainer with its elevator fixed in the up position just to see if it would fly on its own in a school parking lot. It did for quite a while, heading straight for the school, crashing into it if my memory serves me correctly.

It would be interesting to remove the lines, dial in alittle up, leave the rudder as is, and see if it would fly around in circles. Im not sure how well balanced these are east/west though.

Welcome to the forum.

I also think it would be neat to convert one to R/C...i got a crappy Wen-Mac Corsair that doesn't have much value. I don't know what would be better, something like a Super Sport/Rivets type with a lot of wing area or something small with a stiffer wing? I guess you'd have to see what had the lightest wing loading and stiffest wing. Either way a crash is almost guaranteed.

I was gonna mention that the antenna should be red, i hope the guy painted it and its not a repro. Those antennas are pretty scarce, in fact there was a guy on eBay making reproductions.

The Helldiver is pretty neat, it had a third line to pull and release a flat metal spring to eject the pilot w/ parachute.