Log in
Search
Latest topics
» The resurrection of the frankenplane
by rsv1cox Today at 7:57 am

» Ringmaster rescue
by rsv1cox Today at 7:49 am

» music vids.. some of your favorites
by cstatman Yesterday at 5:42 pm

» Just HOW do you test compression??
by Surfer_kris Yesterday at 1:15 pm

Perhaps more for the newbys than the seasoned old pros here.

I recently added six more various Wen Mac engines to my already extensive stash and decided to dismantle three of them completely.  All were locked up with old castor.  Popped all three in the toaster oven at about 250 degrees for 10 minutes.  Removed using a leather glove, added a wooden prop and all three loosened like magic.

One would wind against the spring and recoil but would not operate in a proper counter clockwise direction.  Using a couple of screwdrivers on opposite sides I pried off the forward drive plate exposing the cam and the spring.  Max gunk, cleaned that up and reassembled.  Still no counter clockwise function.

Looking closer at the forward drive plate I noticed that it is actually a sandwich affair with a paul of some sort between the two outer pieces.  Hmmm, I thought it was a plunge and release mechanism, but it's actually a slip ring affair.

I heated the plate, soaked with Rem oil and finally worked it loose with a whole lot of gunk being expelled from inside the plate.

Put everything back together, added a prop and it works like new.

You need to be real careful when removing these that you don't dent the inner plate on the clutch mechanism, or it will lock and refuse to free-wheel, even with a small dent. Also when assembling, be sure to line the pawls up with the cam to which the spring attaches.

I can see how that could happen Rod. I wasn't particularly careful when removing the outer plate thinking it solid and got lucky. I would like to make a couple of hardwood wedges to use in the future.

I found that if I were careful I could feel the pawls align with the cam before using the prop and drive nut to seat the assembly.

I hope that you received my PM regarding your Mom.

I have two or three of those models with the V on the side and they run pretty good, about like a Babe Bee single port. I dont use them for much, but There neet. My wife has one on a little wizzard.
Phil

Thank you. I had acquired one of these, but had never known what the big black discs in front were or what they were for. I will now go and try mine out to see how it works. Should I just wind the prop clockwise from the front a turn and see if it goes? Thank you.

It takes a couple of turns clockwise to wind the spring, it will stop when fully wound.  Watch out when you release, the prop has a nasty way of finding a finger.

IMO Wen Mac's system beats the Cox afterthought spring.  There is no engagement to worry about, just wind and let go.

Well Cox did introduce a similar wind back starter, but they were taken to court over it and forced to remove it from sale, I believe. The wind-back version has become rather valuable from a collectors perspective.
The earlier Wen Mac starters with the rivited spring were fairly reliable, but the later Testors ones changed to a hook end on the spring and they were very fragile. They are truely "no-drag" starters because the pawls disengage with centrifugal force so there is virtually no friction at all. But they are probably a little heavy, with quite a bit of spinning weight in the clutch. 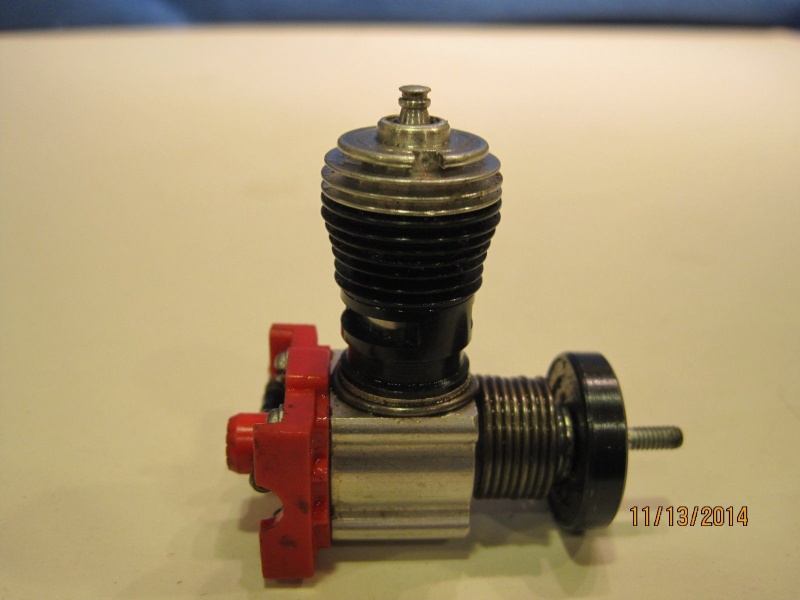 Thanks for the help and advice. I carefully used a screwdriver and separated the two halves only to find out that the spring is broken at the rivet near the shaft side. So no more worrying about how it works for me, as it doesn't.

@Oldenginerod wrote:Well Cox did introduce a similar wind back starter, but they were taken to court over it and forced to remove it from sale, I believe.  The wind-back version has become rather valuable from a collectors perspective.
The earlier Wen Mac starters with the rivited spring were fairly reliable, but the later Testors ones changed to a hook end on the spring and they were very fragile.  They are truely "no-drag" starters because the pawls disengage with centrifugal force so there is virtually no friction at all.  But they are probably a little heavy, with quite a bit of spinning weight in the clutch.

I don't think it ever went to court, they were likely sent a cease and desist from Testor's attorneys. Cox stopped production sometime in '72 and scrapped the remainder of starters.

Ok, now since my spring is broken on my starter, is there any way to remove the assembly from the engine as it is dead weight, or should I leave the starter assembly on anyways. Also, could someone please tell me as to what size prop is best suited for a MK III .049 engine, as well as what to drill the prop hole to. Thank you.

My experience with the early types of wen macs is limited, but here is what I have found. The performance of these engines varies from engine to engine. I would experiment with 5x3-5x4, then 5 1/2x3-5 1/2x4 props, and drill to .161-.166.
If the spring is broke you can rob one from a pipe bomb. Even though the starter housing is smaller on the bomb, they work for me. If you decide to run it as is it is a good idea to remove the prop drive and remove the sleeve under there. You dont want it spinning around on the nose of the crankcase. Also I have found these engines to be sensitive to glow plugs. I have had them go from barley running to good performance and everywhere in between just by plug changes.
Phil