Log in
Search
Latest topics
» New Space Bug From Parts
by getback Today at 8:24 am

This week, I ran my Enya 19 VI B engine with a 8x4 prop. i used fuel with 10% nitro and an Enya nr 4 plug. when I bought the engine, it was fitted with a fixed venturi with the wrong diameter, too small for the carb hole. To replace that, I mounted a Just Engines 2 needle caburettor. The output shaft has a 1/4" thread while the plain bearing engine I have has a M6 thread. 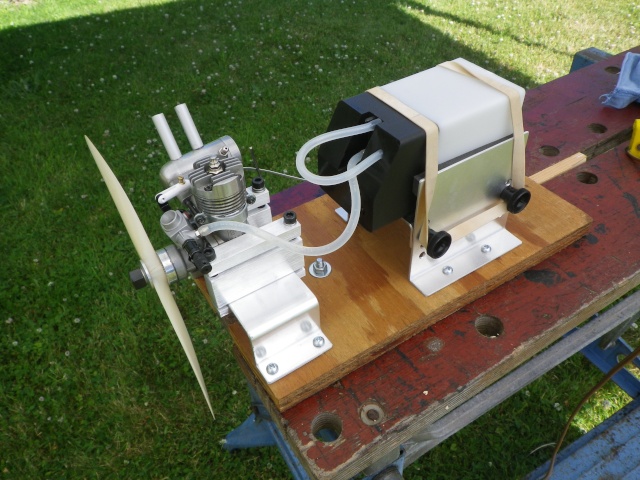 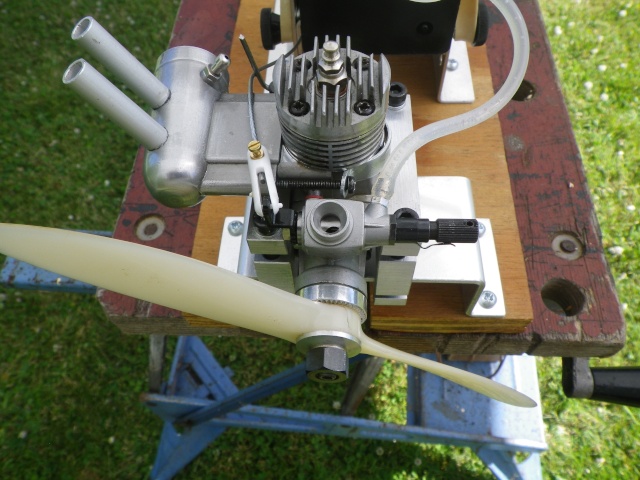 To start, I opened the main needle 2,5 turns. The engine ran ok on tick over but when accelerating, it did not rev up past half way the barrel opening, and after 10 or 15 seconds it stopped. After several trials, the engine ran at full speed with the main needle opened at about 3 turns. I found that when revving up, the change from the idle jet to main jet was not very smoothly. Could that be the idle needle not being set correctly? Maybe to lean?

Lieven, just a thought, if not ABC, your engine may not be fully broken in yet. I think that may be why it is stopping. I put at least about 1/2 hour running on mine a couple minutes at a time on a 1 oz. tank. Used a 9x4 prop for break in. These Enyas take some run in before they are broken in. Need to be broken rich.

I'd flip the muffler over (if it doesn't interfere) for better oil draining. You got the small choke venturi. Instructions state prop range 8x6 to 9x4. I'd try a 9x4. Correcting idle mixture might help with transition.

Wanted to add, my plain bearing .19-VI TV has a fairly small venturi opening in the carb barrel. 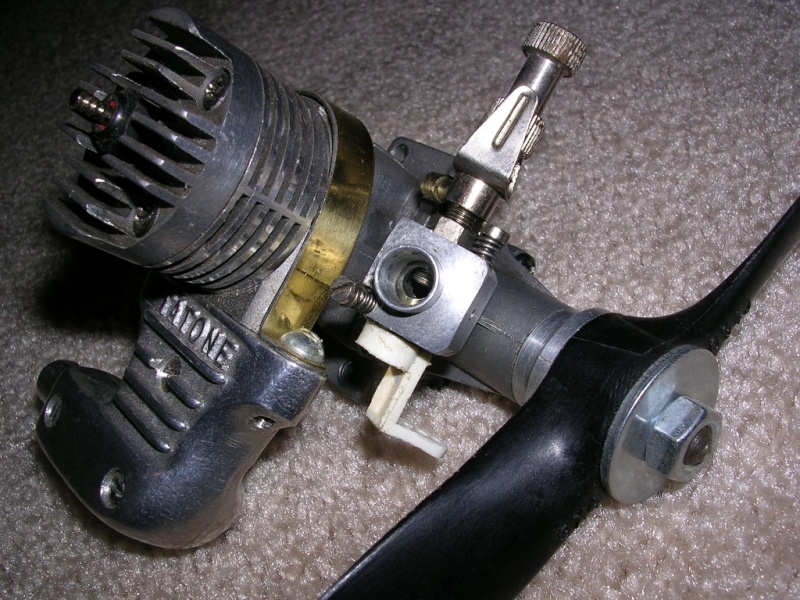 Not saying your carb won't work, but might be sized for a Schneurle engine. My Magnum .15GP and .25GP have larger venturi openings than my cross scavenge .15 - .25 engines. Cross scavenged engines don't rev as high as Schneurle but produce their thrust with larger diameter or steeper pitched props at lower revs.

Thanks guys for your comments. I know they need some time to break in. The engine had bolt marks around the mounting holes when I got it, so I assumed it had run before. The venturi of the Just Engines carb is 5,2mm diameter. I don't know what bore the standard  carb has.

Lieven , ,the pdf file George sent has the venture sizes posted above where it says performance At 6.8 and 7.3 mm I don't know that I would assume the engine to be broken in Enya's can be a pain till they are ,, my 29 came with 2 difft. size venture sport and performance . Eric  do flip the muffler so to drain after burnt nitro

after looking back maybe the engine was to be ran upside down with the pipes pointing down ? do you have another muffler to try ?

Hi Eric, I built the muffler myself. It was a standard Enya 19 muffler. I cut off the cone and pressed a coin into what remained of the cone plug. I drilled and tapped the muffler to fix both pipes. 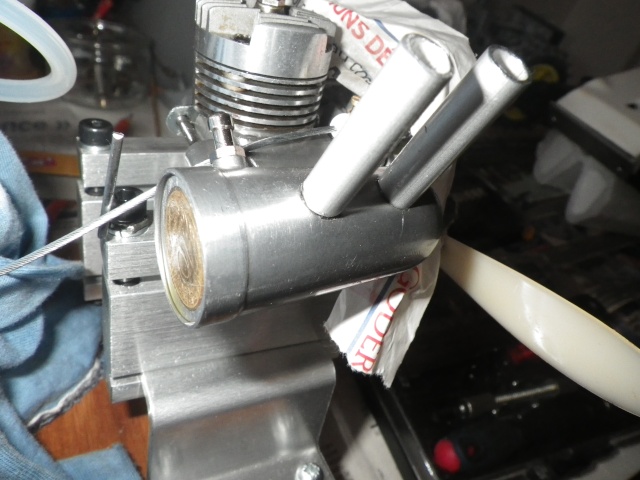 The engine will be mounted into a Mardave Marauder to replace the worn Irvine 20. The Mardave muffler doesn't fit to the Enya engine, so I had to make one that looks a bit the same. To get rid of the oïl, I will drill a tiny hole at the lowest point of the muffler. The original Mardave muffler hasn't got a hole though. 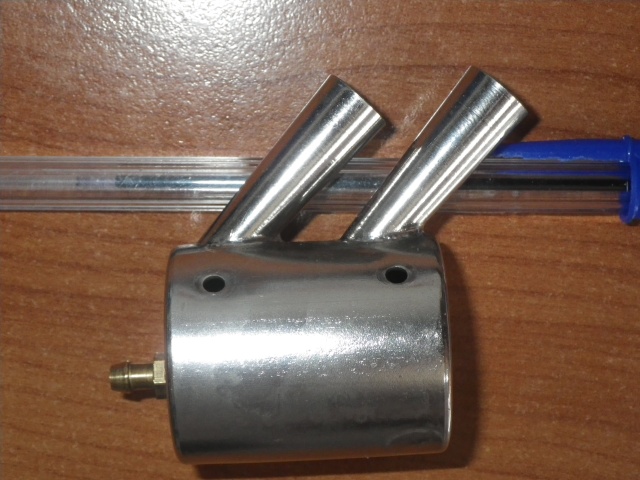 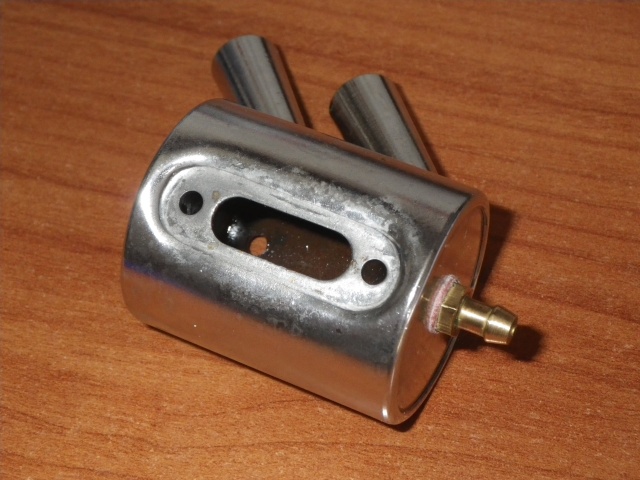 Lieven, one thing I can say in regards to the Enya engines is the fact they dislike mufflers severely. I don't know what your intent is in using this engine, but in my control line experience, none of the stock mufflers work PERIOD. I don't care what anyone else has to contribute in regards to my comment, I can say with lots of experience that they don't work for control line. The liners in these engines are very thick and heavy and quickly heat soak making them problematic to start and quick to sag when they overheat. Your design muffler looks cool but I can see issues there in regards to overheating.

It sounds to me like your explanation is that the engine is running for short brief periods and is quitting. Your using a #4 Enya plug which is typically used with higher nitro fuel . A # 3 Enya would be a better choice due to it's heat range. The #4 likes a bit more nitro 15% and up even though they claim 10% is a starting point . The Just Engines carb is a Magnum/ ASP carb which if you Google you will find that there's been several problems with that carb. It's notorious for air leaks around most of the areas susceptible and I've already seen some of the fixes for it. In wide open throttle the low end mixture screw is taking out of play and the engine should run like a conventional control line engine with the throttle locked open using the main needle. If your throttling the engine and it's quitting, it's obvious adjustments are needed to transition properly from idle to full throttle. My concerns would be the fit in the venturi and if the O-ring is being properly compressed by the retention screws and that no air leaks are present in or around the venturi stack.

In addition, it's 100 % imperative that the bolt on front end of the Enema is tightened properly and is SEALING. If not, the engine will die due to vacuum leaks.

I have to also make mention of your prop. That appears to be a old nylon prop. I wouldn't trust that at all. I used to use stuff like that myself until accidents happen. One of my fellow flyers had one of those props go right through his cheek when the blade came off. He now has one heck of a hideous scar as a result. All of us mentioned what could happen prior to that run and it was dismissed as irrelevant. Be careful. Ken

@getback wrote:Lieven, the pdf file George sent has the venture sizes posted above where it says performance At 6.8 and 7.3 mm I don't know that I would assume the engine to be broken in Enya's can be a pain till they are, my 29 came with 2 difft. size venture sport and performance.

Enya has a fat diameter NVA, which would reduce the mean effective cross sections of the 6.8 and 7.3 mm dia. venturis.

Lleven, have you tried after peaking top end needle, adjust for best idle with idle mixture screw? Might correct transition cut out due to mixture off at lower end.

@Ken Cook wrote:In addition, it's 100 % imperative that the bolt on front end of the Enema is tightened properly and is SEALING. If not, the engine will die due to vacuum leaks.

It is apparent your dislike for Enyas, but was this reference necessary?

I think you are running a too small prop. These old-shcool engines usually don't like to run above 15000rpm.
A 9x4 prop, or even larger, is better suited and will likely cure the low-end issues too (the load is currently too low).

I didn't find what type oil you are using in the fuel, try 25% all castor and the running will improve due to a better piston cylinder seal. 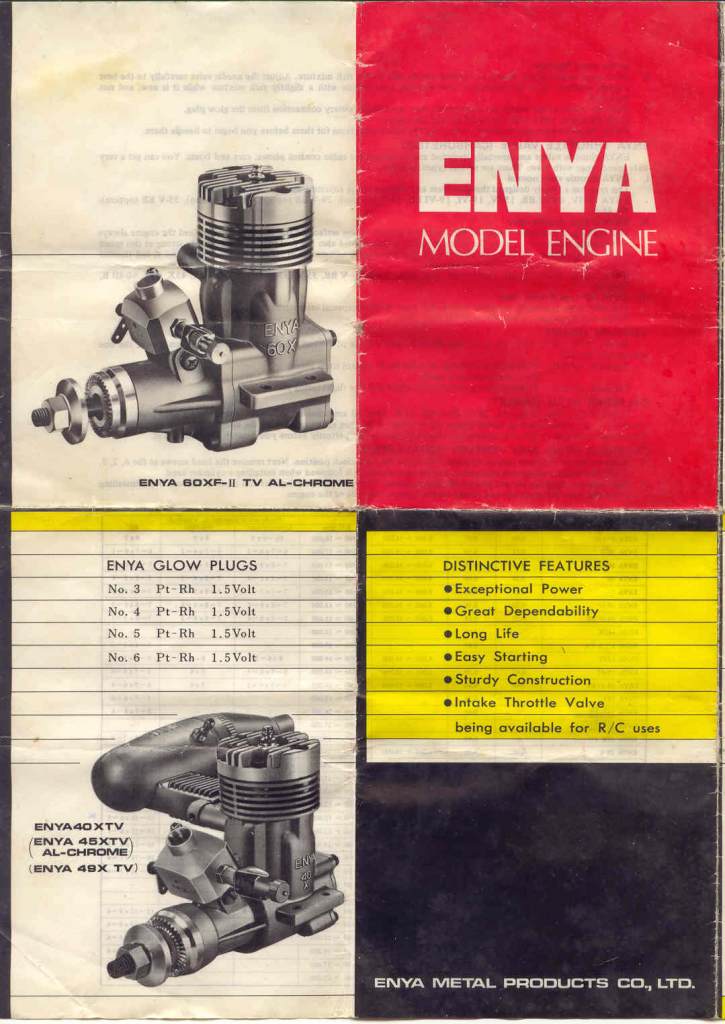 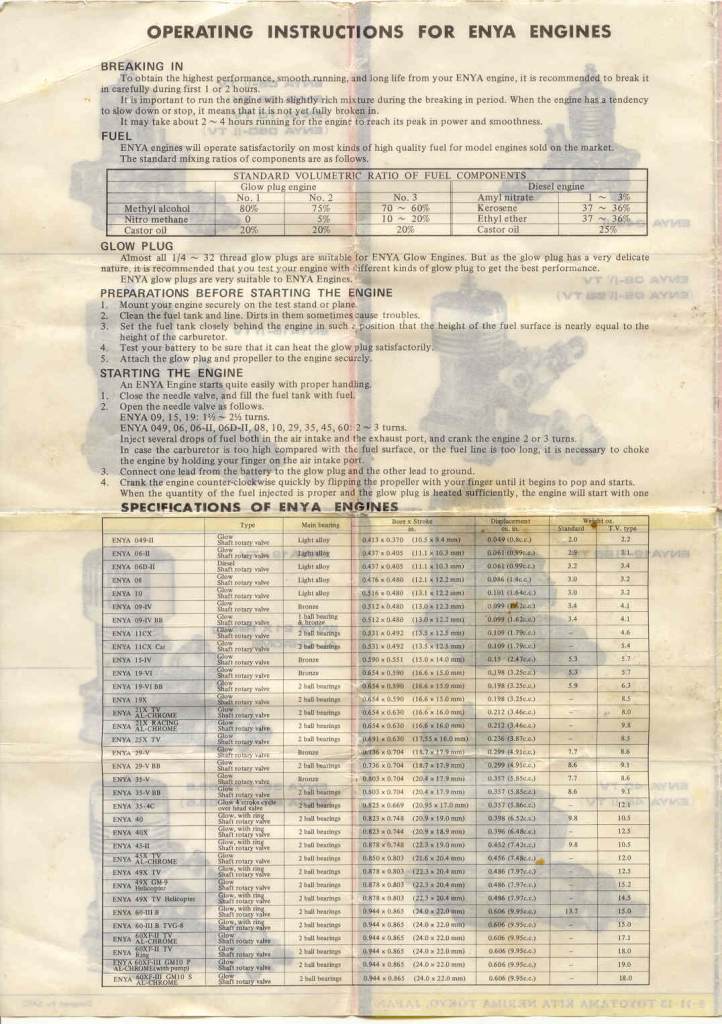 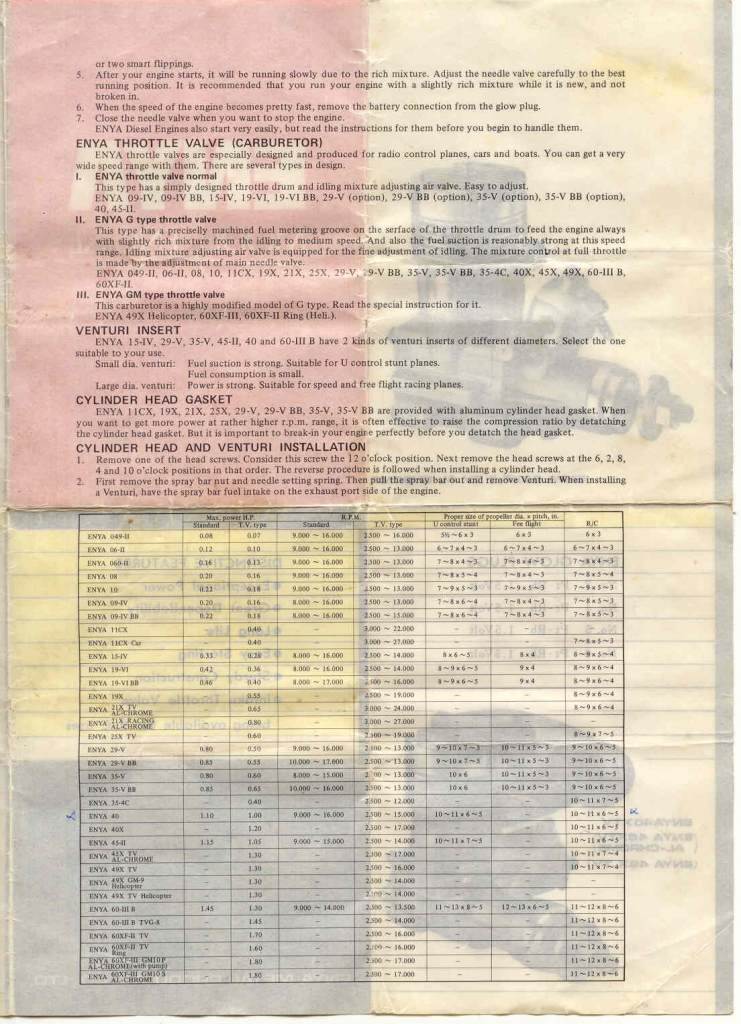 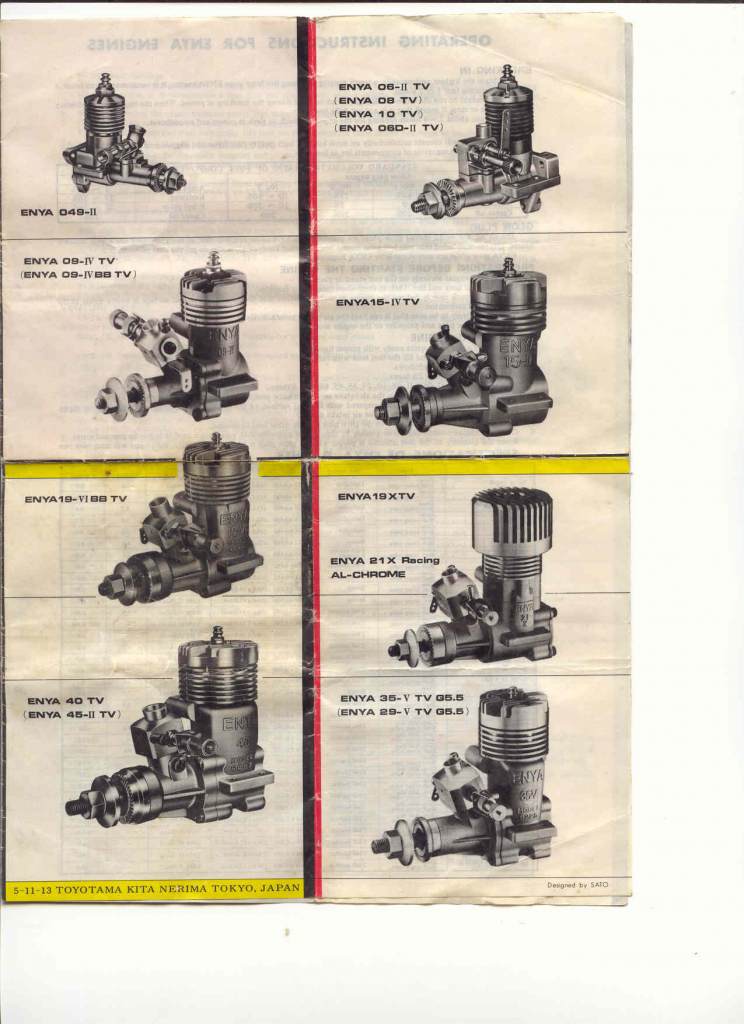