We followed our new late afternoon flying schedule. Man, we should thought of this a long time ago for DST season. Very pleasant in the late afternoons.

I took the Rescue Nobler to test fly, the Oriental, and the Baby Flite Streak, BFS II with the Norvel .061. Jim, the president of Jackson Flyers gave it to me when I joined in August 2012 and it's my best 1/2A flyer. Ron Cribbs flew it when he was here Last Fall, and I think was quite impressed with the Russian Big Mig. I thought Jim would enjoy watching it fly, it's really spectacular and today was prime 1/2A weather. It really seems to like the Glowplugboy fuel. I test ran it at the house since it had been hanging for so long, and it cranked on the first spring flip and tached 26k with a 51/4x3 MA prop.

The prime directive today was to test fly the Rescue Nobler https://www.coxengineforum.com/t8573-the-rescue-nobler
I had a new line set and new Tom Morris cable handle just like the one I use on the Oriental. This is a very good handle that comes unfinished so you can fit it to your own hand.  A little sanding, polyurethane and grip tape does the trick.

I knew it was going to be nose heavy, but it was Way heavy. The whole thing weighs 42.5 ounces, so pretty good in that respect. It really didn't want to turn. My first inside loop went up to about 70 degrees and I was worried if I had enough air to finish. I did. So I did some climbs and dives to get the feel of the controls. It was also a bit too rich, but still breaking 2 in the climbs.

When I padded the fuel tank I didn't realize I was blocking the engine cooling duct. For this flight, that was good because it sped up pretty soon after my loops and had enoufg authority to tighten up the maneuvers and I did some decent square loops and triangles, bailed on both the second half of a figure 8 and a vertical 8. After landing I gave it a few clicks leaner and added 1/4 ounce of lead in the tail. My Eric Rule tongue muffler will be here Monday and that should help too. I'll also widen the line width at the handle. It's very slow responding to control inputs, and pulls like a 10 pound sack of potatoes on the lines. However it's very stable and graceful, and my shapes and pullouts were great. When the power cuts it still drops like a brick, but that's just the balance issue. My landings weren't horrible, so that's something. When I get her trimmed, I think I'll be able to fly it as well as the Oreo, maybe even better. One other thing, the power plant is my old 35fp that was on the Ray Copeland Skyray that I first began learning PA with after the Shoestring. This is the most well behaved engine I have ever used, So easy to prime and crank, it always lights off within 3 flips, even on a 97 degree day like today. It's fed by a Dubro 4 ounce clunk tank. So I have a competent backup plane that I think I'll be really happy with.

Wayne was still getting the feel of his old Smoothie. It's the Brodak Prototype ARC that Bob Zambelli built, who knows when, and it is the first Brodak ARC Smoothie that ever flew. It's beautifully covered with dope and tissue. The power plant is a Brodak .40 that's just as stubborn to crank as my 40fp. I always use the electric on my 40, and Wayne reluctantly used it today on the B40.

After three flights on the Nobler, I rigged up the Oriental. The wind had basically quit, so I had to remember to step back as I went through maneuvers to avoid crashing in my own wake. My 10.8k RPM sweet spot that I've mentioned before is perfect when there is a breeze, but not enough speed for dead calm. I couldn't make the climb into turn 3 of the clover, or the exit wingover after turn 4. So for the next flight,m I gave it 11K RPM and it was great. I do need to cut a cooling vent in the cowl for when it's in the upper 90s, but later in the day, it maintains its beautiful 4-2 break right up until the end. But when it's hotter under the high sun, it starts winding up too fast after about half the pattern. A vent will likely solve that problem.

So we got in a bunch of flights and I can see Advanced coming within a season if I can just learn to land the damn thing, and fine tune bits and pieces here and there. I may have a setback for hopefully not too long, but I'll be having surgery on my cervical vertebrae soon to relieve some arthritis related bone spurs pressing on my spinal cord. That explains a lot that I've just assumed was old age. It should stop my stumbling when I'm looking up and behind, like in my OH8s. I really should avoid looking up too far, so I'm trying to arch my back more than bending my neck. It's very possible that I will not be able to fly in the Carolina Criterium in October. This is too dangerous to back burner... as much as I'd like to. This is the first I've mentioned it anywhere in forum land, and I hate to drop a bummer as my closing note, but I figured y'all should know. If I drop out of site unexpectedly, I'll try to get a message to y'all somehow, but don't worry, I should be back. Right now there is no schedule, still seeing doctors to get ready. In 2 weeks, I'll know a lot more regarding the time frame.

But I'm flying till I can't! That's always been my plan and still is.
See y'all in the funny pages,
Rusty 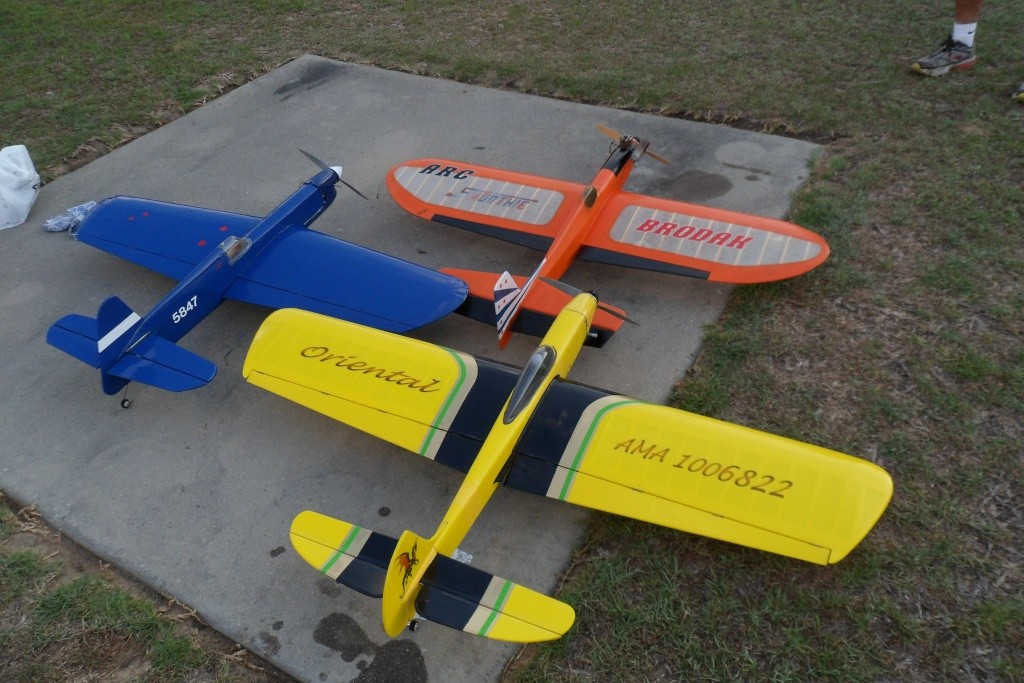 Glad you had a good day, even if the Nobler was a slug. Trimming...wee!

Hope that surgery works out well for you, I am sure it will.

That brings back some memories. I flew that Smoothie years ago with the very first Brodak .40 made. Bob still has that engine. It was certainly done very nice and it still looks good. Ken

Good Report , Rusty , Sounds like another Fun Day of flying , Yea that late afternoon is the ticket when its 90+ outside . Having a flying partner really make things go easier and have great fun in the mean time , I am hopeing to get that tree out of the field today (get the boy to help while he is here ) . Flight 'em high and keep the lines tight everthing will bee alright

Thanks for another wonderful story and report.
Best of luck with your impending surgery -- hopefully, you'll come back soon and better than ever.
a--

Ken Cook wrote:                That brings back some memories. I flew that Smoothie years ago with the very first Brodak .40 made. Bob still has that engine. It was certainly done very nice and it still looks good. Ken

Ken, that plane will snap a corner with the best of them. It was flying just a tiny bit, barely visible, tip low, upright and inverted. So we opened up the weight box and there was one 7g slug in it. We both thought that was amusing. And Wayne's new Smoothie ARF was the same way when we trimmed it. We were surprised then too. I remember trimming that plane, we took them out one at a time until we took it all out, and it was wings level up and down. But we talked about it with Bob's plane and decided to leave it in. It's not hinging at all and I thought maybe that extra 7g would make it more stable in the wind. There was none yesterday. What do you think of that idea?

andrew wrote:Thanks for another wonderful story and report.
Best of luck with your impending surgery -- hopefully, you'll come back soon and better than ever.
a--

Hey Andrew, I'm always happy to know you're reading my reports. I enjoy writing them but sometimes worry that people would prefer more brevity. Thanks for the well wishes. Y'all all probably know I'm a very experienced veteran surgery patient, so I'll have my act together with my wife refereeing doctor teams and looking out for me. I owe my current well-being to her. This one is a bit scary with the spinal cord involved. But as always, I'll lean into it and keep on truckin'... as long as they don't drop a knife and sever my main data trunk. Lol... I always hope those bastards had a pleasant morning with sex and a hearty breakfast. Oops, can I say that on CEF? I'll grant myself permission this once.

Okay, enough of that rot.
On the Nobler, I plan to remove most of the padding between the tank and bottom cowl extension which serves to enclose the tank compartment. Hot air should pass through and keep the engine cool and on song. I'll have to make an I-beam to retain the tank and brace against the cowl, providing twin tunnels for the hot air to flow and exit at the opening just fore of the landing gear.

Rusty, for that size plane 7g is very light. I would add weight until it started hinging and remove one. Personally I would keep a minimum of a 1/2 oz. in it at all times. Why it's tip low upright and inverted is a bit puzzling. If adding additional weight doesn't make the wing drop further, I wouldn't worry about it. Many of Bob's planes were painted with Randolph dope which he had excess of from refinishing one of his real airplanes. The Randolph he was using had a very high shrink rate and combined with the silk he was using the frame work would implode. The Smoothie if I recall was the same dope but it had silkspan finished clear only. While I can't explain the flying characteristics, I will say it's not uncommon to experience a warp especially with the age of that plane currently. However, you know what they say, if it aint broke, don't fix it.

Ditto what Ron said:  Sharp-looking set of planes there and best of luck with the surgery when the time comes.  Bless you for rescuing the Nobler... I was just reading that story the other day.  We rescue Pugs down here in FL.

Don't touch that dial!
Thursday afternoon is our next scheduled expedition. Same 3 planes for me, newly air cooled and balanced Nobler, Oreo, and BFS II. No telling what Wayne will bring.
Rusty
_________________
Don't Panic!
...and never Ever think about how good you are at something...
while you're doing it!

What is the Oreo?

I must have missed something.

Cribbs74 wrote:What is the Oreo?

I must have missed something.

Similar topics
» Excellent Fort flying, 2-19-17
» January at the Fort - Time to try flying again
» Sweat in my eyes, Fort flying Sunday 8-14
» Another year flying at Fort Jax is in the books!... or maybe it's next week
» CEF makes another visit to Fort Jackson - good discussion