This is the most comprehensive and well presented Laser kit I have ever seen.

He does not show the 1/2a Stuka kit on his web site, so a call or e-mail are how you ask for one

Photo of the Kit

Here is the kit photo 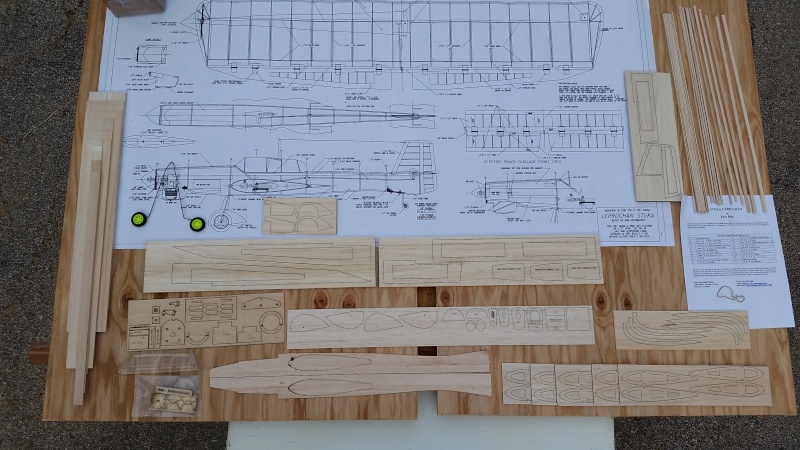 RSM kits do not supply hinges as too many builders have a different favorite
No ste by step build instructions; there are notes on the plan and the call out of particular size wood

Poor photo and I don't know how to post a zoomable image. sorry

On the plan is .061 Glow..an inset showes the (included) parts to make it electric, I assume for electric one of the RSM or Brokdak 1/2a set up is used

This is description of the $109 RSM electric system:

Whatever happened to this kit? There is a guy over in SH looking for a similar plan now.

The answer is self explanatory. There's those that are cheap and then you have control line cheap. The control line flyer would fly a newspaper until the print comes off of it. When it crashes , they will retain that paper for 40 years until they can figure out how to put the print back on it. There's very few that will part with that kind of money for a 1/2A kit . The scenario is quite common as they will ask for it, not buy it, then complain when it's gone.

Even at the price Eric is offering, the kit is essentially being given away. Laser cutting demands lighter balsa which is becoming more difficult to source and the price has gone up numerous times over the past 10 years.

The kit that Fred depicts was made for a event "Leprechaun Stunt,"  held on the west coast. Larry Renger, and a few others created this event  for their club the Knights of the Round Circle. Larry was monumental in this event and it stirred a good bit of interest. However, these small beauties take a lot of time to build, the engines are more difficult to source compared to  larger models and they also take a lot more effort in making them fly correctly and at the proper speed. These fellows are getting up their in age and less than a handful of them are even flying.  Most want instant gratification and give up when things don't work correctly. I recognized  this from the Brodak 1/2A stunt event. Therefore, most don't want to be bothered by the smaller mills which obviously cancels out kit sales.

Little Legends were  a series of planes that were designed by the greats, Paul Walker, Bob Hunt etc. These planes if memory serves me correctly were profiles. Beautiful designs and they were going to be offered by Walter Umland. When Walter generated interest in who wanted them, the internet lit up. The next step is committing to buy them which quickly brought this idea to a screeching halt.

The positive side to this post is that,  I'm that individual who pushes for these types of planes and events. I'm willing to share experiences and knowledge gained by devoting hours of trial and error. Therefore, I don't want to see these types of kits fade from our reach. I can only encourage those who also show interest in this type of plane and or flying to buy them.

I have offered my never to be built kit to the guy on SH...If he passes
it will be here on CEF

Fred, he's a great guy and a good flyer. There's no mistaking him when present. True to tradition, he wears all white and doesn't have a speck of dirt on him.