Flight report for saturday at GAMA!

Flight report for saturday at GAMA!

Saturday was cloudy but fairly nice, not too hot and not too cold variable but light winds so we decided to head out to the circle at GAMA and get some flights in so here is my report for this little session!
Please note however there are no pics or video this time around sorry:(

I got out to the field around 2:30pm to find bill already there unloading his equipment, his brodak vector being the first in line so we set it up, hooked up the lines, fueled er up and coaxed the Brodak .40 to life. He walked to the center and gave me the signal and off she went for a nice roll out and lift off, but the ghost of karma rose and said it was not to be because just after lift off, a leadout failed and it quickly entered a big loop on takeoff and did a graceful but hard pancake into terra ferma shaving the gear off and shattering the prop. The model was not badly damaged in the crash however which is a good thing so off came the vector and was put away and next was his white Fox .29X powered voodoo, we hooked er up fueled the pacifier and lit off the fox and off she went and talk about a hotrod, she screamed around the circle on 60' lines averaging 3.5 sec laps and for a full run! finally! Bill put er through all the maneuvers without a sag awesome flight! It's second flight went even better!

Next up was a new model that he recently acquired, its a Eastern European FAI F2B (I think) combat wing made by Yuvenko & Co Aeromodel products which is designed around the Profi .15 This example was however powered by an older blue cased OS LA .25.
We hooker it up and started er and once bill got to the center and gave the signal, off she went! While the flight wasn't incredibly fast it was however very smooth and stable and talk about a long flight was up over 6 min. He put it through the manuvers making it look easy!
he flew er for two more flights with the same consistent results, the last flight being after mine.

Now it was My turn, first up was my super clown powered by a late 50's vintage Fox .35 that I have been treating for low compression slowly building its compression up on the bench (it was a victim of someone using synthetic oil which wiped the varnish that was providing the seal for the piston out of the engine) and now it was time to test it out in the air. I hooked it up, checked and centered the controls and fuel it, then came the moment of truth, I primed it hooked the battery up and gave er a good flip and it busted off on the first flip! I went to the handle checked the controls again and gave the signal and off it went! first i let er go for several laps, then proceeded with fairly vigorous climb and dives then I put er through some loops, the engine breaking between 4-2-4 about instantly through the maneuvers with not even a hiccup! the landing went smoothly as well. This engine is running better than my new fox!
My second flight went about the same except it took about four flips to tick it off enough to hit back this time and it busted off with a run about the same!

Next model up was my ringmaster, Like normal I hooked it up checked the controls then fueled it and hooked the battery up, It started easly and with bill holding er back I went to the center and checked the controls. I had done some control adjustments prior to arriving so this was a new flight again. anyway I gave the signal and off she went this time with a new prop (10x5) and she pulled real good! however after a few seconds it went real rich so I had to limp it around the circle for about the entire flight, I tried some mild climb and dives to try and get the engine to break and clear out but no go oh well at least the controls felt better. The second flight did better with it clearing out enough to get some descent laps with climb and dives then a loop along with a mild wing-over (Im getting those higher) the loop however burped or tried again anyway but not as bad. May try a different tank later also going to burp stick it.
The third flight was the same as the first, rich but cleared about half way through the flight and turned out nice!

All and all we had a good time and even Mac Hodges (Flew the famous giant B-29 with the rocket powered Bell X-1 for those who don't know) Flew in and landed at the GAMA field to see and chat with us We've known Mac for a long time and he's an awesome guy if any of you ever get a chance to meet him chat with him!

Anyway I hope you enjoyed my hastily assembled report here and next time there will be pics, just didn't think to grab my camera this time. Take care folks TD out! now it's time for bed (The bandit gets up turns around them passes out, flopping onto the bed ZzZzZzZz.)

Ditto What Fred Said! Glad the Ringmaster straightened up and gave you a good run, AND that Bill's Vector survived it's failed line!

Man we did have a blast, the Voodoo is a monster just as it should be. The Vector kind of survived the crash but didn't survive the post flight dissection.. the bellcrank was suspended in the middle of the wing which was permanently mounted on the fuse. The further I cut the more I knew it wasn't gonna happen. Unfortunately the brodak crap arf curse struck again. The motor, Brodak .40 survived with just a little dirt to clean off. It made up for it all that the Voodoo and Yuvenko combat ships ran and flew so well

I'm wondering why my bud said we didn't have any pics???? 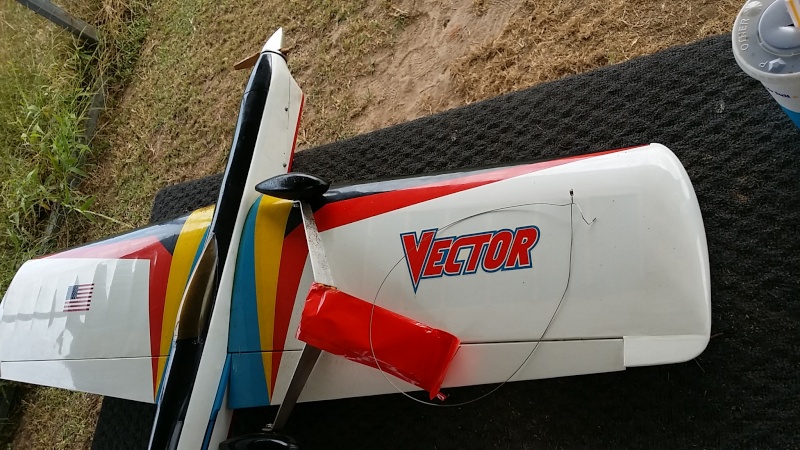 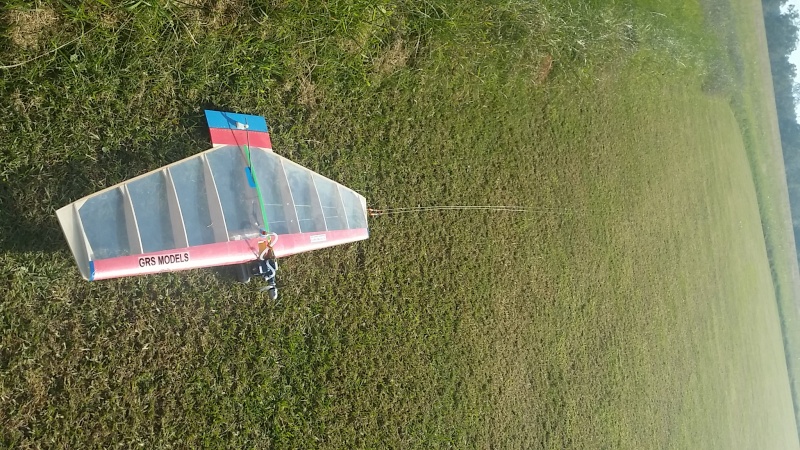 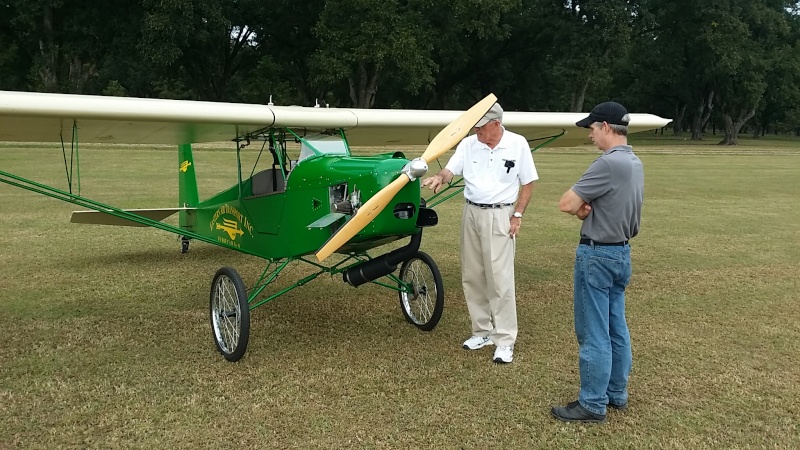 Made this rack Sunday.... 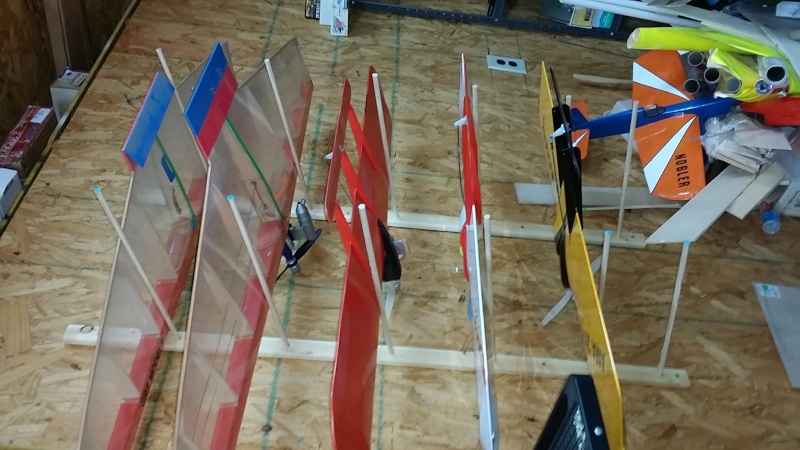 I feel the pain on the busted leadout .... I've had 2 of those in the last couple months, on 2 different ARF airplanes.

badbill wrote:I'm wondering why my bud said we didn't have any pics????

LOL I didn't know that you had taken pics

Btw you need to get your 1/2A nobler up and going. The thing looks fun!  (Bandit)

That is a great report, Bandit and Bill. Well written story, TDB.
I'd like to take some of those combat planes for a ride.
That just sucks about the Vector. Maybe an ARC next time, so you can get in there and upgrade the hardware a little easier. Glad someone got out and did some flying while I was sitting around being lazy this weekend. Thanks for sneaking us a few pics, Bill.
Rusty
_________________
Don't Panic!
...and never Ever think about how good you are at something...
while you're doing it!

Thanks for the Report , sounds like a exciting time of flying . Nice looking planes Bad Bill ! Looks like you will get to fix the ARF right this time (the USA way) getback

Many, MANY kudos to John Brodak. They are shipping me one of the new P-40 ARF's to replace the Vector. This kind of customer service is what keeps me coming back.

Hey Bill, I've seen one of those P-40s in action and it's a good solid pattern plane if you want it to be. Or just for sport. My buddy has one that was built by another club member who's downsizing and gave it to him. It's been a really nice surprise.
Rusty
_________________
Don't Panic!
...and never Ever think about how good you are at something...
while you're doing it!

badbill wrote:Many, MANY kudos to John Brodak. They are shipping me one of the new P-40 ARF's to replace the Vector. This kind of customer service is what keeps me coming back.

This version of the P-40 ARF just arrived at Brodak about a month ago, along with their new Ringmaster ARF. Supposed to be a lot better quality than the older one. I actually have an older P-40 ARF that I converted to electric. It flies nice but hasn't seen much action since I got hooked on the vintage combat stuff.