Log in
Search
Latest topics
» maybe fly today
by rsv1cox Today at 11:42 am

» Engine Display Stands - Coming Soon!
by getback Today at 7:41 am

» Help me Find m'y lost Snowmobile engine from california dan
by davidll1984 Today at 12:00 am

Yes sir Kari...know the drill had several different vehicles when we lives in the below zero north... usually a battery heater, block water heater, and hot oil circulator...and a small Gen set to run them for a few hours if power out....Military still has to report to duty despite very cold weather...very rarely in my career did the post commander declare roads are code black ---report later in the day

But you are correct, be easy on Power steering and brakes until fluids can warm the rubber hoses that will crack or break very easy if too cold

Hey Fred,
Based on what I saw on the Weather Channel today, You may want to bring in any brass monkeys you may have.. LOL !!

What are you guys talking about, block heaters, synthetics.

Some of the coldest temperatures ever in the USA have been recorded in New Hampshire and my old 1937 iron block 60 hp Ford V8 always started sans garage. Later, my '47 Plymouth too. 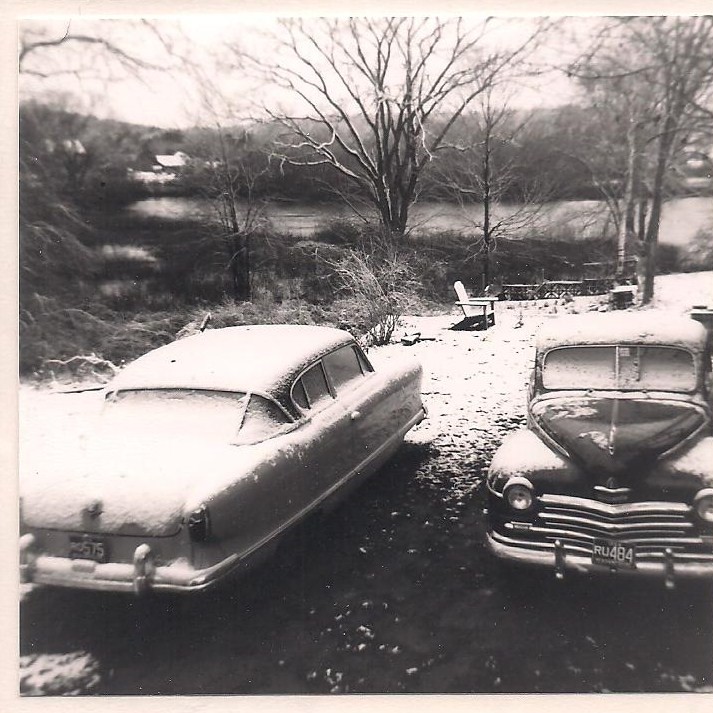 Living one time in WV Kari, I think Fred knew all that stuff.

We had a serious amount of ice yesterday. Now were expecting more tonight into tomorrow. I can't say I'm enjoying it. The snow from 3 weeks ago is still on the ground and while it semi warmed up today, it's still pretty darn cold. More snow expected later in the week, I can't wait.

Worked 10 hour weekend days starting at 14 years old at Toddy Clements chicken farm shoveling you know what for fifty cents an hour after school and weekends to buy them.  Ford cost $80, Plymouth a year or two later not much more.

BTW, I walked the three miles there and back in snow and sun until I was 16 and got my license.

Still here in teh deep freeze with extreme cold warnings for well over a week. Daytime temps around -22 F and nighttime still hitting -45 F and below with teh wind chill. And to top it all off, I have two local friends competing in the Irondog Snowmobile race in Alaska and the temperatures there are much nicer than here. Go figure!

fredvon4 wrote:very rarely in my career did the post commander declare roads are code black ---report later in the day.

We got our notification for tomorrow around early morning today.

I'm an hour west of Tuscaloosa, AL. Probably three hours west now, given the in-toen road conditions.
No snow plows in east central Mississippi...late reporting tomorrow except for essential personnel. Our roads were 3" deep/ wet sleet-covered by mid-morning today. By late afternoon all the ruts were starting to freeze. My friend's truck was tracking wherever the ruts led, not necessarily where the wheels pointed. I know the bridges got slagged (not sanded or salted) last night. So I try to avoid all bridges for the next few days to prevent "early windshield retirements."

fredvon4 wrote:Yes sir   Kari...know the drill had several different vehicles when we lives in the below zero north... usually a battery heater, block water heater, and hot oil circulator...and a small Gen set to run them for a few hours if power out....Military still has to report to duty despite very cold weather...very rarely in my career did the post commander declare roads are code black ---report later in the day

But you are correct, be easy on Power steering and brakes until fluids can warm the rubber hoses that will crack or break very easy if too cold

Ah, sorry, yes, forgot you have lived in other places too besides Texas

Block heater is about the only thing I use. In modern cars those are not always immersed in the cooling system, just bolted on the block, pretty much useless, sometimes they just confuse the car’s computers. I would like to have an oil pan heater and also a heater under the battery with some insulation around it. Ice-cold battery does not give out power, but it does not like to accept charge either.

When I was in the Army, we still had Soviet-built equipment. Kinda crude but very reliable. I was a tank mechanic, specialized in T-72. It had huge batteries (periodic removal, service and reinstallation through the driver’s hatch was a pain) and for back-up it also had pneumatic starter to crank up the supercharged 39-litre dohc V-12 Diesel. Pre-heating was by a fuel-powered burner that would burn probably a couple of gallons per minute and sounded like a jet engine. The engine was dry-sump, and the oil was heated in the tank by water circulation. It also had pre-lubrication with an electric pump that you’d have to turn on and watch the pressure gauge before hitting the start button. When that beast of an engine cranked up and came to life, it rocked the entire tank. Magnificient machine! Not the greatest tank as such, especially in today’s standards, but fascinating in all its crudeness and simplicity. It was built nuke proof, and that meant there were not a single transistor or a modern diode on board. Everything was mechanical. The radio was built using tubes and weighed about 150lb

Before the days of block heaters and synthetic oils it was a common practise here to cover the nose of the car or truck with a felt or tarp all the way to the ground, and a couple of hours before the start, take a pan of hot coal under the oil pan. Batteries were kept indoors to keep them warm. Much easier nowadays

My old school thermometer that records high and low temperatures by pushing a blue bar with the rising or falling mercury. Registered zero degrees this morning, coldest of the season. I have seen it register seven below and a high of 110, in error as the sun hits it. According to legend in this part of West Virginia the high temperature has never hit 100. 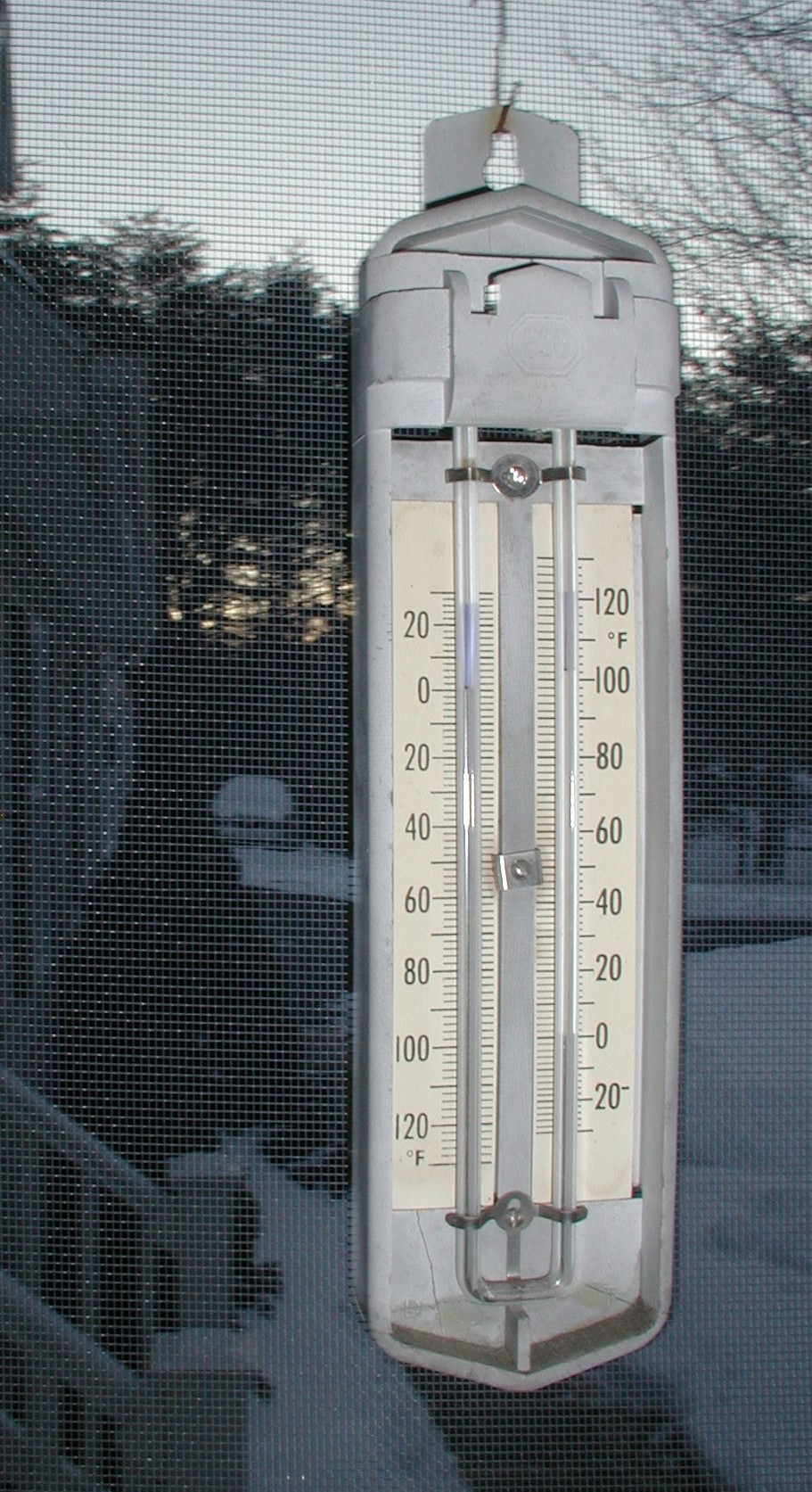 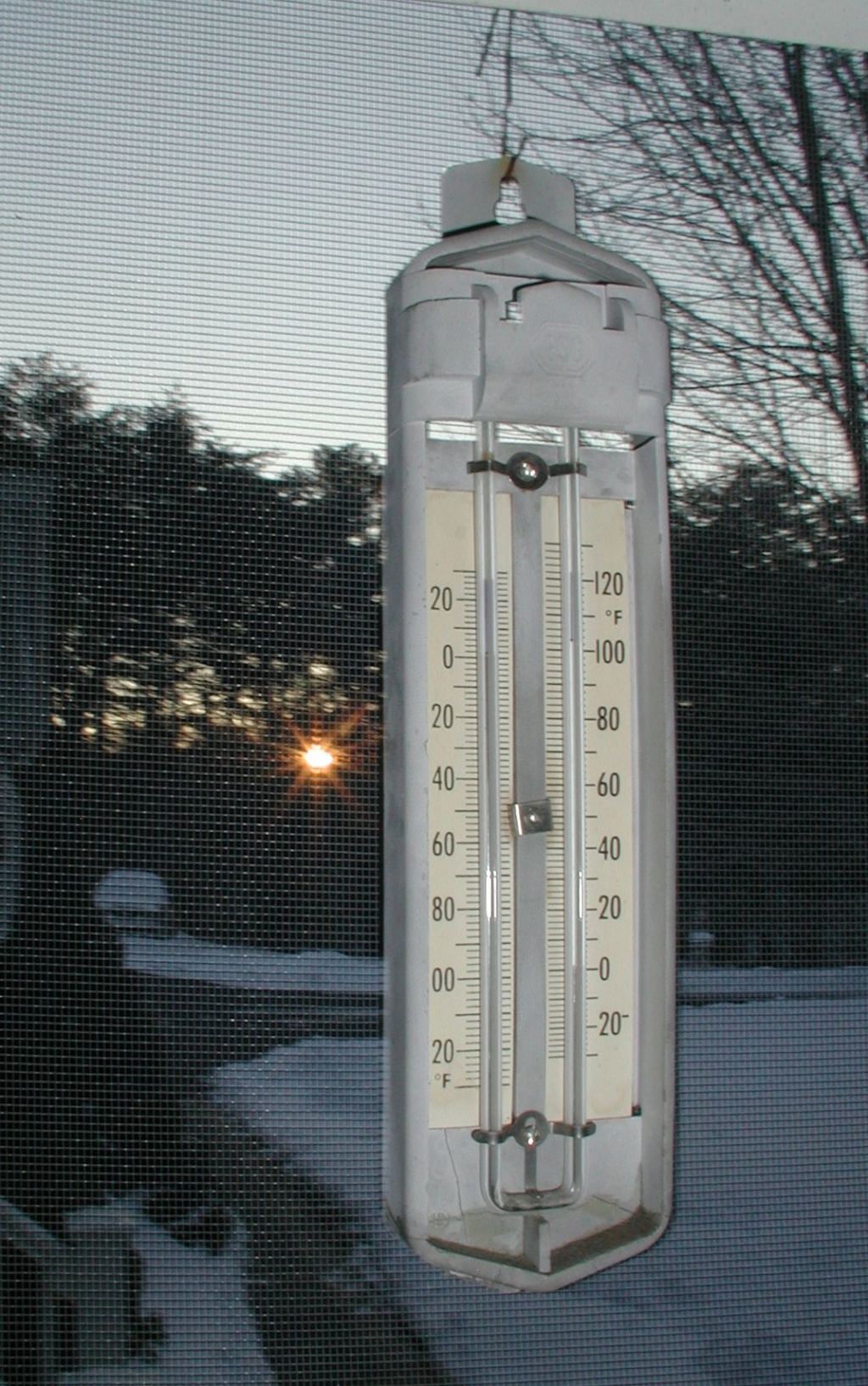 Sunny but 29F now was 23 feels like 18F overnite . Sorry i don't get the T-stat Bob mine finally died well works but not right LOL says its about 40 outside where it is . Its 40 + yrs old round one Big !

Another @#%% snowstorm here. STILL coming down hard!. Plows already manged to plug end of driveway 4' deep!....and it ain't over yet. At least its no longer below zero! 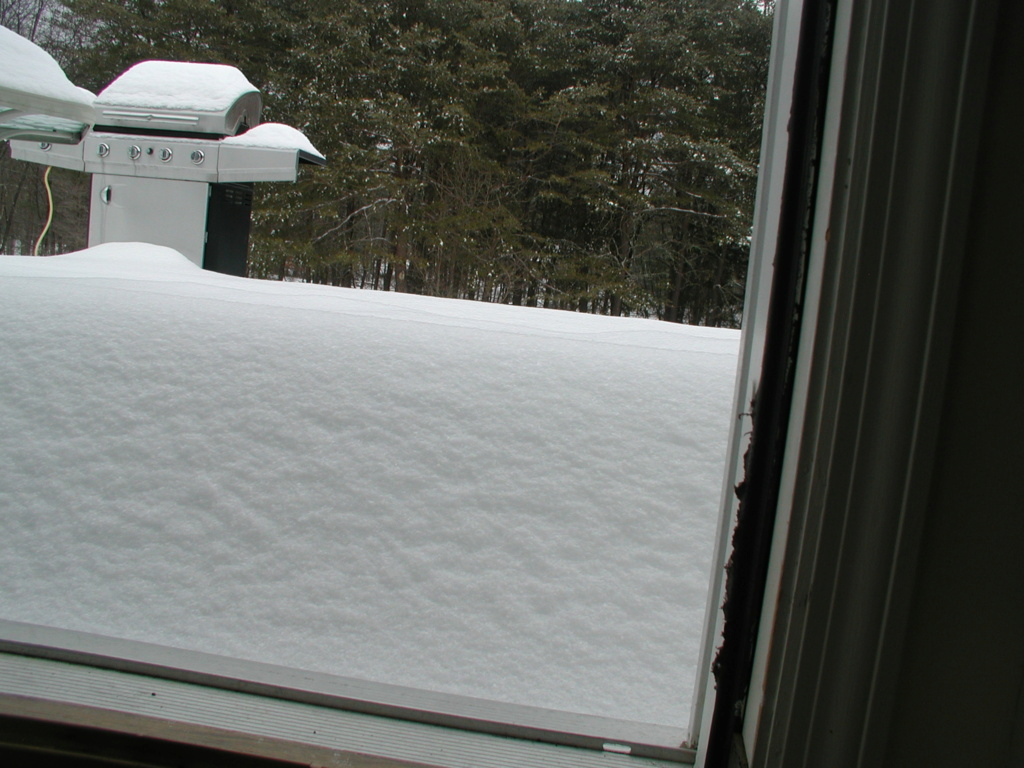 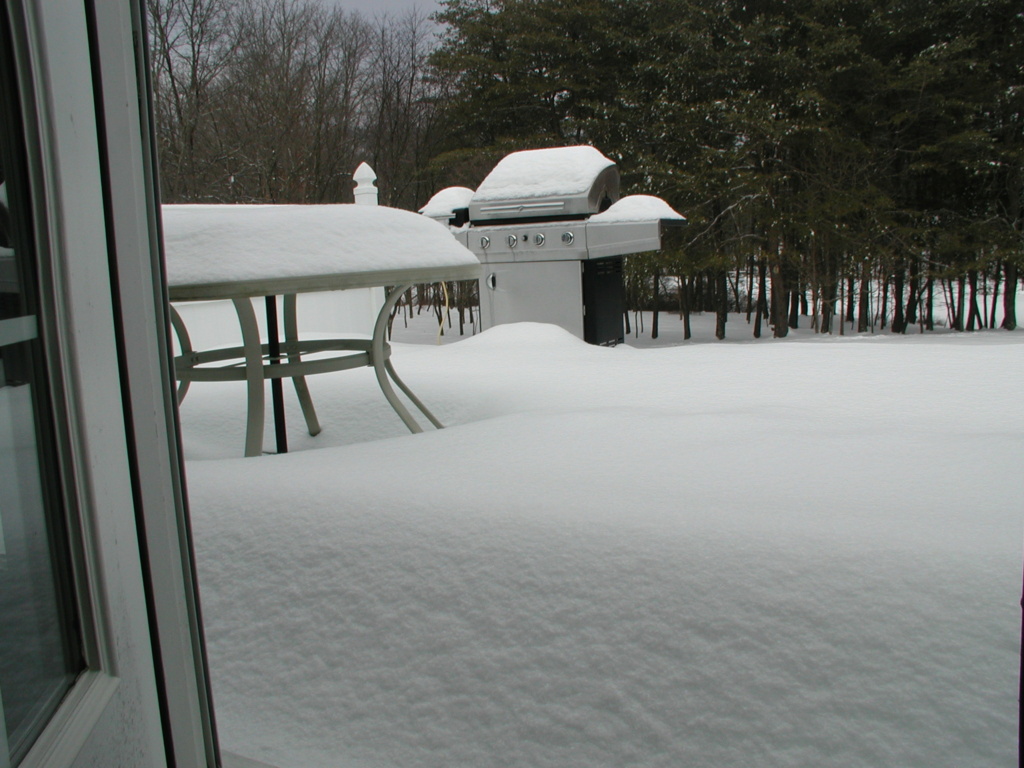 Spent the day shoveling another 8" of white crap!....and 4' high berms plowed across my driveway and sidewalks.  Just once I'd like to be out there and catch one of those SOB plow morons. They blew it right up against the back of my wifes new truck,and winged it halfway up into my yard! Must be why they do it at 5:00 AM!.

Yesterday and today here in wales, UK, within a few miles if Snowdon, on the north side of the valley, south facing, it's not raining ! So it's a good day

, nice and sunny with half a "Simpson" sky, but the breeze is a little chilly.

Going to be a lovely weekend, dry, little wind and lockdown.

Stay safe out there, be patient don't become one, stay safe

Last day of summer here tomorrow.  What summer?  It's hard to know what to believe.  Yesterday one news report said that we received 1/3 of our average summer rainfall, then just after that another report said that we had the wettest summer on record.

All I know is, we've had only about 1/2 a dozen of what I would consider "hot" days (and I don't like hot days, so I'd remember).  I also know it's still green and lush, the lawn still needs mowing weekly, the roadside grass has just gone nuts and the local civic council isn't keeping up.
On January 26th we celebrated Australia Day, normally when it's stinking hot, but this year we celebrated in the rain.  February around here always means bushfires, but things are just too damp to burn

Night times have been chilly- only about two nights all summer that we used the air conditioner.
It certainly makes it hard to believe the so-caller "experts".

We are a small and flat country yet with extremes these days. A week or so ago minus 26C was measured in the North East of Hungary (which is about 100 miles from South West of the country

) on a cold night, and 2 days ago I measured plus 20 C in the early afternoon. Anyway, spring is around the corner, that is the best news so far this year..