60s F yesterday 50s today with low in the 20s for a couple days then roller coaster back up to the 60-70s next week ?!? It a wonder everybody aren't sick the way we fluctuate , did manage more fire wood for the morning . Finally got some veggies plants starting to come up in the dinning room ,light heating pad tin foil tent what a pain but will bee worth it when time comes to pick and eat !

Just watched this guy make these onyo rings got to do this soon i been Jonson for some good ones ! https://www.youtube.com/watch?v=nJq6uebXgZY

Awoke to this this morning. 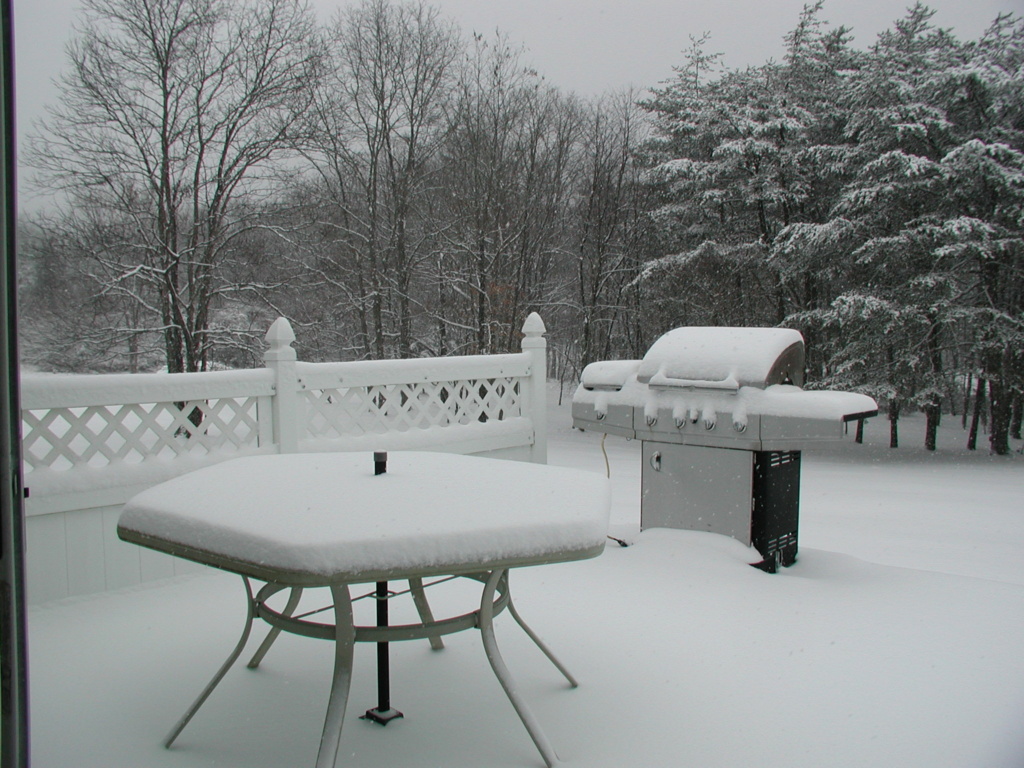 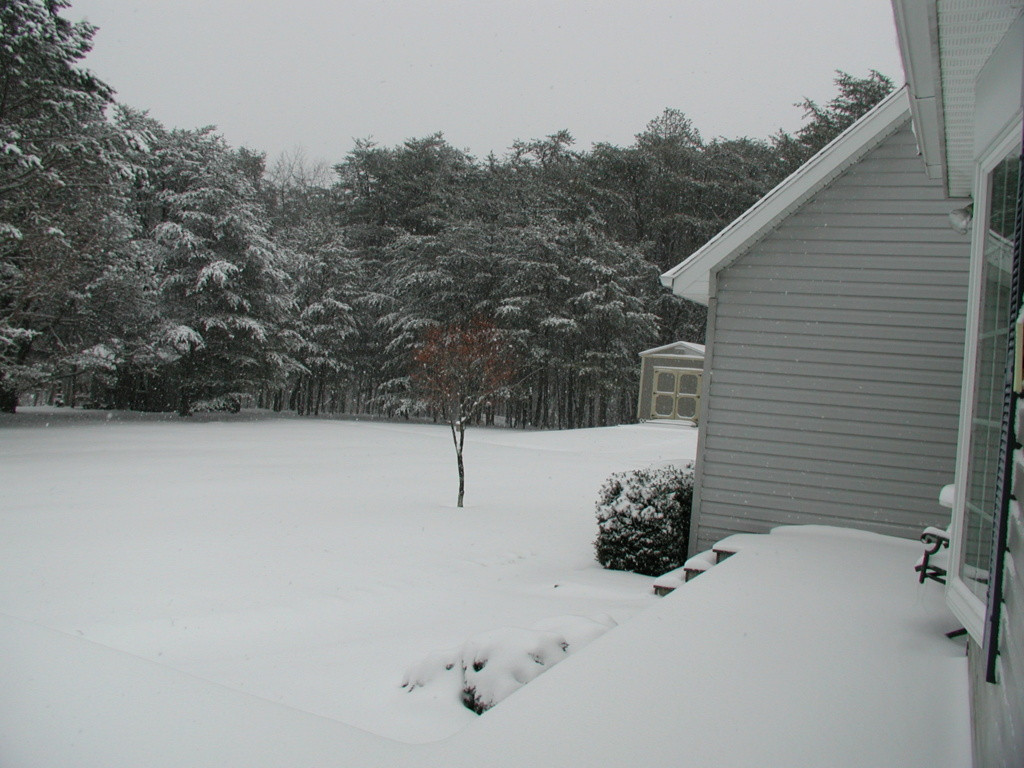 me too getting the list together stuff i don't have for them , Might get a dusting tonight from what i have heard ?!

Oldenginerod wrote:I know the news has been "flooded" (pun intended) with Ukraine news, but have the Aussie floods managed to get onto your news?  Massive areas have been hit.  Rainfall totals like never seen before.  Nowhere near us fortunately, but we're on a hill anyway and would be safe.  New housing developments have recently been approved around here on flood prone land.  I wish local governmend had enough sense to ask the question why no-one had built on certain areas of land over the past 200 years of white history. Maybe they should have asked a few of the older locals.

That’s one solidly built bridge! My compliments to the chief engineer

Not a lot of your floods in our news. Not many fatalities I suppose, or major landslides involved? The war in Ukraine is less than 1000 miles from my home, and we are pretty far from it compared to most Europeans, so it’s mostly news and speculation of the war and its anticipated consequences. For us Finns there’s the additional twist of being one of the very few non-NATO countries, and the only non-NATO country in EU with common border with Russia. 830 miles of it. So, the floods in Australia are not on the top three headlines here.

Climate change and the related extreme weather anomalies have taken the 3rd place in the news lately (Covid has the 2nd place now) I know that a lot of people think it’s not for real, but, as you said yourself, ”rainfall totals like never seen before”, and some other places have ”drought like never seen before”

Covid is still quite real, fortunately the newest variant is closer to a regular flu. Easy to catch, but easy for most people to cope with. At least for us double- or triple vaccinated. A lot of people still die of it, mostly people who have not had the shots, or who are already suffering from a chronic disease. I have had Covid-like symptoms a couple of times, but the home tests have all shown negative. Many colleagues have tested positive but have had very easy symptoms. So I guess it’s passing. I still do wear a mask when I go get groceries, mostly to protect others, and it’s also mandatory at work except at our own desks or while eating. I guess we could quit the mask thing already. Anyone who wants a vaccine has had the opportunity to get it, and the supplementary shots too, so anyone who hasn’t, well, it’s up to them really. Pharmacy companies are developing a nose-spray type vaccines too, those would make it easier for people who don’t like needles.

Oh, the weather... spring is definitely on its way. The first swans returned last week, they usually stop around here for a month or two on their way to North. Snow’s melting, a lot of puddles everywhere, although there’s still a lot of snow left. A foot or so. Water is low in the river, looks like the hydropower people downstream are making room for the thawing snow by letting their turbines run on full power. Also nice to have sunrise earlier in the morning, and sunset later in the afternoon. Well, sunrise, the swans and the river are not technically weather-things, but definitely signs of the approaching spring

Got a beautiful, clear, and bitter-cold day here on the hill in S.E. Missouri. 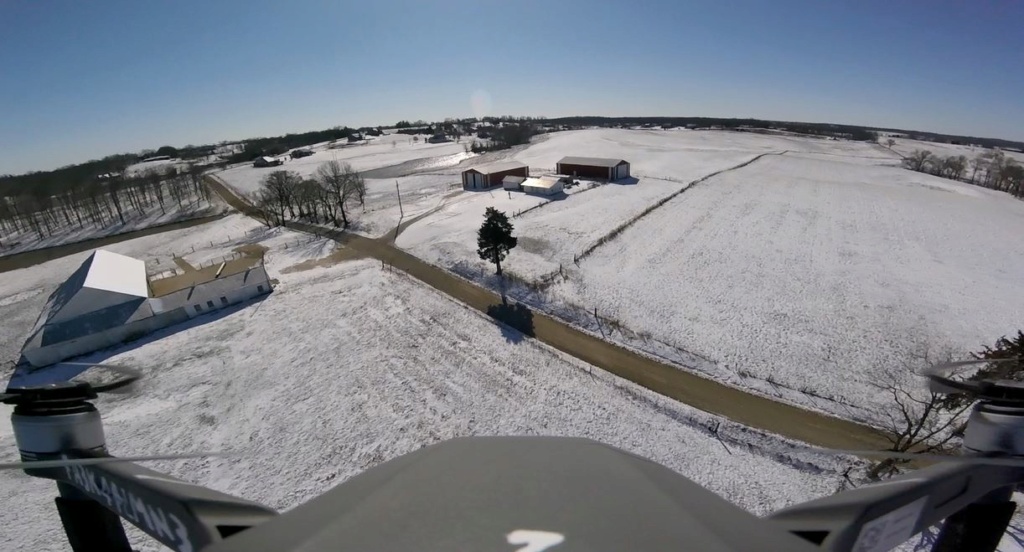 Well, just when I thought it was starting to get nice outside, a good chunk of snow melted, mother nature has thrown a new curve ball at us..... A huge Colorado low is en route as I type. They are locally forcasting this as both the 'Storm Of The Century', and the worst blizzard in decades. They have been predicting this for over a week, but that was too long to guarantee anything. Currently Bismark, ND is currently a white-out, and it will slowly be making its way here around dinner time. Currently in North and South Dakota, and Minnesota, alsong with their big list of warnings. There has already been schools cancelling bus service in Winnipeg (the closest big city where I work). They have told people to stock up on supplies and groceries, and medications, not to travel Wednesday or Thursday (make alternate arrangements), and also to plan for power outages. I cannot remember when we have ever had such warnings in place, let alone this far in advance of the storm. Like Covid, there has been some panic shopping and such locally.

Snowfall is expected to get between 12" and 24" by Friday, and even shy of 36" in some places southwest of me here. Best part however, is that I am on holidays so I do NOT care. April holidays are always a crapshoot whether or not I can do anything outside or not. Well, this year, I lost!

Beautiful here today, 80 degrees. Looks like your weather will hit us Monday.

Heavy wind and rain here last night, got up this morning and looked out the kitchen window and saw this: 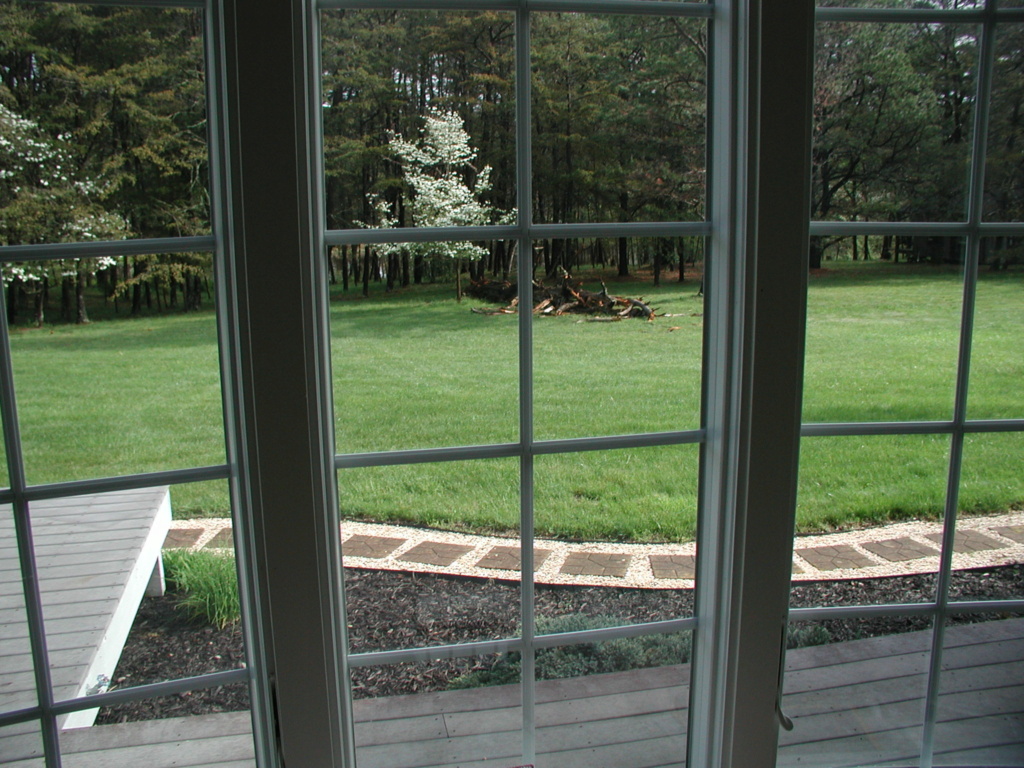 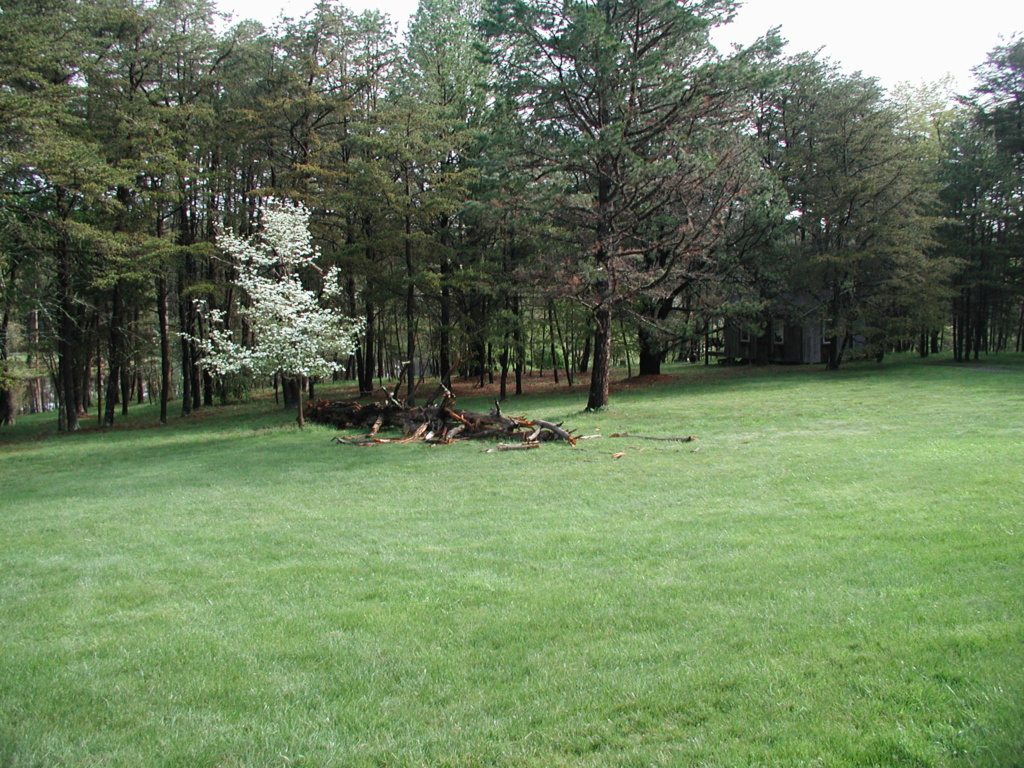 Big dead pine tree.  It was alive 12 years ago when I moved in but the pine bark beetle got to it and killed it within a year.  Naked for about seven years without a bit of green on it.  Became a fixture that I knew I would have to cut down someday.  Nature did it for me.  Now I have to cut it up and drag it over to the burn pile. 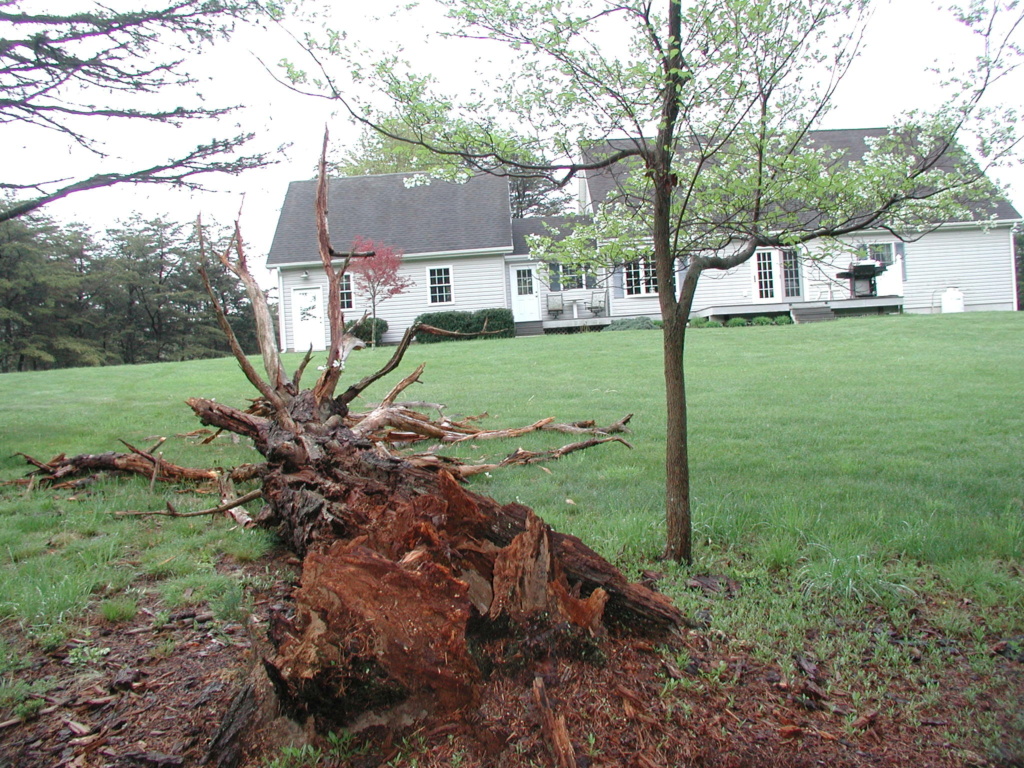 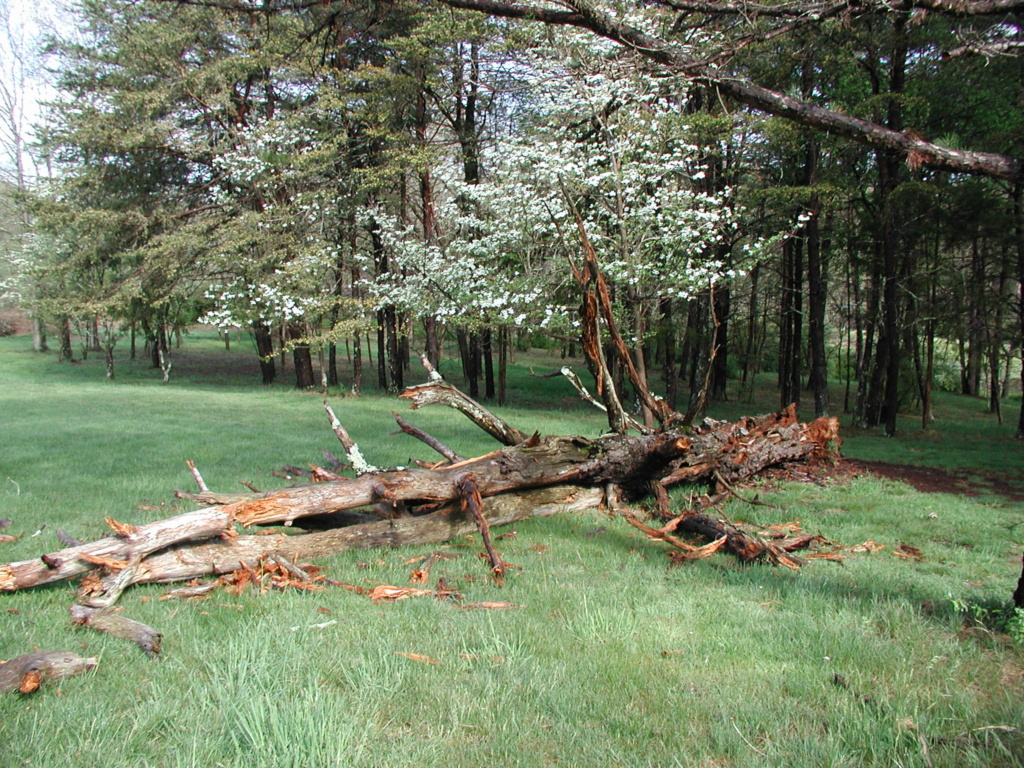 So crazy up here lately. Last Tuesday through Thursday we got 1/2" of rain at the cottage. We were out there Thursday till today. Thursday night we received another 1.25" plus of rain. Then we woke up to it snowing on Friday morning for a good portion of the day throughout. Very wet snow with anout 1/2 inch accumulation and rain on and off throughout the day.

Not what we need anymore of by any means. Many communities have had evacuation orders in place. Even further north past my cottage in Nopming Provincial Park, many roads were washed out and no travel is permitted and those there were stuck there as there was no way out. One of those roads has since been fixed, although this was prior to the recent weather we had there. Then on Friday, a lake in the Whiteshell provincial park was evacuated. Now today I see a very large portion of the park is to be fully evacuated by tomorrow at 5 PM due to rising water levels on the Winnipeg River system. Many cottages have already gotten flood damage, boathouses destroyed and floating away, docks and boats washing away randomly into lakes floating downstream, along with anything that was in peoples yards. This is from Lake Of The Woods and Lac Seul being dumped into the Winnipeg river from Ontario which is making its way through our dams on its journey. The doube whammy for us at the cottage is that the flooding north of us does run downstream to the river our cottage is on which in turn flows into Lac Du Bonnet Lake of which is a part of the Winnipeg River system. The water levels are already much higher than normal, and it is expected to rise yet even more in the coming week (s). So we are essentially getting it from both ends...... Mother Nature is NOT playing nice this year. Plus it is now supposed to rain Friday through Sunday this coming week.

Just rained 1/2" (13mm) here in Clovis. That makes 1 inch total for the year, falling short of at least 5 or 6 inches normally.

Similar topics
» The weather in India
» What the hell is up with this weather?
» The Weather is getting weirder!
» Bad Weather
» Here's how to fly in inclimate weather!