@ticomareado wrote:I believe you've got a pre '96 QRC for use with a muffled PT-19. Somebody decided they'd rather make noise.

I think Bob’s engine is a QZ, like mine on page 12 of this thread. Not sure but I think QRC only came with the stunt tank. Or maybe it’s a Babe Bee equipped with the QZ conversion kit minus the silencer. Interesting engines anyway. Collecting these is almost like collecting stamps, always looking for variations and anomalies

The engines are more fun than stamps though.

You are correct-- QZ it is.

From the COX Model Engine Handbook I figure my Babe Bee has the same detail features as the ECJ#38 dating back to 1956.

I also expected this to have a 3-piece piston, but in fact this has a 2- piece one.

I must correct myself..when I managed to undress her today and get the piston out by first unhooking the large rod end from the crankpin (the cylinder did not budge no matter how I heated then froze the crankcase) then pushing the piston up and out from a preheated cylinder (seems to have some taper no matter it is a No2 cylinder) I found a 3-piece piston in my hand: 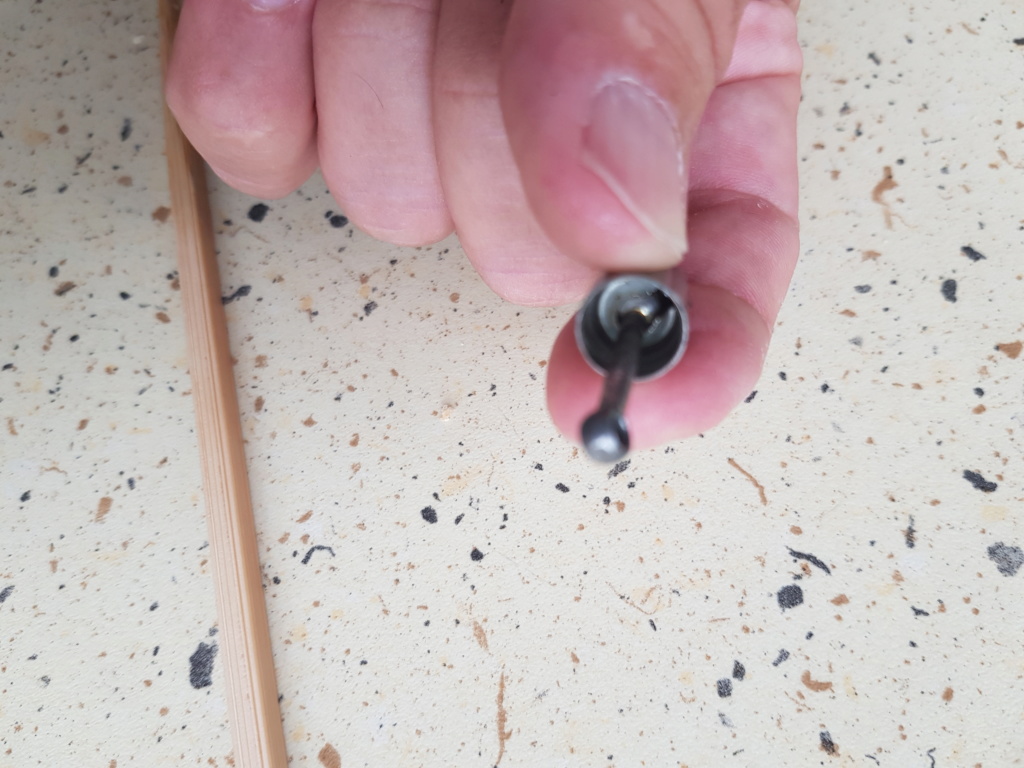 A bit sloppy balljoint with unwanted gap but I am afraid this cannot be reset like later pistons...the rod is thicker than in later pistons and the reset tool slot does not fit, for one thing..and hammering the rod retainer clamp in the piston does not seem a healthy cure, for another..

Well then you've become a collector whether you intended to or not. Clean her up real purty, make a document style brass plaque and put her in a showcase.

No showcase or brass plaque kind of things Ticomareado, not that I am surprised if real collectors like Dan Sitter keep their engines in such reverence..I will start her up but am concerned whether the sloppy balljoint will last..

Scored this all metal TD .15 Special after putting it together
with parts and some elbow grease. 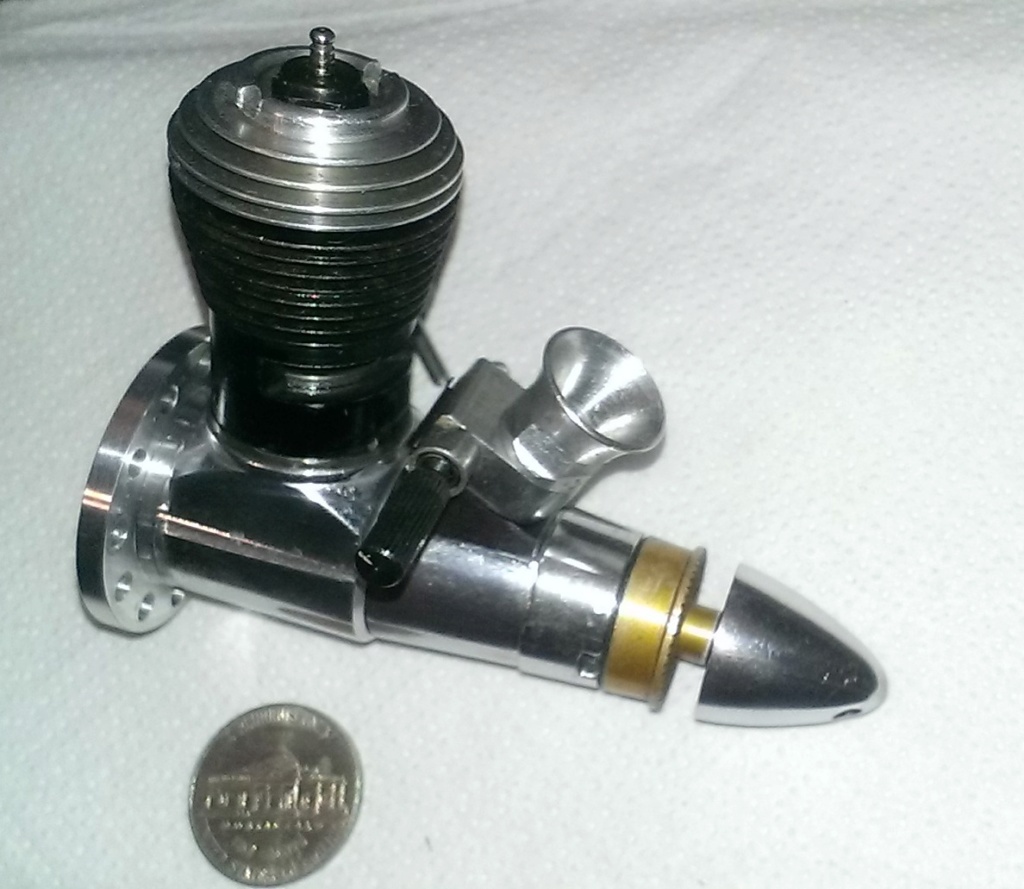 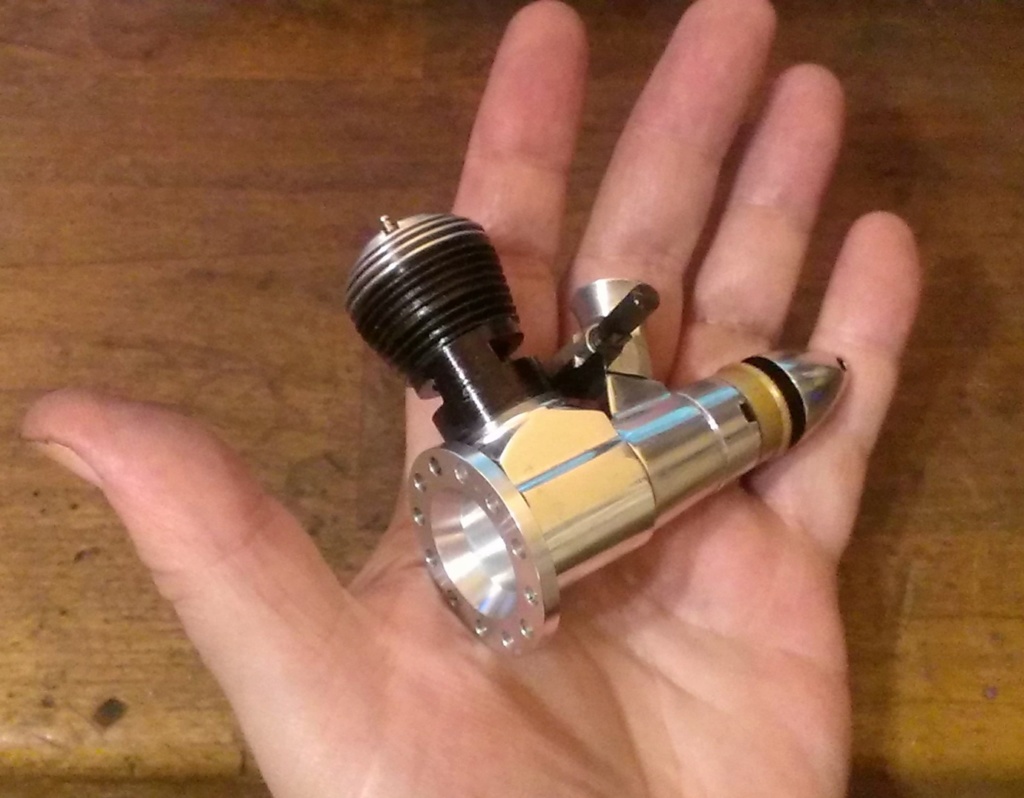 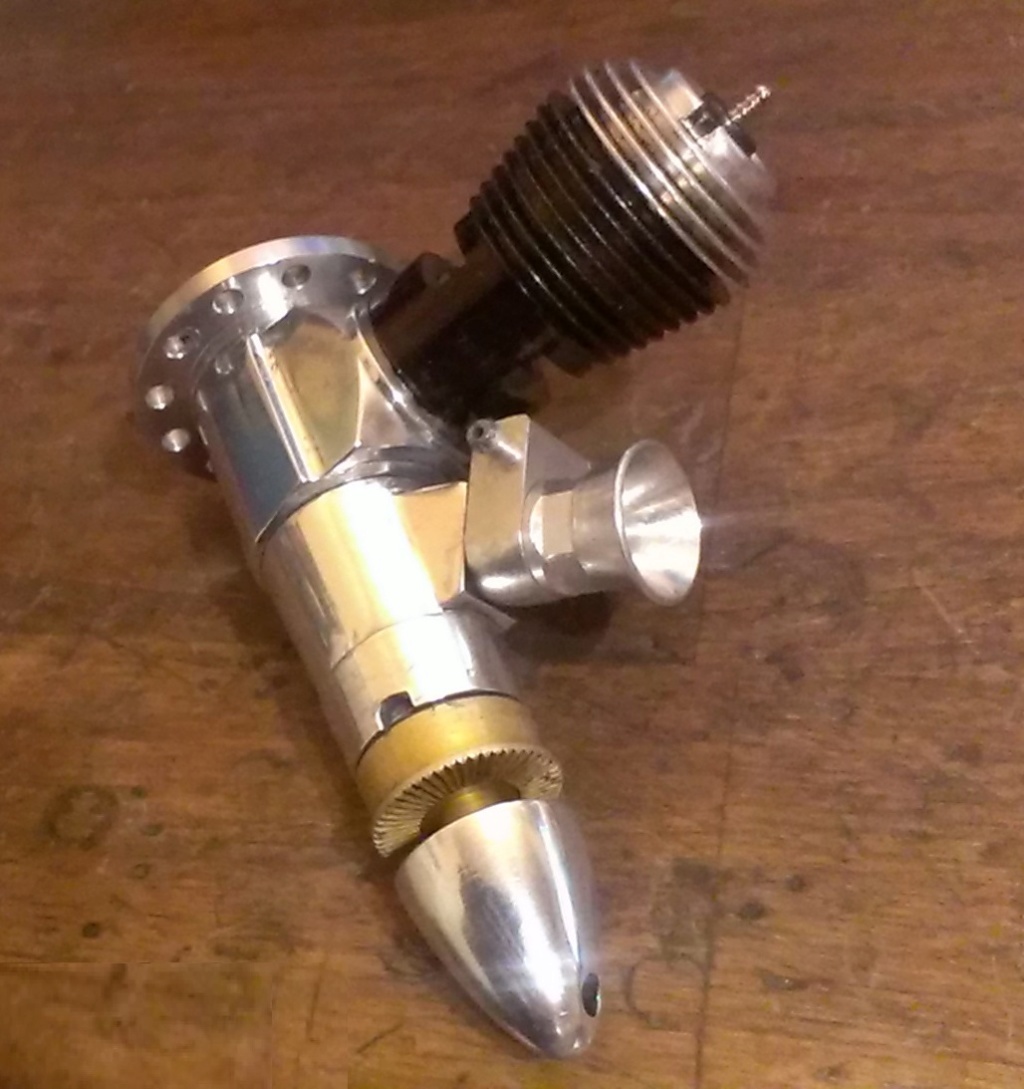 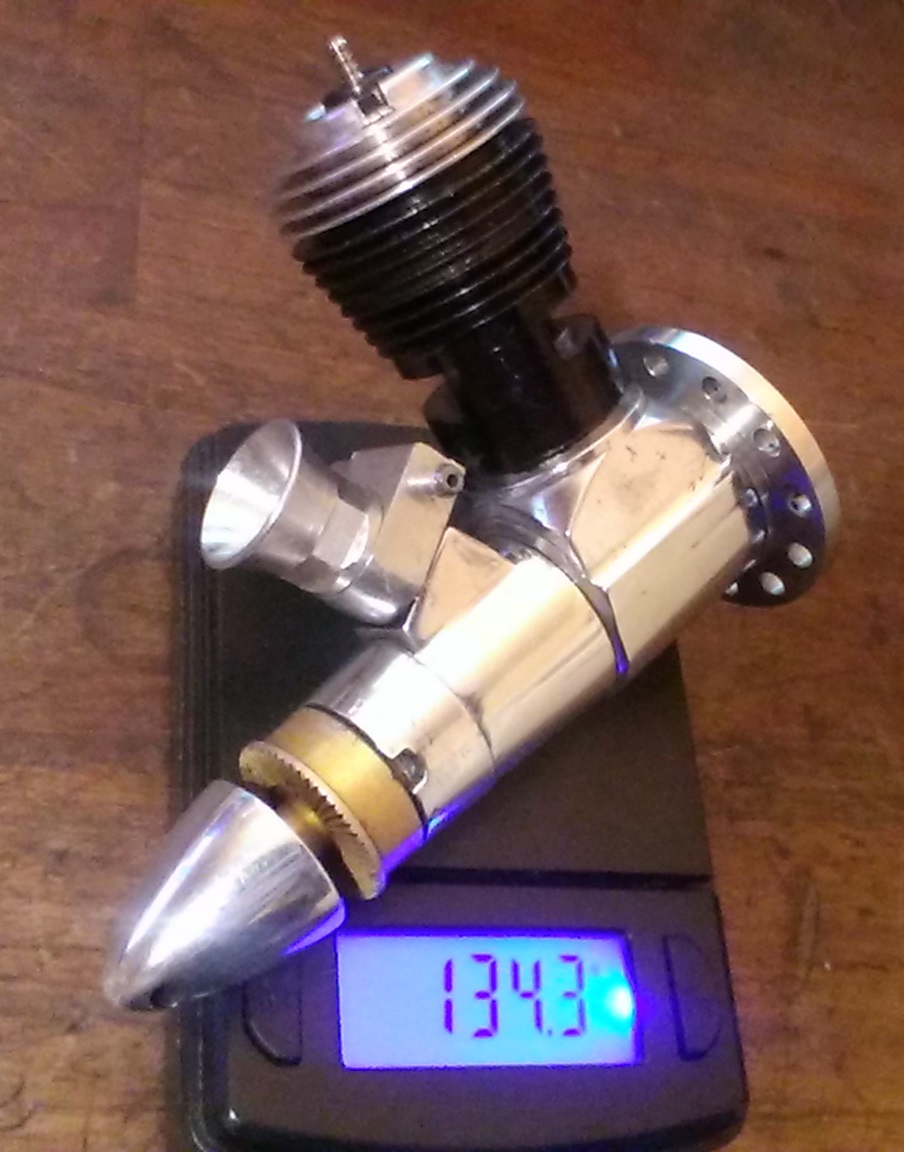 Bitchin' .15 !! All it needs is a flywheel, cooling jacket, belt driven water pump and a low rider car to mount it on.

Nice catch Brad..I guess a .15 TeeDee will not lose much power if used with the adaptor head instead of the stock COX glow head?

, the compression with the 15 is ok needs a
turbo head adapter to add some extra power.

My latest acquisition is a .15 also. A fellow hobbyist sent me a .15 glowhead a few months ago, unused, and for him unnecessary. A couple of weeks ago he wrote again and told he found the engine for that head. An Olympic no less!

He was reluctant to set a price for it, and suggested a trade if I happened to have an RC ”fixer-upper” or something. I listed what I had, and he got interested in an old-timer model ”Spartan” kit I had laying around. I said I could throw in some cash and he said he could too, so we settled for a trade. He sent me the engine and I sent him the kit. Both of us were happy with trade.

The Olympic looks and feels like it is in very good condition, no sticking, good compression etc. Not a lot of tool marks either. The red anodizing has faded in a weird way, on one side it is like new, and on the other almost gone. I wonder what may have caused it? Parking in sunlight for an extended time, or soaking in something for years?

I have an NIB carb body but no NVA nor venturi. Well, it looks pretty good as it is, and I think I’ll just clean it up a little, oil it lightly and keep it as it is.

Some pics ”as arrived”: 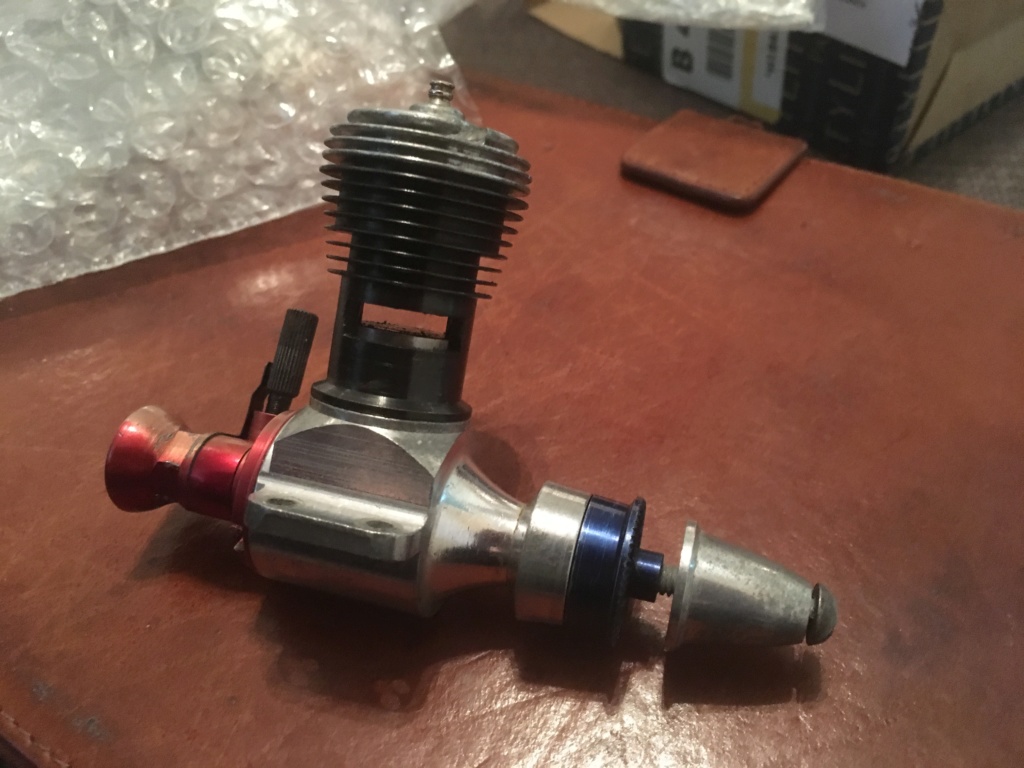 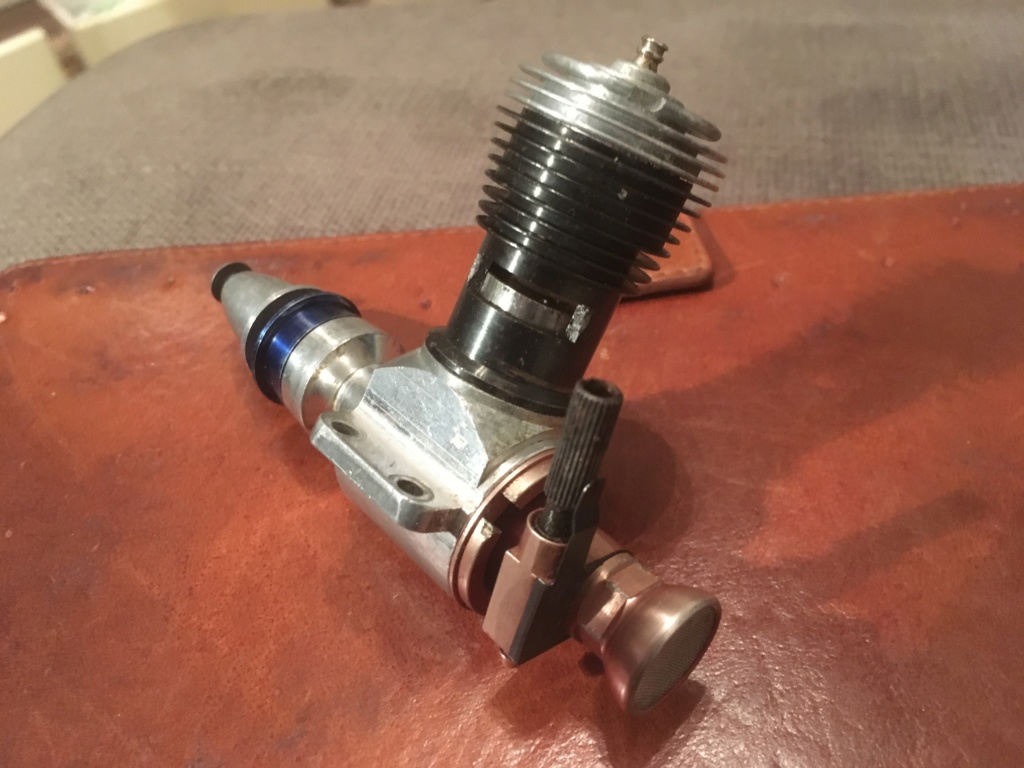 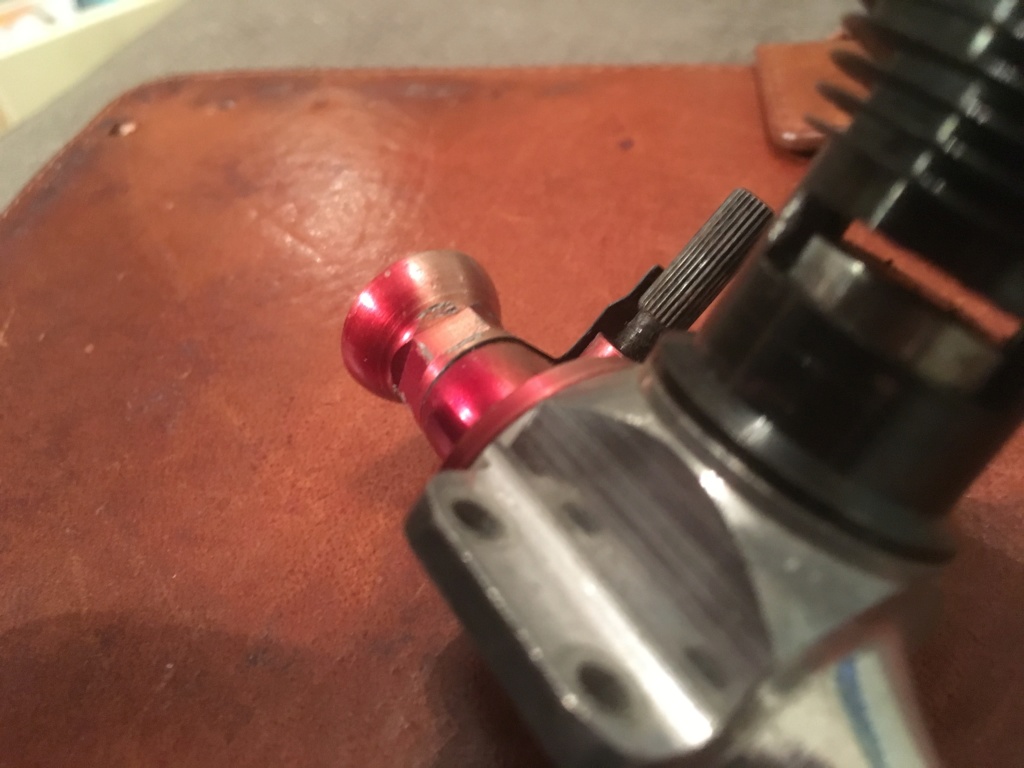 Nice Looking engine Kari , i just recently got one of those myself , i need to run it

That is a little weird about the fade on one side .

Looks like product 049 engine , with 5x4 Thimble drome prop , any expert comment to determine exact type ?
There is number"2" stamped under the exhaust port , meaning its the single bypass cylinder, babe bee and golden bee type.
Which years of production this type belongs? 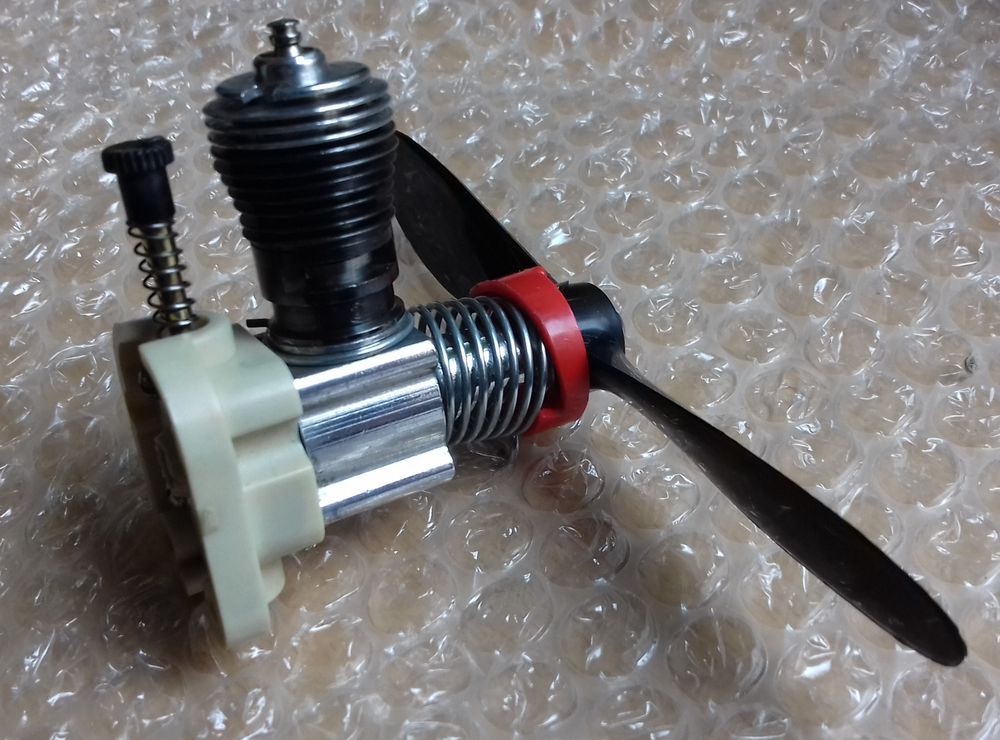 I spotted this on RC Groups a couple of weeks back. I had always wanted one to add to my collection but was unwilling to pay the amounts those I had seen were going for.
This one, asking price $20. I said I’d take it and sent off the usual PM with my details. Half an hour later I see another member saying he’ll take it.
Next morning another saying he’ll take it.
I have seen some write, if the first deal fails, they’ll take it or second in line but both these two were trying to jump the queue which annoyed me a bit.
I hate queue jumpers. I have no problem telling people where the end of the queue is.

Anyway, the seller contacted me and we did the deal. Nice guy and I’d deal with him anytime.
It should clean up nice. 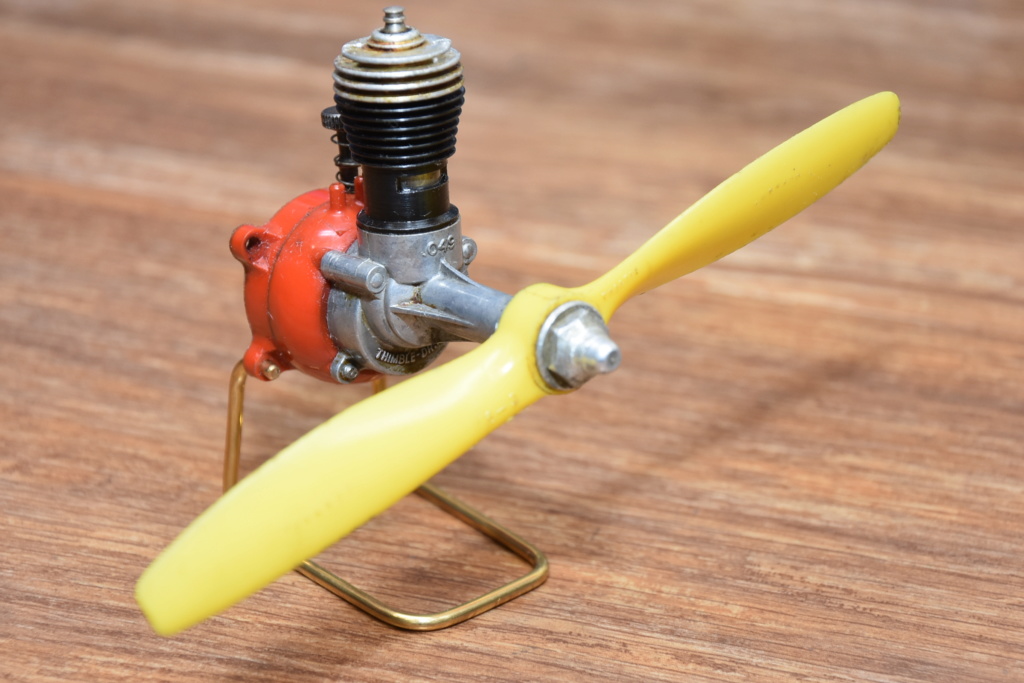 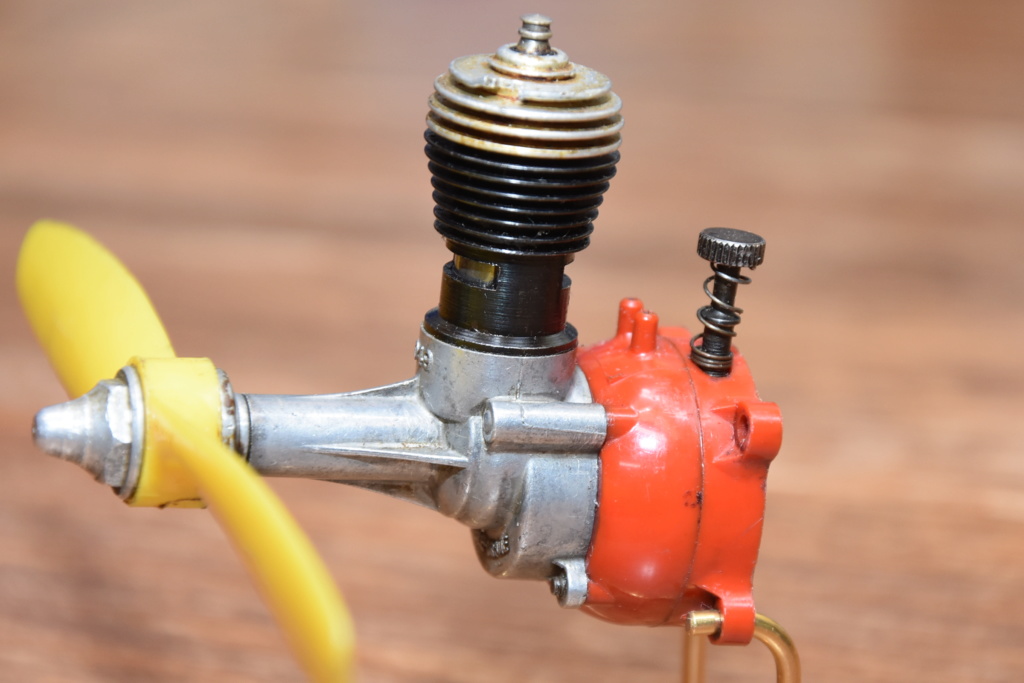 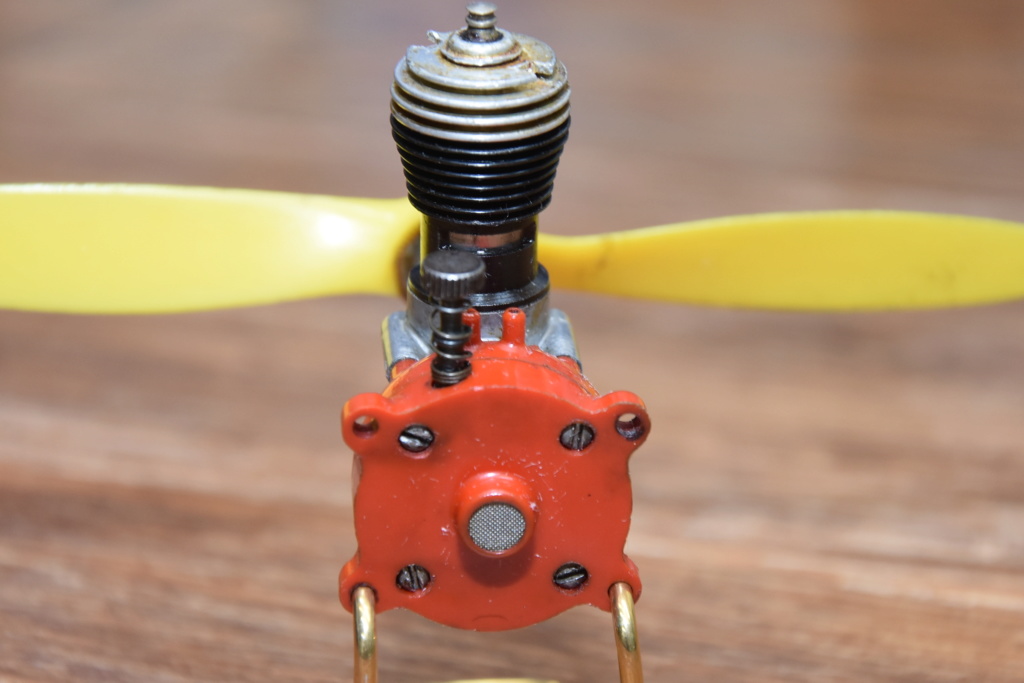 Break apart a retractable pen or mechanical pencil, should be able to find a replacement for that mangled needle spring.
_________________
-Jacob

Looks like product 049 engine , with 5x4 Thimble drome prop , any expert comment to determine exact type ?
There is number"2" stamped under the exhaust port , meaning  its the single bypass cylinder, babe bee and golden bee type.
Which years of production this type belongs?

Looks like 1977-78 / product engine that was probably on a plastic plane of some sort ... http://www.mh-aerotools.de/airfoils/cox_frameset.htm

So, this little lonely guy decided to follow me home from work today. Got what I think was a good deal on it for what I had wanted it for. It had only one picture of the exhaust side in the ad. So when I made contact, I asked for a picture of the other side of the engine so I could see the other side. My suspicions were right, no needle! It came as pictured with the spinner and 8-6 Top Flite propeller painted black. It did not really feel like there was any compression. So when I got home a few minutes ago, I had to look at it better. I had wanted to take it apart and give it an antifreeze bath in the future, so looked at a future disassembly. When I looked at the head, half of the screws were all brown and rusty. I was worried about them breaking and was thinking of another way of cleaning it up. Then I thought, what the heck. Screwdriver out, and a first attempt at the rustiest screw. Loosened quick and easy followed by the remaining 5 screws. Now I was happy. I then took a look at the piston and cylinder and both appear in good shape. It was then when I saw something out of the ordinary, or is it just me? Does the 'fence/baffle' on the piston go closer to the exhaust, or further from the exhaust? This one has the baffle on the exhaust side. I put it back together quickly and gave it a flip, and now it also seemed to have decent compression all of a sudden. If the baffle is supposed to be on the other side, I would also like to confirm the placement and alignment of the cylinder as well. To me, if one thing was played with, there is a good chance the other had also been tampered with. Anyways, enough talk. Here are a couple pictures. 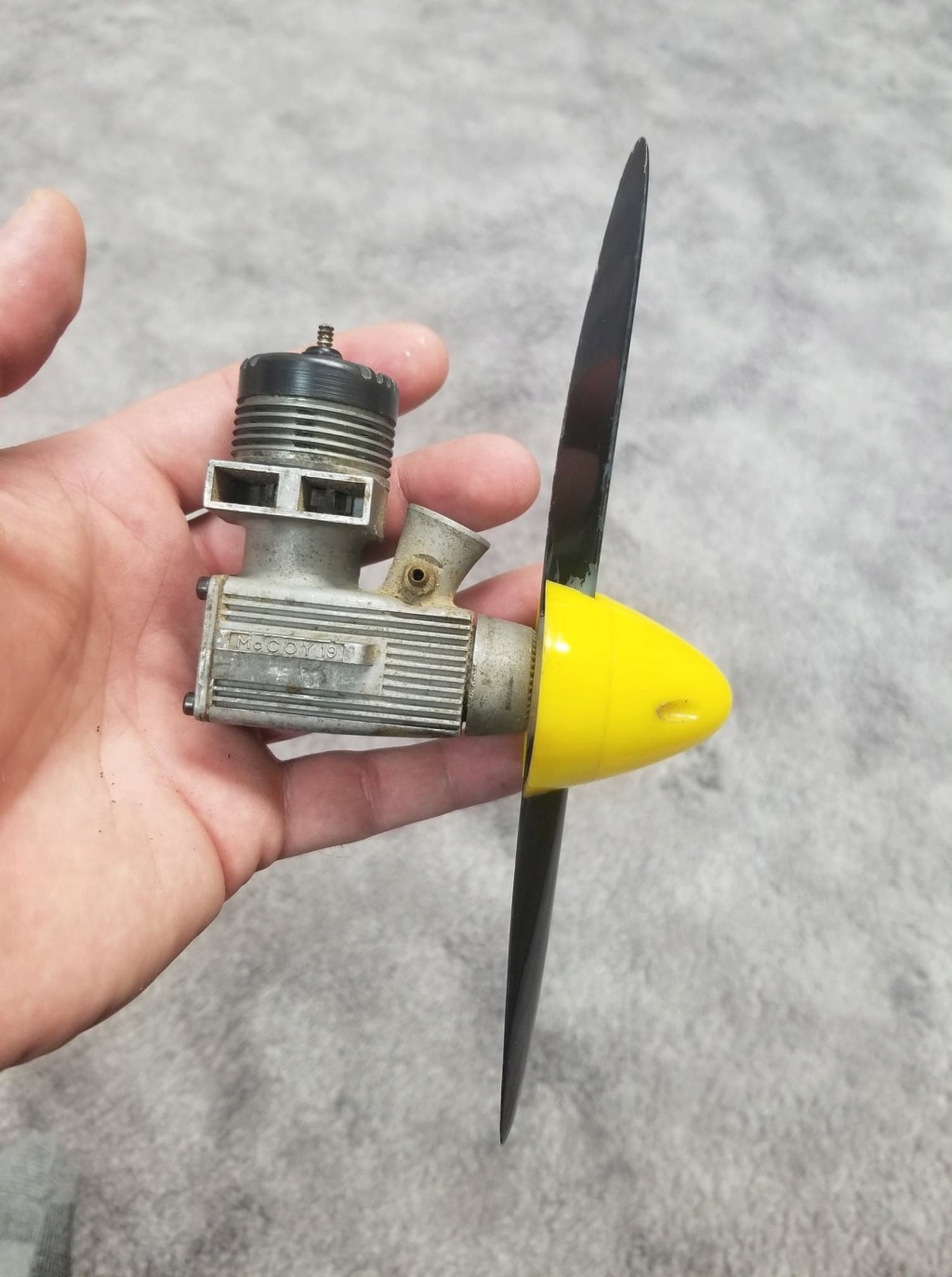 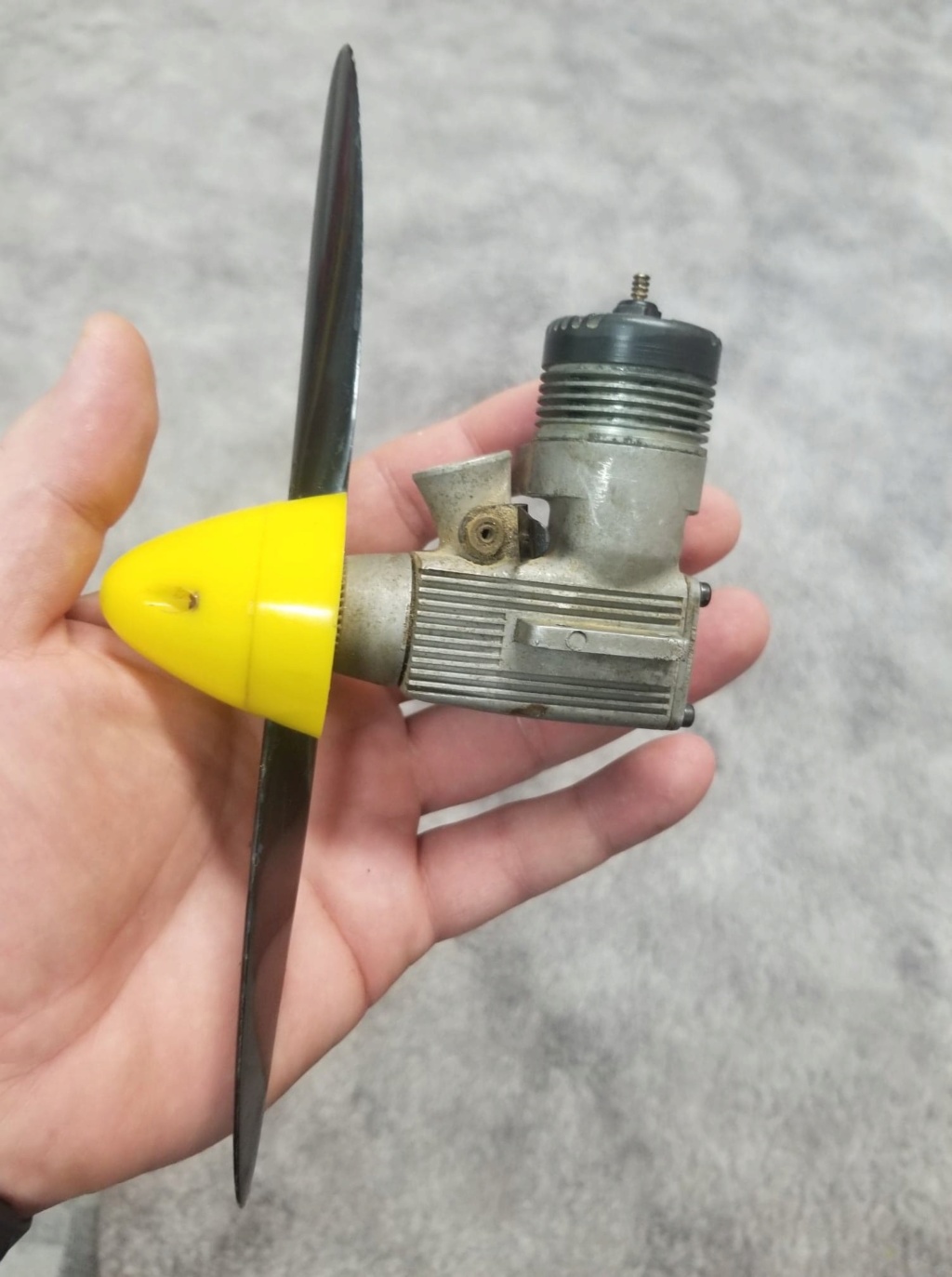 And, on another note, does anyone happen to know what the thread size on the needle are? Just thinking of attempting to make one for it with a screw and grinder. Thanks again. The engine does look very neat in design.

The baffle should be on the bypass side, see description:

This is definately an interesting one. While the engine shows no definate sign of being run, of which the lady mentioned he never ran this engine. It is very dirty from sitting, and what I feel may be the original lube it may have been packed with. Also, every screw was tightened, and removed easily. I am thinking aloud here, but could this have been put together backwards by the factory? After reading the link posted, I took it apart again to see, and that is where I saw the inside is spotless. The funny thing about the piston being installed backwards is there is a screw immediately beside the baffle that is long and would be one that would screw into the crankcase through the cylinder to hold it in place. Thsi is definately a mystery engine, despite the piston being 180 degrees from where it should be. 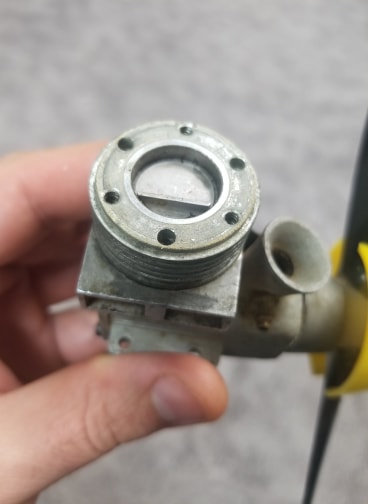 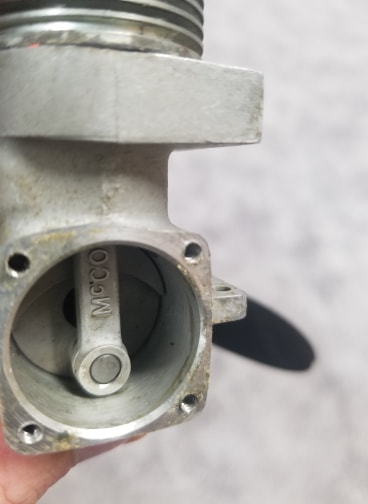 This may help, too, parts list and exploded diagram of the engine. 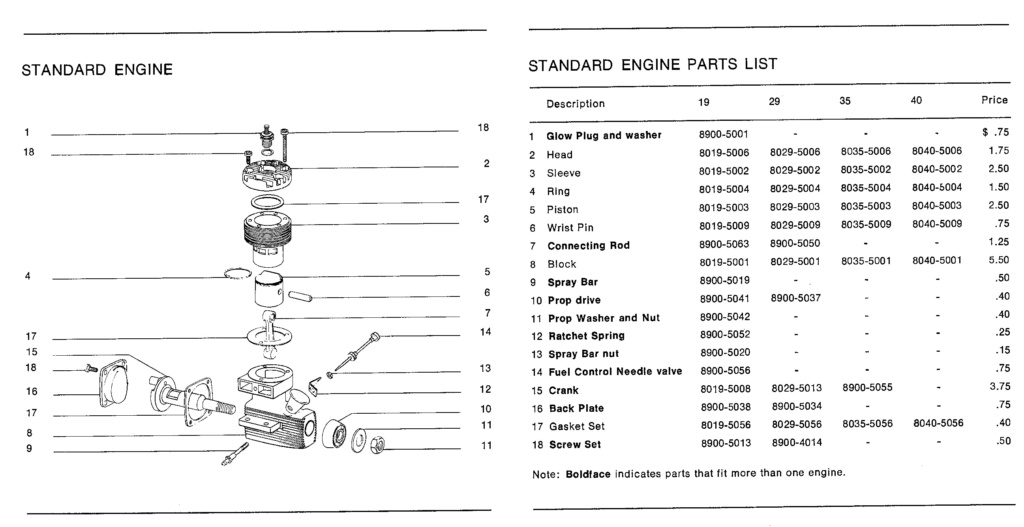 With all head screws removed, the cylinder probably needs a little coaxing to ease it out. Placing engine block and cylinder in boiling water is one way that I've removed stubborn cylinders before. Aluminum case expands sufficiently with softening any congealed oil, steel cylinder with a lower expansion coefficient comes out. (But this is my method of doing.)

And yes, I seriously doubt it came that way from the factory (although anything is possible). I bet that someone, a previous owner or related got curious and disassembled it, put it back together incorrectly.

Thanks for the exploded view and review link.

Hey Chancey what's the weight on that engine ? I know the McCoy 29 with that style is heavy for the power . What are you going to do with it / U didnt say