This is one of my "golden oldies". I was given it in the late sixties. It had served on a free flight power model.

The mounting holes had been widened so that it could be fitted to an aluminium pan. It had also been modified by me for the original owner with a head adapter so that a Cox glow head could be fitted (revs increase by about 1000 doing this).

I have never fitted this to a model but have run it up several times. Will not take much to make this pristine.

Sweet. Very nice example and quite a hot rod.

Edit: I have this Bad boy NIB. Picked it up for a song. 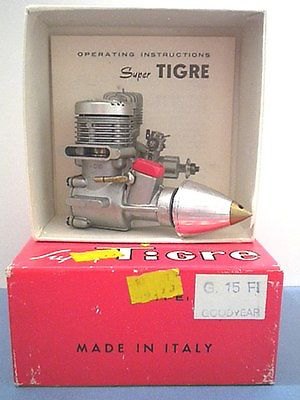 Yours is much better than mine but mine has sentimental value. The Super Tigres were the performance engines of their time, much sought after and very expensive. Mine is a well used "freebee".

The "plastic" throttle restrictor is easily removed. This was done in conjunction with using a surgical tubing bladder. The G15s were eminently tunable. (All for a 10second run!)