» Very Aerodynamic
by dckrsn Yesterday at 21:25

So that's a shortened and lightened piston ? And that 23 +K rpm is not top speed as of now , I am getting 21K out of TD cly from Cox Inter. , red product back plate 4X4.75 prop the yellow one from them also , non killer crank . So that's a pretty go difference even if not wound up to protenual

Hi guys, 1st post here:
I am looking for the doppler speed program, in RCgroups it says its"available from Shrike 1/2A racing group", but the yahoo group no longer responds to my join request. Google image search took me here. Can anyone point me to where I can find it or email to me? TIA!
RCG thread on the doppler program https://www.rcgroups.com/forums/showthread.php?553909-Doppler-speed-analysis&highlight=doppler

The Program I have can be searched as WAVEosScope V2.1

Thanks for the quick reply, but that is not the program I am looking for, I have that one, but it does not like the wind noise my gopro always records. I am not even sure of the name, but it has a blue background. Check the rcg link I posted or the link to the picture of the program.

Ok do not have the other software, I am aware of it there was a few updates to it.
The software I use is fine for IC planes.

Had it been a sheet wing style plane rather than a thicker foam wing
you could hit 130 mph + with that power package.
At 25.2k rpm 7x6 will bust 130 actual.

It is the fastest Cox 8cc 3ch plane on youtube.
Flown to apex speed down wind at the camera.
There is a new plane called Nano X it is made to do over 145

Thanks Brad , just now got back to this and will PU some those incerts Greg has and Nelson plugs soon , The 21K comes and goes so it is just close ON THE GROUND LOL

Thanks 1/2A Nut for looking at it. Did you use the doppler program, or something else to determine rpm?

Are you using pitch speed to give a plane speed number (slightly lower)?

Do you have names or links to the tools you use?

Thanks 1/2A Nut for looking at it. Did you use the doppler program, or something else to determine rpm?

Are you using pitch speed to give a plane speed number (slightly lower)?

Do you have names or links to the tools you use?

Eric,
Greg's adapter is for turbo plugs
If you are buying Nelson plugs you need the Galbreath adapter.

NANO X - maiden flight here's how it went down at the field today:


Published on Aug 4, 2019
HQ 4x4.5 set NV bit rich to insure a full flight and get the surfaces trimmed.
Game plane find out if the design specs pan out and land safe. Insure all
the new radio gear works and the fuel tank is feeding well.

Need a sunny day next time for better vidz with the camera also
realized it was set at 1080P rather than 4K opps.. been awhile
will work on getting my act together for some quality vid runs.
I could see it fine in sky, will work on flying closer now it's trimmed up.
The neon really pops for reference.

The prop started to flutter at 32k plus I can use
this prop with TD .020 no problem also with the
Fuji bearing engine zero play in the axle helps to
keep flutter / stall at bay and has gone as high as 38k
Will have move forward with APC props it's what
the Nano III used up to 138 mph. Only oil on the
plane was on the vertical stab very clean plane.

A TD case with bearings would allow more rpm and stop
the HQ prop from washing out and causing tip osculations. 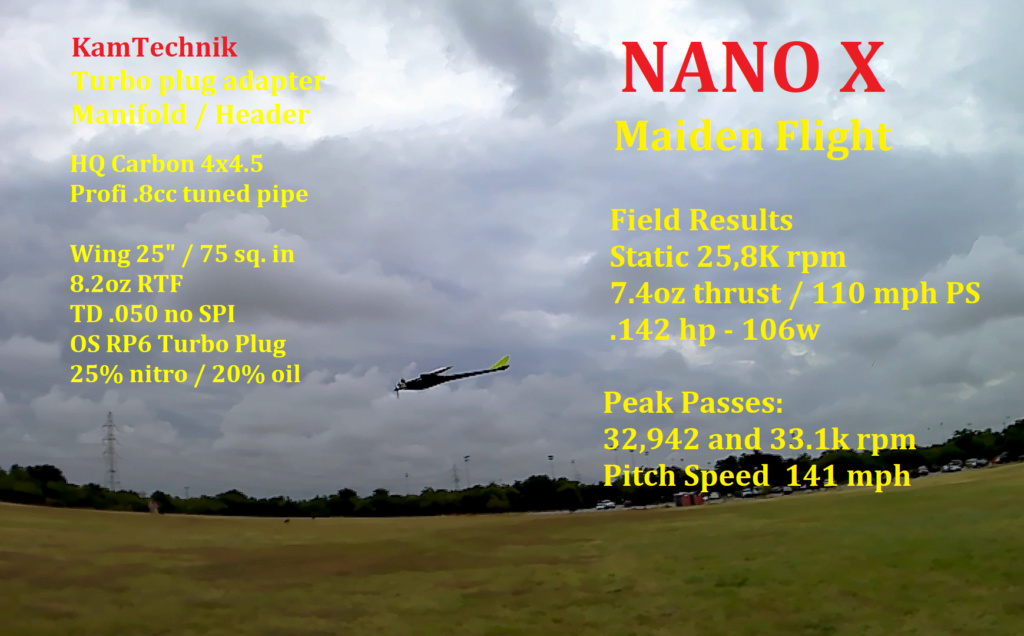 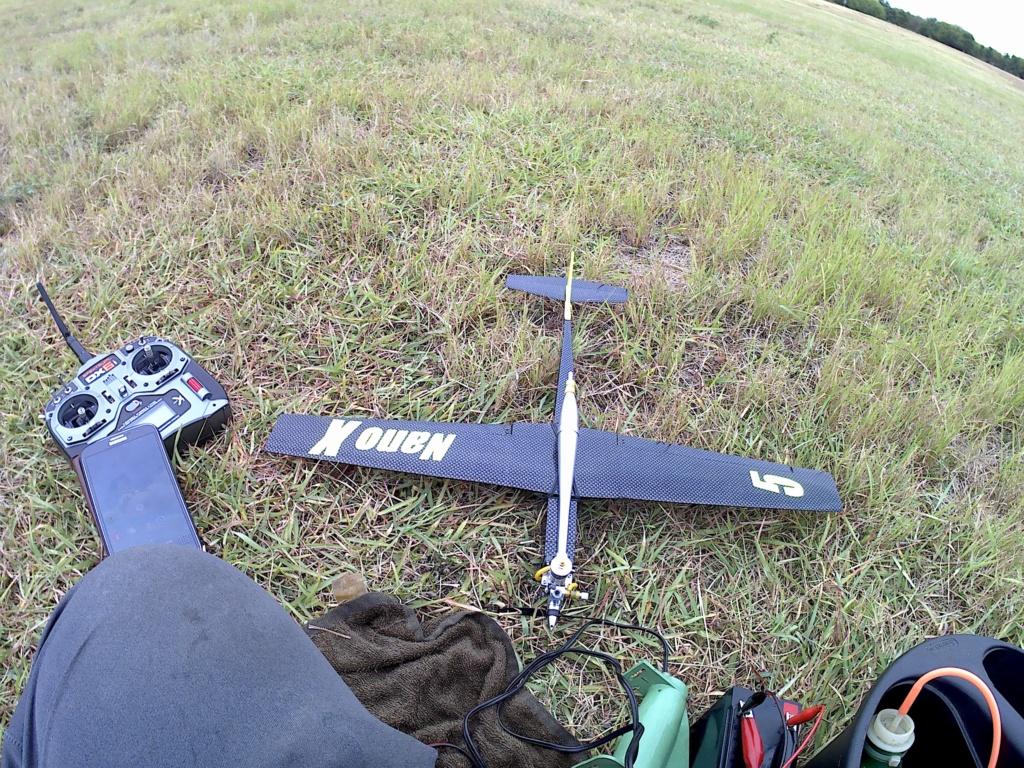 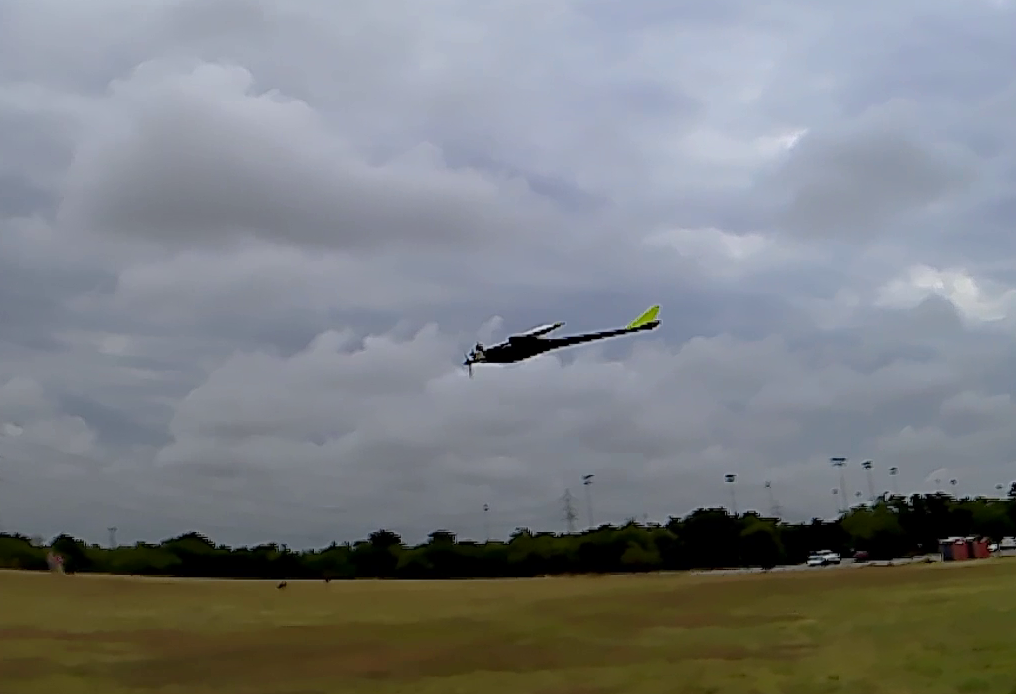 Got it on the Turbo plug Thanks , I could follow the plane well with the Neon covering

Nice runs Brad! When do you think gkamysz starts the production of the tuned pipe manifold and the turbo heads for normal (not the rare Nelson) plugs? I understand tgese were also test flights for those parts?

Thank you Eric and Andras

Andras,
The Turbo Plugs are selling already It was announced a few week back.

The new design with the header has been requested for .02  / .09
and .15 manifold headers as well to test.
The results of Sundays flights and the bench tests are very good!
The header will allow folks to attach extensions, pipes and mufflers.
The fit is nearly perfect needs a tweak on the ID of the manifold.
The production version still needs to be checked to include the O
ring. I had to replace the first O ring with one that would help
seal the manifold better and keep it from rotating. It's up to Greg
now to get the ball rolling.

Turbo plug page here on CEF the adapter worked great making good static power in the field and in the air.
https://www.coxengineforum.com/t11610p150-cnc-aluminum-010-to-15-engine-parts-prototype-testing?highlight=backplates
They are onsite now see link enjoy, testing was not completed
until they reached the performance of a Nelson plug / adapter.
Testing was passed based on 1 shim add extra shims for larger
props as needed. OS RP6 was used for testing.

The TD held up well to high rpm peaking at 33.1k many at 32k +
I need to prop for speed now so moving forward with a APC modified to 4.3x5.5
During the second flight I discovered the limits of the HQ 4z4.5 prop combo with a non
bearing TD under flight loads. I expect 29,500 rpm / 154 mph pitch speed. The plane
is going to really move out around 140 mph ground speed / will film at 4k for good clarity. 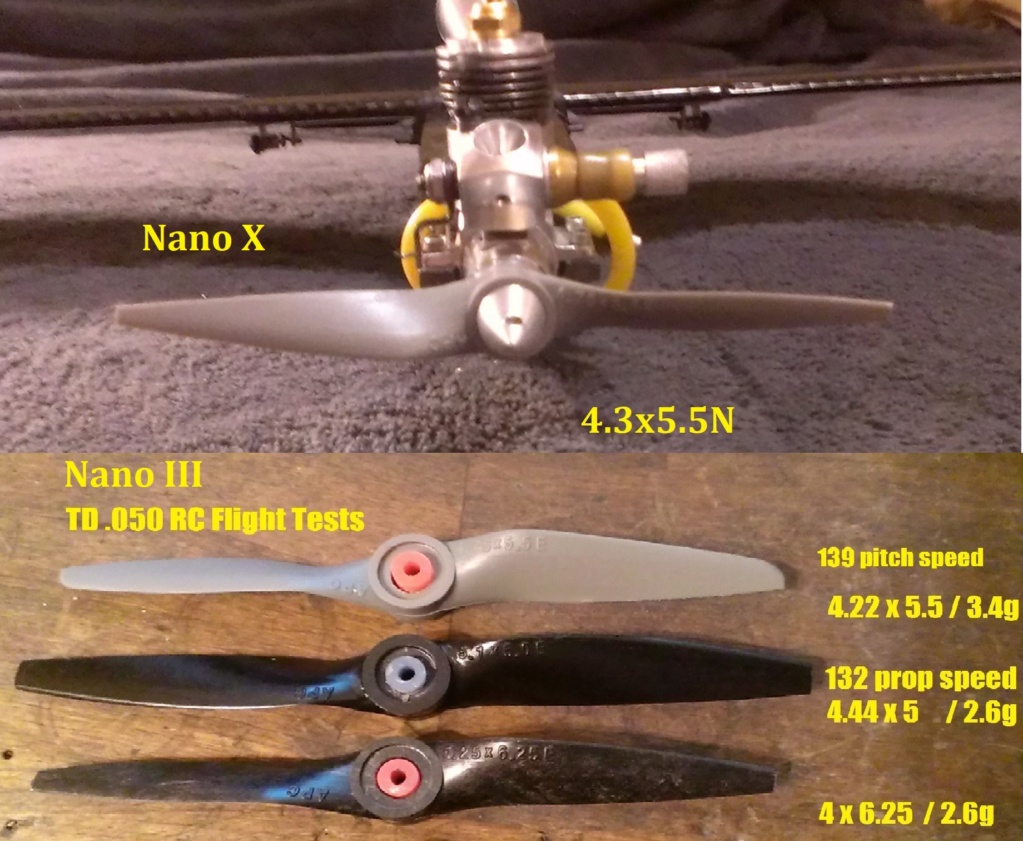 With my experience in quads, we found out the prop blast is not really a cone, in the sense that under each prop blade is a blast of air. This blast hits the quads arm and pushes down on it, this does introduce a vertical noise in the gyro (Z axis).

With this information and seeing the head on picture in your post, I would think there is a optimum prop rotation position, to use this blast off the prop straight into the venturi if timed correctly (when rotary valve is opening), to use as a form of supercharger. Maybe they already do this, but its a only team known secret or is it common knowledge now?

Just like I was zapping (~4000A pulse) ni-cd's (to lower internal resistance, too increase output voltage under load) before most anyone knew about it, was a real advantage before it was common knowledge.

Regarding doppler, I finally got the other program (Spectrogram version 5.0) to try out. Can you attach files in this forum, I can't find it? tia

it was fun to get out there to test fly the plane I am
looking forward to trying the next prop APC 4.3 x 5.5N will get some vid and post this weekend.

Thank you for posting a link to the other doppler software I have
downloaded the file will test it out!

The problem with the doppler program I posted a link to, is you need to select the high and low freq (kinda like wavescope), but you need to enter these freq in the excel program. The excel program is post #20 in the thread I linked to (4 posts above my post).

EDIT: I have tried the SpectroGram doppler program this morning. I like it, it seems to not have a issue (too low resolution) with the wind noise like waveoscope does for me. Waveoscope works fine when you have clean audio.

Also you can run the whole flight wav file and it does not complain it too big, then scroll along to look at each pass. Although you need to input the two freq into excel, you dont have to convert to mph (if that is what you want).

I simply put my cursor on the top line of the curve and read the freq, then the same for the bottom line (instead of left/right like waveoscope, its up/down).
Also you can semi zoom into the wave by adjusting file/parameters/change.

Here is same dirty wav signal in both programs for comparison. 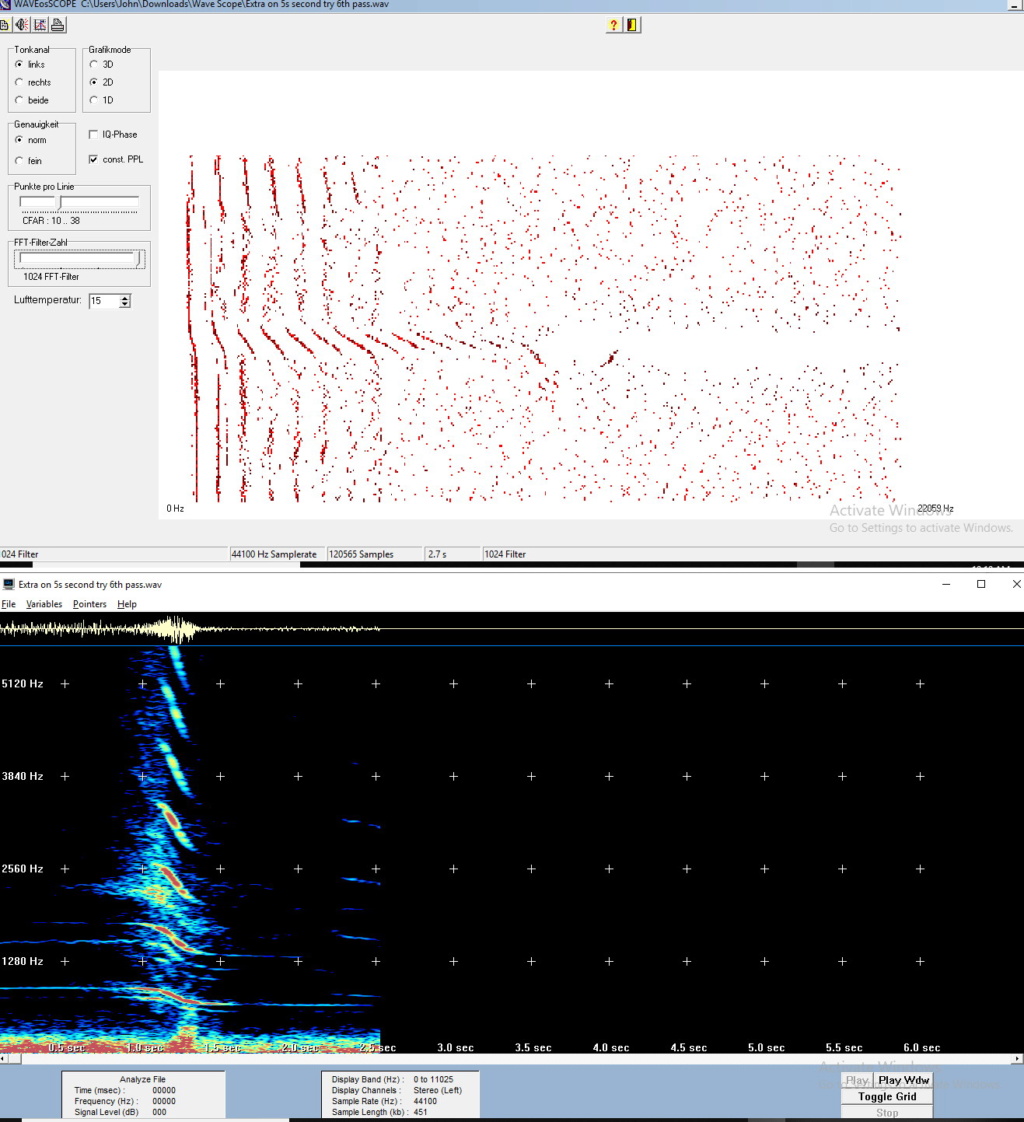 gkamysz wrote:...Zapped NiCd's, end to end soldering, and new fangled brushless sensorless 300USD ESC's.... I was at F5 worlds in San Diego in 2000.

I am guessing F5 is airplanes? I was on-road cars, I dont see san diego in the ifmar/roar list:
https://en.wikipedia.org/wiki/International_Federation_of_Model_Auto_Racing

I raced at the 1996 worlds in 12th and 10th scale, won many nationals, got 2nd at the yokomo worlds in 1999 (in slodans), then they became my primary sponsor, great company.

Regarding NiCd's, I saw a top driver secretly zap his 6cell NiCd pack on his 12V car battery, after 3 months of experimenting, I came up with a large cap bank charged to 55V, SCR to carry the current and zap each cell separately at ~4000A pulse, this was a secret for 3~4 years before the MFG's got a hold of it, then every pack was zapped. I raced for 21 years, then switched over to PC sim racing (NR2003/iRacing) for a decade.

F5 is electric aircraft. I built a zapper in 1998 maybe after seeing an article by Steve Neu I think.