yes, exactly as you advised, I chamfered the header entry.

Why do we use 140 for the timing here, instead of the 160 used in the earlier formula? Even if SPI, the exhaust timing remains the same as in a non-SPI cylinder??

I also noted, that the Kyosho muffler may not allow the cylinder thread to fully bottom out in the crankcase, and it may slightly reduce the compression ratio to some extent, albeit not so much that would justify the limping of the engine well below 20k. I did not want to force the cylinder to fully screw in against the Kyosho muffler, but will see if repeated spanning of the cylinder will cause the aluminum header to yield/wear some and the components will finally settle..

That was an example using another engine, you must know timing per engine type.
TD timing is typically 140 degrees, but can vary between 140 - 145

For the cylinder mark location when it seats without the manifold on.
Can very carefully flat sand the manifold - adjusted / small amounts or
you risk loss of a tight seal. Set the manifold tight just before the marked location.
Or allow it to wear in Kyosho did the right thing
to have it a bit off to insure all engines seal the manifold.

Forget your poor results with the wrong prop.

How many head shims are you using?

Thanks Brad. Will check if I have the exact same props hou mentioned. I use 1 shim only but suspect that the cylinder does not bottom out. However I will look at the exact position through the cylinder top before and after the Kyosho is added.

Yes good to know just where the cylinder is at, 1 shim is good to make up for the variance.
With the plug off you can check the deck height with one shim. 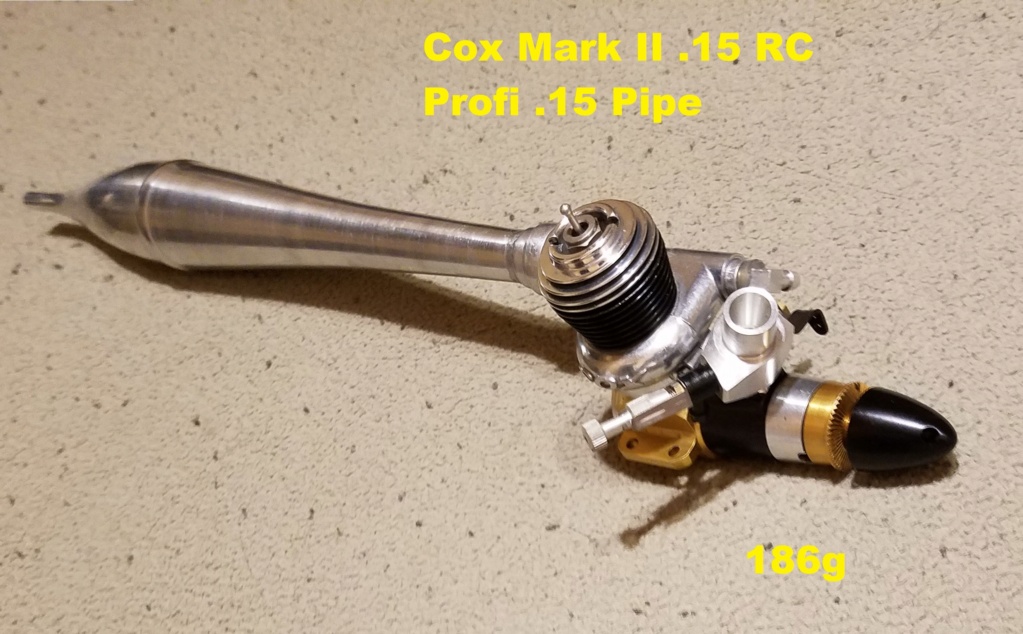 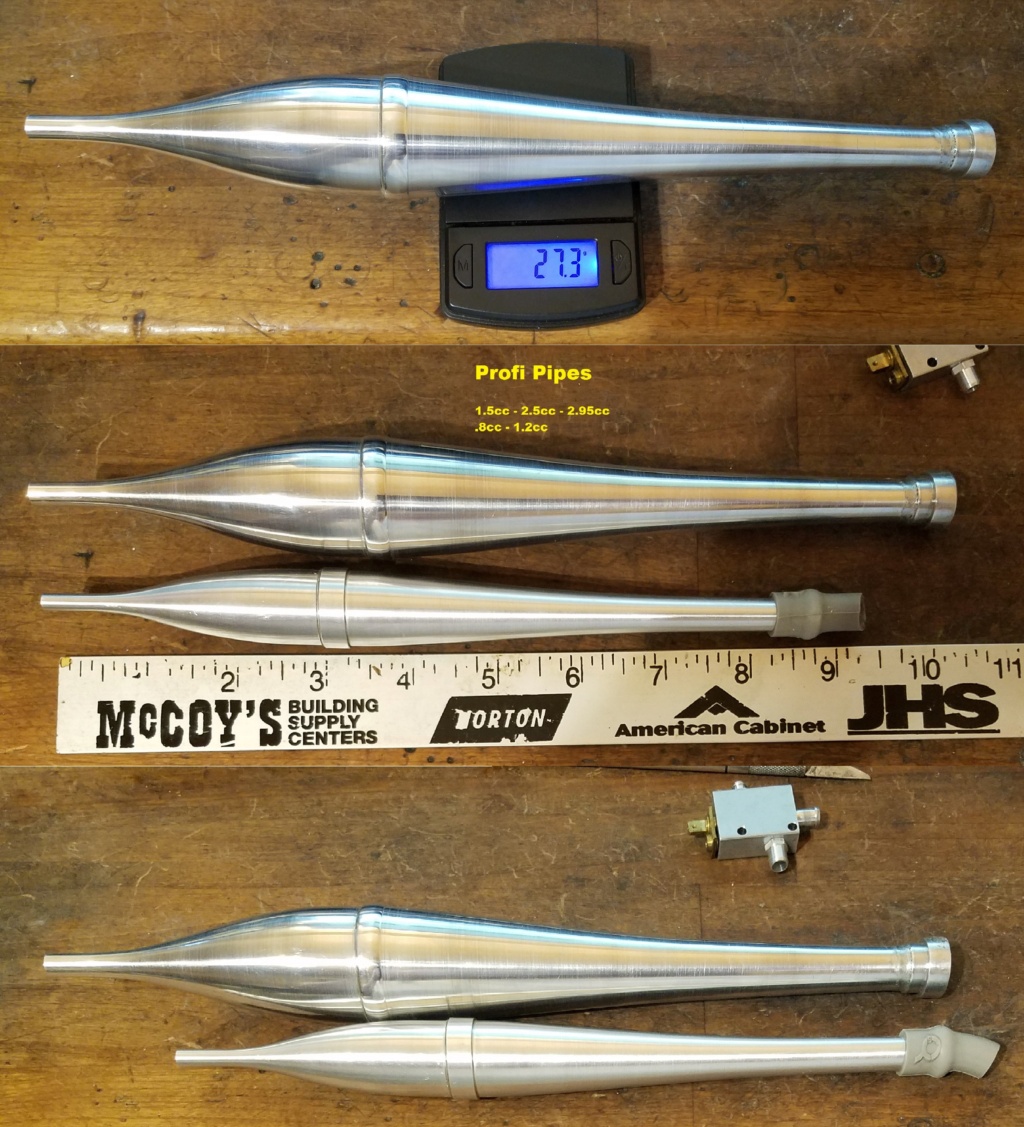 Kamtechnik Nelson Plug Turbo Plug Adapters has been tested and now
the web site has been updated with new product slots opening up soon
to have stock in hand perhaps by this week.

All the .020 turbo heads sold out already

totally missed out on the first batch.

I guess the out of stock on his website means the stock has not been filled yet...Greg wrote in a post here that he just starts the 020 and 090 turbo head serial production after the prototypes tested well.

Now that the magic dust has been applied to the Cox.020 displacement Greg
is going into mill time and is willing  to sort out an adapter replacement for the VA .020.
Extra power will likely be had by following the current .020 chamber design.
Best rpm sticking to two shims with the APC 4.2x2 each engine will be a
bit different in shim count older engines will only need 1 shim.

Some of my findings during testing:
Compression volume is not the only factor once a given ratio is found,
chamber shape improves and squeaks out further power. The number of
samples tested and those modified helped to sniff out which direction to
go keeping perseverance alive and suitable use of the prototypes around
14 in total. The cox 4.5x2 is a real challenge to hit 19k some engine out
of the box can hit that number, 20k static is possible with further efforts
to improve the timing / deck height of the piston. The crank window can
be sharpened on the rotation side to improve intake.

What mattered beyond compression ratio,
-Proximity of the element to piston face
-Transition shape from shim line to plug face
-Charge concentration across a given percentage of the piston face / what best serves the load of the 4.5x2
-Improvements by sound distinction / variances the adapter shape makes / loud, hollow thru peaky sharp notes.
-Full spread vs narrow concentration of force pressure to piston face, horn, cone and bowl shape diameters all
have their attributes. Providing enough spread to counter the load leaves the rest of blast rate to focus on ramping
up best possible time / rpm.


I am looking forward to testing speed props with the product adapter.
So far with a previous prototype modified for suitable use:


This is J4 the one that has finally brought out the last bit of rpm out of the test
engine. It has been widely used for all the prototypes. A fresh piston cylinder
with good seal will likely hit 19k + Shown with a Cox grey 4.5x2 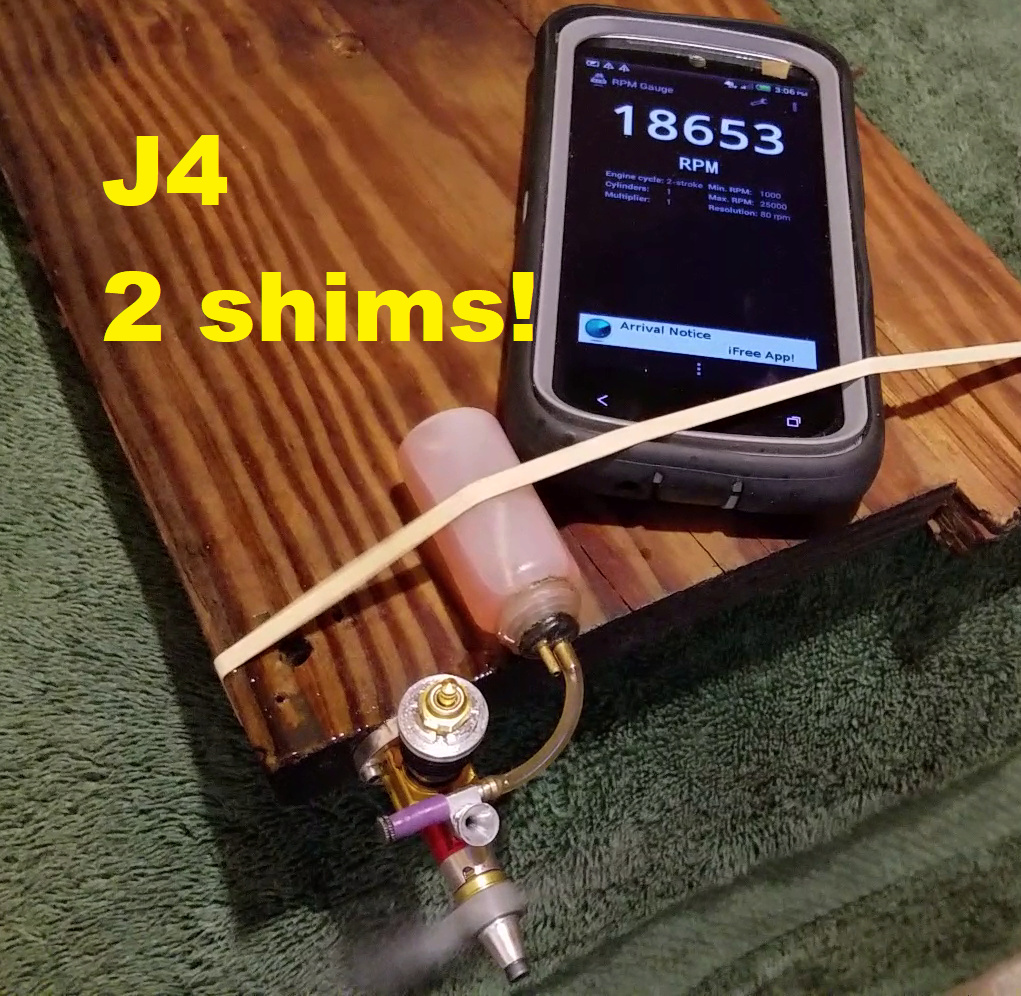 First off The Pipes look really Good for the Mark .15 that should bee interesting ,, The TD .020 was screaming !!! Thats cool the hd. will bee avaible soon Thanks for letting us Know

Thank you Gents looks like the ball is rolling again!
I was given 4 items in the last package sent to finalize, 3 down one more to test.

Some good ole goo control to help keep .020 projects cleaner and it adds a bit of
back pressure for RC carbs. Fit is important for a leak free seal.  I have documented
results with this engine prop and will see what the difference is in rpm with only
the manifold header add. 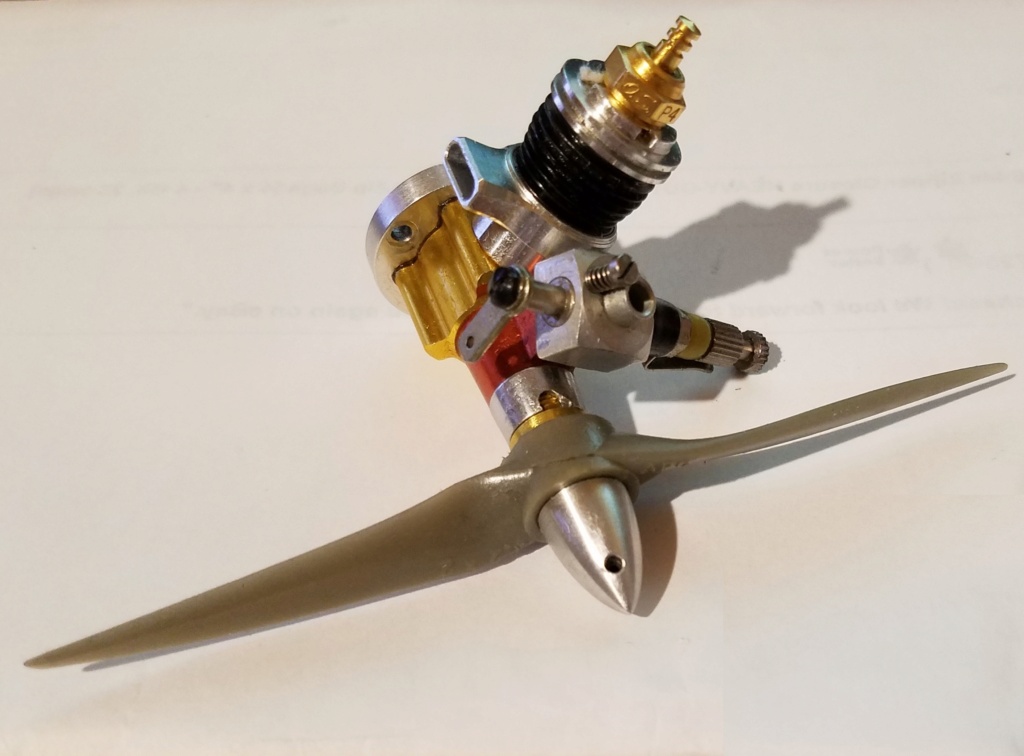 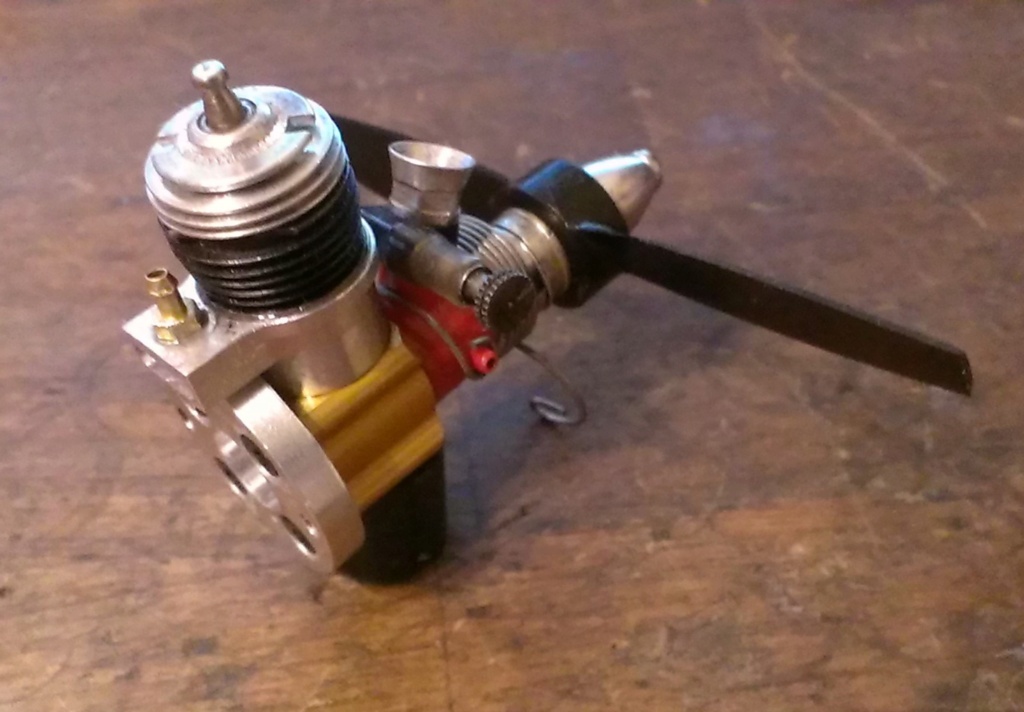 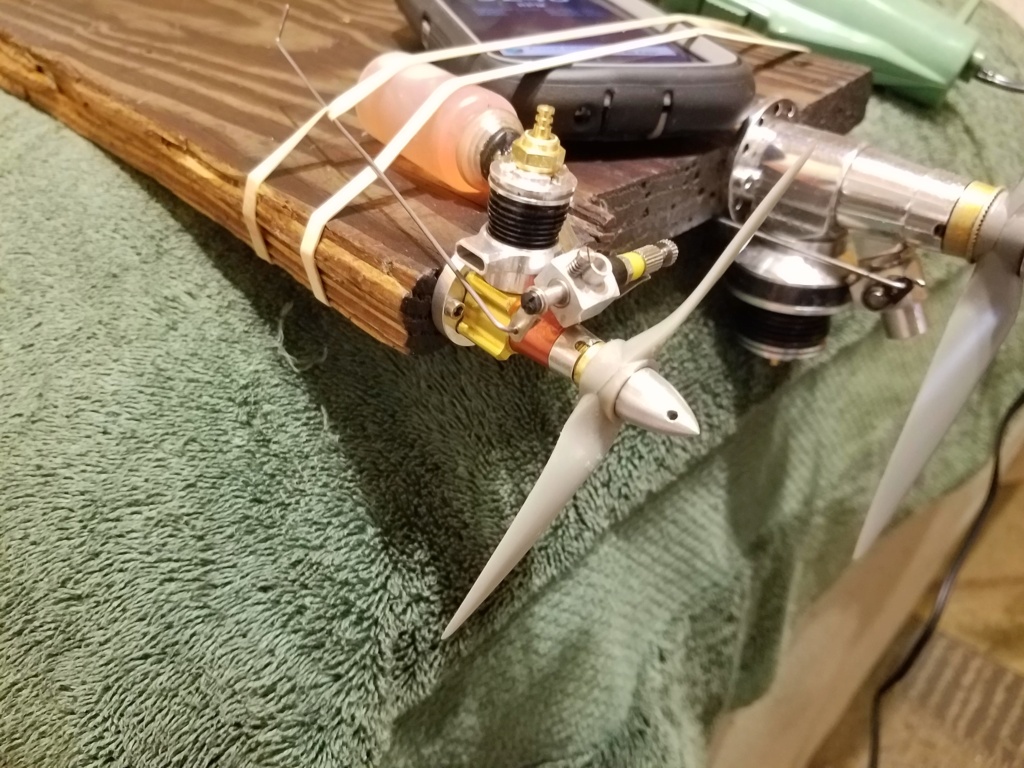 Bump to an old thread, 1/2A nut I ran across this thread looking for a cool airplane to build for an 049. I have been into RC since the early 2000s and started out with a cox 049 to pull my glider up. Never played with them much since then, but I recently came across some more 049s and would like to build something around them. Your speedsters here are too cool, I love fast planes - keeps me from getting bored (I used to do pylon racing). Just amazing how fast these little ones you've built are. Most of the discussion here has been the 020 and 010, do you have a specific design you recommend for 049? Would like to leverage your expertise a bit if possible to build something fast and cool... looks like you're using 1/32 ply for the fuse and solid balsa wings? Thanks for any direction you can give, I'll keep digging through posts on here... 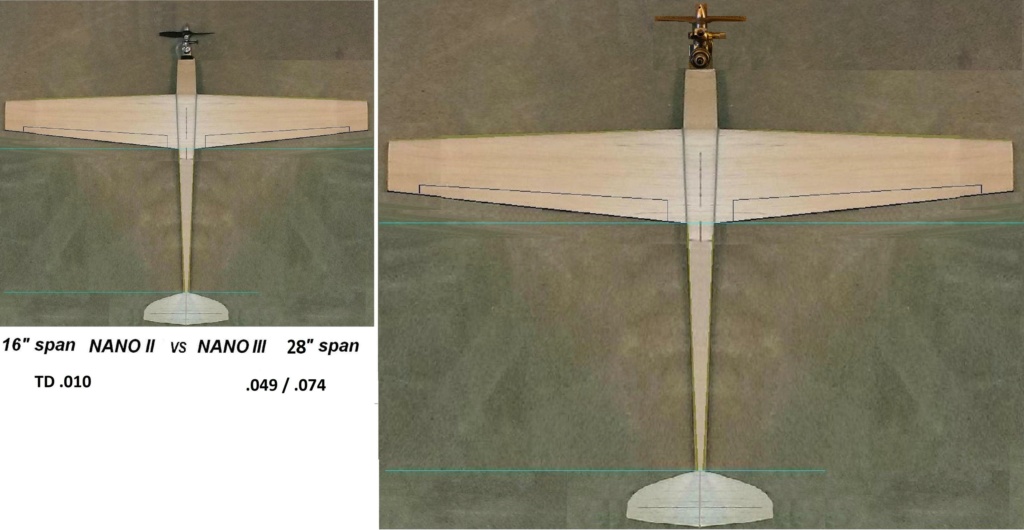 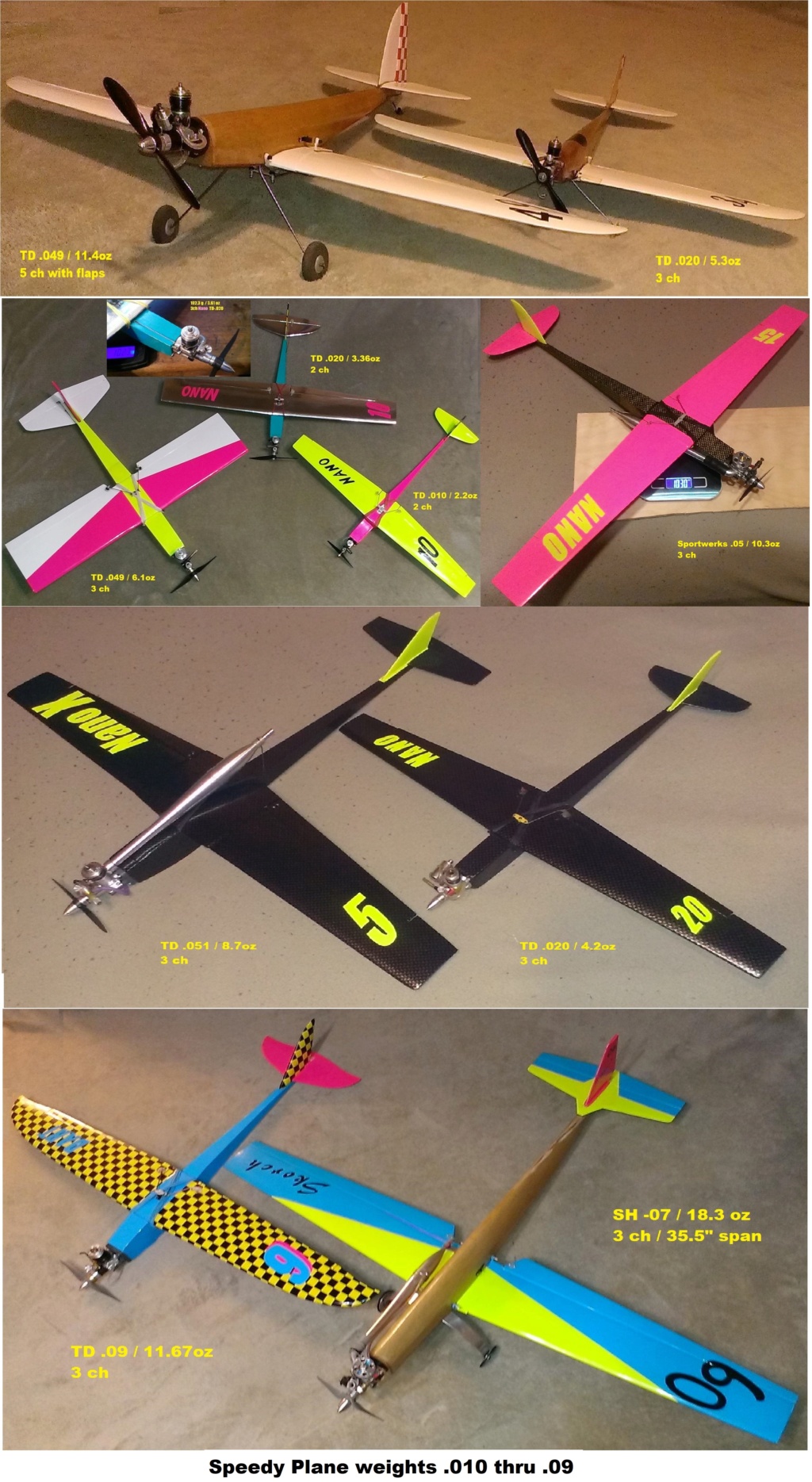 Thanks for the thread links, I think I've found most the stuff I need. Drew the templates out in AutoCAD tonight, gonna order some of the airfoil balsa. What do you make the tail feathers out of, 1/8" balsa? Also what prop do you like to start with? I notice you mostly use the tee dee style cox engines, the ones I have here have the integral fuel tank. I remember the teedee style had more power but hopefully this will still make it go pretty good

.020 version was reproduced by a Jordan Kearney- from New Zealand 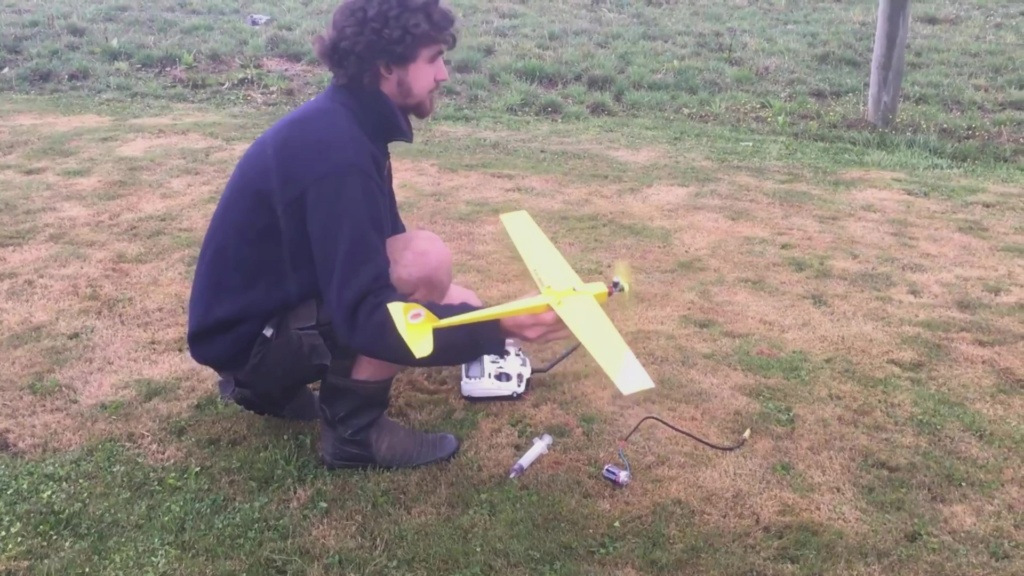 
Notes from Jordan:
This one does has a spruce leading edge and it’s covered in heavy ultracote, still it
comes in at 3.42 oz dry + a 5.5cc tank. I use digital high voltage servos so I can run
them directly from a 2s 180mah lipo. Also the fuse is 1/16 quarter grain balsa with
1/64 ply doubled along the sides from the engine mount to just past the trailing edge.

Again, thanks for the info. Got the fuse sides cut out and the tail feathers made up. How do you do the hinges? I was thinking to do some real light glass cloth to make a skin hinge. Maybe monokote alone is enough for a hinge?

Nice little racer for an .020.
I would loose sight of that plane so fast it would still have 7/8 of a full tank after the crash.

I simply cover the bottom with up elevator then cover the top with down elevator.
Once done you have full movement no gaps easy clean up after a run. 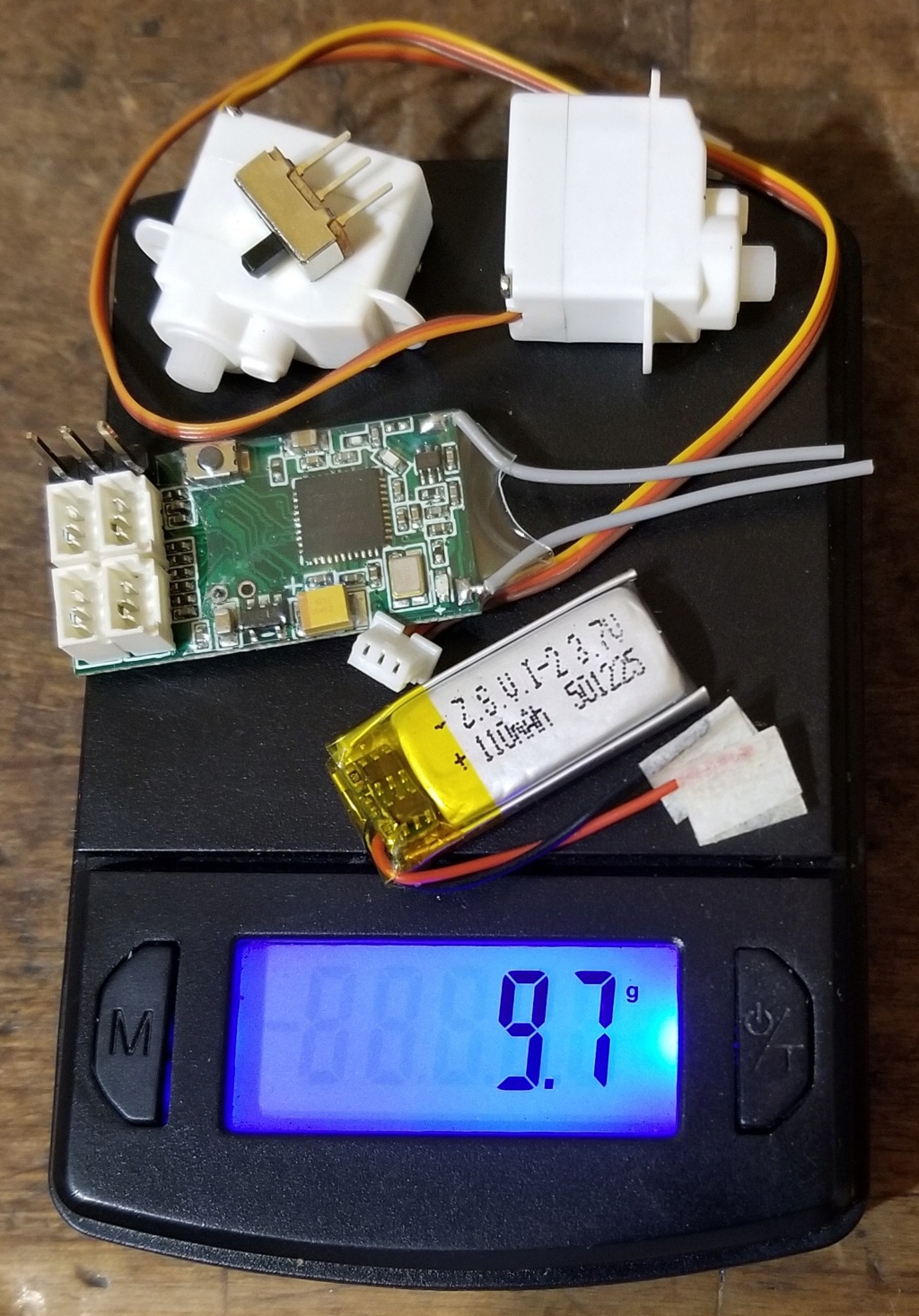 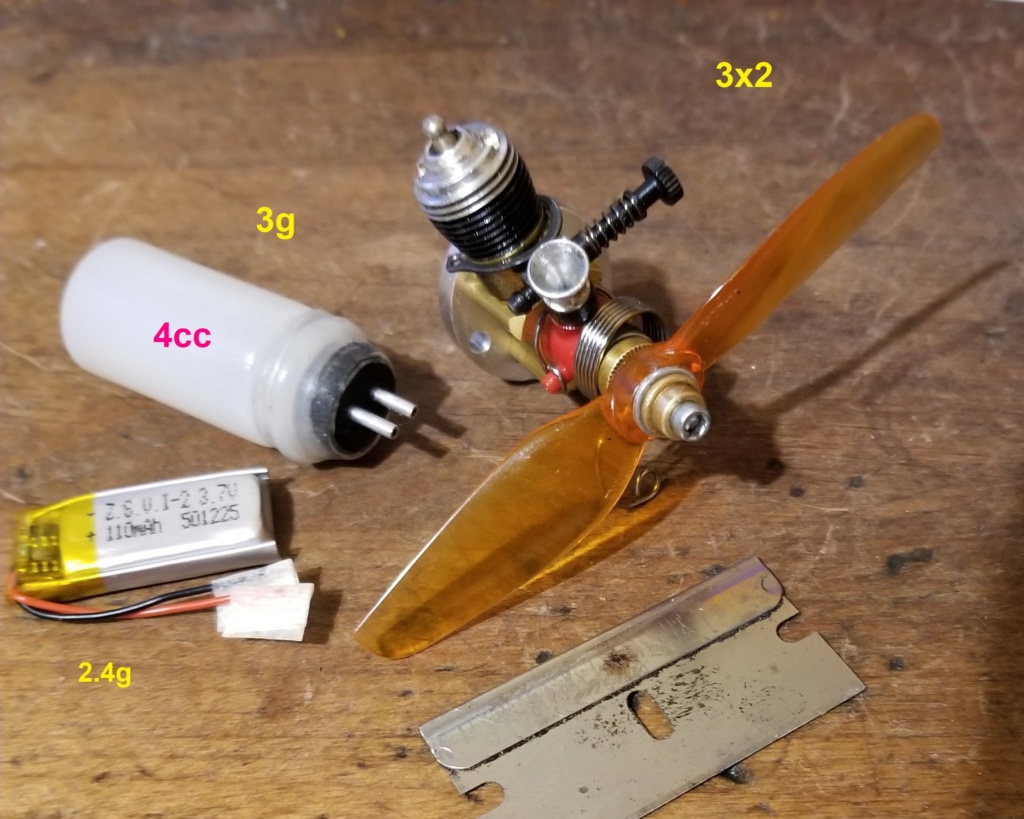 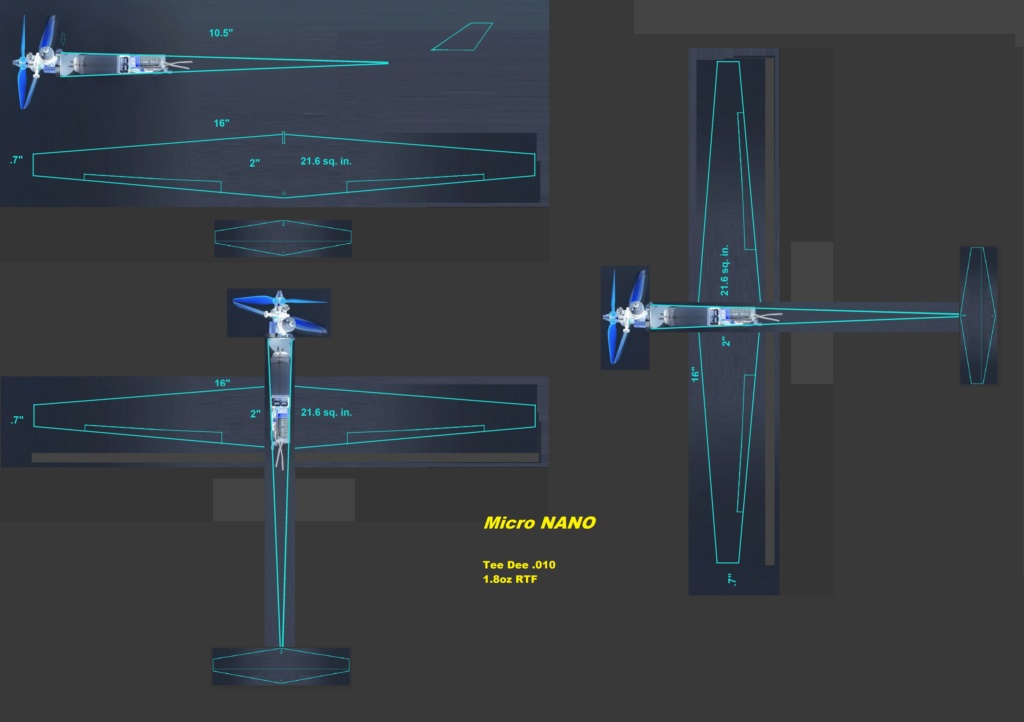 That is so cool! Where did you find the transparent propeller? And what speed have you achieved with this latest iteration?

I have been collecting gear for the next TD .010 project.
Testing HQ T series props etc. Will post build pics and flight
vid per the norm when it happens. These props are not for
straight line speeds / good sport flying with more speed than
a stock prop. 2.56x4 gets down wind over 140 mph pitch
speed with the last Nano design. The 4cc tank dia. is less
than the previous 7cc tank used with the last project. Less
weight and allows a smaller fuselage. 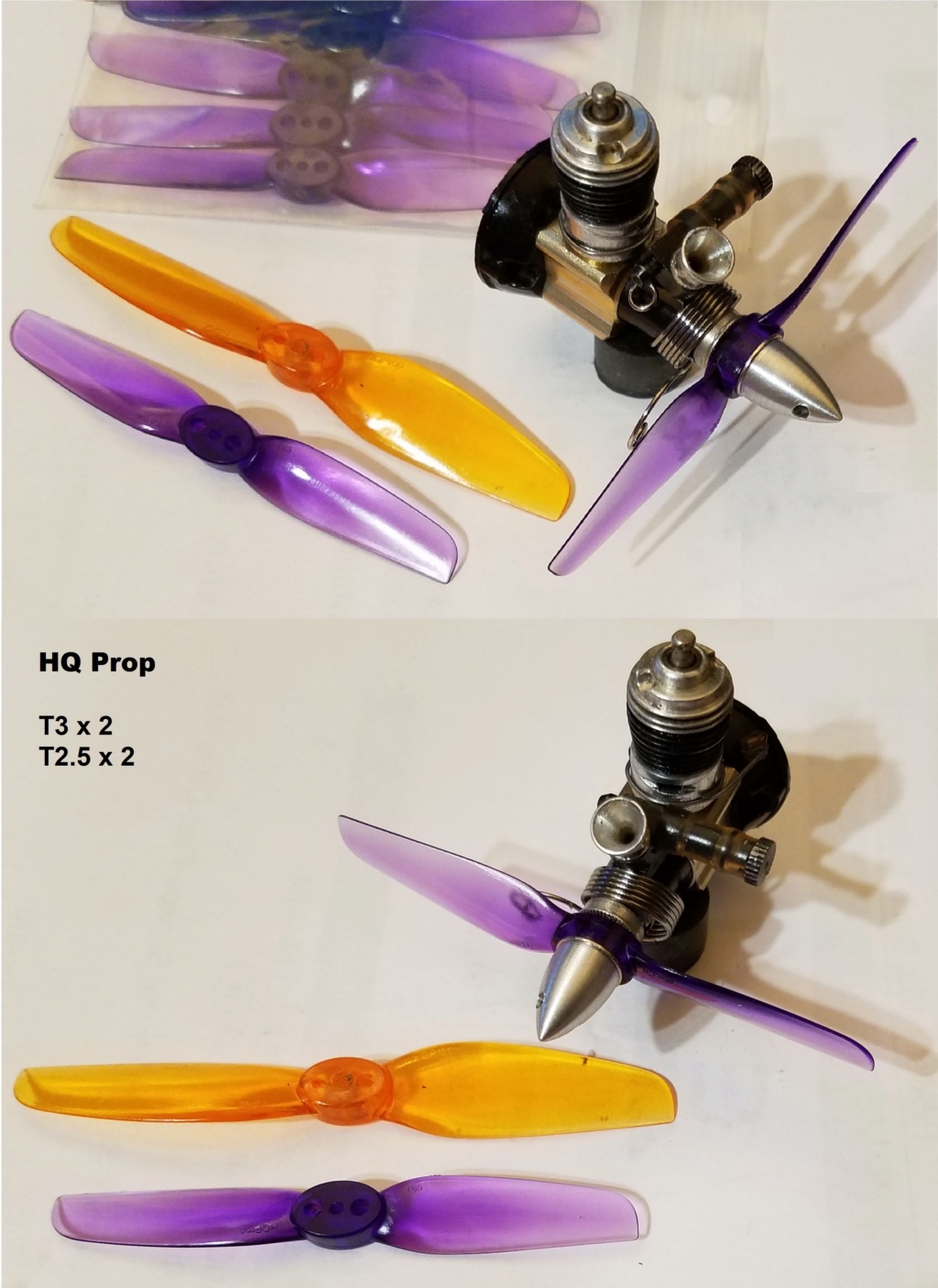