Log in
Search
Latest topics
» Stuka parts...
by getback Today at 7:43 am

Hi all it's been a long time since I've uploaded a report of any type so I'm going to rectify that!

This report going to be different from my norm since it has no C/L in it unforchantly this is due to unfavorable wind conditions.
Instead it involves my recently completed Great Planes  F1 Rocket.

Saturday:
I arrived at the field around 2:30pm with my P40 and F1 Rocket in tow but after checking the wind conditions (the wind sock was pointing straight out and swinging in circles) I decided to bypass the circle and head to the RC part of the field and setup my rocket (Plane not the mach busting straight up type) and try to wait till the wind calmed enough to get it's first flight in. With new never flown RC models, I prefer a light to medium head wind which helps ease take off a bit as well as landings and with a high speed low drag model like the rocket believe me it helps while you are getting used to it.

While i was waiting on the wind to cooperate, I took the liberty to do a final extensive pre-flight check of the model by checking the control throws, making sure the transmitter was set and programmed correctly, Receiver battery was charged, balance etc then finally doing a range check (VERY IMPORTANT don't ever skip the range check!) I then sat back and waited. It wasn't till 6:45pm that the wind calmed down enough to fly so I rigged up the rocket and set it on the run up stand then fueled it up with 10% omega and preset the NV to be a little rich for the flight since the OS had only two tanks of fuel through it and it was going to be run "in cowl" which makes for more heat than an engine that's in open air. After setting the NV for a basic setup, I primed it and attached the igniter and bumped it over and it started on the first bump! I cleared it out and set the NV a little more then carried it to the flight line which was totally vacant (No one was there) then set it down. I then proceeded with some Taxi tests to test the sensitivity and and ground handling which I found to be surprisingly easy for such a small high powered model since P factor in models this small with this much power usually can make things interesting. I did a few tail up fast taxi's to check rudder effectiveness and again found that the model only required a bump of right rudder to get it going straight down the runway (note)Don't jam the throttle to the firewall on takeoff or this model will do an impressive about face (ground loop) with a real possibility of a cart wheel Just gradually advance the throttle and you'll have no problems. Anyway with ground testing out of the way, I brought it back and topped off the tank then restarted it and right back out to the line it went. I taxied to my favorite starting point on the runway and with up elevator applied to keep the tail on the ground I advanced the throttle, letting up elevator as speed increased to allow the tail to come up and used the rudder to keep er straight and off she went, this is where some P factor came into play since it required some right rudder to keep it straight as it climbed but went away as it gained airspeed once I was at altitude I went to trimming since it had a tendency to dive and roll to the right. Took 8 clicks up and 4 clicks left aileron trim to get er flying straight (Was still slightly nose heavy and had made a rigging mistake on an aileron)
I used the flight to gain a basic feel of the model and since the engine was still slightly tight I avoided any maneuvers besides a roll and a split S to keep the loads down on the engine. Finally It was time to land so I set up for the landing and pulled the power back to just above idle to keep some power on it to control decent  and brought er in. and is it fast, the rocket wants to come in hot so I had to utilize a high performance flat approach to bleed off airspeed but once i got er slowed down and into ground effect she settled right in for a nice landing but a little word of caution this model comes down when you want it and when you don't want it too if you are not careful so care must be taken to keep the speed up don't get it too slow again it's a fast clean airplane so you got to fly it like a fast airplane.

I taxied back to the line and shut er down and since it was getting late I decided to pack it up, take it home and do the changes.

Sunday:
Was even more windy "18mph+" but was straight down the runway so i decided to set up the rocket bearing the new changes and fly. Again, like saturday, I inspected it rigged it up then fueled it and fired it up then took er to the runway. I taxied it to my spot and let er rip...gradually. This flight required me to relax the trim to two clicks on the elevator which was much better so i flew er around putting er through then paces. i also slightly leaned er out a little more to to gain a little more power which got er flying a good bit faster over 100 mph than the initial flight Saturday. boy is this plane fun to fly. It is also fully aerobatic and has a totally ballistic snap-roll which finishes with an end over end tumble, very interesting just don't do it to low. The landing however is where I ran into a problem. The elevator trim suddenly changed causing a dive which I promptly caught but made for an interesting landing which resulted in a bounce but no damage. Upon inspection, I found that a hunk of weight broke free and migrated to the front, screwing up the CG, easy fix once i fished it out. once fixed, I fueled it back up and flew it again finding the problem fixed. Flew the tank out with rolls, loops horizontal eights (Yes I tried a C/L maneuver and found it did it very well just at 100+mph) The landing was uneventful and i greased er in for the landing. I flew er several more times finding the wind didn't bother the rocket too much, It was rough sure but did surprisingly well for such a small model, nice model to fly on windy days. the day ended with almost a whole gallon of fuel burnt up and a nicely setup model and the engine is really starting to come into it's own it's twisting a 12x6 now and I expect it to be fully broken in within the next half gallon.

I hope you enjoyed this Report while it's not C/L it's still fun!

Here are a couple of pics, i have a video but due to a Gnat yup a Gnat the video didn't come out well. Mr gnat was on the lense and the camera was trying to focus on the gnat blurring out the flight >_<
anyway enjoy! (Bandit) 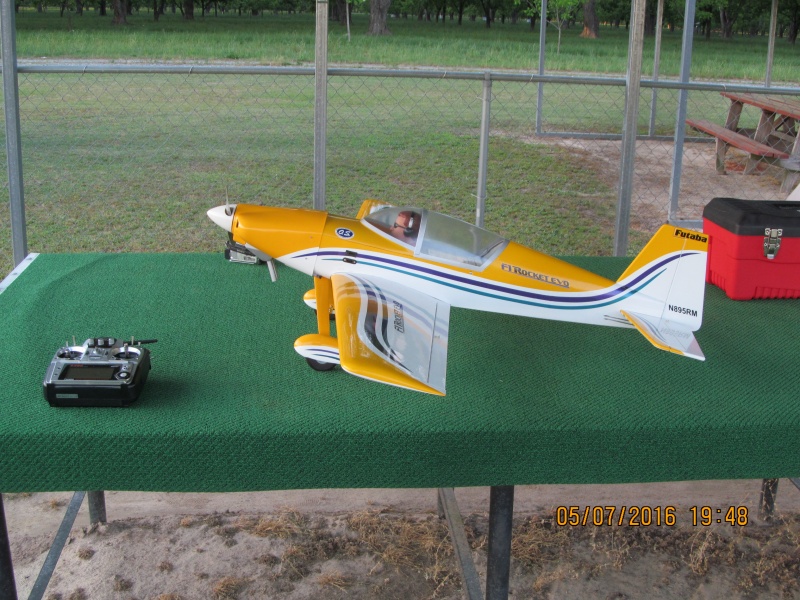 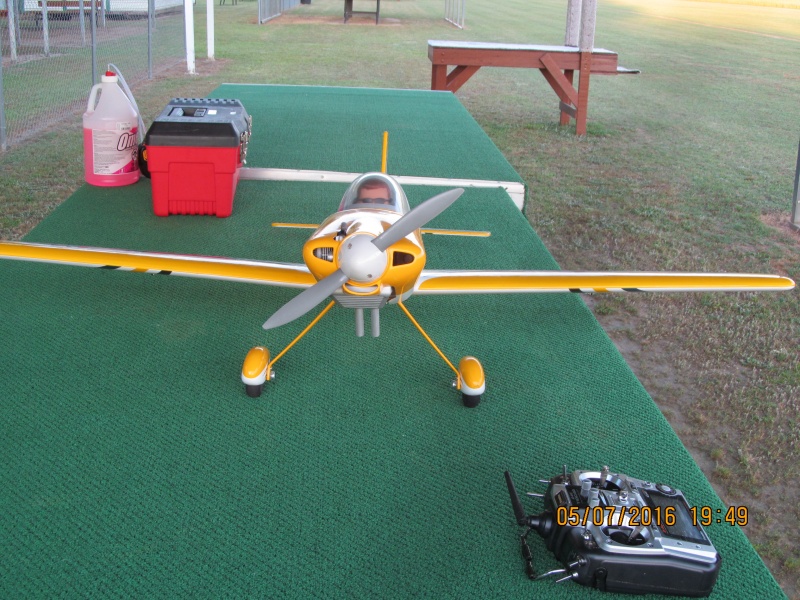 Shame about the video but I like to hear (and see) about everybody's flying experiences no matter what category.

I admire the confidence to fly when it is windy - 18+ mph and I wouldn't dare. My reactions are not fast enough and I fly in a fairly confined area. A gust of wind can induce tree climbing.

That is a very nice looking model and when you have it fully trimmed out, it will be more than awesome.

ian1954 wrote:Shame about the video but I like to hear (and see) about everybody's  flying experiences no matter what category.

I admire the confidence to fly when it is windy - 18+ mph and I wouldn't dare. My reactions are not fast enough and I fly in a fairly confined area. A gust of wind can induce tree climbing.

That is a very nice looking model and when you have it fully trimmed out, it will be more than awesome.

Thanks! The model has great wind penetration which was surprising for a model of it's size. On my next outing I'll try and get a better video since the previous one didn't come out at all due to a certain insect on the lens.
It's getting to the point that im going to have to get a better video camera. I currently have a Sony Handycam SR68 which is an older HDD equipped camera it's resolution isn't quite as good for this type of videoing.
(Bandit)

WTG RC is mucho fun you get to fly anywhere in the sky zero limitations. Bummer about the dang nat!!!
You can audio tach the plane for a base line reading check it with some online software.